If you’ve been gaming in any capacity for the past decade you’ve no doubt played one of TT Games’ Lego-branded licensed adventures. Like clockwork, the company has pushed out at least one game every year since 2005, usually with the same basic mechanics and structure. Unfortunately, they quickly became hit-or-miss, with more than a few being bare-bones rehashes of movie plots with little else going on.

That’s why 2013’s Lego Marvel Super Heroes was such a surprise to me. While on the surface it seemed like the latest media product to cash in on the Marvel Cinematic Universe hype post-Avengers, at its core it was a celebration and tribute to decades worth of comic books, movies, cartoons and more. The creativity shown throughout was refreshing, with plenty of villains to take down and obscure characters to meet on the way.

Disappointingly, TT Games fell back into old habits with the spiritual followup, Lego Marvel’s Avengers, in 2016. Stories and dialogue ripped directly from the movies were back in full force, with most of the classic fan-service being relegated to side missions in a more mundane Manhattan.

I figured that was going to be the future of Marvel and Lego’s collaborations, but I was wrong. Announced earlier this year, Lego Marvel Super Heroes 2 is a much more liberal take on over half a century of popular culture. The question is: does it deliver?

Mechanically speaking, Marvel Super Heroes 2 is the “same old” Lego formula once again, with very few tweaks. Combat is still mostly button mashing with the option for finishers once a gauge fills up, while levels still involve busting up all of the furniture to score some sweet Lego studs to purchase characters later. You’re also barely punished for dying — your character loses a few studs but then you’re back in the fight, right where you perished. Personally, this doesn’t bother me, but I can see some players wanting a greater challenge. 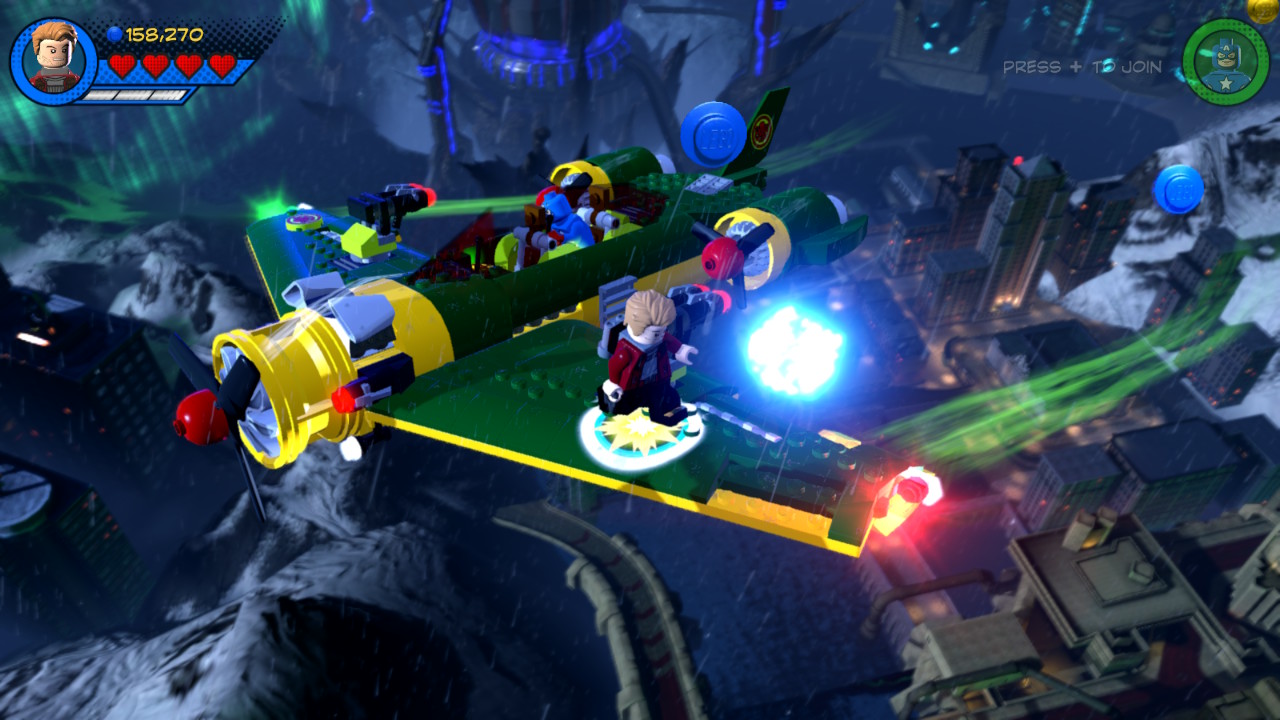 While the mechanics can seem like a tired hold-over, the levels themselves more often than not make up for it. Few of them simply rely on you walking to the right and solving occasional puzzles, like previous Lego games. Instead, you might find yourself in Dr. Strange’s mansion, rewinding time to uncover secret passages, or busting your way through a Hydra blimp before taking down Baron Zemo in a bi-plane. These levels are also mercifully short compared to prior slogs, rarely overstaying their welcome aside from some bosses with far too much health.

As is Lego tradition, you’re also unable to 100% a level on your first go; you must instead return later in Free Play mode to utilize the wide array of abilities offered by different heroes. Thanks to the aforementioned brevity, however, it isn’t as much of a chore as it could be.

For the True Believers

Despite not being a heavy reader of comic books, they have always fascinated me, especially the weirder ones. I’ve spent an embarrassing amount of time reading up on characters like Throg (a man who was turned into a frog who then inherits the power of Mjolnir), Hellcow (a vampiric cow) and, naturally, Howard the Duck. To my surprise, all three of those are in Marvel Super Heroes 2, each with their own unique side quest to unlock them. Hellcow even teams up with a Wesley Snipes-inspired Blade! Not every character has one of these overworld side quests, but there are enough to keep exploration engaging. 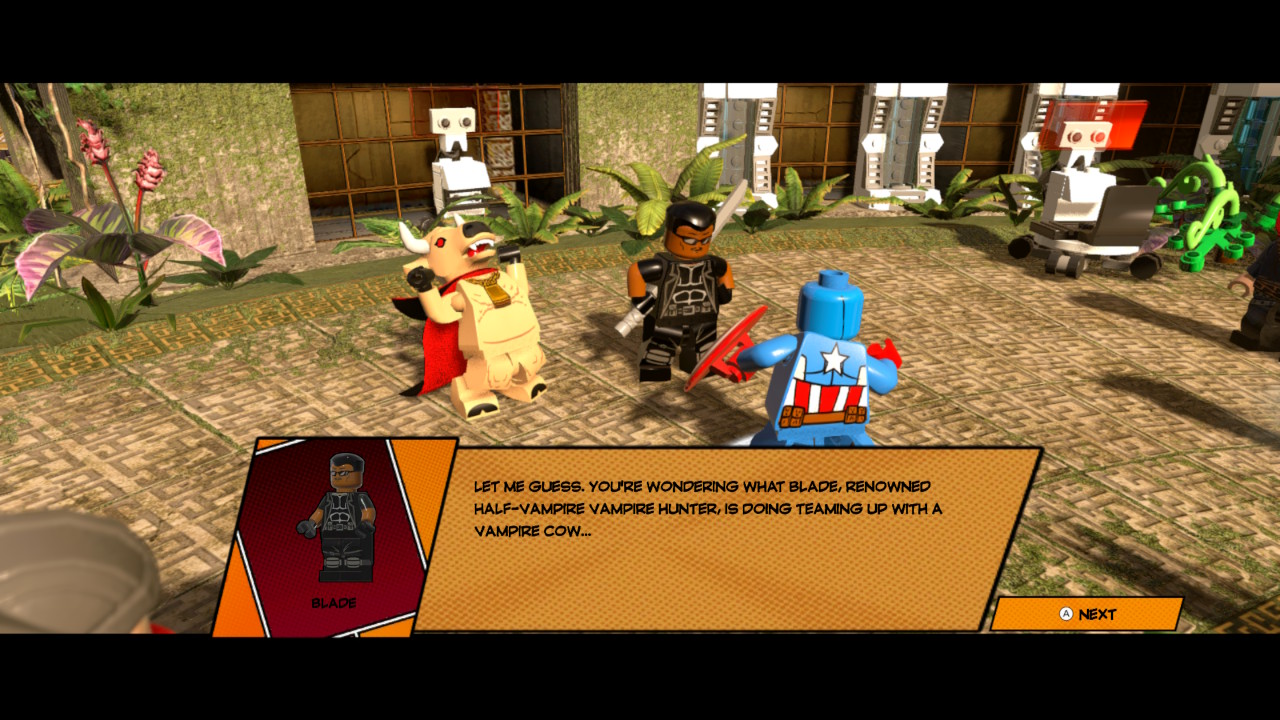 And what an overworld it is. The core concept of the story this time around is that the nefarious Kang the Conqueror has merged realities to form his own domain: Kangopolis. This means you’ll find Medieval England sandwiched between 2099’s Nueva York and Wakanda, while Egypt and Asgard are a short jaunt away. This is how the instanced levels themselves can be so refreshing, with characters being mashed up with entirely unfamiliar environments. In one part, for example, the Guardians of the Galaxy find themselves in the Wild West and Starlord has to fight his way through a circus train alongside the long-forgotten Kid Colt.

On top of the core levels you also unlock special missions, hosted by the ever-sarcastic Gwenpool filling the role of Deadpool from the first game (for reasons I’ll get to later.) These are generally quite short but are somehow even more lighthearted than the main story, with you cleaning up Central Park as Squirrel Girl or playing as Venom and Carnage as they come to terms with themselves. 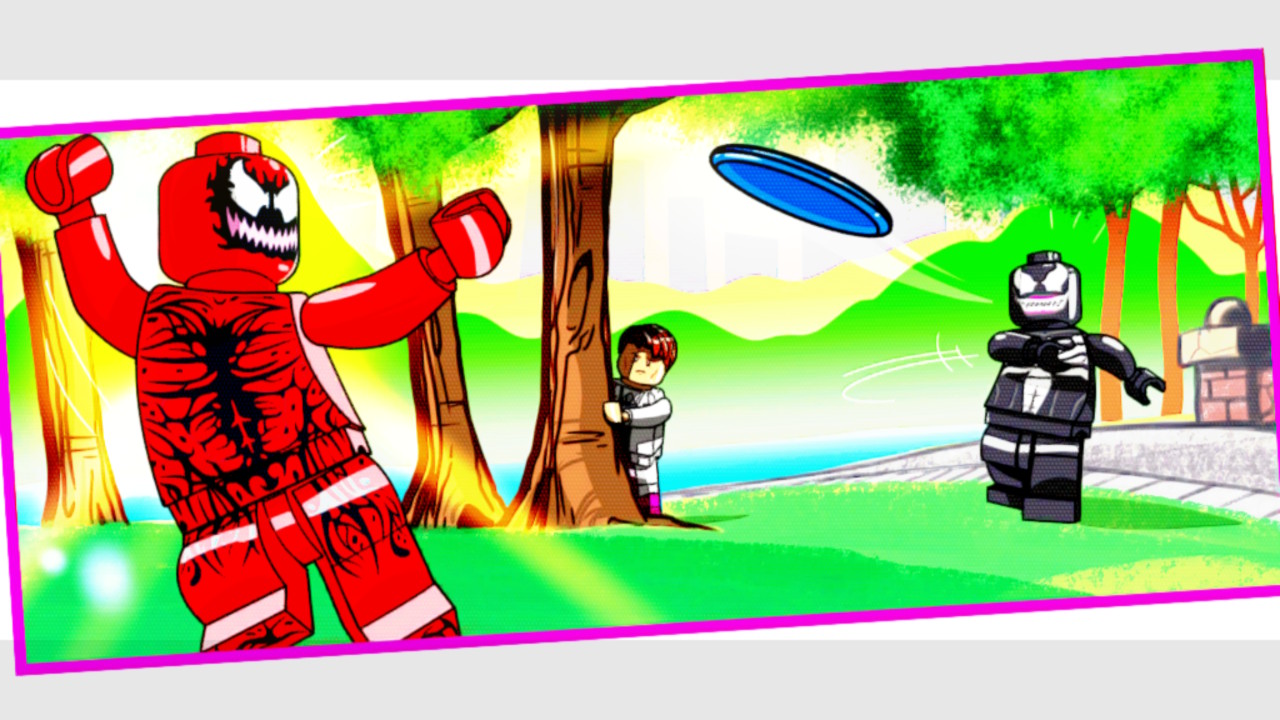 The game also shines the spotlight on characters who aren’t huge stars thanks to the movies yet, from Ms. Marvel to She-Hulk. While this may be daunting or confusing to those unfamiliar, the game smartly offers up brief bios you can access on the back of the character’s “trading card” via the main menu. The likes of Iron Man and Captain America are sparsely used in comparison, and the story is all the better for it. That said, there are quite a few notable omissions…

Days of Future Past

Lego Marvel Super Heroes 2 does not feature any X-Men. Nor does it feature the Fantastic Four. At this point, it’s a pretty badly kept secret that Disney has held back major promotion of those two properties due to them not owning the film rights, something also reflected in Marvel vs. Capcom Infinite earlier this year. Considering the first Lego Marvel game featured major roles from the likes of Professor X and the Human Torch, it’s hard to ignore.

That said, TT Games managed to work in a few cute references to their omission, like the heroes alluding to Galactus as the last purple villain they took down as well as the aforementioned Gwenpool. Hopefully with rumors of Disney’s restrictions being lessened, these iconic characters can be added into the game with the sizable post-launch DLC support that has been promised.

Until then, you can try to make do with the game’s surprisingly robust character creator. Simply head on over to the Avenger’s Mansion and you can mix-and-match various parts from characters you’ve unlocked, equip skills to different buttons and more. Here’s my example, the copyright avoiding Weapon Z himself: Mulverine! 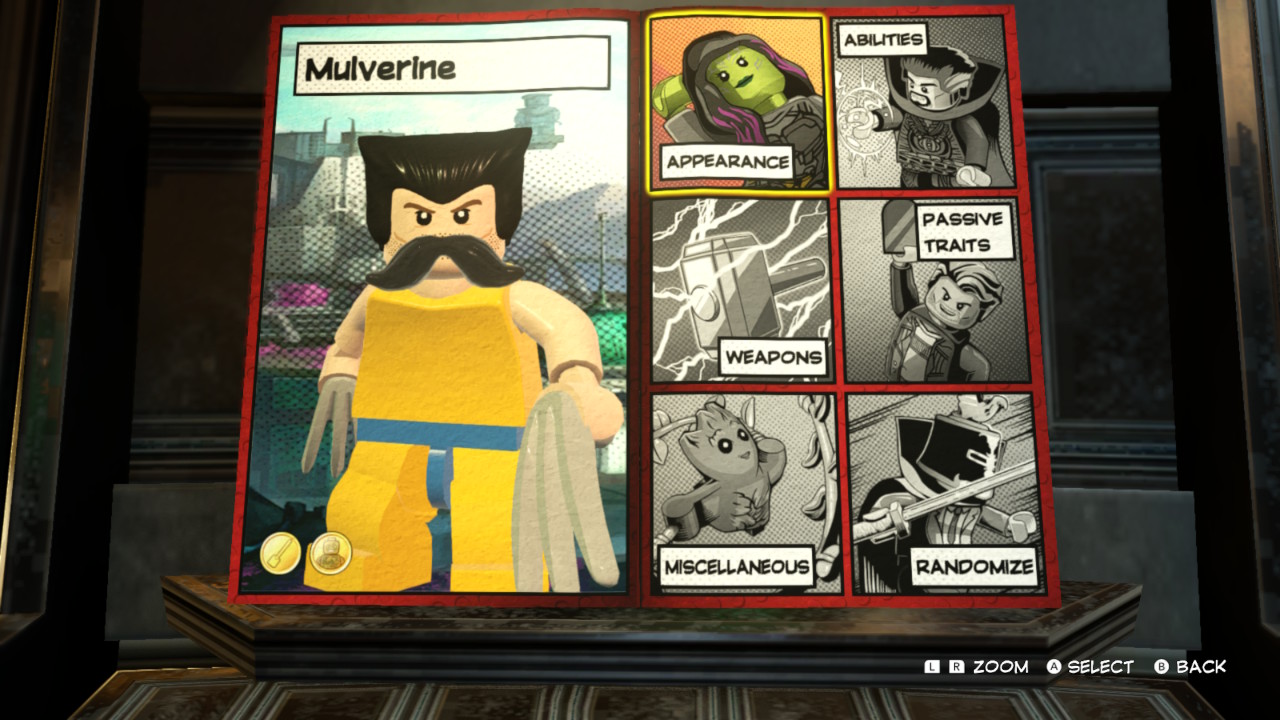 The Avenger’s Mansion also hosts one of the game’s other additions: a four player multiplayer mode. In this, you and three others, be they CPU or friends, battle it out in various minigames such as a variant of capture the flag. While this mode is fun in theory, the button mash-y and floaty controls of the main game don’t translate well to a competitive setting, so it’s hard to see this section becoming a staple of anyone’s multiplayer gaming time.

Of course, like most Lego games, the entire thing can be played in co-op locally with two players, something which is made even easier by the Switch Joy-Con.

I played all of Lego Marvel Super Heroes 2 on the Nintendo Switch after primarily playing other Lego games on PC or PS4 and, comparatively, performance on Nintendo’s new system is spotty to say the least. While the individual levels hold up surprisingly well, even pulling off beautiful lighting effects and vistas at times, the overworld, with all of its intricate pieces, can really tank the frame rate. It’s even worse in handheld mode, with the lower resolution resulting in a blurrier appearance overall. 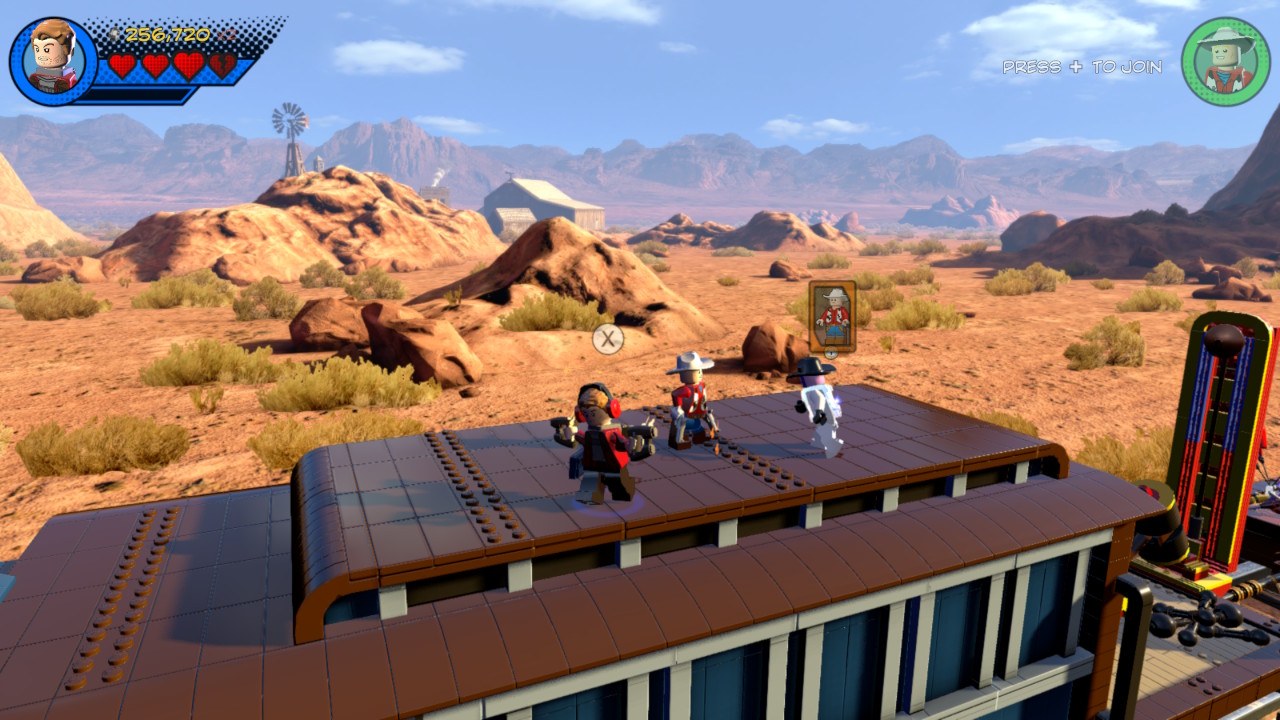 The game also has general performance issues not linked to the hardware. In one instance, a cutscene’s visuals seized up while sound kept playing; in another my character simply got stuck at the tail end of a lengthy boss battle and I had to restart from the last auto-save point.

In many ways the game feels unpolished too, with several mechanics being barely defined or just plain counter-intuitive. For instance, you switch out characters in the overworld by holding X. This is all well and good until you try to do it while playing as a character who can “transform”, like Giant Man or Spider-Man. This means you have to hold down X again while they’re in the middle of the transformation animation, something the game doesn’t really tell you. After over a decade of working on similar titles, you’d think TT Games would have ironed out these issues.

While it’s filled with little flaws that quickly pile up and become frustrating, Lego Marvel Super Heroes 2 can be easily recommended to fans of the long-running publisher, whether they be newcomers from the movies or hardcore comic collectors. For everyone else, it’s just another Lego game. 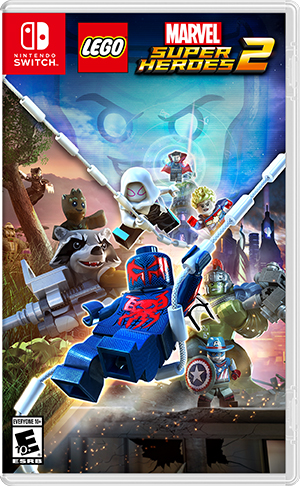