It’s been four years since Sonic Team’s last outing, Sonic Lost World on the Wii U. In that time, the branch of Sega in charge of the Blue Blur was working on Sonic Forces, the next 3D adventure for Sonic & friends. The marketing bragged that Forces was made by the same team as Sonic Colors and Sonic Generations, two of the most well-received Sonic games in recent memory. Unfortunately, Forces doesn’t hit the highs of those games, but it’s still a fun, albeit flawed, journey in its own right.

To start things off, it’s worth noting that Sonic Forces asks you to choose between Normal Mode and Hard Mode. Hard Mode is what we’re used to playing, where Sonic loses all of his rings after getting hit. In Normal Mode, he only loses 10 rings after each hit. Sonic Forces throws rings at you, so it’s almost impossible to die if you choose Normal Mode. I recommend Hard Mode for the true Sonic experience.

Sonic Forces includes four different types of levels throughout its 30 stage campaign: Modern Sonic, Classic Sonic, Avatar stages and tag-team stages. There’s a pretty even balance of the gameplay types, and I never felt like I was spending too much time on one type of level. 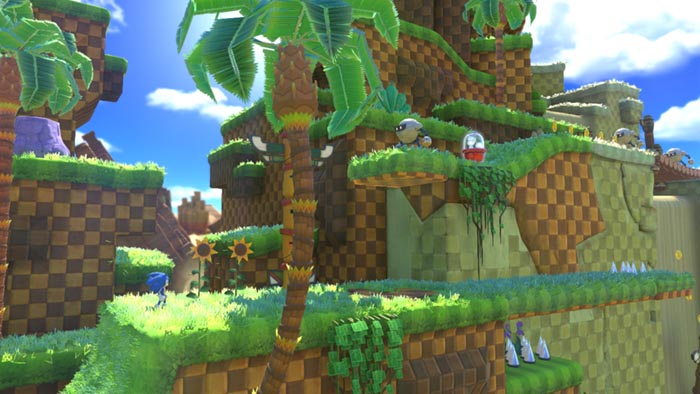 Modern Sonic controls similarly to games like Colors and Generations, but with some new inconveniences, which I laid out in my demo impressions. I was able to adjust relatively quickly to Sonic’s new momentum patterns, but inconsistency of side-to-side movement was frustrating at times. There was one specific level where Sonic was supposed to sweep around a huge turn, but even though I was holding the stick all the way to the right, Sonic just ran off the edge on the left side.

Luckily, apart from this instance, Sonic Forces plays very well. Select Sonic games have become infamous for their game breaking bugs and glitches, but I didn’t experience anything troubling during my playthroughs on Switch or on PS4.

The Modern Sonic levels once again blend a mix of 2D and 3D sections that seamlessly transition back and forth. The highlights of the game come from these Modern Sonic sections, with a few set pieces that stick out in my head as some of the best in Modern Sonic history. It’s still a joy to run through these gorgeous landscapes Sonic Team has created, and there’s always something spectacular going on to catch your eye. 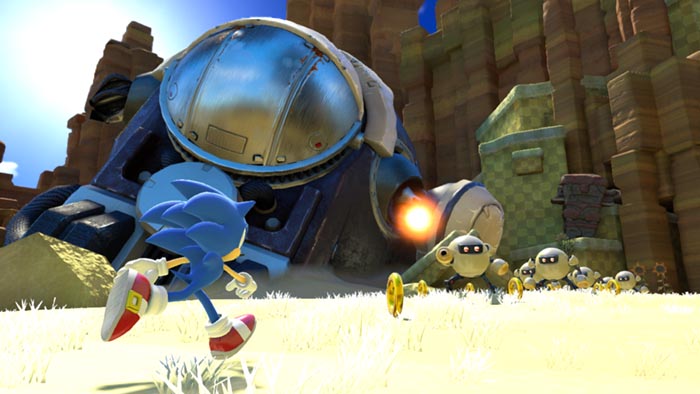 Unfortunately, there are problems with the Modern Sonic sections. Player efficacy has shrunk to an all-time low, and lots of times you just watch the action unfold rather than control the action. Luckily for Forces, most of the levels are a joy to look at, and I usually didn’t mind taking a short break from controlling Sonic to watch him jump from spaceship to spaceship, take on a giant snake or storm to the top of a pyramid.

Poor level design also crops up in all level types. While most Modern Sonic stages, especially in the latter half of the game, have branching paths to find, some early levels are stunningly lacking alternate routes to take. This really harms the replayability factor of some levels. For me, one of the pillars of Sonic games is going back to improve your time on a level. Forces even includes online leaderboards to compare your times with the rest of the community. It’s disappointing that some of the Modern Sonic levels fall short, especially when the well-designed Modern Sonic stages stick out as the highlights of the game.

The clear low points of the game come whenever a Classic Sonic level rolls around. After the brilliance of Sonic Mania, the Genesis-inspired stages in Forces feel like an afterthought, with some of the laziest level design I’ve seen in quite some time. Classic Sonic himself also feels like an afterthought, never quite fitting into the fabric of the Forces story arc. Just like the Modern Sonic levels, Classic Sonic starts to hit his stride later in the game, but it still never feels right. 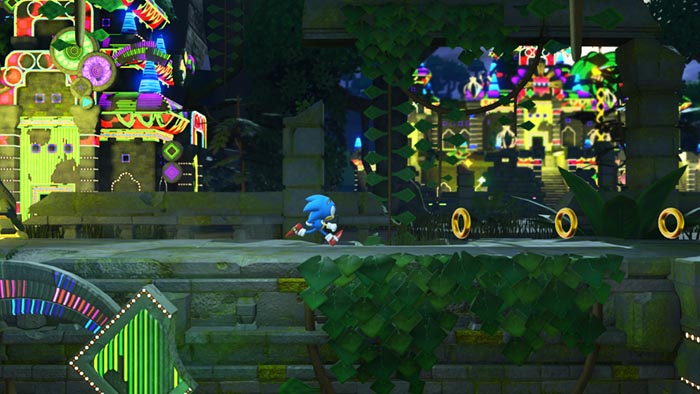 Rings and powerups are given to you like charity handouts, and there’s almost no clever placement of enemies or obstacles. Enemies are usually just standing in a straight line, simply waiting to be plowed through on sight.

Sonic Forces is a very easy game, except for a few moments near the end, but the tradeoff is that your sense of speed and fluidity is rarely broken up. The challenge of getting to the end of each level is pretty low, but the journey there is usually pretty exciting. There are also some secret levels unlocked for finding red star rings, and those tend to ramp up the challenge with Sonic Colors-inspired 2D platforming sections.

Since its introduction, the custom character aspect of Sonic Forces has taken over conversations about the game. A third gameplay type, in addition to modern and classic versions of Sonic, the avatar represents the first time since 2006’s Sonic the Hedgehog that Sonic Team has included a playable character other than Sonic. And I’m happy to report that the Avatar stages are much more enjoyable than I expected them to be. 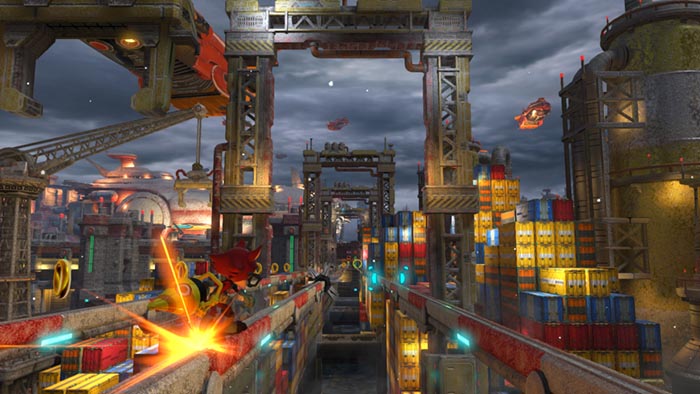 Your custom character uses a grappling hook and various weapon types to navigate through each stage. The weapons range from a flamethrower to a lightning whip, each inspired by a type of Wisp from Sonic Colors. The weapons are incredibly overpowered, and I had no problems taking down enemies with them. Certain levels are designed around specific Wispons, allowing you to access routes that you wouldn’t be able to reach with the wrong weapon.

The grappling hook provides some pretty neat moments, with some that feel very Nathan Drake-esque. Your character also has a special ability depending which species you choose. I chose a bird my first time through, which gave me the ability to double jump.

Forces revolves around the custom hero experience. I unlocked pieces of gear for my avatar after completing each level, which I could equip anytime from the world map. There are hundreds of pieces of gear to unlock, and you can outfit your character as anything, from a pirate to a football player. 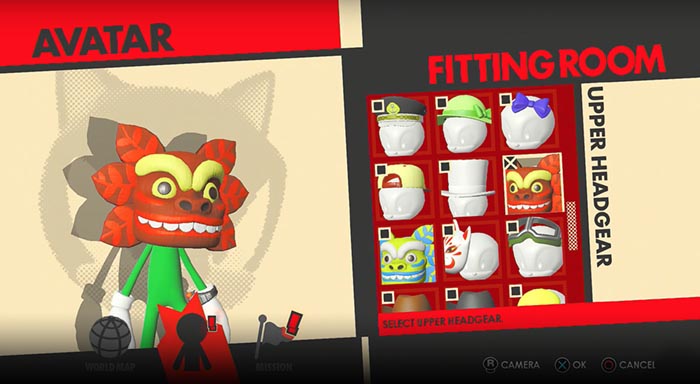 The avatar stages are fun, but suffer through the same issues as the other stage types. Some poor design choices and low difficulty level keep the stages from being great. Still, the mechanics are solid enough and the set pieces are thrilling at points, which, coupled with the plethora of customization options, makes the avatar an overall positive experience.

The story of Sonic Forces gives off the vibe of a mid-2000’s Sonic game. It’s grim and dark, but still has the cheesy, one-liner filled dialogue and the lessons about friendship.

The story kicks off with Sonic getting destroyed by a mysterious new villain, Infinite. With Sonic out of the way, Eggman soon takes over the world, with only a small resistance of freedom fighters left to stop him. It’s in the beginning stages especially where Sonic Forces struggles with its tone. The story takes itself very seriously, and it’s definitely a shift from the more lighthearted tales we’ve seen in recent Sonic games. 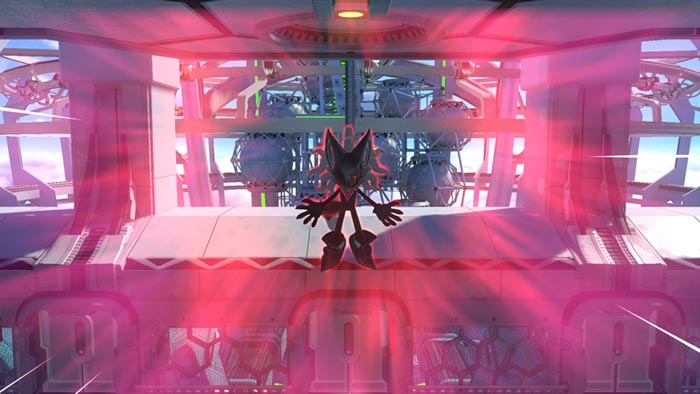 For example, when Tails, Knuckles and the rest of the gang think Sonic is dead, the dialogue doesn’t match the delivery of the lines. Knuckles almost casually refers to the death of Sonic, before awkwardly pausing and robotically delivering, “Sorry. I’m still not used to saying that.” So, in other words, it feels like standard Sonic cutscenes. It’s not all bad, though. I’ve had trouble adjusting to Roger Craig Smith as Sonic since his introduction in Colors, but his performance in Forces felt like his best Sonic yet.

As it’s been with most 3D Sonic games, where Forces really shines is in its soundtrack. Synthesizer-filled tunes with awesome hooks and cheesy Sonic goodness litter the soundtrack. It’s the perfect music compilation for flying through levels at the speed of sound. On top of that, the credits song is filled with emotion and the lyrics feel like a love letter to faithful Sonic fans.

I had the opportunity to play Forces on Switch and PS4, and it’s clear that the Switch version is a step down graphically. The PS4 version runs at 1080p and 60 frames per second, with the Switch version clocking in at 720p and 30fps. The Switch version is very playable, and I didn’t experience any slowdown or hiccups in docked mode or handheld mode. The Switch’s textures aren’t nearly as clean though, and the whole world looks a little muddy. If you’re looking for the most gorgeous Sonic experience to date, I’d have to recommend Forces on PS4. I was pleasantly surprised with how well it ran in handheld mode on Switch, though, and I’m sure Forces will become a staple on bus and plane trips.

It feels like Sonic Team had a much larger vision for Forces during development compared to the finished product. The story takes a darker tone than recent entries have, the soundtrack is epic and carries weight to it, and some of the locations are incredibly grand and ambitious. Sonic Team even brought back some of the most beloved villains in Sonic history, with Chaos and Metal Sonic both making appearances. It’s clear Sonic Team was going for something big.

The reality is that the finished product is a much smaller project. The adventure only takes four to five hours, and a large part of that time is spent watching cutscenes. The levels are short as well — throughout the game’s 30 stages, the average runtime of a level clocks in at just over two minutes.

In the end, Sonic Forces is plain, stupid fun. It might be flawed, but that doesn’t change the fact that I had a childlike grin on my face from start to finish during my adventure, blasting through the best levels, watching the cheesiest cutscenes and listening to the awesome soundtrack. There’s so much energy and excitement in Sonic Forces that I couldn’t help but enjoy myself. I won’t deny that there are some obvious issues Sonic Team needs to address moving forward with 3D Sonic, but that won’t stop me from having a great time with their newest effort.

Leave a Comment
Buy at Amazon Buy at GameStop
6.5