Doom and I have been on quite the journey together. I remember when I was ten years old, watching my dad play the groundbreaking original title on his Compaq desktop and being floored at what I saw. Up until that moment, video games had been colorful, cheerful and two-dimensional affairs to me, nothing like the dark and brooding 3D hellscape that unfurled before my eyes.

Fast forward 22 years and the franchise is still kicking — and, in a way, it almost feels like history is repeating itself. I’m about to leave the colorful, cheerful world of Super Mario Odyssey and transport myself back to the gates of Hell in Doom on the Switch. While it’s still bizarre to see AAA, ultra violent shooters on the same console where Mario can dress like a pirate and posses a pine tree, it’s a welcome addition to the Switch’s already impressive third party lineup.

WELCOME (BACK) TO HELL

If you’re a fan of the Doom franchise, the story in this latest entry won’t surprise you all that much. A lone space marine is stranded on a martian military base while legions of demons and monsters pour out of a portal from Hell. (Sound familiar?) Being the outstanding soldier that you are, you’re tasked with bringing an end to the madness with an arsenal of weapons ranging from a lowly plasma pistol to the iconic and extremely powerful BFG. Doom offers up ten weapons in all, with each feeling unique and brutal. While using these weapons to slaughter enemies is a riot, you can also perform a melee “Glory Kill” — a brutal and gory way to put an end to your foes. Executing a Glory Kill rewards you with additional ammo and health, which adds a decent layer of rhythmic strategy to the mix.

All of your favorite Doom enemies are here as well, from the low level imp to the towering Baron of Hell, all reimagined and more terrifying than ever. While enemy detail has changed quite a bit from their debuts in the 1993 original, they’re still recognizable enough to fill old school gamers with nostalgia. 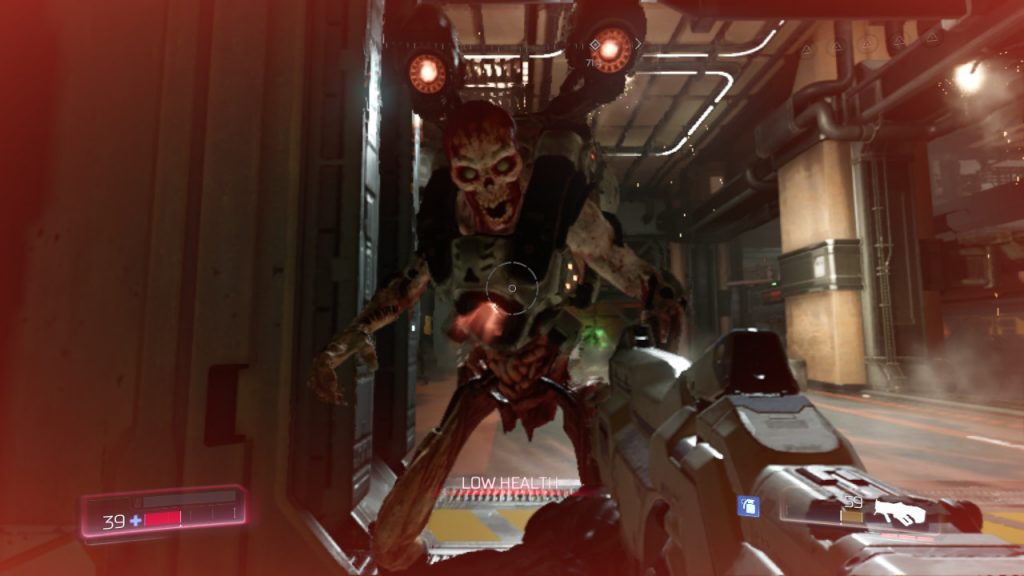 Gameplay is fast and fluid with a huge amount of enemies to slay and a decent selection of locations to do the exterminating. Unlike many modern shooters, Doom has you focus on running and gunning rather than making you trudge through a convoluted story or secondary objectives. Movement is key in the game, and taking time to smell the roses with a room filled with demonic monsters is an extremely good way to get yourself killed. That said, while I enjoyed Doom’s “run, kill, repeat” formula, I found myself in a perpetual state of déjà vu as I was locked in yet another room, unable to progress until I eliminated another batch of Hellians.

As the game progresses, and enemies become stronger and more plentiful, weapon and health upgrades become a must. After completing specific tasks, players are rewarded with material that can be used to upgrade your ammunition capacity and max health, as well as your weapons’ overall effectiveness. Upgrading a weapon to use explosive rounds or enabling rapid fire really helped keep the endless slaughter of the damned fresh and fun, even eight hours in. 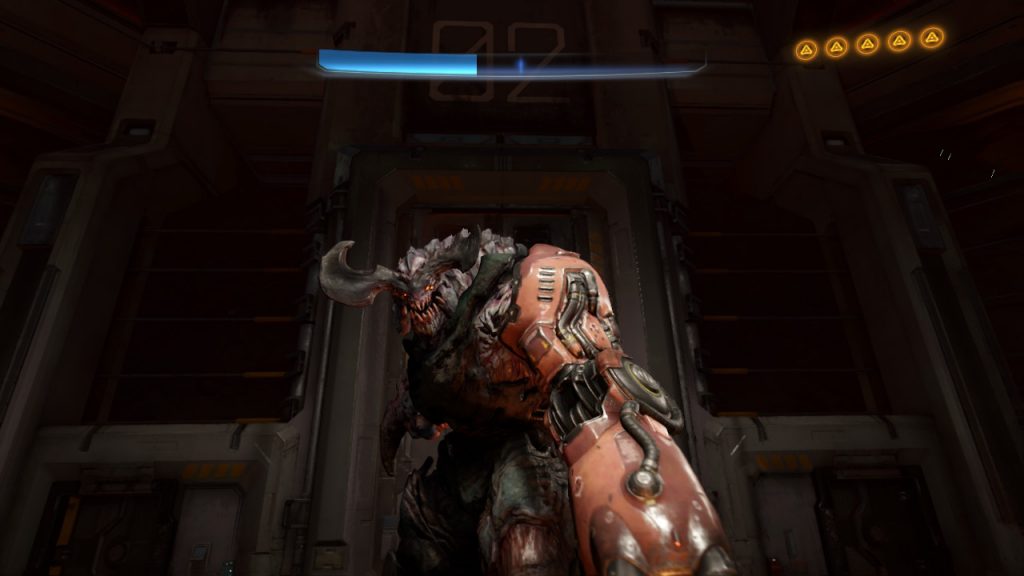 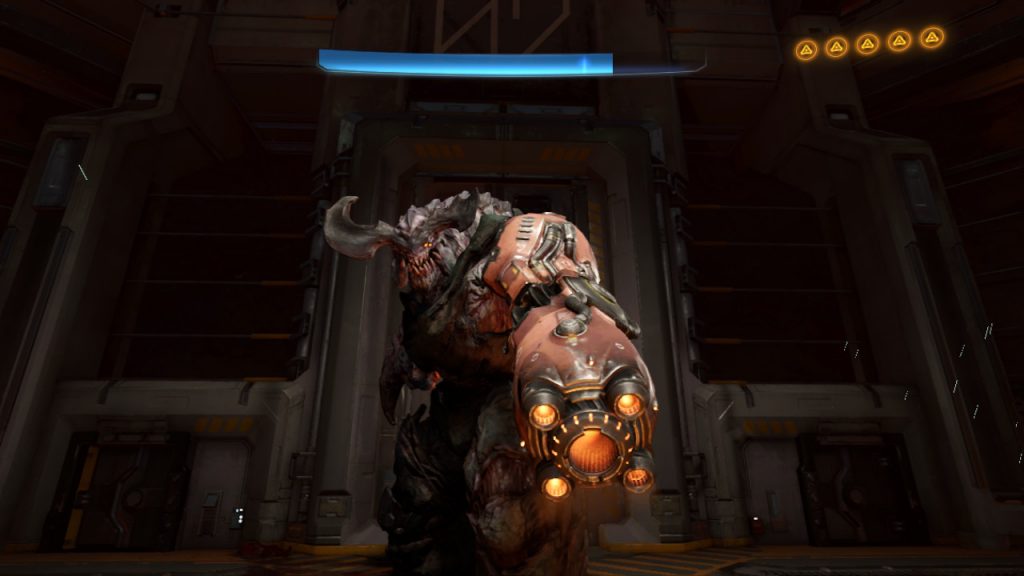 Doom changes things up considerably with its amazing boss battles, too. These larger than life encounters require a bit of trial and error, with players forced to memorize enemy patterns to avoid being decimated, so expect a death or two while you learn their movements. These battles are some of the most impressive aspects of Doom, both from a gameplay and graphical perspective, and I enjoyed taking on every single one of them.

If slaying satanic hordes and massive bosses just isn’t cutting it for you, Doom also offers a plethora of hidden items, Easter eggs, and side quests to complete — on top of an addictive Arcade Mode that allows players to speed through stages from the campaign with all the weapons and upgrades unlocked. Mowing down enemies and picking up items award the player points that are tallied at the end of the stage. Complete with leaderboards and achievements, Arcade Mode offers up a heap of replayability, especially for competitive types. Out of all the modes available in the game on the Switch, this was by far my favorite.

On the controls front, Doom has support for both Joy-Con and Pro Controller play. For the most part, using the Joy-Con to play Doom is a decent, although sometimes a cumbersome experience. I found myself having issues executing dodges and avoiding enemy movement, especially in boss battles. The Pro Controller, on the other hand, felt fantastic and was definitely the preferred control option for me.

Doom on the Nintendo Switch is the first occurrence of a AAA PS4 and Xbox One first-person shooter making its way onto Nintendo’s little hybrid that could, and while the Switch’s graphical power can’t quite match that of Sony and Microsoft’s machines, the game proves that the system has some real potential. Doom runs at 720p in both docked and handheld mode, and while that may seem like a major step back from the 1080p you can get on other consoles, it actually works pretty well, for the most part. While playing in docked mode, Doom looked better than I originally expected, with enemies and environments looking crisp with a decent level of detail, all while maintaining a stable 30fps. The fact that Doom is able to run this well on Switch hardware really makes me excited for what we can expect to see make the jump in the future. 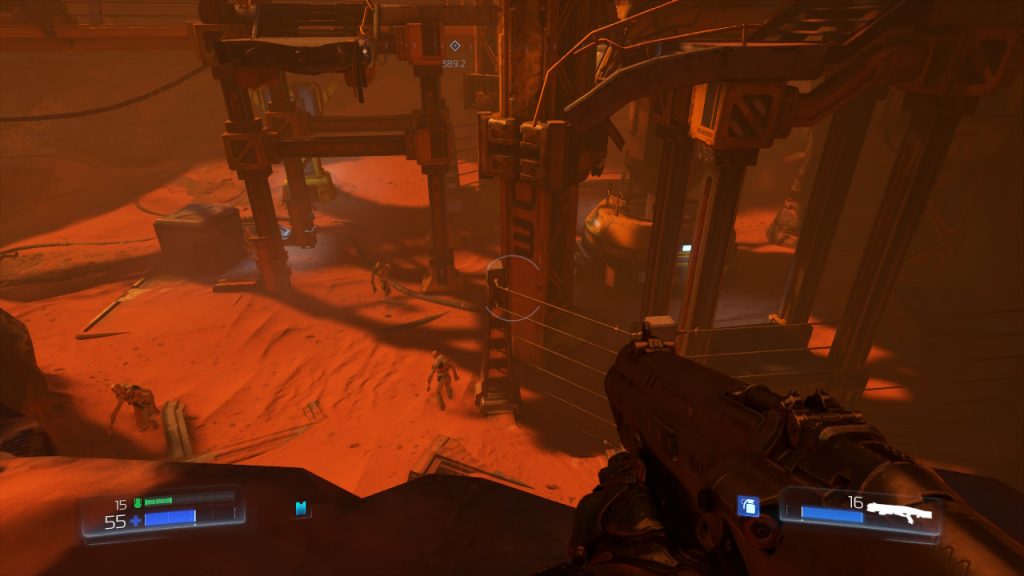 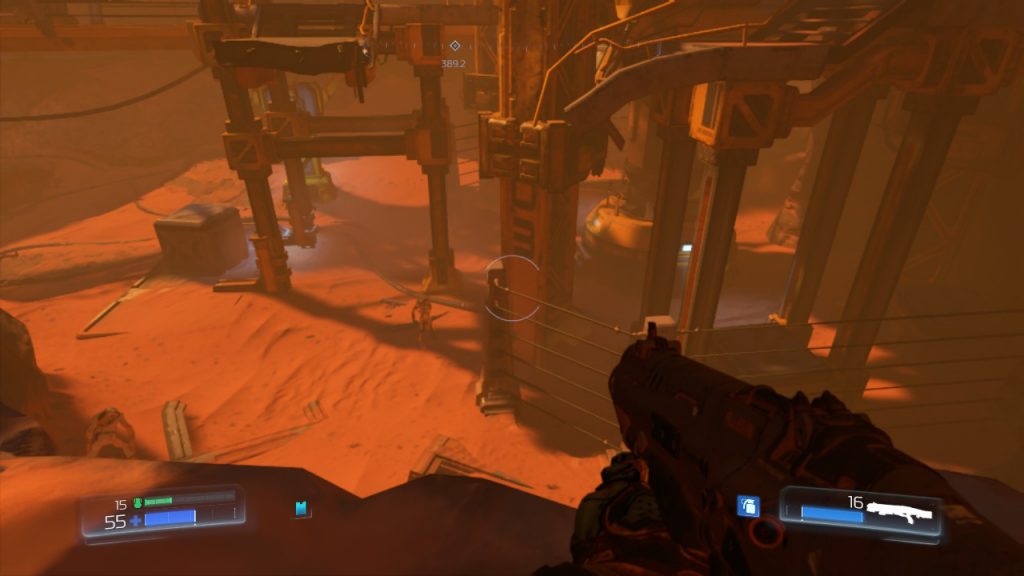 Playing Doom in handheld mode is a slightly different story, however; with the game’s textures taking a noticeable dive. Everything from your weapons to enemies loses a considerable amount of detail when the Switch is undocked, but luckily, it’s pretty easy to look past thanks to the game’s solid frame rate. At no point did the drop in detail take away my enjoyment away from Doom, although I definitely preferred the look of the game while docked much more. Handheld mode also suffers from extremely difficult to read text boxes, especially at the beginning of the game. In some cases, the onscreen text was so small that I found myself bringing the Switch closer to my face, several inches away from it, just to read them.

Another oddity I experienced was the game thinking it was in handheld mode even though it was docked — textures remained much lower quality than they should have been until I undocked and redocked the console. Thankfully, I only experienced this issue once during my time with Doom. Even with these issues present, Doom still managed to be an extremely enjoyable handheld experience and one of the best looking games released so far.

On top of the single-player campaign, Doom on the Switch also brings the Multiplayer experience (via a separate 9GB download for owners of the physical cartridge). Game modes like Team Deathmatch, Free-For-All and Domination offer a wide variety of playstyles that should feel pretty familiar to fans of online shooters. Doom offers a few unique features, too, like the introduction of the Demon Rune, which turns the player into a demon that can rip through the competition when equipped. Sadly, the Switch version of the title had very little going on in terms of online activity during my review process so I was only able to join a small handful of games. What I did play was enjoyable enough with a wide variety of maps and modes at my disposal, but overall, Doom’s multiplayer feels like nearly every other competitive shooter I’ve played over the years. Not bad, but nothing too special. 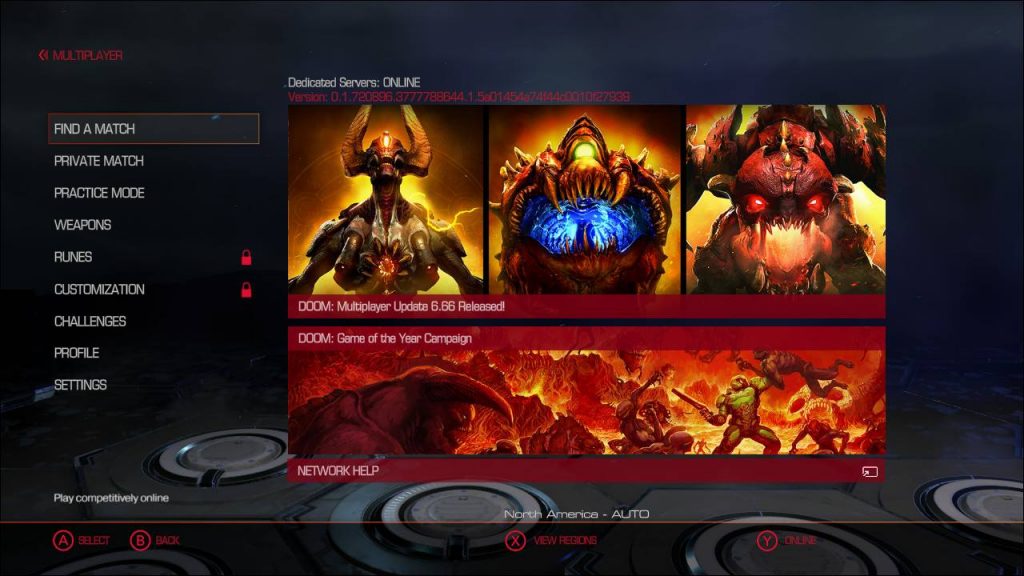 One aspect that was omitted altogether from the Switch version of Doom was the stellar map creation tool, SnapMap. Owners of the PS4, Xbox One and PC versions of Doom can create custom levels, complete with alterable enemy movement, and they have the option to share them online. Unfortunately, this feature must have proven too much for the Switch to handle, as it’s nowhere to be seen. Hopefully a future update can add this feature in, but until then, I’ll be sticking to the campaign.

DOOMSDAY IS READY AND WAITING

Doom on the Nintendo Switch is a marvel to behold. What the team at Panic Button Games was able to accomplish using the Switch’s limited resources is nothing short of spectacular. I still find it important to note that those of you who already own a copy of Doom on another system don’t really have much incentive to double dip unless you plan on using it on the go frequently. For those of you who are new to the title, Doom on Switch is more than worth a play. While it might not have all the graphical bells and whistles as its console brothers, it still manages to cram a whole lot of content onto a tiny cartridge. The exclusion of a map editor is a bit disappointing, along with the lackluster multiplayer and the $60 price point for a nearly two year-old title — yet Doom still has a lot going for it, especially when it comes to the engaging single-player experience. 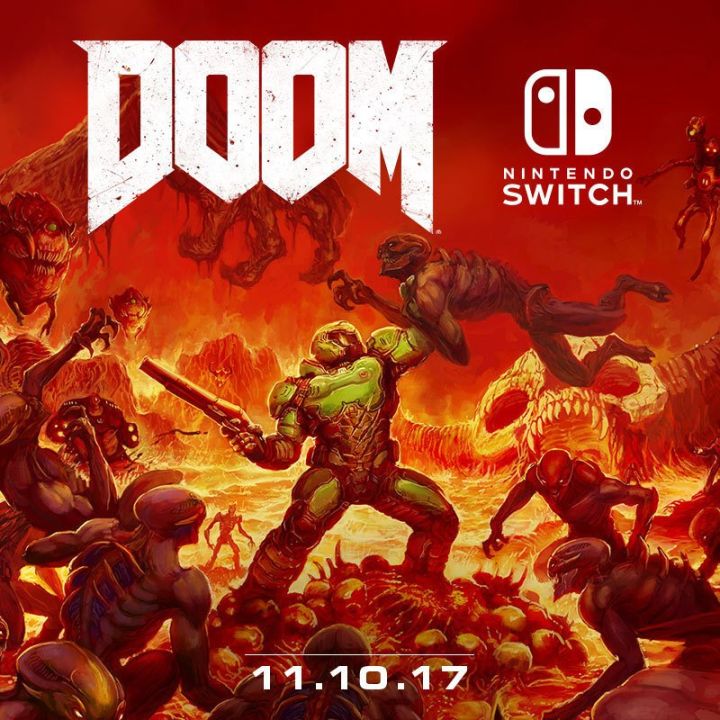