88 Heroes is perhaps the craziest platformer I have ever played, plain and simple. It’s a game that doesn’t pull punches by any means, with a steep learning curve and many, many heroes to master. It lives up to its name, quite literally, by having 88 — or 98 in this particular release — heroes for you to play as. At first, you might think that 98 heroes is too many — I certainly did. How could any game developer design a roster that big while having each character feel meaningful? It didn’t seem possible when I first started up 88 Heroes, but Bitmap Bureau certainly pulled out all the stops when coming up with this massive roster of characters, and it worked out well.

No Place for H8

88 of Earth’s most unlikely heroes are out to stop the evil Dr. H8 from destroying the planet by conquering 88 different levels in just 88 minutes. There’s one catch: you take control of a new hero each time you die or complete a level. This is perhaps the biggest reason that this game works so well with so many heroes. None of them feel like they’ve overstayed their welcome, because every death is a chance to play the level at a different angle. No two playthroughs are ever the same, since the order of the heroes is randomized for each new attempt at toppling Dr. H8’s evil schemes.

The levels start out short and simple, but they quickly ramp up in difficulty, requiring some real thinking and quick reflexes to keep even your most proficient heroes from dying. The goal is to take your hero from the starting point to the elevator that will lead you to the next room. Along the way, you’ll dodge and destroy various enemies, including helpless robots, lizards with swords (and nice suits) and giant, bouncing skulls wearing 3D glasses. There are also some run-of-the-mill stage hazards to avoid, like saw blades running across the ground and giant, swinging axes. Most stage hazards can be destroyed by certain abilities, but for most heroes, it’s best just to avoid them altogether. With the game designed this way, you have to prepare to die, a lot. A lot of deaths will feel cheap and unforgiving, especially at first when you’re still learning each hero, and there’s an added sting of knowing that hero is likely gone for the entire playthrough. Since you spend such a small amount of time with each hero, it feels even more unfair to die so much during your first couple attempts, which is likely to turn some players away. 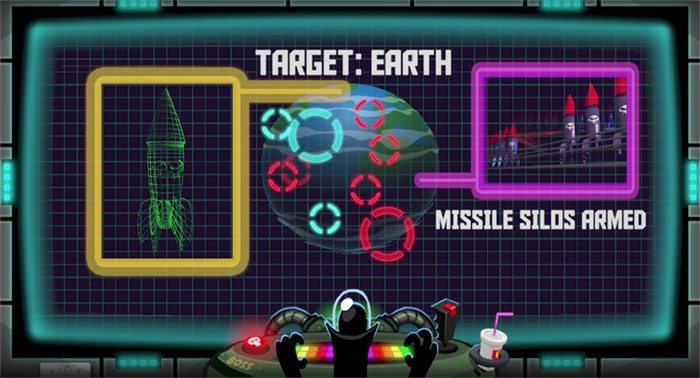 A Legion of Average Heroes

Each character is wonderfully unique: some are geared for defensive play, others are made to be played offensively and many are just plain weird. I have definite favorites, no doubt about it; but there aren’t any heroes I outright hate. That really speaks to how well this game was designed around such a huge roster: each hero has a place, somehow, no matter which level you’re playing. Of course, some are better equipped to handle certain sections, but I rarely felt like I was totally helpless as any of the heroes. The appeal of so many of the heroes comes from the fact that the roster is packed to the brim with pop culture references, from the Rick Astley-inspired Rick Roll and Retro Reptile’s homage to Snake, to four different armadillos that are not-so-coincidentally similar, to the Teenage Mutant Ninja Turtles and Veronica Vortex (a Portal reference with a literal portal gun). Outside of references, the characters are just weird enough to make me fall in love; Booster Goose, Jim Nastics and Shield Maiden are a couple of my noteworthy favorites.

Certain heroes can more than hold their own, with powerful abilities coming from the likes of Laser Kittie and Boomstick Benny, while others will require pure platforming skill to master. Heroes like Glass Girl and Rubber Dubber Doo have no offensive abilities at all, requiring you to expertly maneuver them using their other abilities in order to succeed. As I mentioned earlier, every hero is able to tackle each level, but certain heroes do feel like a waste when they pop up during levels with plentiful enemies, knowing they’re likely going to die if you don’t time your movements and jumps just right. On the flip side, once you play enough, you’ll start to notice sections that would be perfect for a hero with a particular movement ability, rather than raw, enemy-obliterating power; the aforementioned Rubber Dubber Doo is able to stretch his way across gaps, zipping over to the other side with ease, and some levels reward this outside-the-box thinking by placing coins in places where only certain heroes can reach or giving you easy access to the end-point elevator. 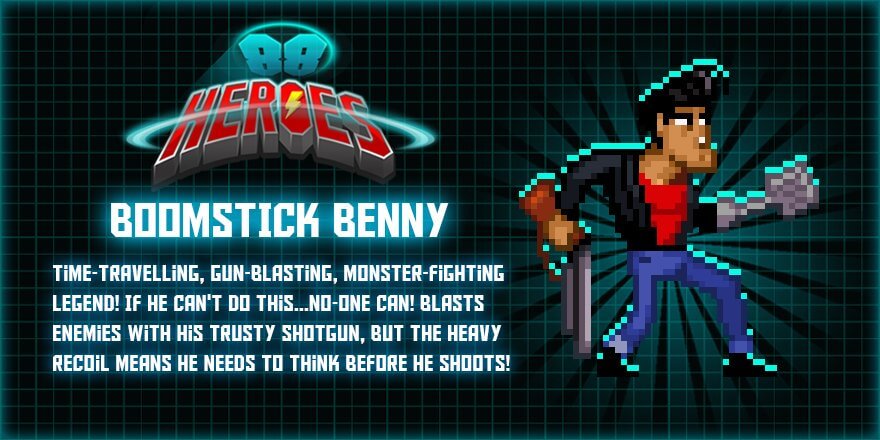 A Good Theme, But A Bad Joke

88 Heroes fully commits (and then some) to the number eight, which is great and effective theming within the gameplay itself: 88 seconds to complete a level and 88 minutes to complete all 88 levels, and for every 88 coins you collect you can revive a fallen hero. It reminds me of the number themed Easter Eggs in Scott Pilgrim vs. The World, only in 88 Heroes it’s the central concept the whole game is built around. Outside the gameplay and in the presentation itself, however, the overuse of the number eight just rubbed me the wrong way. Dr. H8’s evil plans take place on August 8th, 1988 at exactly 8:08 am, and if the 88 heroes fail, he will launch 88 nuclear missiles directly at the earth, unless he is payed $88 octillion. It reminds me of a kid telling a good joke just a few too many times because his friends laughed at it hard enough the first time.

Outside of the main game mode, there are a few ways to challenge — or punish — yourself even further. Magnificent 8 Mode lets you take eight heroes of your choosing into the game, trying to complete it with those eight, and those eight alone, in the standard 88 minutes. No matter how hard I tried or which combination of heroes I used, I couldn’t quite get the hang of this mode, which was to be expected when confronting the game with one-eleventh of the total heroes. Not quite enough for you gluttons for punishment? There’s also a Solo Mode, unlocked after completing the main game; where you have one hero, with 88 lives, to tackle all 88 levels and hope for the best. 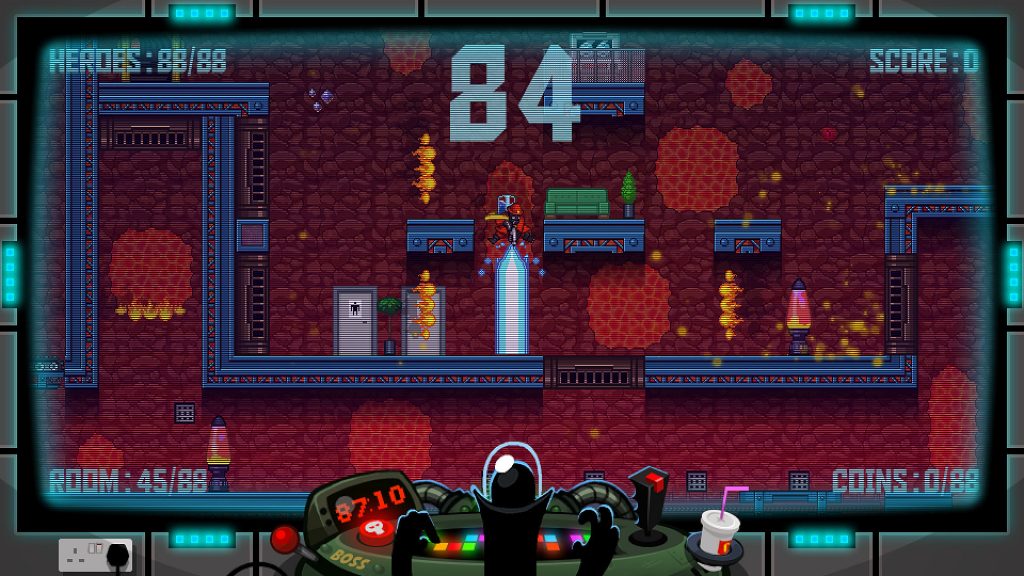 One final mode stands between you and total conquest of all of Dr. H8’s plans: H8 Mode. With just eight levels this time around, any normal gamer would think that 88 heroes would be plenty to tackle them. Any normal gamer would be dead wrong. The eight levels brought to the table by H8 mode are some of the most unforgiving levels of platforming I have ever experienced. I’ve managed to make it to the end of this mode one time, and that was only by whittling down my vast pool of heroes to Miss Fortune, a hero whose special power is flipping a coin for a 50% chance of instantly completing the level. And that other 50%? Instant death. I beat five levels in H8 mode, and then bypassed the last 3 due to sheer luck. While it’s absolutely brutal, H8 Mode might be my favorite way to play 88 Heroes. Something about tackling a small amount of insanely difficult levels is more appealing than trying to run through 11 times as many, even if they’re nowhere nearly as hard.

My favorite thing about 88 Heroes is also the first thing I noticed about the game, and that’s the soundtrack. It’s an absolutely phenomenal mesh of ’90s video game music and ’80s synth, and it blew me away. There aren’t many tracks, due to the game only having four worlds, but every world’s music is distinct, and I fell in love with each one. Saxy Dave, a hero who puts the hurt on enemies by swinging his saxophone, even has his own theme music that takes over the music for the stage he’s in, and it’s just as catchy as the rest of the music. Unfortunately, I wasn’t able to find the soundtrack in its entirety anywhere on the internet, otherwise it’d be blaring through my speakers as I write this review.

Now, Go Save The World

Overall, 88 Heroes – 98 Heroes Edition is an enjoyable platformer, though it’s chaotic and unforgiving more often than not. After the first two or so hours with it, I wasn’t sure whether to love it, hate it or be annoyed by it. Even now, I still haven’t landed on just one of those feelings. The gameplay feels like it’s made to grind your gears on purpose, but it stays enjoyable thanks to the random and gigantic cast of heroes, which is a big part of why it’s appealing in the end. I like a challenge and good music, and 88 Heroes certainly provides tough levels, bundled with innovative and outlandish mechanics, all set to a great soundtrack. I won’t say 88 Heroes is a game for everybody, but if you can look past the cheesy presentation and focus on what’s beneath it, there’s something there for gamers looking for a decent platformer. 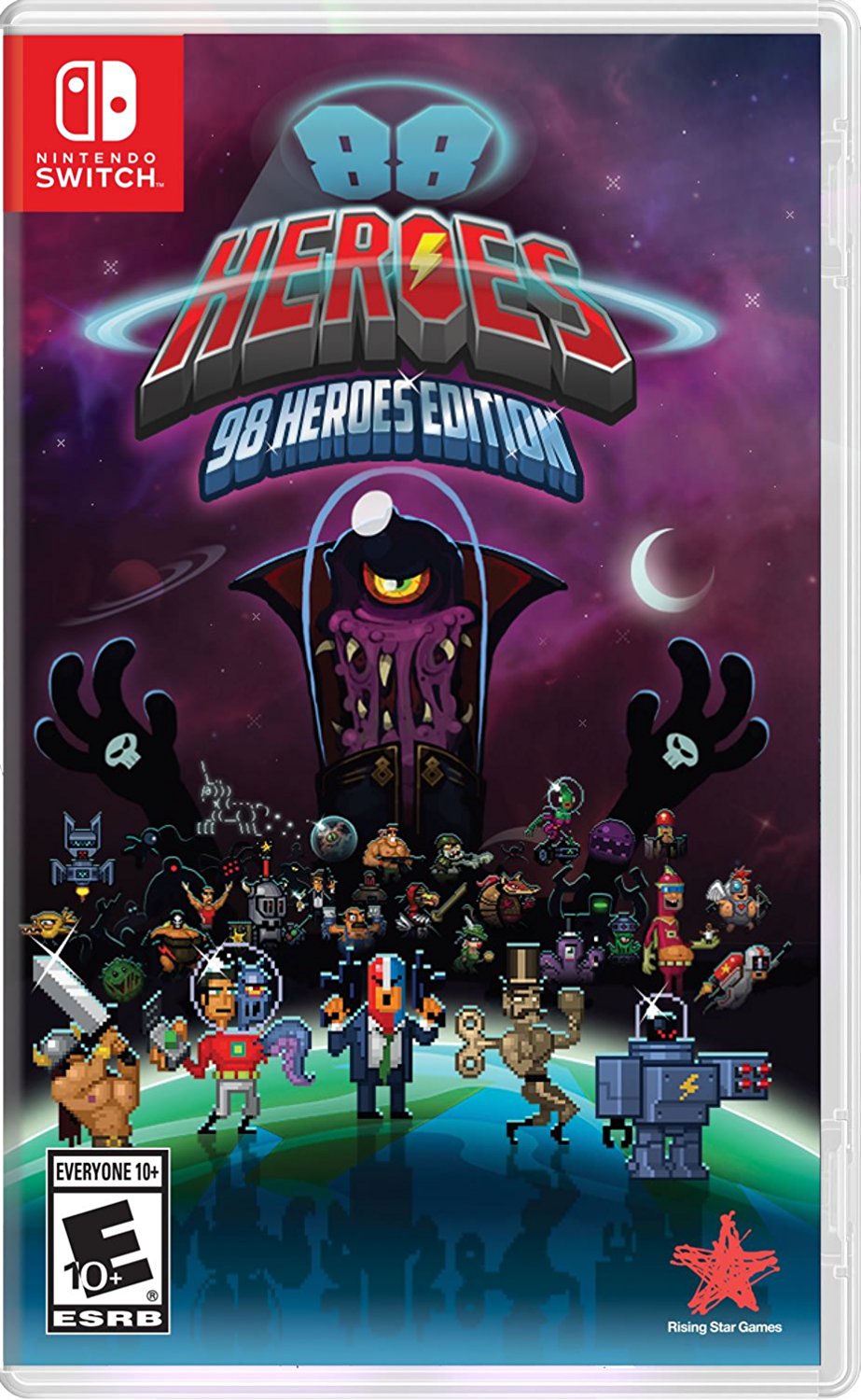