Nintendo Treehouse is back at it with blogging, releasing its first post on the upcoming Xenoblade Chronicles 2. The post focuses on the game’s battle system, as it appears to be somewhat complex, and even veterans of the first game (such as myself) will have things to adapt to. Let’s break down the information.

First off, the post reiterates and clarifies the game’s Driver/Blade system — the party is composed of three Drivers (e.g. playable characters) who can “equip” three Blades each. Each Driver will always start with one particular Blade when the battle starts (the one set to the top of the D-pad) and will have to wait a little to be able to swap to another one, so you’ll have to consider who your primary Blade will be. 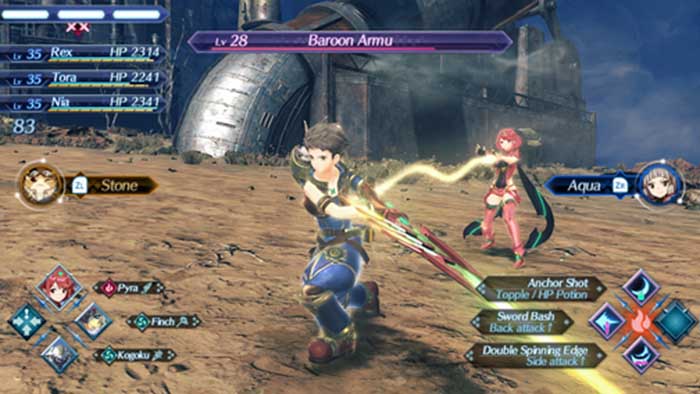 After this, the post separates the game’s combat into six layers of increasing complexity. The first is basic auto-attacking: simply staying in place (you can’t auto-attack while moving, a change from both the first game and X) will cause you to hit foes with your equipped weapon. Doing this will fuel the gauge for the second layer, ARTS (in all caps, for some reason). ARTS have a variety of effects that increase their potency, and can also be chained together in ARTS Combos. For an example, Treehouse uses the classic Break/Topple from XC1: One character will inflict Break on an enemy, which doesn’t do anything innately, but makes them susceptible to Topple, which will leave them defenseless. All of this is only a slight variation on the previous Xenoblade system.

The next layer discussed is specials. Using ARTS will build up a multi-level special meter, from level one through four, that when activated deal devastating damage and also inflict an elemental status on the foe depending on the element of the Blade. Here’s where things get complicated — specials can also be combined one after the other to form Blade Combos. By using the correct combination of specials based on the element displayed in the upper right corner and an increasing succession of levels (ex: a level one Wind special, followed by a level two Ice, then a level three Earth), you’ll unleash a massive attack that deals over ten times the damage of a normal special attack. The game reduces the damage of repeat Blade Combos by stacking elemental resistance orbs on the enemy, so you’ll have to mix up your attacks if you want to pummel the opposition. 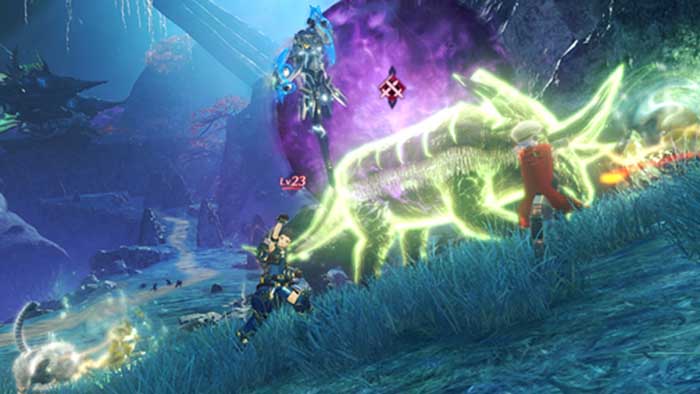 Finally is the Chain Attack, which appears to operate differently than in XC1. It’s activated in the same way, however, by filling the three gauges of your Party Meter by fighting battles. When activated, your Drivers will each hit the enemy with a boosted level one special — but if the enemy is surrounded by an orb, then you can burst it to give each of your Drivers an extra round of special usage. It’s easy to see, through this long description of systems, that each “layer” of action in combat feeds another — auto-attacking is the fuel that will eventually lead to fatal chain attacks that topple bosses.

The post also mentioned a system called “cancelling,” but mentioned talking about it in detail at a later date. You can read the full blog post for more details, and stay wired for more information on the game leading up to its December 1st release.