It’s no secret that the Switch is quickly becoming the home for an insane amount of great indie titles. The critically acclaimed Golf Story, Stardew Valley and Axiom Verge have all released in the last two weeks on the platform, but those are just some of the heavy hitters — there are plenty of other indie games up for grabs. Inversus is one of those titles, and after spending some time with it, I can tell you that it should not be overlooked.

A shot in the dark

I’ve been wishing for a fast-paced game that would get my mind racing without any overly complicated gameplay, and Inversus Deluxe came right along to quench my thirst. It has a simple premise: you move your square around the board, and you can only travel on spaces that are the opposite color of your square. You can fire shots in all four directions using the corresponding ABXY button, which will change the color of the spaces the shot travels across, until it either hits an enemy or the edge of the map. The whole “one button for each direction” thing is hard to wrap your head around at first, but you get the hang of it pretty quickly. 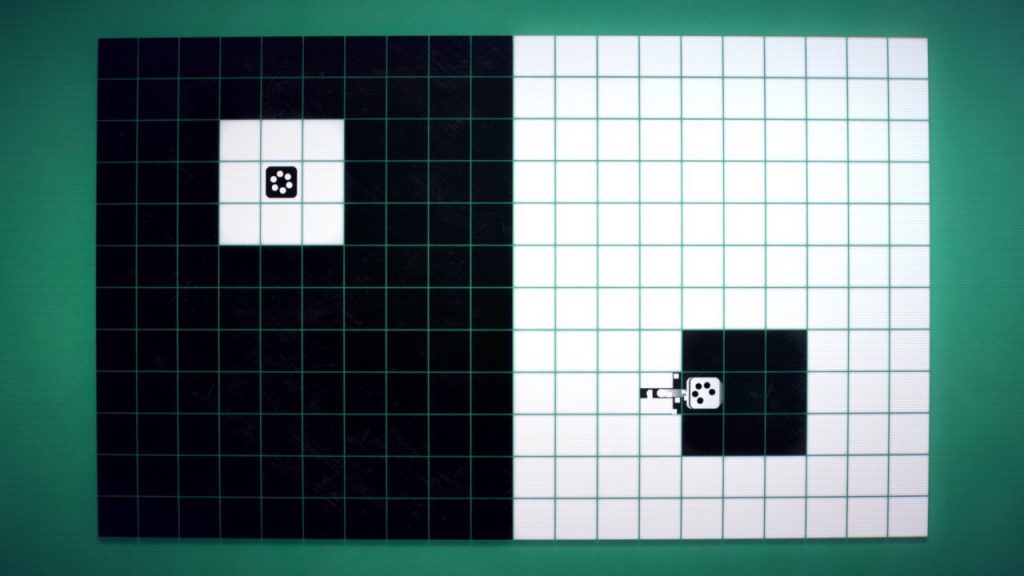 Putting the versus in Inversus

The game starts off with a tutorial, teaching you the above mechanics, and a couple fancy tricks; like holding down buttons to charge your shots and give them a wider range, or to use the “Fast Ammo” placed around the map to fire off your next shot a lot quicker than usual. After that it sets you free to pick from one of the two modes: Versus or Arcade.

In Versus, the main mode, you play against the computer or another person in a fight to the death, shooting at each other while traveling around one of the 39 maps, unlocking each map by beating the one before it. Your shots will create pathways for you while blocking the other player’s movement, allowing you to chase them into corners to land a hit. The first couple maps are pretty simple, providing ample space for you to get your bearings on how it all works, but the maps quickly become more and more complex. Later on, maps will wrap around the edges of the screen and overlap different sections to mess with your head, making for a confusingly exciting time, especially when playing against a human opponent. It’s chaotic in all the best ways, so much that a loss hardly ever feels cheap, and a close win will have you pumping your fist in the air.

Arcade, the only other available mode, has you fight against hordes of enemies across eleven maps, unlocked in sequence by collecting stars for performing well. The stars are pretty hard to come by, given that each consecutive star takes at least double the amount of points as the one before it to earn. 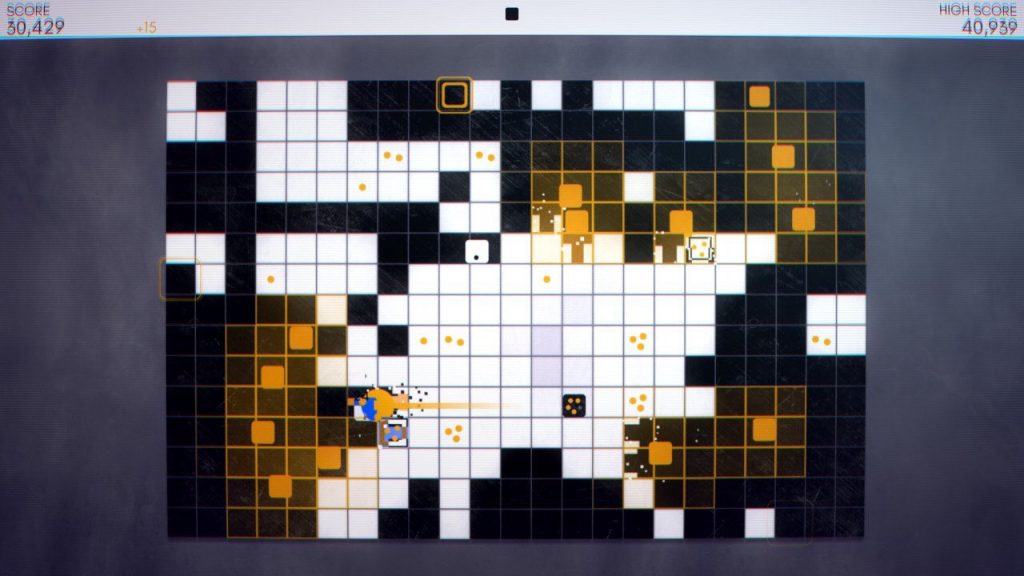 The gameplay in Arcade is fun, but a little more hectic, especially when playing as part of a two-person team. It’s often hard to tell what’s going on, and the game isn’t shy about cranking up the difficulty. Once you’ve got your feet under you and you’re on a roll, Arcade is an absolute blast, but the curve is harsh enough that it’s easy to get frustrated with the game before even unlocking the second map. The waves of enemies never stop: some are slow, others are fast. Enemies that can fire shots off, like in Versus, are present, but the most common type of enemy will only need to touch you to send you into oblivion. Luckily, you start with three lives, and are able to gain more with high-scoring chains, but those lives are pretty quickly spent on the tighter maps. Overall, Arcade is exciting, especially once you get the hang of it, but it’s a little too unforgiving for me to fall in love with it.

It’s not all black and white

Leveling up in both modes will grant you random unlockables, pulled from a pool of color palettes, emotes and trails. The color palettes are by far my favorite unlockable, ranging from a simple background change to a dramatic swap of the entire theme. Each color palette can be turned on or off, so that when they randomly cycle through with each round you play, you’re only seeing the styles you want to see. The trails are a cool touch, but often hard to notice in the midst of all the action. The emotes are fun, for sure, letting you express how you felt about a round or match with a press of a button — with four assignable slots, utilizing all the shoulder buttons and triggers, you can have an emote on hand for almost every occasion. Altogether, there are 75 different palette options, 9 trail options and 336 emotes for you to unlock, which amounts to a lot of playing to collect them all. 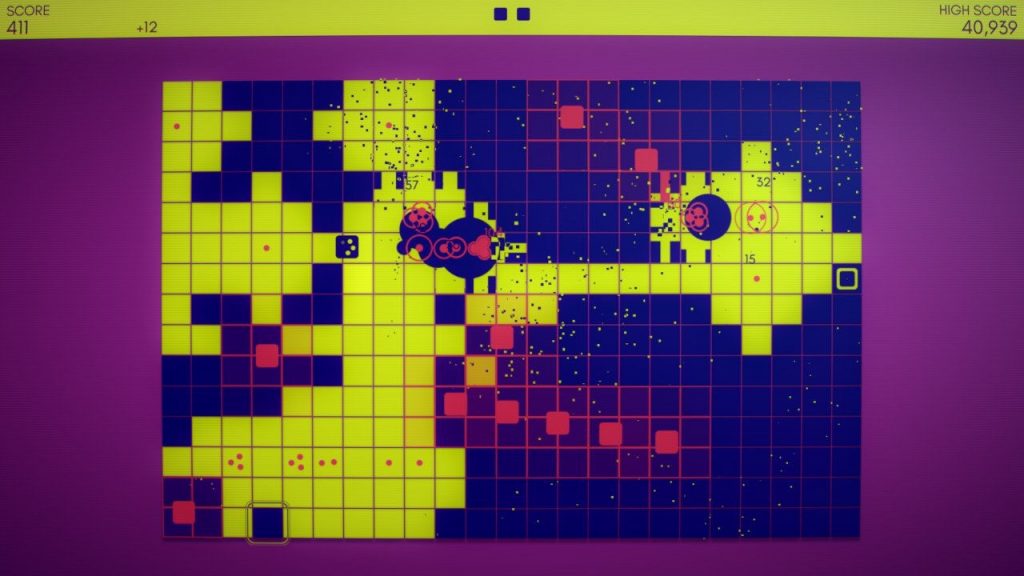 Those emotes can come in handy when playing online too, giving you a way to communicate with teammates or opponents, provided that you can actually find a match. Each game mode is also available online, so you can partner up, or go head-to-head, with anyone in the world — but believe me, the wait times are long. If you don’t feel like sitting through the long waits for a random player to join you, you can also play online with any friends who have their own copy of Inversus. While reviewing the game, it was extremely hard for me to find anyone to queue with, so I was unable to evaluate how well the online play works.

Inversus Deluxe is an interesting game; it’s simple enough that it could probably function in some form as a mobile game, though I couldn’t imagine playing it on that small of a screen, or with touch controls. It’s extremely easy to pick up and play, and the fast pace lends itself well to a quick match or two while you’re out with friends. It also works pretty well as a party game, simple enough that even non-gamers could hop in for some good times. The unlockables are fun to collect, if not a little overwhelming to scroll through. Overall, I had a blast playing through each of the versus levels with my wife, and I’m looking forward to sharing this little gem with all my friends. 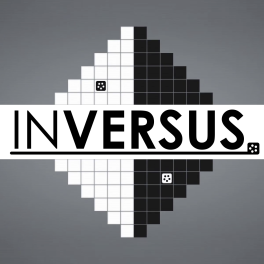