I first spent time with Oxenfree last year on PS4. It was one of those purchases that just kind of happened while browsing the PlayStation Store, looking for any cheap games that looked appealing. I had known next to nothing about Oxenfree before downloading it back then, and what followed was the discovery of my favorite indie title of 2016, and one of my favorite games of all time. Back then, there was only one thing that I had felt was missing from Oxenfree: portability, largely because I simply didn’t want to put it down for any circumstance. Now that the spooky adventure is available on Switch, there isn’t a whole lot to complain about.

Oxenfree follows Alex, her brand new step-brother Jonas and a few of Alex’s friends as they make a journey to the fictional Edwards Island for an overnight stay on the beach — a tradition of the Camena High Junior Class. While partying on the beach, Alex, Jonas and Ren (Alex’s childhood best friend) explore a nearby cave, tuning into creepy frequencies with Alex’s pocket radio. Alex inadvertently opens a ghostly rift while tuning into these frequencies, scattering her and her friends to different locations on the island. You’ll learn about the history of Edwards Island by exploring to find your friends and uncover the secrets behind the rift, while also diving into parts of Alex’s past, all while armed with only a radio. 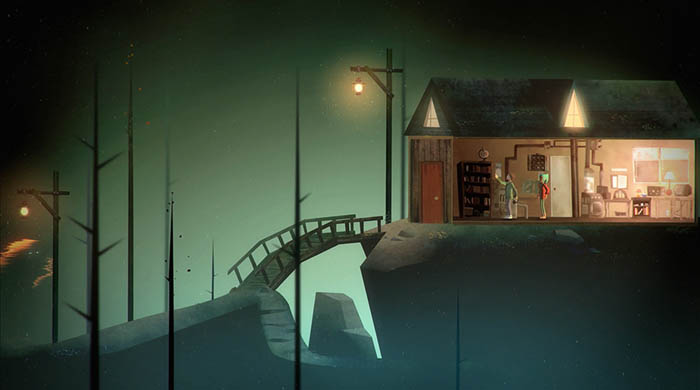 Exploring the island is fun, and tuning your radio into various frequencies to learn about its history is extremely satisfying, especially with how well done the voice acting and radio mechanic are. Each conversation is realistically driven — characters talk over each other and cut off each other’s sentences — and you have the ability to not only choose how Alex responds (or doesn’t), but you also have slight control over the timing of her responses. Tweaking Alex’s personality as you see fit influences each conversation and situation. These choices can cause your friends to hate you, or reveal more of themselves to you as you grow closer. Be careful though, as even the most seemingly insignificant answers can come back to haunt you.

Oxenfree’s story doesn’t seem too out of the ordinary on the surface, but as you uncover more and more truths about Edwards Island, it starts to reel you in, begging you to find the next clue. The story itself, while excellent, doesn’t hold a candle to its characters. Each character is satisfyingly fleshed out over the course of the game, except perhaps Nona (a shyer character), unless you go out of your way to have Alex spend time with her, when given the option. 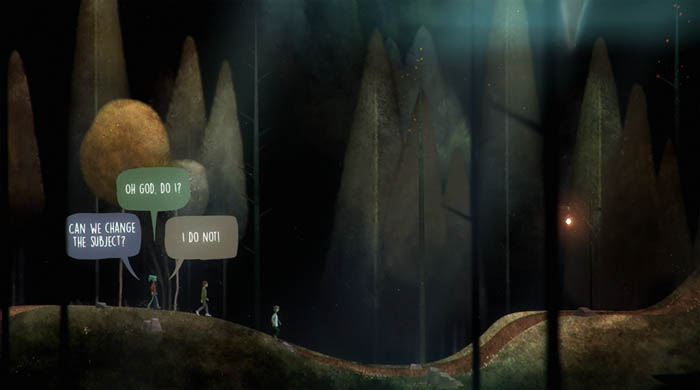 While most media portrays teens as shallow and simple, every teen in Oxenfree is complex, each one dealing with something that isn’t always apparent or on the surface, just like real life. Alex is still adjusting to the loss of her brother in a swimming accident, while simultaneously getting used to the idea of having Jonas as her brand new step-brother, while also dealing with standard high school drama, and — oh yeah — ghosts are trying to possess her friends while all this is going on.

The writing really rounds out these characters and makes it easy to step into their shoes for a moment. Every character also has their own sense of humor, bringing a little lighthearted laughter to the eerie island, while never feeling like they’re trying too hard to be witty. Oxenfree’s characters feel real, and that’s what drew me in and stuck with me; the terrifying, life-or-death premise, is just the icing on the cake. 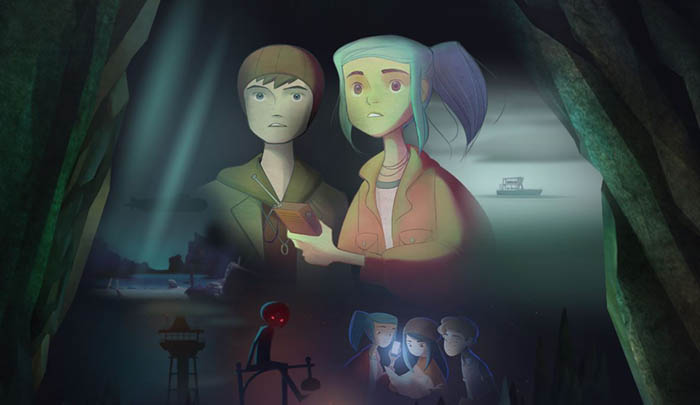 Getting lost in the woods

Oxenfree doesn’t just offer a touching narrative — the immersive scenery, game design, sounds and music all contribute to its haunting and appealing aesthetic. Every bit of land on Edwards Island is shown off by the camera, which is often zoomed out to show large parts of the areas, reminding players that these characters really are taking part in something bigger than themselves. The art style is incredible and slightly creepy, and never feels too bland or too intrusive, whether the characters are walking through an abandoned campground in the middle of the woods or exploring the buildings of an empty military base. These beautiful set pieces are matches with the stylings of the menus, logos, character design and speech bubbles, and they come together gorgeously to present the soul of the game in a visual form.

The sounds of the radio are also a lovingly creative touch, with random frequencies on the island playing bits of audio from the ‘50s, or tapping out Morse Code, or just inherently freaky static. The game takes advantage of the Switch’s HD Rumble; with each frequency you pass there’s a slight tick that comes through the Joy-Con. Slowly slide past the frequency and you’ll barely feel it; cycle through the frequencies in quick succession and they’ll click a little harder as you pick up speed. As Alex pulls herself up on a small ledge you’ll feel the Joy-Con scrape along with her; and the Joy-Con will rumble along with the static from your radio as you hunt down sonic clues all over the island. The realness of the movement felt through the controllers adds an incredible amount of emotion and depth to the gameplay.

Oxenfree’s soundtrack is also phenomenal, which is to be expected from a game that has such a big focus on sound. The immersive tunes that permeate your island exploration are dotted with Morse Code, static and ghostly voices as you wander around. Each theme is beautifully crafted and perfectly matches the feel of every locale. During tense moments the game likes to throw in a pitch change every now and then to make it feel extra creepy, which is a very welcome element. Not every song is downright spooky though — the ‘80s style synth is sometimes swung in the other direction, leading to poppier, more upbeat themes of exploration and wonder.

As incredible and impactful Oxenfree was for me, the Switch version has just a few drawbacks. The often 30+ second load times between areas are incredibly disappointing, and I imagine that for someone just getting into the game, or someone not entirely invested in it, the extra moments waiting could feel unbearable. They definitely started to wear on me when I was quickly moving between sections of the island in order to hunt down collectibles. Near the end of the game I was blessed with just a few instances of quick, sub-10 second load times, but they were not the norm. 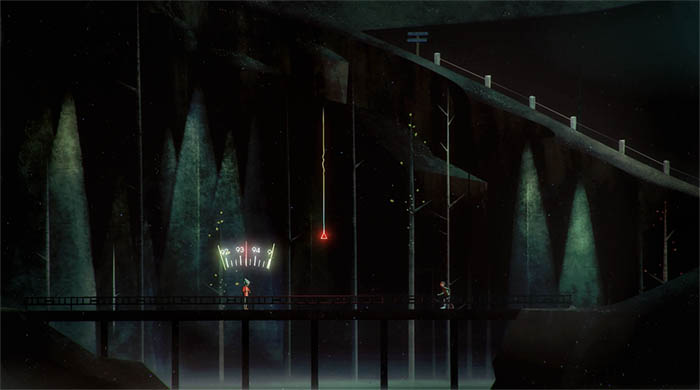 There are also a few visual and audio hiccups, mostly in the back half of the game, where the characters and the music would sometimes skip or freeze for half a second while walking or adjusting the radio. Both of these problems persisted whether I was playing in Handheld Mode or Docked Mode as well, with little to no change in the load times while docked. At times, it seemed the visual and audio hiccups actually got worse when docked, though that’s likely just circumstantial.

Other than those two details, Oxenfree feels right at home on Switch. It’s only fitting that a game about exploring a deserted island has the ability to come with you when you want to go exploring out in the real world. I spent most of my first playthrough on Switch in handheld mode and absolutely loved every single minute of it.

A playthrough of Oxenfree can be pretty straightforward, going from objective to objective and moving the story along with your dialogue choices, but some of the most interesting and memorable story content comes in the form of a few collectibles hidden around the island. The plainest ones aren’t exactly “collectible” though they are interesting, and entirely optional. Landmarks around the island will have informational signs posted near them, indicating that you need to tune into the Guided Tour Station, 102.3, to learn a little bit about the history of the island. There are also secret frequencies, dubbed ”anomalies” marked by piles of rocks all over the island, 12 in total. Flip on your radio near these rocks and find the right frequency in order to unlock them and hear some interesting story tidbits about the island.

The other collectibles are entwined in the story, and their scavenger hunt kicks off in the latter half of the game. These are 13 letters that you can find hidden across the island, each one diving into a little bit of the lore surrounding the rift and the ghosts that Alex and her friends are dealing with. I won’t spoil it for anyone, but I will say that finding each of these unlocks an additional cutscene during the endgame that I wouldn’t have wanted to miss. 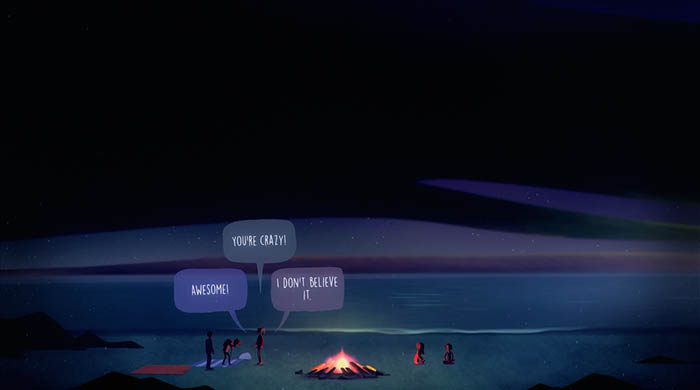 Oxenfree is a pretty short game overall, which is actually kind of nice, since a lot of its value comes from replayability. There are several versions of the ending, and they aren’t all tied together. The best way to describe it is that the ending is in “parts” and each “part” can be influenced by Alex’s decisions, leading to multiple options for your endgame, fit together like a puzzle. There’s also a highly enjoyable New Game+ option, and without getting too spoilery I will say that a lot of the enjoyment from that comes from the fact that each new playthrough can be affected by your actions in previous playthroughs.

I should also mention that the Switch version of the game comes equipped with touch controls in handheld mode, ported over from the iOS release. It gives the game an old school point-and-click feel, allowing you to tap on the screen where you would like Alex to walk, and letting you just tap a dialogue option rather than hitting the corresponding button. Overall, I ended up reverting back to traditional controls, since controlling the radio is pretty awkward when you’re just swiping it to the left or right for several seconds at a time. I’m sure it will appeal to some players though, so it’s a nice touch. 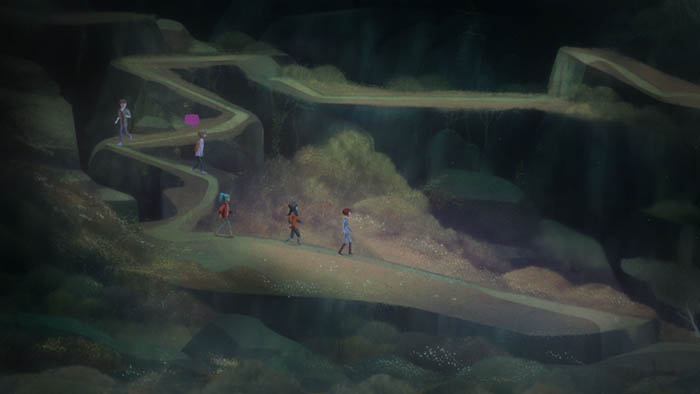 When I first played Oxenfree, I wanted nothing more than to have it with me wherever I went, on a handheld platform. It never made it to Vita, and PS4 Remote Play just never seemed to work the way I wanted it to. When it was finally announced for Switch, my heart soared, and I haven’t been disappointed. I think Oxenfree has found its rightful home on the Switch, and nothing could make me happier. I excitedly blew through my first playthrough in about five hours total, finding all the collectibles, and making choices I hadn’t made before while trying to aim towards the ending I wanted, and it was just as fun and touching as it’s ever been.

There are few games that have felt as emotional and real to me as Oxenfree. It’s an otherwordly game driven by a close-to-home story. The characters feel real, with actual problems giving their decisions weight. It’s more than just a game about kids and ghosts on an island; it’s a complex and interwoven narrative about loss, grief, acceptance and hope. It touched my heart and imagination in all the right ways, and I realize that more and more each time I play through it. Oxenfree was my favorite indie game of 2016, and now, with its release on Switch, I can safely call it my favorite indie game of 2017 as well. 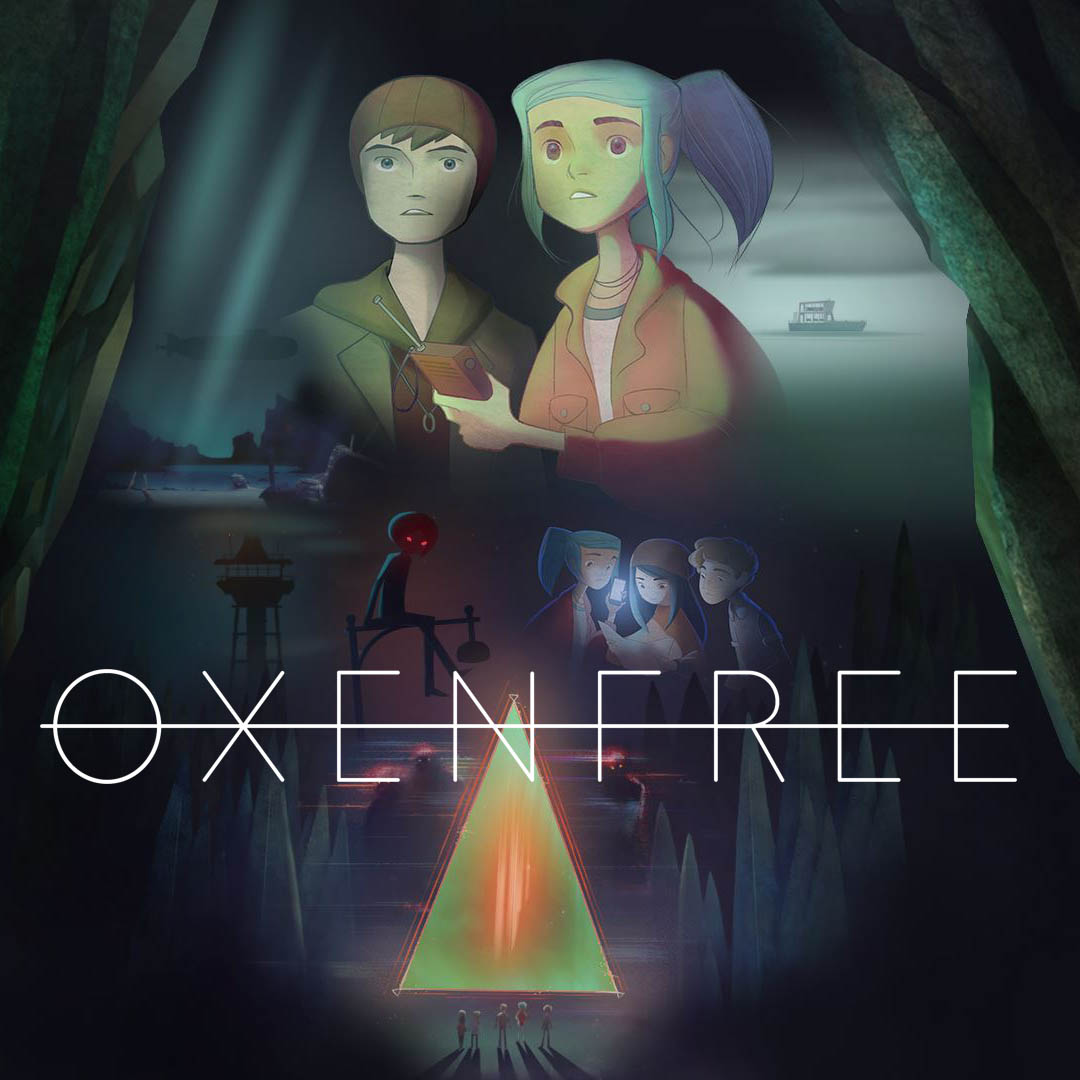