Back in the golden age of gaming, before hand-holding tutorials, online wikis and internet forums reigned supreme, beating games was hard work. Players were largely at the mercy of their own wits when it came to exploring the labyrinths of Zebes or unearthing each legendary piece of the Triforce. It was also a time when game design wasn’t beholden to strict rules or genre conventions, quite frankly because most had yet to be established. For both developers and players alike, there was a palpable sense of discovery driving our button-bashing fingers forward, something more modern games oftentimes take for granted.

Fast forward to the present and I’m astounded by how something as two-dimensional as Kingdom: New Lands can feel just as expansive as the whole of Breath of the Wild, masterfully recapturing that instinctual itch for discovery and perseverance given birth back in 8-bit days of yore.

On the surface, Kingdom: New Lands is a 2D side-scrolling roguelike where would-be rulers don the crown of kings and queens laying dominion over a wild and mystifying kingdom. That description, however, does the game a terrible injustice, as its captivating concept doesn’t fit snugly in any known genre’s box. In fact, the less that’s said about Kingdom the better, as uncovering its many secrets and the sense of accomplishment that comes with figuring out its subtle gameplay mechanics is crucial to preserving its many mysteries. 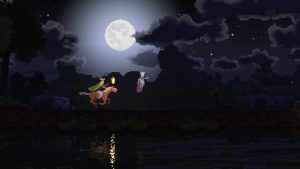 MY KINGDOM FOR A HORSE

Our mounted monarch’s thirst for conquest begins in a wild, untamed wood with little more than a satchel of coin and kingly cloak draped over his back. As players cautiously trot through side-scrolling fields and forests, a ghostly figure of rulers past appears, guiding you and your noble stallion to an abandoned campsite overrun by homeless heathens and downtrodden vagabonds. After brief council on how to govern this newfound settlement, the apparition fades into the afterlife, offering one final piece of sage advice echoing in the wind as dawn’s light approaches: Build, expand, defend.

The newly anointed would soon come to appreciate the weight behind those cryptic words. Throughout your crusade in kingdom crafting, you’ll spend most your time recruiting peasants, building structures and fortifying your capital against a nightly onslaught of depraved demons with a greed for gold – your illustrious crown notwithstanding. Lose your handsome headpiece and it’s Game Over, thrusting your kingship into early retirement as your mighty empire crumbles into ruin and despair. 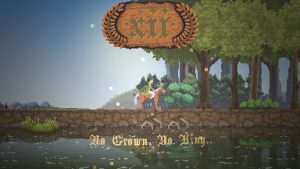 The amount of depth pulled from Kingdom’s minimalistic design is astonishingly admirable, especially considering the simplicity behind its smooth control scheme. Whether out of cowardice or some stuck-up sense of nobility, your emphatic emperor can’t interact with the world or fend off foes directly. Instead, players gallop left and right, tossing coin with the tap of a button towards resources as they fit. Loyal subjects do all the grunt work, be it attacking enemies, bolstering defenses or farming for future prosperity, and it’s up to your royal majesty to delegate these tasks efficiently and accordingly.

Resource management rules supreme in the woodland wilds, with success entirely built on the decisions you make and mistakes you learn from. Hastily pushing forward in the dead of night or investing coin in the wrong venture could prove disastrous for your kingdom in the long haul, unnecessarily sacrificing kinsman or depleting your coffers. This cycle of learning from your many missteps and subsequently strengthening your strategies for future conquest forms the crux of Kingdom’s gameplay, rewarding the most patient of princes with an immense sense of satisfaction and accomplishment. 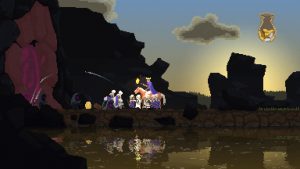 True to its humble heritage, there are no helpful HUDs or supportive stats to aid in your quest for empire expansion. Rather, Kingdom expects you’ll use common sense and intuition to understand and consequently survive its unforgiving world. This is best depicted through visual cues like the tired grunts of your horse, positioning of the sun in the sky or individual coins lining the pockets of your coin purse. The game never explicitly tells you anything outright, effectively recapturing the sense of discovery commonly found back in the 8-bit era of gaming.

Admittedly, once you’ve figured out the formula for crafting an efficient economy, Kingdom’s glittering crown can lose a bit of its sheen. Granted, there’s still an element of luck to contend with — like randomly generated terrain, resources and monster enraging blood moons — which help make each run slightly more unique than the last, but the strategy for survival largely remains the same. Given the inclusion of new lands to conquer in this version, I wish there had also been a tad more variety in each island’s aesthetic. As it stands right now, they’re all simply bigger worlds sporting the same look, offering very little in way of new twists in gameplay, which can take away from the awe-inspired mystery so powerfully present in those initial hours of exploratory play. 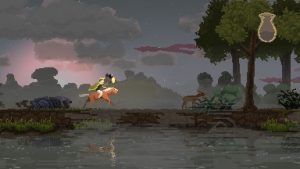 Complementing its gripping gameplay, Kingdom’s gorgeous pixel parallax style paints a whimsical world that beckons to be explored. Small touches like flickering campfires, piercing moonlight and reflective waters give its sweeping vistas and dense forests incredible depth that oftentimes kept me lost in its beauty for hours beyond my intended play time. It’s a stunning spectacle only further compounded by various weather effects and seasonal changes, like fog covered hazes or the encroaching wisps of winter, that help breath new life into its already seductive scenery.

Rounding out the presentation is an ambient soundtrack brimming with an elegantly atmospheric feel. Sound effects like the rustling of leaves, clops of your steed, sharpened slice of a farmer’s scythe and bellows of church bells signaling the dawn of a new day give weight and purpose to each action taken. My only gripe is the significant slowdown present in handheld mode should the nightly scourge run rampant in high volumes. Fortunately, this won’t prove an issue for long as the development team promised a patch is in the works, though it merits mentioning given the potential severity of the frame rate hiccup. 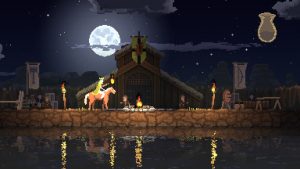 AGAIN, THE KING WILL TRY TO LAST…

In truth, just by writing this review I’ve already somewhat sullied the experience you’ll have exploring every nook and cranny Kingdom: New Lands has to offer. There’s a reason this kingdom crafting caper garnered a cult following of loyal subjects during its royal release back in 2015. Its minimalistic design and striking pixel art harken back to a time when discovery was king and developers bravely pushed the boundaries of what video games could accomplish.

If you fancy yourself a noble in need of nightly courtship, by royal decree I demand you cast some coin Kingdom’s way for one of the most rousing of ventures on Switch yet, lest the night terrors snatch you first. 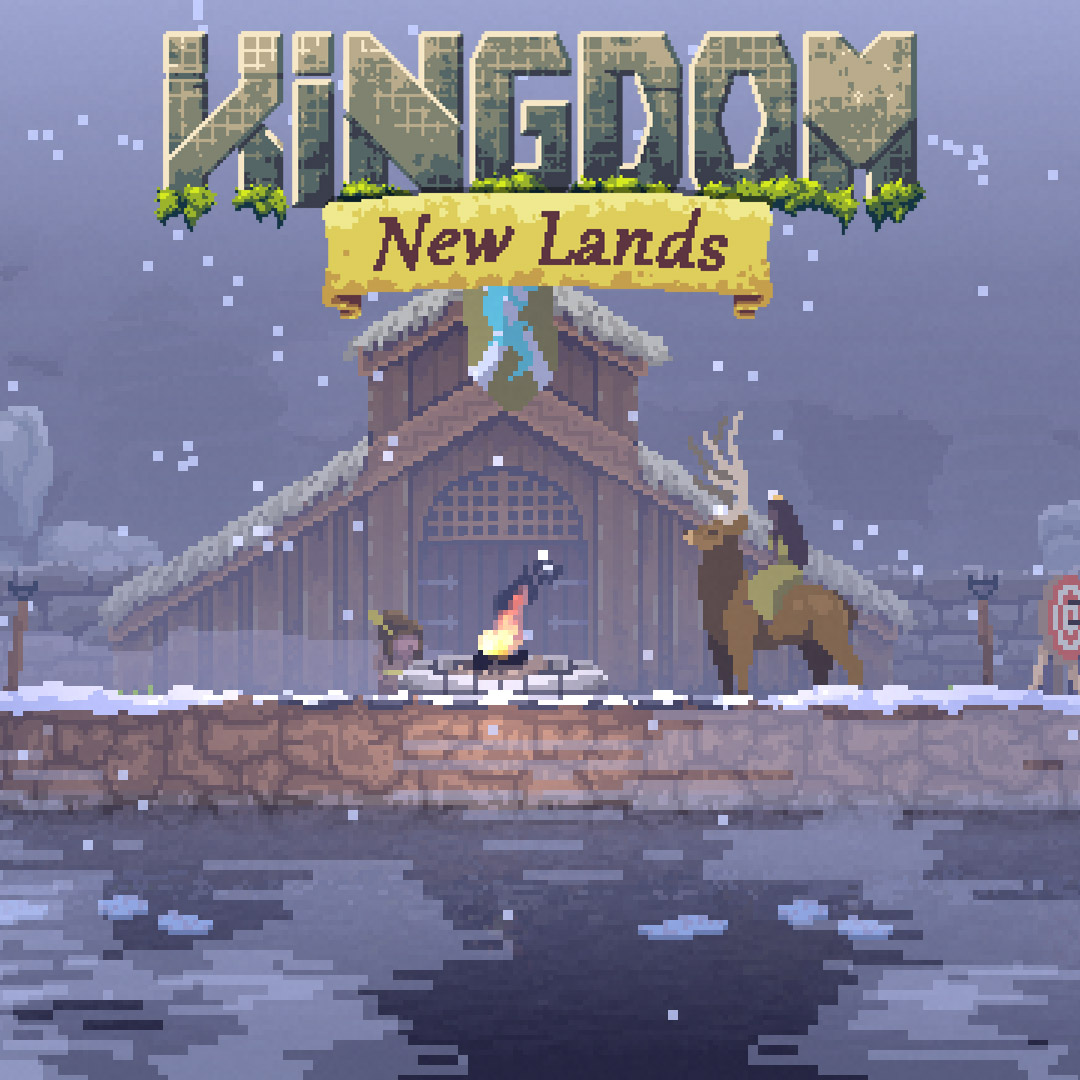