EarthBound is no mere video game. To me, it’s the pinnacle of interactive storytelling, a mastery of form in atmosphere and tone, an artistic triumph of writing and style and the greatest video game I’ve ever played. And to explain why is perhaps the hardest task of all — the thousands of minute nuances that make the game what it is are almost ruined if you list them out in painstaking detail. So instead, it’s better to focus on the broad strokes, and all the brilliance carried within. 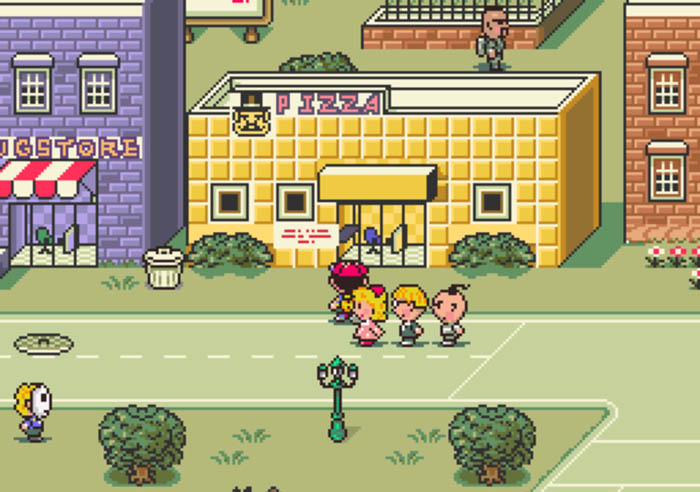 EarthBound’s aesthetic was unusual and unseen at the time, and is still wholly unique even today. RPGs were the domain of fantasy and sci-fi works — the fantastical escapism of speculative fiction, where imagination triumphed over everyday mundanity. EarthBound, instead of tossing out one in favor of the other, combined the two, offering an abstract, often bizarre portraiture of suburbia still grounded in reality, despite the fact that you’re fighting hippies and blue-obsessed cults with only a baseball bat and psychic powers. Despite how goofy and off-the-wall it feels, it also strikes surprisingly close to home in depicting an urban fantasy, which was — and is — exceedingly rare.

EB is notorious for selling poorly when it initially released, due to poor flatulence-based marketing by Nintendo and subpar presentation for the time. But the game’s art and music is simply another layer of its wonderful atmosphere, being a retro-inspired game in an era that was still integrally retro. The bright colors and simple models of Ness and his friends are painfully charming in retrospect, and the soundtrack offers a variety of strange, warped electronica alongside more peaceful beeps and boops to complement the game’s bizarre world. It even used samplings of old songs — a technique basically never used in game music at the time. Everything from the Beach Boys to the theme of Monty Python’s Flying Circus is found in the groovy experimental tracks of EarthBound’s score.

The writing of EarthBound is truly special, far more unique in style than almost any you’d come across in a game. There’s a sense of whimsical sincerity to it, as the game will lightheartedly ask you to be kind and considerate in such an upfront and unabashed way that it skips being cheesy and becomes heartwarming. The NPCs, rather than regurgitate banal info about quests or the storyline, seem to have lives of their own and strange, quirky sayings that stick with you long after the game ends. From that one guy in Twoson you can talk to repeatedly until he gives you money, to the elevator lady telling you not to stare at her hips, to the variety of folk in the Stoic Club offering smug diatribes on the futility of society, there’s no shortage of weirdness — and love. The one that always stuck with me most was one of the first signs of Onett: “The flowers in the garden represent those in your heart. Treat them both well.”

EarthBound’s surrealist humor extends to its little jabs at its very subject. But for everything it ribs — ’50s America, suburban lifestyle, pop culture, B-movie aesthetics and video games themselves — it also seems to genuinely love and cherish them in turn. EarthBound was one of, if not the, first games to constantly notify the player that, yes, it was aware it was a video game, and you should be aware of that, too. From calling attention to the fact that RPGs don’t have bathrooms, to a tutorial dog being possessed by the spirit of a game developer, to Tony flat out asking for the player’s name once you get far enough into the game… the game’s fourth wall isn’t so much a facade as it is a prop, a tool for the game to offer more banter and point out some other amusing discrepancies of the medium in which it inhabits.

While EarthBound’s actual gameplay was somewhat standard for RPGs of the time, it had many benefits that give it an edge over even some of the genre’s more modern titles. The rolling HP system gave you the chance to survive almost any encounter, provided your reflexes were good enough. The balance between your party members, each one serving an explicit and unique role, is superb. And perhaps greatest of all, the game’s auto-win calculation, allowing you to reap the benefits of battles against weak foes without wasting your time mashing A to speed through is unbelievably convenient, and I’m appalled at how few games with encounters have implemented such a genius system.

But what ultimately makes EarthBound ascend to a level beyond any other game is its storytelling. EB doesn’t have a conventional Final Fantasy-style JRPG plot — in fact, its central story of four heroes going to save the world from an alien evil doesn’t seem like much to write about on the surface. Ness & co. don’t really have much in the way of overt character development, and there’s nothing like gray morality, complex motivation or gigantic plot twists to complicate things. So what gives?

To me, the true protagonist of EarthBound 0- the one who changes, develops, and grows as the game goes along — isn’t Ness. It’s the player. With each Sanctuary found, each melody collected, the player witnesses a glimpse of Ness’ childhood, and is brought back to their own. The smell of your favorite food, the loyalty of a pet, the gentle love of your mother — these images and more resonate far beyond the scope of the game itself. The player is left to reflect on their nostalgia, and think back on their childhoods. How far they’ve come, and how much farther they have to go. 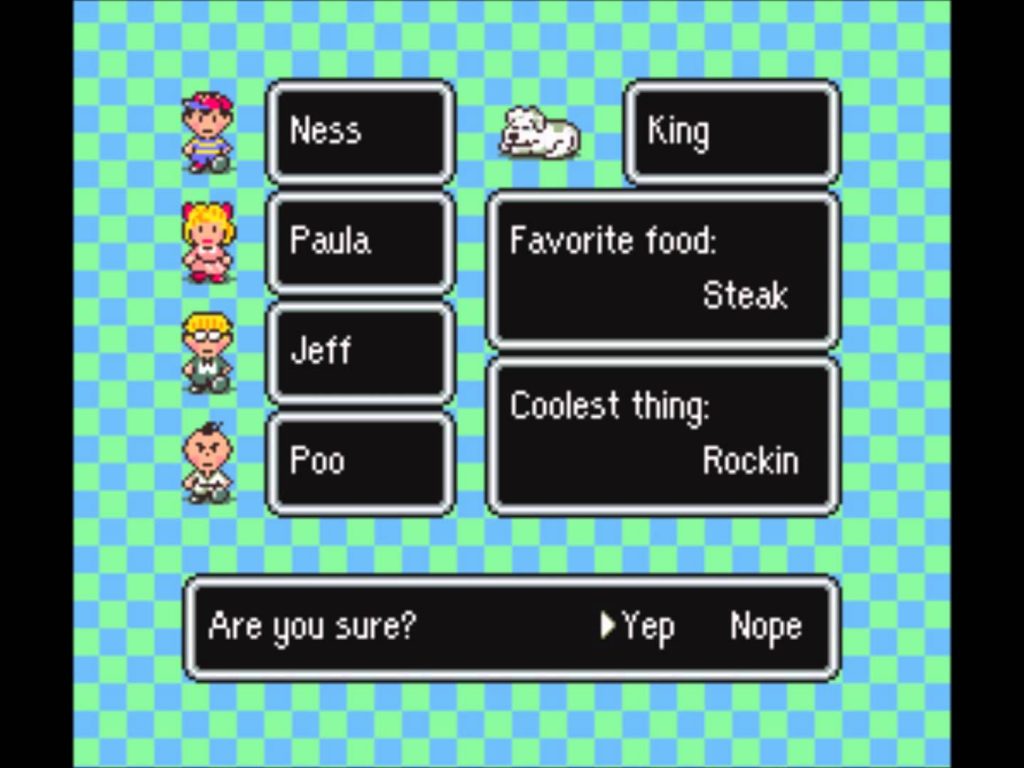 EarthBound never presents its characters as morally corrupt, but neither does it show them as paragons of humanity. Status effects like crying and sneezing uncontrollably are ailments we ourselves have had to deal with. Ness, when he needs money, has to talk to his distant father for help. When he gets homesick, he has to call his mom to hear her voice and feel better. And in the end, he has to face his own evil inside his mind — and come out a better person. The game’s final boss is an indescribable evil without form, because the party lacks the wisdom that comes with age to understand all the ills of the world. We’ve all had times like these, and EarthBound flawlessly weaves the truth into the very game — that despite their psychic powers, genius intellect or stalwart courage, Ness, Paula, Jeff and Poo are just kids. Just like we all were at one point.

That was the lesson I took away from the game the most, that the sense of childhood wonder and fear that we all possess never really goes away in its entirety. Even though I’m grown up, I still lack so much understanding about the world, and I still have so much room to grow. I first played this game in middle school, and it reassured me that imagination, memories and nostalgia never really go away — we always carry a little bit of them inside ourselves. Humans are beings of great potential, but we all make mistakes. We all have limits. We are all flawed.

We are all earthbound.