My first foray into Final Fantasy was the franchise’s seventh entry, Final Fantasy VII — a timeless classic that is widely regarded as one of the most influential and important RPGs ever made. But while I enjoyed my time with Cloud and his moseying gang of misfits, it didn’t grab me to the extent that I thought it would. Maybe it was the outdated presentation, maybe it was the fact that the game’s biggest plot twist was known to everybody on the face of the planet; but whatever the case, FFVII never quite hit that level I was expecting it to. It was great, but not the greatest.

About a year or two later, I felt the urge to try another entry in the series. I can’t even remember what made me interested in Final Fantasy VI in particular, but I decided to give it a go. Immediately, upon the dramatic opening title screen ringing with the notes of an organ, I felt drawn in. And moments later, during the opening credits crawl, as a brainwashed Terra and her two commanders solemnly marched in the snow towards Narshe, I could feel it deep inside — this game would be special. 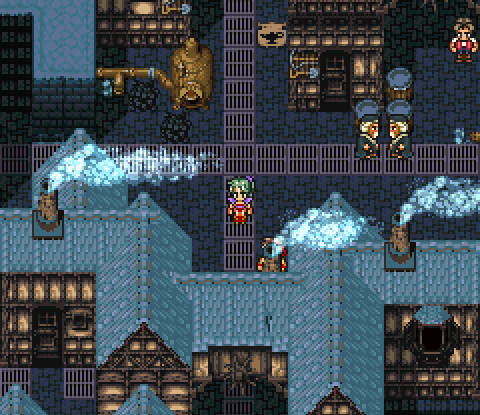 Final Fantasy VI is one of those exceedingly rare games where almost every aspect of it is perfect. The characters and story are impeccable. The graphical style is charming and timeless. The combat is simple, yet varied. The soundtrack is one of the finest ever composed. The game’s pacing is well-suited to drawing you into an atmosphere of quiet melancholy, before the plot slowly unravels to reveal a tale of tragedy, loss and hope.

FFVI’s presentation is a testament to the enduring power of the 16-bit age, as even though its graphics were quite impressive for the time, they still manage to have great appeal today. Characters are expressive, monster sprites are detailed, and the game’s color palette is one of the few of the era to strike a more muted tone. The music, meanwhile, is nigh-flawless – Nobuo Uematsu’s best work is on display, and the entire soundtrack has a score of fantastic tracks. The hopeful somberness of Terra’s theme, the fast-paced and explosive boss battle music, the bombasticity of the opera scene… all of it is expertly crafted and demonstrates a huge array of styles on the SNES sound chip. The king of them all, of course, is the final boss theme, “Dancing Mad,” which is the only game song I’m aware of that has movements in it. Even now I listen to it when I have a daunting task ahead of me.

VI’s battle system isn’t particularly revolutionary for the series, but it hits the nail right on the head when it comes to what I look for in a Final Fantasy — each character is somewhat flexible in how you develop or outfit them, but they also have unique abilities that set them apart. From fairly basic skills like Locke’s Steal or Edgar’s Tools, to the truly creative like Sabin’s fighting game-inspired Blitz to Cyan’s patient Bushido, or Gau’s complex monster-aping Rage ability. It’s not entirely balanced, but it is fun to use each character’s abilities in creative and unique ways.

Speaking of unbalanced — the game’s Esper system, allowing characters to learn magic and get stat boosts when leveling up, is also tons of fun. Setting your more magic proficient characters to nuke the opposition with spells like Flare or Ultima is always fun, and even before you get to the late game there’s a lot of choice in how you develop characters. This system is often what draws me back to Final Fantasy VI all these years later, even as it’s long become evident how finicky it can be. 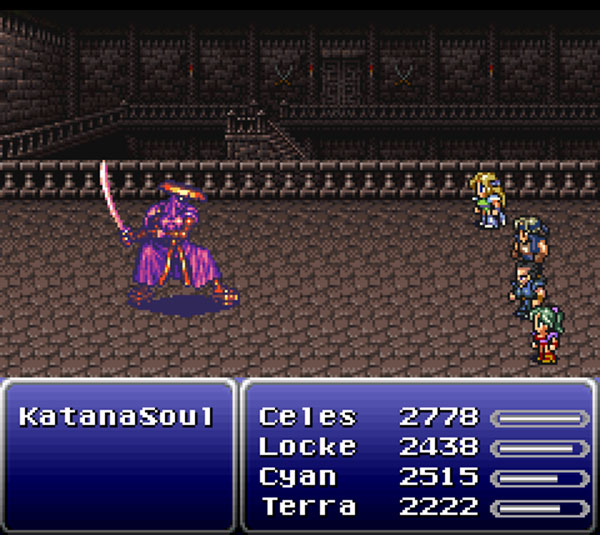 Of course, The game succeeds most of all due to its large and impressively complex cast, all of whom are struggling to find happiness in a world of strife. From the deep regrets of Locke and Setzer, to the tragic pasts of Cyan and Gau, to the lonely wanderings of Celes and Shadow — the game boasts one of the largest casts in the series, with 14 playable characters to choose from, the majority of which are intriguing and exceedingly human.

Of course, the game’s primary protagonist and antagonist arguably shine greater than all the rest. Terra, a lost, amnesiac young woman with unique magical talent, finds herself disturbed by her own power and ostracized by society. Even her allies seem to want her abilities for their own ends, and she struggles with the idea of even being human. Meanwhile, the nefarious Kefka is one of the greatest villains in video game history, spouting off memorable line after memorable line in his nihilism-fueled quest for destruction. Terra’s quest for love and happiness has made her one of my favorite characters in any game, while Kefka’s pure memorability and loathsomeness had done the same. 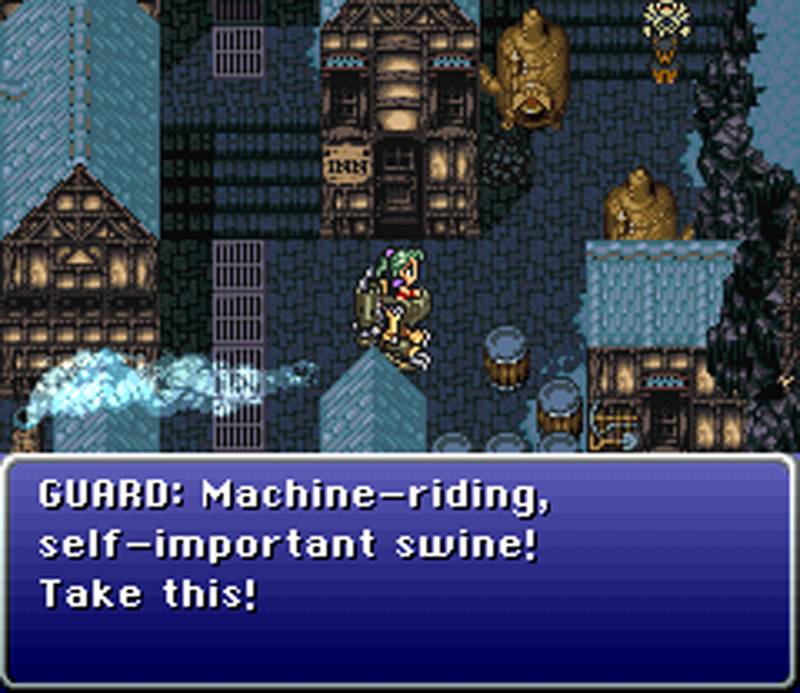 I could go on and on about all the other intricate things that make Final Fantasy VI great — the huge array of side quests, the gut-punching emotional moments, the huge turn in the plot halfway through the game — but the game is about more than just the sum of its parts, and to me is far more than just another RPG.

Final Fantasy VI is ultimately a game about finding your place in the world. About looking for happiness in the darkest of times. About never abandoning your hope, even in the deepest of despair. I played this game in middle school, when I didn’t have many friends and was going through one of the more awkward phases of my life. Seeing Terra look for a reason to exist, and a way to be happy… it really resonated with me at the time, and even now. There are other gems and masterpieces in the series, and ones that are absolutely worthy of the praise heaped upon them, but to me, VI will always be my Final Fantasy.