Thanks to Other M’s convoluted sense for storytelling and the recent Federation flop of 2016, the future of the Metroid series was tossed into turmoil. Longtime fans like myself, who have been around since Justin Bailey’s’ 8-bit debut, have feverishly hoped for a series return to form, complete with a fixation on exploration and affinity for adventure. Year after year, the ghosts of E3 past would rear its ugly head and ignite our hopes with thinly veiled promises pulled from the many Metroid-sized pins decorating Reggie’s lavish lapel. Yet they always ended in debilitating disappointment, effectively lowering fan morale and decreasing our chances of ever giving the Chozo chosen another shot on the spotlight.

Imagine my surprise when Nintendo’s E3 2017 presentation announced not one, but two Metroid games would be blasting their way to modern consoles. While the mere mention of Prime 4 set the entire Nintendo Wire team in a Phazon-induced frenzy, it was Samus’ return to her 2D side-scrolling roots that had this shameless fanboy clicking his Space Jump Boots with glee. Not only because I’m a lifelong sucker for both handheld gaming and two-dimensional platforming, but the criminally underrated Game Boy adventure has long been one of my favorite series entries to date due to its emotional ending and countless contributions to the series’ lore.

So slip on your Varia Suits and polish those Plasma Beams as I Power Bomb through why Samus Returns is the long-awaited Metroid outbreak both seasoned veterans and prentice parasite pummelers deserve. 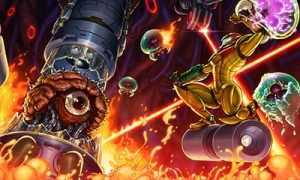 Right from the get-go, it’s clear Returns is a fairly faithful reimagining of the 1991 original’s monochromatic mission in Metroid eradication. Players step into the space boots of shoulder-padded protagonist Samus Aran as she braves the depths of SR388’s core to wipe every last brain-sucking parasite from the face of their home planet. Sticking close to its retro roots, each sectioned off ‘Area’ requires the demise of every floaty foe in the vicinity before allowing our intrepid hero to delve deeper into its cavernous expanse below.

This linear structure undoubtedly won’t appeal to sequence breaking speedrunners, though it should prove a perfect introduction to rookie hunters looking to dip their toes in the series. Before you panic, fellow Metroid maniacs, rest assured there’s still plenty of nooks and crannies hiding all manner of potent power-ups and coveted collectibles scattered about SR388’s surface. Keeping true to tradition, classic themes of exploration and isolation are alive and well, perfectly capturing the claustrophobic feel and ominous ambience of its 8-bit influences. 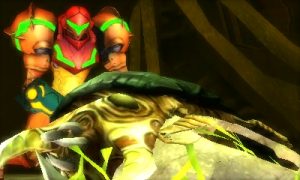 SIGHTS AND SOUNDS OF SR388

While I’m personally a sucker for Super’s SNES-style sprites, there’s no denying the stunning spectacle of Returns’ 2.5D aesthetic. Pushing the 3DS hardware to its limits, environments are richly detailed with all manner of malignant monstrosities lurking about in the background. Whether traversing crystal-covered caverns or the purple, misty hues of its many poison-watered grottos, there’s little shortage in ecological variety strewn about the planet’s punishing pathways. Though most impressive is the astonishing level of detail given to the blonde-haired beauty herself. Whether running ‘n gunning at full speed or calmly crouched on one knee with her sights set on looming threats below, Samus always manages to come out looking like a bodacious badass, especially with the stereoscopic 3D cranked up high.

My only real gripe with the visuals is the relatively muted color palette, resulting in each of the game’s many maps feeling no more or less distinguished from the last. Instead of iconically themed locals with distinctive environmental characteristics, like the acid baths of Brinstar or the metallic pipelines of Tourian, Returns complacently aspires to mimic the Game Boy original’s many numerical zones without any real sense of personality. Granted, the molten caverns of Norfair did get some time to shine, as featured throughout multiple scattered mini-zones, but the lack of cohesive consistency in the world’s design doesn’t do the game any favors. 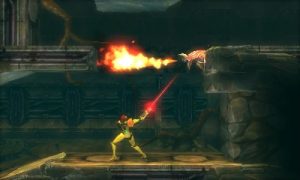 Fortunately, the stellar soundtrack more than makes up for this blunder, perfectly complementing the atmosphere of being a lone entity exploring a strange alien world. Many borrow heavy inspiration from classic Metroid medleys, with the modern rendition of Metroid II’s surface theme proving a particular favorite. The game’s sound design is equally seductive, filled with nostalgic nods to Super Metroid’s Game Over screen to convincing whispers that’ll leave you questioning whether pesky parasites are lurking in the far reaches of your bedroom closet.

Outside its graphical facelift, Metroid Returns features some of the most fast and fluid bounty hunting this Zebian zealot has ever seen. Outside series staple screw attacks and space jumps, Samus comes packing a host of new tricks tucked under her super suited sleeves that make traversing SR388’s subterranean surface an absolute blast. Both a powerful counter melee move and 360-degree aiming module help flesh out her arsenal to devastating effect, the latter of which provides pinpoint precision to each plasma-beamed burst. Well-timed melee strikes, on the other hand, prove perfect in a pinch for those who want to get up close and personal with their prey, with uppercutting the Metroid menace triggering impressive cinematics filled with fancy missile barrage action. Couple that with the likes of ledge grabbing, wall grappling and instant morph balling and you’re left tangoing with one of the most versatile movesets in the buxom bounty hunter’s 30 year career.

The weapons cache doesn’t empty there, as newly implemented Aeion abilities make up the remainder of your ardent arsenal. While occasionally used for light puzzle solving, these hidden relics prove immensely helpful in surviving the harsh climate of SR388. The Beam Burst, for example, supercharges Samus’ arm cannon with rapid fire ferver while the Lightning Armor shields her power suit from sustaining a lick of damage. They’re essentially easily accessible cheat codes for all you Metroid rockin’ rookies in need of assistance, yet completely optional for more battle-hardened hunters. This is made no more apparent by the Scan Pulse: a radar pinging power-up that reveals a small subset of the map, including breakable blocks and secluded secrets. While some might find its use detrimentally game breaking (and I wouldn’t recommend relying on it much for your initial playthrough), it’s a welcome addition for desperate delinquents in need of a little guidance that helps negate the tedium for searching FAQs online. 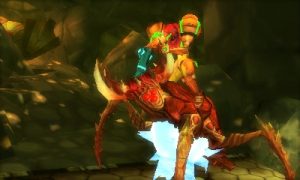 Yet for all its exciting additions, combat does have a tendency to get a bit repetitive around mid-game thanks in large part to a relative lack in creature variety. Beyond the occasional palette-swapped critter, the biggest offenders are undoubtedly the Metroid minibosses themselves due to their limited diversity. Throughout your genocidal journey, you’ll fight dozens of the same evolution before eventually encountering the next beefed up baddie, only to have the monotonous cycle repeat itself. While I understand the desire to remain faithful to its source material, I see little reason not to have thrown one or two more designs in the mix given the excessive liberties taken to improve other aspects of the game – especially when the entire narrative leans so heavily on exterminating a whopping 40 of the little buggers.

THE GALAXY IS AT PEACE

Despite being labeled a modern remake of its humble Game Boy beginnings, Samus Returns is in truth a much-needed reboot of the 2D Metroid formula and poignant reminder of why I fell in love with the franchise in the first place. Mercury Steam struck a beautiful balance between both honoring the past and injecting new life into SR388’s ecosystem, recapturing the exploratory sense of discovery the series is most famously known for.

Admittedly, it isn’t perfect, suffering from the same repetitive boss battles and drab environments plaguing its inspirational counterpart, but for those who can look past its minor mishaps (and you should), you’ll find one of the best 2D Metroid games this side of the galaxy. 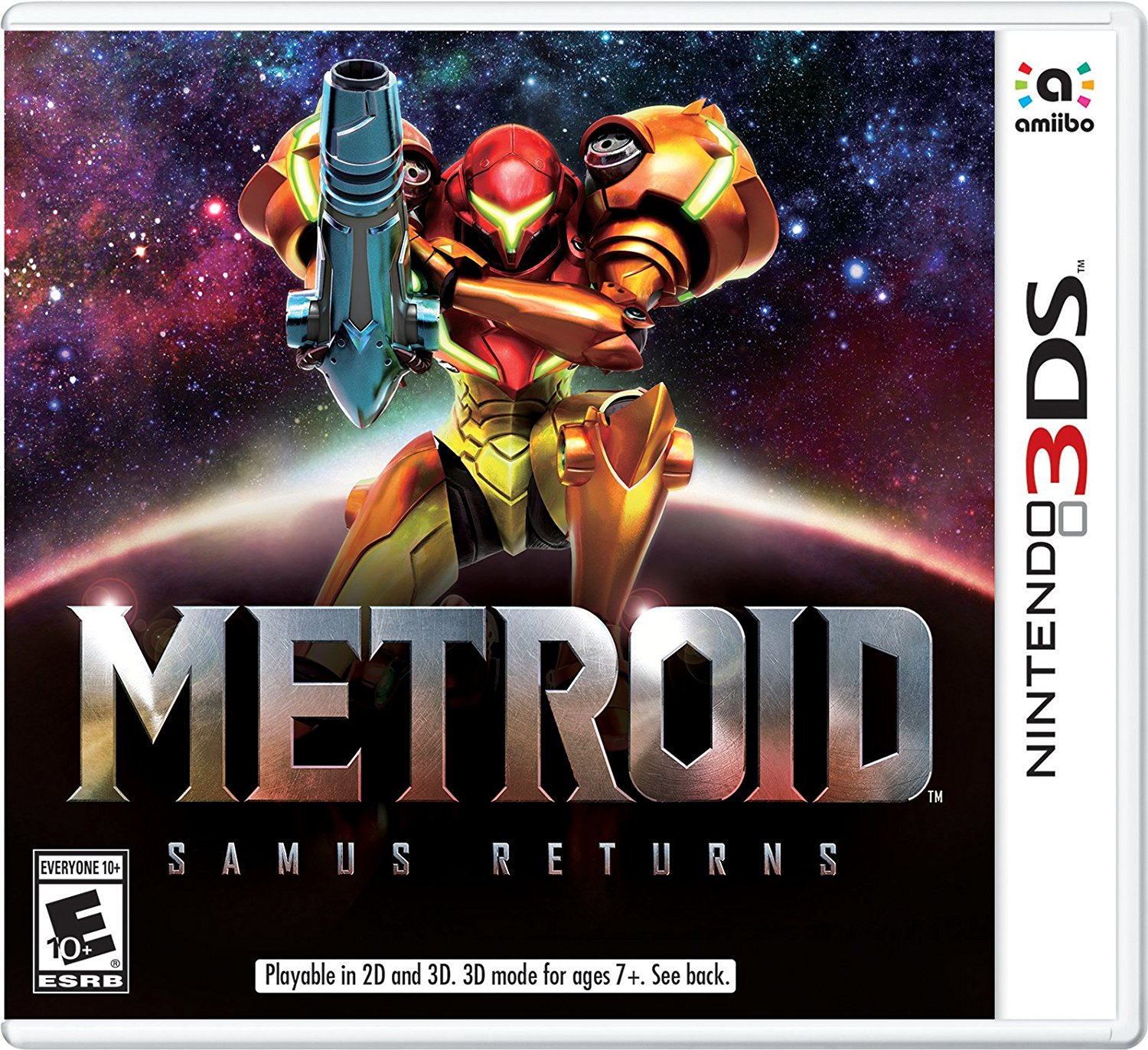