When someone can point to Metroid Prime Pinball as a more accurate representation of the series’s more amicable attributes, you know you’ve done something horribly wrong.

A highly controversial spin-off of the titular series coming in cold after a six-year hiatus, Metroid Prime: Federation Force was perhaps doomed from the start. It favors FPS combat and multiplayer over elements of exploration and isolation, a super deformed, cartoon art style not in line with the series’s more mature themes and tones and generic soldiers piloting mechs over beloved series protagonist Samus Aran. What longtime fan wouldn’t be outraged?

Though, here’s the kicker: remove the Metroid Prime moniker and what you’re left with is a highly polished, well-designed and fairly competent cooperative shooter worthy of the genre. While not entirely without its flaws, Federation Force’s graphical fidelity, sound design and intuitive controls are impressive feats by 3DS standards and each of the game’s 22 missions are chock-full of fresh ideas to keep the action from getting stale. As a standalone product, I have no doubt it would have been critically received under much less scrutiny. Unfortunately for Federation Force, we live in a world where words mean things, and the Metroid Prime name in particular comes with an abundance of gameplay expectations and thematic implications.

In the end, there’s no sugarcoating it: Federation Force disappointingly fails to capture the essence of the Metroid series in any meaningful way.

The galaxy is at peace…

Canonically speaking, Federation Force picks up shortly after the Phazon crisis of the Metroid Prime trilogy. The galaxy is in turmoil having once again just narrowly averted the Space Pirates’ latest foray in bioweapons technology. Feeling helpless in the war to come (and perhaps a little tired of Samus getting all the fame and glory for cleaning up the star system any time a Space Pirate sneezes), the Galactic Federation launches Operation Golem: a top secret project to develop armored mechs based on Chozo technology found in Samus’s Power Suit. Piloted by an elite squad of specially trained marines, these hulking robotic suits of armor would finally give the Federation both tactical and technological superiority over the looming Space Pirate threat. 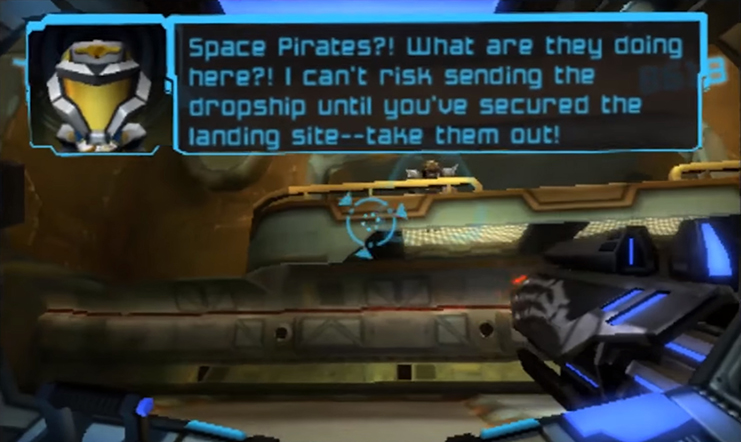 This simple yet concise narrative serves as a perfect prelude to the game’s rather unconventionally non-Metroid-esque structure. Much like Luigi’s Mansion: Dark Moon, Next Level Games developed Federation Force with portability in mind, spreading the action between nearly two dozen bite-sized missions. Admittedly, this decision to focus on tight, objective-driven stages makes a lot of sense from the perspective of designing an accessible, cooperative multiplayer shooter — especially for handhelds. It allows for more fluid matchmaking, quicker play sessions and endless replayability.

Unfortunately, it also comes with the detrimental side effect of sacrificing the themes of isolation and exploration that lie at the heart of the Metroid franchise. Gone are sprawling, open worlds teeming with mysterious alien life forms and secrets just begging to be discovered, and in its place is a paltry mission select screen of highly linear, disconnected and claustrophobic mini-maps. This loss of wonder, fear and excitement that makes exploring the world of Metroid memorable is perhaps Federation Force’s greatest sin, which left a sour taste in my mouth throughout its 10-12 hour campaign.

Fortunately the missions themselves are both fun and varied, with no two ever coming off alike. Whether herding ice titans into cages, transporting precious cargo through volatile electrical storms or stealthily infiltrating enemy strongholds outside the comforts of your armor, each mission provides new twists and turns to keep your team of mechanized warriors on their toes. Regrettably, they offer little in way of exploration sans searching for hidden mod chips to boost your mech’s abilities (more on that later), though occasionally a mission’s optional secondary objective might have you venturing (ever so slightly) off the beaten path. This ultimately adds to the game’s replayability, as you and your squadmates are scored and awarded medals based on your performance. 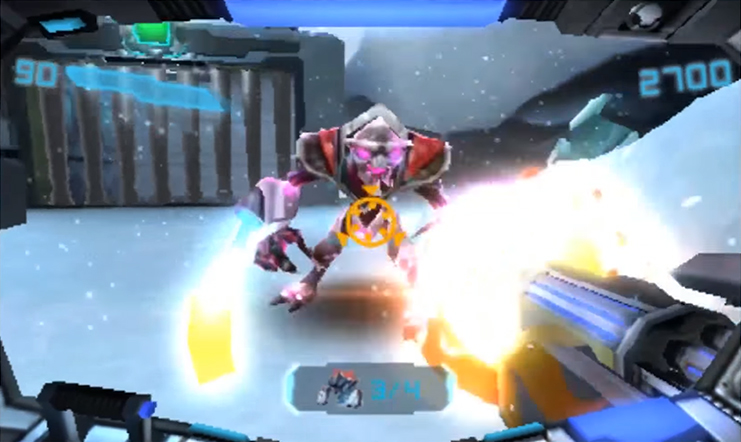 The entire campaign can be tackled alone, albeit with a lot of patience, perseverance and luck. The problem is that missions, unfortunately, don’t scale in difficulty based on the number of players available. Enemies are just as tough, environments are just as hazardous and there’s no chance of being revived by teammates should your mech perish in the heat of battle (especially frustrating with one-hit kills, of which there are plenty). Missions are also specifically designed with cooperative play in mind, with each squad member assuming various roles and responsibilities to complete objectives and puzzles as efficiently as possible. Borrowing from previous examples, attempting to both push and protect cargo from an onslaught of Space Pirates and electrical storms is a nigh impossible chore without a buddy in tow, as is herding giant ice titans into cages without decoys or chipping away at a boss’s health without suppressing fire.

Simply put, undertaking missions Han-style isn’t recommended, no matter how determined you are to try and inject a sense of isolation into your play session. While there’s a special upgrade restricted to solo play that lets players dish out twice the damage while receiving only half in return, it’s not nearly as effective as having a team of comrades watching your back — especially true in later missions. Not to mention equipping this chip bafflingly nicks your mission score, undermining its entire purpose and functionality. This is especially aggravating for completionists hell-bent on collecting medals and unlocking paint jobs to give your mechs a slightly more personalized touch.

When I say “slight,” I really mean “slight”, because, sadly, customization options for your mech are bones at their barest. While similar cooperative ventures like the Monster Hunter series revels in showering players with a deluge of customizable weapons, outfits, gear and abilities, Federation Force seems perfectly content just dipping its toes in the kiddie pool. For starters, every squad member is outfitted with the exact same standard beam cannon for the entire game. Yes, you read that correctly. Outside of its powerful-but-sluggishly-slow charge shot, it’s fairly weak and not terribly fun to use: a more compounding problem given the game’s anemic variety of weaponry overall. 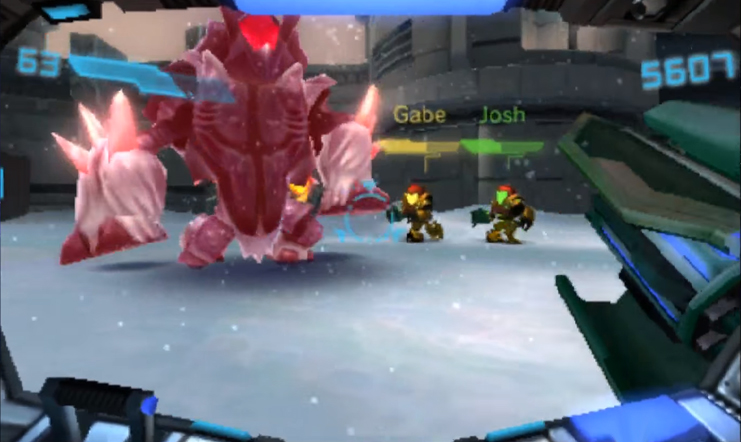 Instead of building up an array of powerful new weapons and abilities through traditional progression and exploration, Federation Force unfulfillingly hands you the rest of your munitions right from the start. Before each mission, mechs choose between a limited pool of secondary weapons, ranging from repair capsules and shield generators to decoys and ice missiles. These sub weapons don’t do a very good job of tapping into the series’s vast and varied arsenal, either, with both wave and plasma beams being incomprehensibly absent. They also tend to run out of ammo fairly quickly, forcing players to mostly rely on their feeble primary weapon to get the job done. For a game meant to focus on the shooting mechanics of the Prime series, it’s astounding how combat fails to be its strong suit.

Still, good teams will try to balance out their loadouts to fulfill specific roles, such as dedicated healers or elemental weapons specialists. These roles can be further enhanced by equipping special modifiers hidden throughout missions, boosting variables like damage values or the duration of specific abilities. However, absent of both proper voice chat and a more concrete class system, strategies rarely play out as planned (especially when playing online with strangers). Far too often I encountered players who simply horded all the best weapons for themselves regardless of what it meant for team composition, rendering certain mods I had equipped completely useless.

Bright Side of the Moon

I have to admit, despite its controversial chibi art style, the level of graphical polish and attention to detail Next Level Games provided is outstanding. The three visually distinct planets of Excelcion, Bion and Talvania stand out in particular, all sporting discernibly contrasting ice, fire and industrial settings highly reminiscent of those seen in other Prime games. Small touches like secondary weapon icons being visually represented on your arm cannon, or the different colored visors on mechs to tell different players apart are welcome additions that really help heighten the gameplay experience. Also, while few games tend to utilize stereoscopic 3D in truly meaningful ways, the added depth perception helped me feel at times like I was actually behind the visor of one of these mighty mechs. The game clearly pushes the 3DS hardware to its limits, and a lot of work clearly went into making Federation Force feel like a proper game in the Prime series. 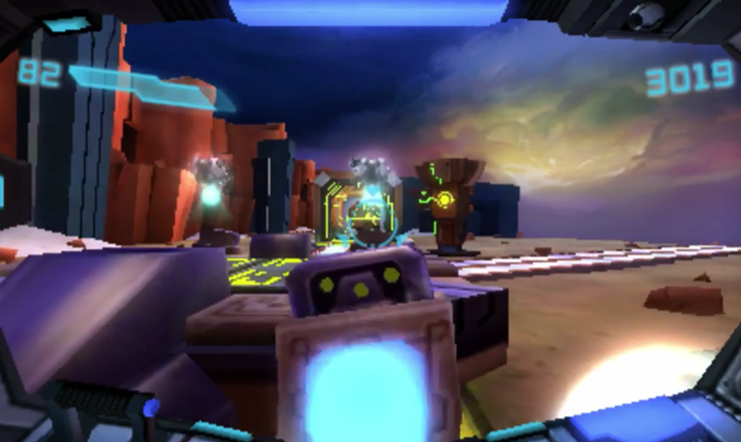 The same praise can be extended to Federation Force’s fantastic sound design. Audio effects are put to great use, effectively communicating the impact and power of each and every weapon. The unbridled release of charged plasma shots in particular carry immense weight with each pulsating blast, and I could listen to the metallic pings from smacking Blast Ball’s oversized spheres around all day. Elsewhere, tracks appropriately shift from eerie and mellow undertones during more quiet moments to tense, adrenaline fueled beats when in combat. This appropriation of mood and tone invoked on the player through music is perhaps the most Federation Force has in common with traditional Metroid titles aside from sharing a title. My only gripe is that none of the tracks are very memorable beyond the game’s menu theme, which I mainly attribute to copious amounts of time spent waiting in lobbies for other players to join my game.

A lot of effort was also put into adapting the control scheme of the Metroid Prime series to the restrictive confines of a handheld. While tough to grasp initially, I found the default gyro controls worked well for more precision aiming, despite the c-stick’s fully adjustable sensitivity settings on New 3DS systems. It’s by no means perfect, but I never found myself cursing at the controls any time my mech bit the bullet or my team failed a mission. For that we only had our poor communication skills and lack of team cohesion to blame.

In many ways I respect Federation Force’s defiantly ambitious attempt to differentiate itself from the established formula and expand the Metroid universe with an entirely new perspective. Fleshing out the Galactic Federation’s role in the war on interdimensional space piracy is a welcome change of pace fittingly told through a cooperative multiplayer lens. I just wish it had done so with more appreciation and consideration to the core values and gameplay mechanics that drew me and its many fans to the series in the first place. It’s a particularly hard pill to swallow, too, when the similar-in-concept Legend of Zelda: Tri Force Heroes successfully manages to offer an entirely new take on its classic formula without compromising series traditions rooted in puzzle solving and dungeon crawling.

It’s sad to say, but despite Federation Force’s moderate success as a competent cooperative shooter, it wholeheartedly fails to mimic anything closely resembling a classic Metroid game, ironically resulting in the most alienating experience in the franchise’s 30-year history.

Leave a Comment
Buy at Amazon Buy at GameStop
6.0 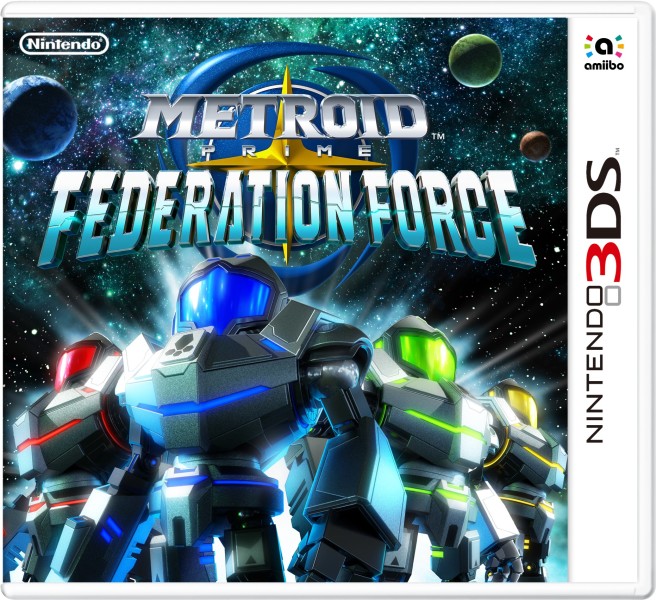