As I stroll over from a merchant stall to the nearby mechanic’s workbench, counting my fresh earnings, I pour over the available options. A pack upgrade means bringing back more ore, which means more coin for further upgrades on the next pass. That’ll mean diving deeper though, so maybe longer lamp light or better armor instead. The pickaxe upgrade can’t hurt; it’s been getting more use than anything else in my growing collection of tools and equipment. My earliest intuition (and that gleaming shred of greed) gets the best of me and I go with the deeper pockets before jumping right back into the mines to keep digging deeper and finding who-knows-what.

That’s just one of many loops I went through in SteamWorld Dig 2 and I haven’t gotten tired of them yet. For those unfamiliar, the game puts you in an alternate, steam-powered world where humans are nowhere to be seen. Instead, robots make up its population; though, due to advances in technology that allowed them to exist, they’re frozen in the time and culture of the old American West. You’ll see plenty of likable and curious characters on the surface, but most of the action takes place down below. 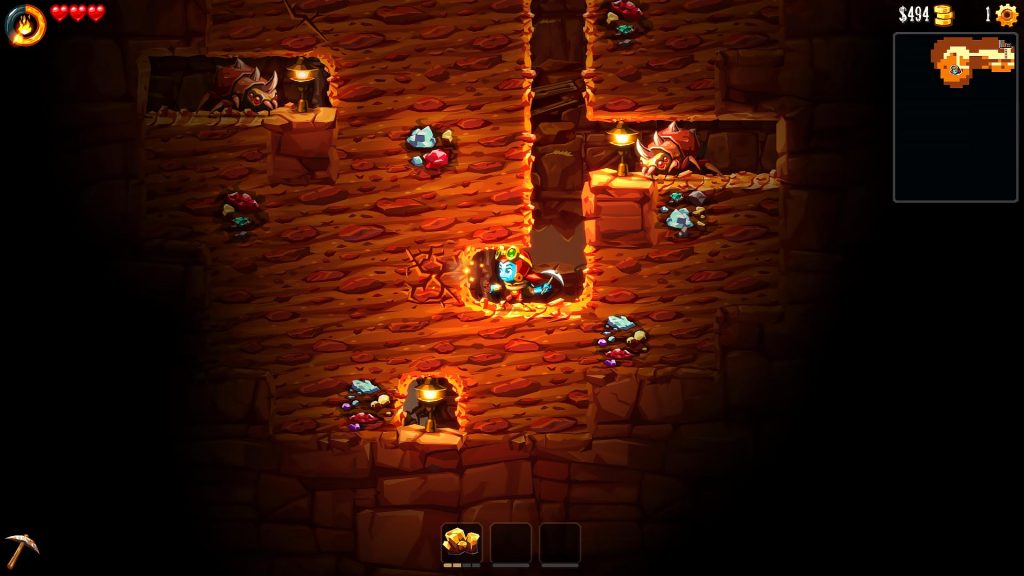 The game’s subterranean map is perfect for exploring, and while digging is repetitious in and of itself, the thrill of discovery overpowers all. Maybe it’s an ore deposit just a few dirt-tiles away or conspicuous bit of dirt wedged into an otherwise stone wall that gives way to a secret cavern, but there’s an addicting sense of wanting to accomplish as much as you can while you’re down below before resurfacing.

All that ore, as well as more hidden or difficult to reach cogs, lets you keep developing your tools and abilities to make exploring easier. Dig deep enough and you may even get yourself a new piece of equipment to fine-tune, giving you even greater underground access. This Metroidvania style serves the game and its world of western robots really well, but it’s important to take note of other influences from some other deep dives. The visuals, feel and underground environments call to mind Spelunky; while enemy encounters, earth carving and falling rocks are giving me Dig Dug flashbacks. 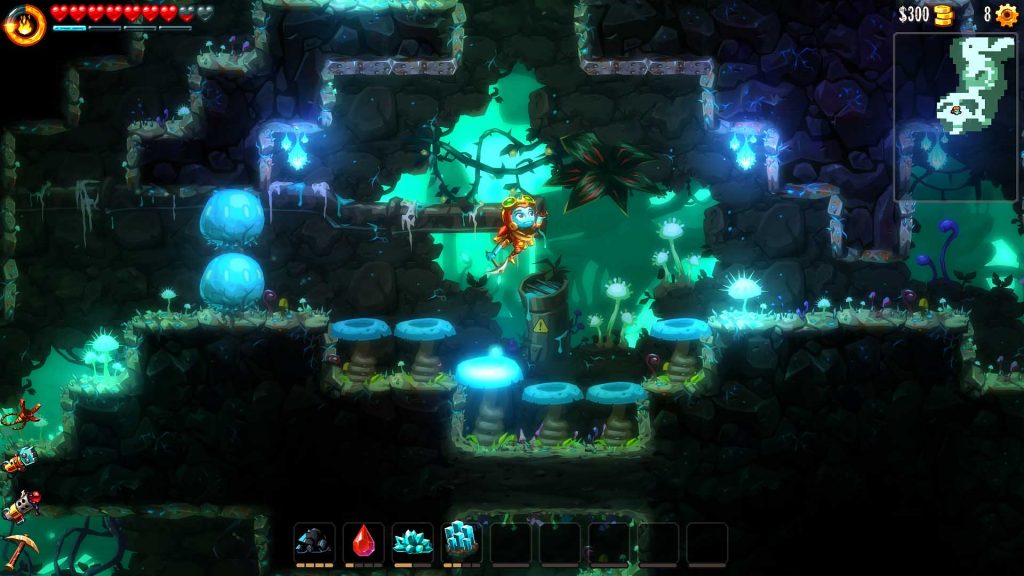 SteamWorld Dig 2’s greatest influencer is its immediate predecessor. The story is a direct continuation of the tale in the first game, with former NPC Dorothy as your new playable character, trying to find the original game’s protagonist, Rusty. The game’s still accessible and enjoyable for anyone who missed the first outing, but there’s much more beneath the surface for longtime fans. I’ll be digging up more on it real soon, and in the meantime, know that it’s looking like a worthy followup to what was (and still is) an addicting and enjoyable game.