Despite taking place in the distant year of 20XX, Mega Man and I go way back. In fact, ever since my first mechanical steps as a bionic busting botling, I’ve been positively obsessed with the titular Man of Mega. I played all his games, bought most the action figures and even watched the (admittedly awful) animated series riddled with cheesy one-liners and brooding evil scientists furiously cursing his arch rival’s name any chance he got.

One year for Halloween, I even dressed up as the famous Blue Bomber, complete with a papier-mâché Mega Buster and plaster-painted bike helmet. What ‘90s kid didn’t want to be a super fighting robot when they grew up?

While I’d never quite reach that coveted career goal, one game came pretty close to making my dreams of melding man and machine a reality. A spinoff released for Nintendo’s superpowered console back in 1993, Mega Man X proved a modern marvel in the world of pixel-perfect platforming, not to mention welcome reinvention of the classic franchise I’d grown to love. With its more mature themes, expanded gameplay mechanics and adrenaline-infused soundtrack, Mega Man X punched the series into overdrive, kickstarting an entire sub-series of action-packed sequels in its wake.

So strap on you Mega Buster and top off your Energy Tanks as I beam you back to a time when blasting bots to 16-bits as superpowered cyborgs was every eight year-old’s dream come true. 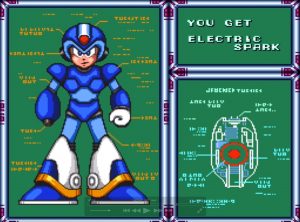 THE FIRST OF A NEW GENERATION

The X series is perhaps best known for overclocking the original Blue Bomber’s 8-bit circuitry well beyond what Dr. Light intended. While traditional mechanics like charge beams and special weapons survived the transition, our brave bot also came pre-programmed with the ability to hastily dash along the ground and leap off walls, invoking incredible mobility and a unique sense of speed over his more classic counterparts. Additionally, X could modify his armor by way of hidden capsules sprinkled throughout the game’s expertly crafted stages. Beyond aesthetic adjustments, each upgrade comes packing a unique punch that made hunting those pesky Mavericks far less daunting. My personal favorite? A souped-up arm cannon that allowed the charging of boss blasters, effectively doubling the firepower of your awesome arsenal. 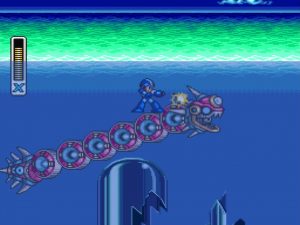 Of course, one of the fundamental aspects that makes the Mega Man franchise so appealing is its knack for letting the player bend the game to their will — which X delivers flawlessly. As expected, Mavericks could be tackled in any order players pleased, and despite each having a critical weakness towards a weapon wielded by their corrupt comrades, it’s entirely optional whether you decide to use them. Equally so are all the hidden capsule parts, health upgrades and Energy Tanks littered throughout, giving players full control over the difficulty of each playthrough as they see fit.

While it’s immediate sequel proved my personal favorite, Mega Man X deserves particular praise for its expertly crafted boss fights and stage designs. Shedding the more humanoid influences of Mega’s previous Robot Masters, each of the eight newly anointed Mavericks were fashioned after all manner of manic mammals and brooding beasts, complete with unique attack patterns that fit well with their respective species. Without much context, names like Sting Chameleon or Flame Mammoth paint perfect pictures of what you can expect in a fight, with Armored Armadillo proving one of this fan’s favorite foes throughout the entire series. Alliteration aside, and despite being one of the harder bosses to beat, this portly critter never fails to put a smile on my face as he pinballs around the room, especially when momentarily shocking him out of his shell with Spark Mandrill’s signature strike. 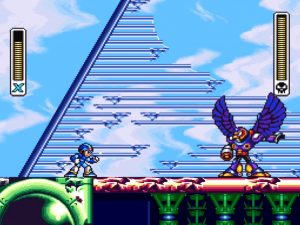 Best of all, each stage is appropriately themed after each mechanical monstrosity, from Storm Eagle’s awesome airship under constant bot bombardment to riding the currents of Launch Octopus’ underwater wonderland. Depending on the order of bosses defeated, some stages would even shift in climate, unlocking new pathways for hidden collectibles or generally making them easier to tackle. It’s a timeless testament to the series that no two levels or boss characters ever feel the same, made more immersive thanks to Mega’s terrific tunes.

While Mega Man games have always been known for their catchy compositions and memorable melodies, it wasn’t until X dashed onto the scene that Rockman truly started to live up to his name. Kicking the cool factor to eleven, Mega Man X featured some of the strongest series serenades to date. Whether the opening stage’s adrenaline-pumped beats or Boomer Kuwanger’s awe-inspiring anthem, each track masterfully mixes the series’ classic chiptune sound with a more modern synthesized touch that’ll burrow deep within your skull’s synaptic hard drive for years to come. There’s a reason the game’s wily octopus and his subaquatic sanctuary are so prominently featured on the game’s box art — well beyond our machine-driven mercenary’s calamari cravings.

Whether it’s your first time slapping on a Mega Buster or hundredth reaping Reploid scum, Mega Man X is well worth rebooting once Nintendo’s miniature machine hits storefronts later this month. Aside from being one of the super system’s most prestigious action platformers, it helped reinvigorate the Mega Man franchise while maintaining the spirit of what made the originals so phenomenal. A more mature story, fast-paced gameplay, creative character designs and a rockin’ soundtrack all culminate into a thrilling package that still holds up today, and leaves me hopeful we’ll eventually see the triumphant return of Capcom’s retro robocop before long.