Anybody who’s followed my writing for a while knows that I’m a big fan of Xenoblade Chronicles, and that I’m awaiting Xenoblade Chronicles 2 with fervid anticipation. Today’s Nintendo Direct not only revealed the long-mysterious release date – December 1st – but a host of information about the game’s world, lore and gameplay. Let’s get to it.

First off was a very lengthy section on world-building. On the world of Alrest exist multiple Titans who are inhabited by the various peoples of the world. In the middle lies the World Tree, and at the top is said to lie Elysium, “an idyllic land of plenty.” The presentation spent quite some time delving into specific kingdoms, states and factions – such as the Kingdom of Uraya, home to many nature-lovers, or the Empire of Mor Ardain, militaristic and masters of machines. Many of these factions are pursuing the “Legendary Blade” known as the Aegis, which appears to have connections to Elysium. This sets up the core conflict of the plot. While this section was detailed and perhaps a bit dry, it provided a lot of interesting information on XC2’s setting, which is one of the franchise’s strongest suits. 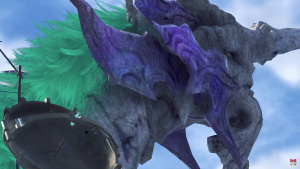 The rest of the trailer is narrated somewhat sleepily by Azurda, the (comparatively small) Titan that the game’s protagonist, Rex, makes his home on. Azurda explains how Rex gets involved in the plot, finding Pyra and setting off to impress her – hardly the most original premise, but simple enough.

Xenoblade Chronicles 2 will have multiple Titans to explore, far more than the two of the original title. Each Titan is said to hold its own varieties of locales and environments, from wide open fields to deep caves within them. Azurda claims each Titan comes with its own “quirks,” though it’s difficult to tell whether those quirks are going to factor into gameplay or simply be story-based. And, of course, each Titan will have a host of creatures to battle (most of which appear to come from the original game.) 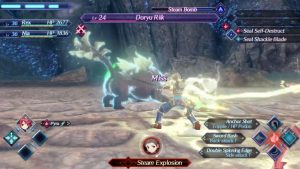 Much of the gameplay details were repackaged and condensed versions of what was shown at the E3 Treehouse. Characters are split into Drivers (frontliners) and Blades (supporters), with the player taking control of Drivers and “equipping” Blades. Drivers have Drivers Arts that function in a similar fashion to the Arts of XC1 and XCX, and what Arts they can use depend on their Blade. Blades, meanwhile, have Blade Arts, which support Drivers from a distance with buffs, heals, etc.

You can create new Blades with something called a Blade resonance, which allow you to form new (usually generic) Blades to equip. Changing Blades will change the weapon equipped and the Arts one can use, and each Driver can bond with multiple Blades at once. Some weapons look quite out there (one shown off brought to mind Blitzball from Final Fantasy X), so I’m sure some will be fairly strange in context. There are also some special Blades you can only achieve via this method, which seem to be more characterized than the generic designs. 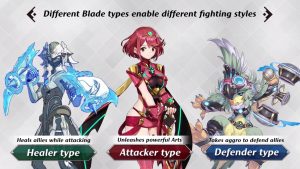 Blades can be one of three types – Attack, Defensive and Healer, and it’s important to adapt properly to the situation, and to which Blades your AI-controlled Drivers are using. Blades also have a Special gauge that, when filled up, can release a devastating attack. There are apparently levels to these Special moves as well, though you’ll have to hone them throughout your journey if you wish to see the higher level ones.

The showcase for XC2 did perhaps drag a little bit, and Azurda’s elderly voice didn’t exactly instill a sense of blood-pumping action into the proceedings, but I still found it to be a satisfying showing. Getting more lore about the world and its people was important on a personal level, and it was nice to get a more concise account of the battle system and its changes. While it might’ve been a bit better to trim some of the lore bits and put them in a separate video, I hope that at least one new person was intrigued by the game last night.

Xenoblade Chronicles 2 will release on December 1st, with a newly announced special edition and a separate XC2-edition pro controller to boot. Stay wired for more information on the game leading up to release.