Project Octopath Traveler was a fairly low-key announcement during the Switch reveal back in January, but its unique 3D pixelated style and nonsensical name were enough to draw some attention. News has been quiet since then, and the title was mostly buried underneath the deluge of Switch news over the past few months… but the recent Nintendo Direct has shed some more light on the title, revealing that the team behind Bravely Default is tackling another retro-styled RPG with a unique aesthetic. 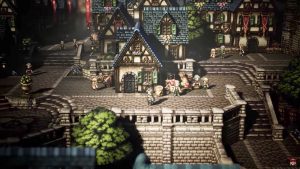 The idea behind Project Octopath Traveler is simple – in the fictional land of Orsterra, players will choose one of eight characters (presumably where the “octo” in Octopath Traveller comes from) and set out on a quest. Similar to Seiken Densetsu 3, which character the player chooses at the beginning changes the story’s perspective and where the characters go – meaning that there’s quite a bit of replay value from the get go. It’s a little unclear if each story has completely unique content, but it seems likely that the eight paths will at least share some aspects, especially since the characters appear in battle together.

The graphical style of the game is very unique, described in the trailer as “HD-2D.” While the characters are rendered in pixel art that’s a level up from the likes of Final Fantasy VI, the environments are detailed in full, low-poly 3D with some very stylistic lighting. The surroundings appear almost like papercraft, and yet come with a very unique sense of atmosphere – coupled with Bravely Default’s subdued art style, it’s dazzling on a visual level, even if the lighting can occasionally come across as just a tad too saturated. 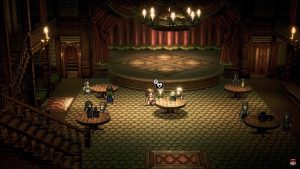 Each one of the characters you can choose has a specific “path action” that will influence how you play each of their adventures. The trailer gives two examples – Olberic, a warrior type who can challenge people to fights, and Primrose, a dancer who can allure others to get what she wants. These skills can be used to different effects – Olberic’s to reveal a rogue, Primrose’s to retrieve a lost person – or in the same manner, such as removing someone in your path. So each character has their own way of achieving their own objectives – “true role-playing.”

The game’s battle system appears to be in the vein of Bravely Default’s, with some significant twists to old JRPG turn based battles. The presentation focuses on the game’s Boost System, where characters will accumulate boost points as they take action. Characters can then expend these points to either power up your attacks or chain them together, not dissimilar to BD’s Brave system. Learning the right time to boost seems to provide the crux of the game’s battle system.

For a game without an official title, Project Octopath Traveler seems to be coming along quite well. It’s visually interesting, the combat appears engaging and tit seems to want to fuse JRPG conventions with the western way of choosing your own path. While it’s clearly got a long way to go development wise, I’m eagerly awaiting Octopath Traveler’s release in the coming year.