Back in a time when muscular men boasting buzz cuts and bazookas rained a hellfire of bullets down upon arcades, there was one testosterone-infused series that stood defiantly atop the trash heap of battered meat carcasses and crushed skulls left in its wake. Part Aliens, part Terminator, and featuring a brotherly duo sporting the battle-hardened backbone of history’s most famous Last Action Hero, Contra’s unique brew of ‘80s action flicks meets trigger-happy gameplay quickly proved a masterclass in both 2D run ‘n gun side-scrollers and bromance beatdowns the world over.

Though there have been more than a dozen entries in extraterrestrial extermination since the series’ coin-operated arcade debut in 1987, few capture the adrenaline rush that comes with setting ablaze an entire alien armada under a beauteous barrage of missiles than Super’s Contra III. Despite a handful of frustrating Mode 7 stages, the game’s dystopian setting, rockin’ soundtrack and tight controls secure its position as one of the best action platformers to ever grace the medium.

So strap on some bandanas and tighten those ammo belts as we draft you back to the battlefield and I personally flex my pecs for what makes Contra’s superpowered sequel worth gunning for.

Welcome to the gun show. 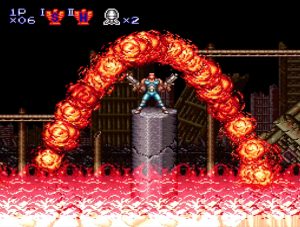 Fans of lengthy CG cinematics and dialogue driven character development need not enlist, as Contra III continues its tried-and-true storytelling mantra of letting the action do all the talking. Motivated by little else than a brief opening sequence ripped straight out of Independence Day and our hunky heroes’ love for revenge and aggressive attack strategies, players quickly find themselves on a manly mission to eradicate the alien menace known as Red Falcon from the planet’s many war-torn cities.

Of course, this kind of campy storytelling and breakneck sense of pacing isn’t all too surprising considering the era Contra III released in. As home console technology advanced through the late ‘80s and early ‘90s, a good number of developers were more concerned with replicating the arcade experience than coming up with innovative new concepts. In retrospect, the SNES was well known for revitalizing its 8-bit influences by simply souping up a series’ already established formula (Super Metroid, A Link to the Past and Mega Man X serving prime examples). In this sense Contra III was no different, transferring the quarter-popping series’ staple gritty attitude, no-nonsense pacing and unforgiving difficulty with flying colors. 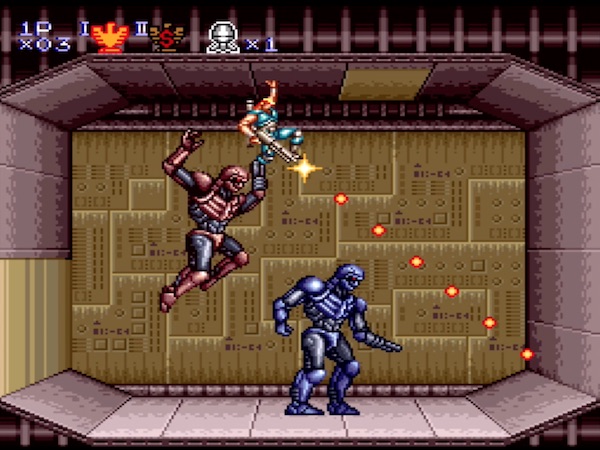 Make no mistake, fellow freedom fighters: Contra III is hard. Throughout your onerous operation in tactical negotiation, you’ll encounter horrific hordes of mutant mosquitoes, parasitic facehuggers, flame-throwing robots, tyrannical terminators, armor-plated turtles and much more — all with the singular goal of tearing your face off for use in their post-apocalyptic puppet show. Adding insult to injury, your meaty muscles can only take a single hit before atrophying, making swift reflexes and diligent dodging a requirement for imploding the invader’s hive successfully. While that may sound daunting to the less battle-seasoned soldiers among you, rest assured it pales in comparison to the headache you’ll induce tangoing with the two terribly balanced, Mode 7-focused stages and their sloppy overhead perspective, frustrating controls and cheap deaths.

It’s not all doom and gloom though, as the remainder of your retro rampage is littered with consistently fresh and engaging ideas, not to mention a host of superpowered tricks tucked under Bill and Lance’s bicep-torn sleeves. Whether piloting monstrous tanks through collapsing cityscapes, riding jetbikes on a crumbling highway to hell or soaring the crimson skies on the backs of misguided missiles, there’s rarely a dull moment that won’t leave you gasping for air. As far as your arsenal is concerned, not only could players switch between two weapons on a whim, but they would only shed their current equip should a stray bullet find its way to your glorified gut. Most intriguing was the ability to lock your super soldier’s mobility in place, allowing for eight-directional, precision-based blasting without the risk of running headfirst into trouble. 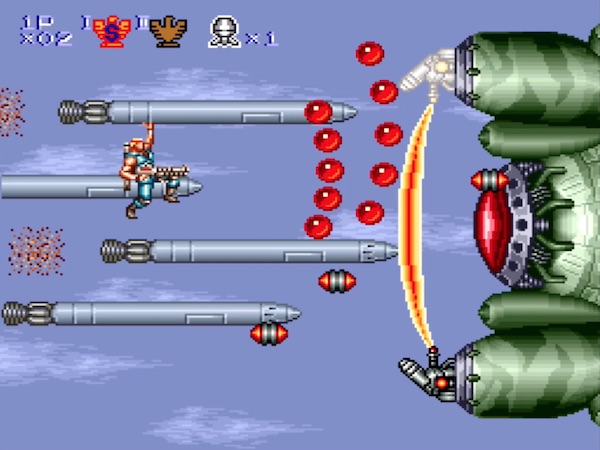 Of course, as any war hero worth their weight in shell casings knows, cooperatively mowing down the scourge of the universe with all manner of machine guns and laser beams is far more gratifying with a buddy by your side. Outside maybe Nintendo and a few developers in the indie scene, local couch co-op is a dying breed thanks to online play provided by the famous information highway. Back then, however, games like Contra III kept me and my friends busy for hours on end as we shoved, shouted and shot our way to victory. One of my fondest childhood memories involves pulling an all nighter at a classmate’s home, guns blazing as we tirelessly fought through a sleepless haze of soda and snacks in an attempt to unlock the game’s true ending. It’s little moments and social interactions like these that give Contra III that extra nudge towards super stardom, and why to this day I continue to boot up my SNES when craving a quick action-packed fix.

Simply put, Contra III is as timeless as the adrenaline-fueled genre it helped establish. It lovingly harkens back to the golden age of the arcade, when games were fast, addictive, reflex-driven experiences designed to keep players pumping quarter after quarter. A time when games were social experiences to be played in openly public spaces and both friends and strangers alike could show off their skills and compete with each other for high scores and bragging rights. In porting that experience to Nintendo’s 16-bit bombshell, Konami ended up with what’s arguably considered the best installment the Contra series has to offer — one I urge you to revisit alongside your most battle-ready bestie when the miniature machine drops later this month.