Today marked the release of the Splatoon 2 Nintendo Switch bundle — and for those of you who have gotten your hands on the system between release and now, congratulations! The console’s been selling consistently and is on track to move ten million units this fiscal year. That said, it may prove to be just as difficult to grab one as it nearly always has going forward. Speaking at Variety’s Entertainment and Technology Summit in Los Angeles earlier this week, Nintendo of America President Reggie Fils-Aimé left it ambiguous as to whether or not the system would be able to meet anticipated holiday demand.

Labeling that the focus going forward, hopefully all bodies can be ready for upcoming titles like Super Mario Odyssey. Speaking of, Reggie went on to state that Nintendo is less a gaming company and more an entertainment company, at least as far as internal consideration goes, and he used Super Mario Run as a key example of this. The mobile app was uncharted territory for Nintendo, and since its release has been a source of both revenue and data for them. As a mobile title, it’s reaching consumers that may not fall into the console market space. 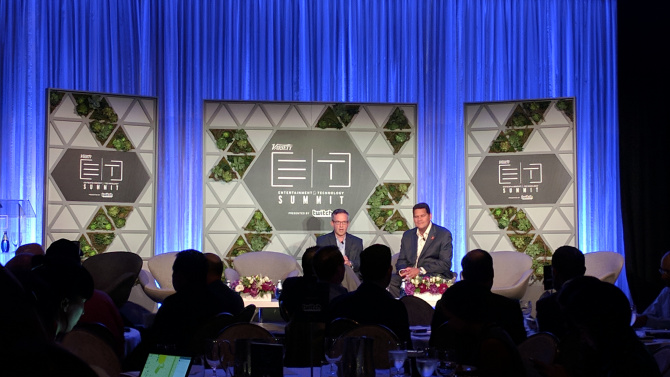 Lastly, Reggie spoke of how Nintendo is now working with Universal for the upcoming theme park partnership. The company may even be considering jumping into the television and film market, though that statement was followed by, unfortunately, reminding the world of the live-action Super Mario Bros. movie. VR was also touched on, though Nintendo is keen to hold off from diving deep into that field in spite of decades of experience and research. AR, on the other hand, is fair game, with Pokémon GO getting name-dropped as a highly successful use of the technology.

You can check out the details of the interview in Variety Entertainment’s article. For anyone after the Switch console today (or any day), good luck.