The World Ends With You is now 10 years old

On July 27th 2007 Square Enix released what many consider to be one of the very best DS games, It’s a Wonderful World, in Japan. Renamed The World Ends With You for western audiences, the game took advantage of the still-fresh DS hardware by having battles play out on the top and bottom screens with different inputs for each.

Of course what most people will remember is the story, which dealt with some surprisingly mature themes. Protagonist Neku Sakuraba in particular might seem like a bit of a walking trope on first sight, or “yet another mopey Square Enix lead”, but his development is paced in such a way that it feels natural.

It’s hard to talk about the game and not discuss its stellar soundtrack either, with its inspired beats only enhancing the game’s sense of style. While the fashion and music might not be as appealing to the Japanese youth of today, it undeniably gives the game a unique identity that still holds up.

Unfortunately the game has fallen to the wayside in recent years. Other than an smart device remake with higher resolution assets, Theatrhythm: Curtain Call DLC tracks and a few cameo appearances in Kingdom Hearts: Dream Drop Distance’s Traverse Town, Neku and Co. haven’t had the chance to shine again. Last year director Tetsuya Nomura acknowledged the game’s popularity, especially overseas, going on to say that making a sequel is “no easy task, but the possibility of a new entry isn’t completely ruled out.”

For this 10 year anniversary we do have at least one acknowledgement from the game’s staff, however. Game artist Gen Kobayashi released this new piece of art to commemorate the occasion: 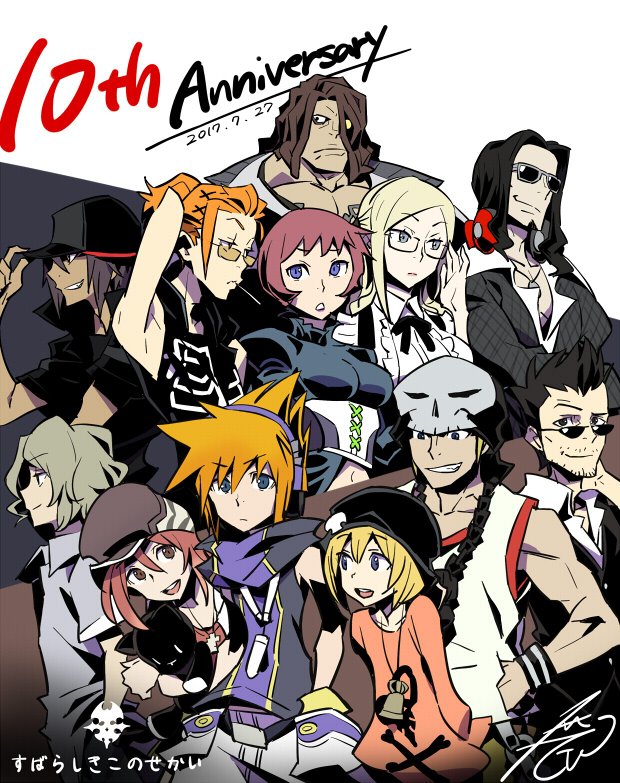 Here’s hoping that one day, once Tetsuya Nomura’s plate is a bit less full, we’ll see a return to Shibuya.