Hello, my name is Jaxson Tapp, and I am an addict. A puzzle game addict. Almost any puzzle game will get me my fix, sure, but only the best puzzle games are going to sink their hooks into me. Thanks to my years of puzzle obsession, I’ve come to learn what the best puzzle games are made of. Most newcomers to the genre assume that more complexity makes for better puzzles, but that assumption is false. For the true genius of a puzzle game to shine through it has to embody one concept: simplicity. With Death Squared, SMG Studio has proven that they understand the concept of accomplishing a lot by using a whole lot less.

SMG Studio first came to my attention on Apple’s App Store with its simple, yet addictive, mobile game, One More Line. After a few months of almost daily play, I came across another entry in the developer’s “One More” series, One More Dash, and to this day I still boot up both games on my phone to kill some time. When the opportunity to do this review fell squarely in my lap, I was ecstatic to give SMG’s first console game a shot. I already knew that SMG Studio understood simplicity, and that it knows how to make an enjoyable game. Sure, that’s an easy formula to follow for a mobile game, but with Death Squared that same spirit of simplicity shines through on an even grander scale.

Death Squared is full of simple puzzles with a simple premise. You act as the AI that controls a set (or sets) of cubes, guiding them through a series of tests developed by a company called OmniCorp. Controlling the cubes is as easy as it gets; you just use the control stick to move them around the stages to solve puzzles. The game’s first offering, Story Mode, has you moving two cubes through 80 puzzles. Story Mode’s biggest draw is co-op gameplay, with one player controlling the red cube, and the other controlling the blue cube. If you’re solving solo, on the other hand, you control both cubes, with each assigned to its own control stick; Left is Red, and Right is Blue. You can also use the ABXY buttons or the D-Pad to trigger tiny, inconsequential actions for each cube, such as an eye blink or turning the light atop the cube on. Most of the actions are next to meaningless, but they add a little bit of character to the cubes, and I found it extremely endearing.

The simplicity of the puzzles is charming, with different buttons, goals and traps all being color coded to match each boxy buddy. The goal of each puzzle is to get all of the cubes to a circle on the floor that matches its respective color, with traps and contraptions littered throughout each puzzle to either aid you or show you the origins of the “death” in Death Squared.

Buttons only activate when touched by a cube of the same color, while transparent colored blocks act as a solid wall or floor to cubes of a different color, but allow those of the same color to pass through with no effort. Finally, colored lasers will tear apart cubes that don’t match their color. As you progress, the mechanics stay simple, but the puzzles manage to get progressively more challenging in a difficulty curve that’s incredibly comfortable and easy to handle. 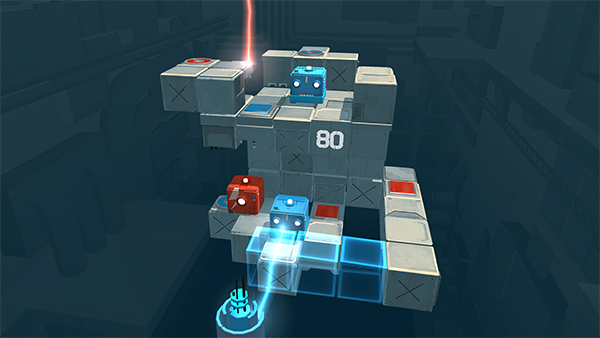 As much as the game is simple, and as perfectly paced as the ramping difficulty is, it’s important to remember that you will die — a lot — and that’s okay. These puzzles are designed for experimentation rather than a quick, easily visible solution. Sometimes parts of the stage are tied to a cube’s movement, and you’ll have to move around and hit buttons to figure out the best way to succeed. Every puzzle completion comes with a sense of accomplishment, and in the end, I found there were only a handful of levels that truly frustrated me, most of which were in the late stages of the game. The accomplishment is amplified when playing through with a co-op partner, and the feeling of working together to solve problems was one of the most enjoyable parts of Death Squared.

The Story Mode in Death Squared is about more than just puzzles, because if you’re guiding cubes through dangerous traps for hours on end, there has to be a reason, right? The narrative follows David through his typical work day at OmniCorp; it’s David’s job to oversee the testing of various AI, which is ultimately a pretty boring job. It’d be a lonely job too, if not for David’s virtual assistant, Iris. David and Iris provide narration for the puzzles, so you aren’t sitting there solving them in complete silence. It’s a welcome component of the game, since the banter between the two is entertaining, extremely well voice acted, and mostly witty, save for one out of place joke involving memes and a certain dead gorilla.

As you get deeper and deeper into OmniCorp’s testing you realize that there is some semblance of a story brewing as David discovers the purpose of the AI testing he’s overseeing. It isn’t groundbreaking, but it’s enjoyable enough, and it leads to some of the most enjoyable video game credits I’ve ever witnessed — so make sure you watch them all the way to the end.

Death Squared’s other offering is Party Mode, doubling the amount of cubes you control from two to four, and increasing the maximum number of players as well. Party Mode can be tackled by two players armed with two control sticks, or four players, each with a controller of their own. There are 40 Party puzzles to complete with your friends — and when it comes to Death Squared, it truly is a case of the more, the merrier. I played through half of the party levels with my three siblings, my wife, and my brother’s girlfriend all present, and it couldn’t have been more fun. 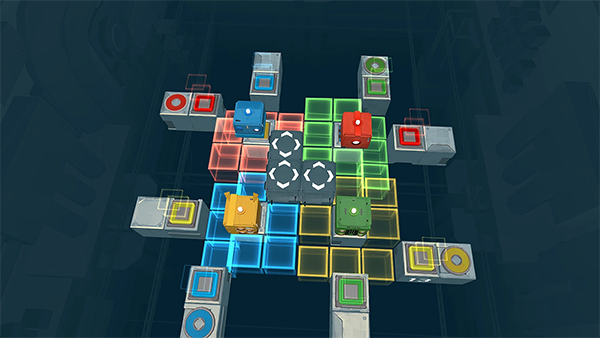 Though only four of us could control a cube, that didn’t stop others in the room from offering up suggestions on how to solve the puzzles. The sense of accomplishment for completing party levels was even greater than completing the story levels, since that feeling of teamwork and enjoyment was felt throughout the whole room. Party mode is where Death Squared really shines, and it’s a shame that the entertaining narration wasn’t present for these 40 levels as well.

There is one last mode that Death Squared has to offer: Vault. The Vault contains 60 levels total: 30 two-cube stages, and 30 four-cube stages, each unlocked once you complete the entirety of the other levels in Story Mode and Party Mode, respectively. The Vault puzzles are all puzzles that were deemed too hard for the main game, and pose an additional challenge for champions of the main offerings of Death Squared. I’ll admit, I haven’t played very many Vault stages, and those that I have tried definitely stumped me at first glance… and second glance, and third glance. They’re not impossible, but SMG Studio definitely stepped up its game when it comes to the Vault.

Outside of these additional 60 puzzles, the game itself doesn’t have a ton of replayability, other than to try your hand at completing each stage without ever dying. There are also ten collectibles hidden throughout the 80 Story stages, and I only know of them because I found two very late in the game. They’re so well hidden that I wouldn’t be surprised if there are some that I missed in the Party Mode as well.

Death Squared was a fantastic experience all the way through, and definitely one of my top indie games of 2017 so far. Party Mode is the definite highlight, making Death Squared the perfect party game for an afternoon with your family or friends, since everyone can get in on the action, even if they aren’t controlling a cube. The mechanics are simple enough that the difficulty can really ramp up without changing much about the game itself. 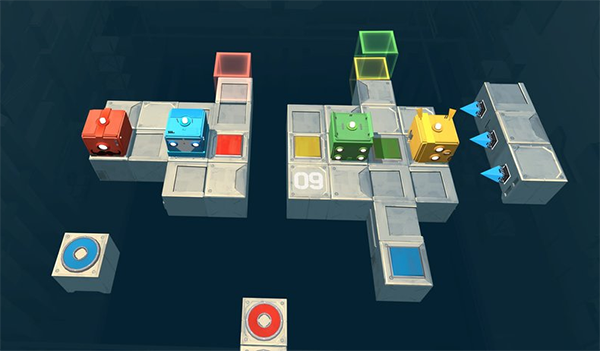 Doing more with less is a hard thing to accomplish, especially in a video game, but SMG Studio has proven that it’s a master of the formula with Death Squared, and I can’t wait to see what it comes up with next. 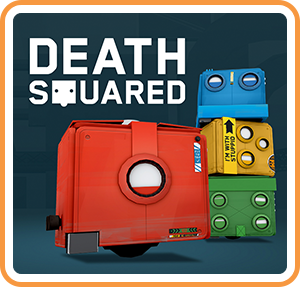