Aside from Super Mario Odyssey, Sonic Forces was the game I most wanted to get my hands on at E3 2017. Like so many, I’d been let down by Sonic Lost World and the entire Sonic Boom franchise. I haven’t seen a quality 3D Sonic title since Generations way back in 2011, so I couldn’t wait to get my hands on what looked like a promising return to form for Modern Sonic.

Sonic Forces is Sonic Team’s latest endeavor, which features a return to the Sonic Generations style of gameplay. This is a welcomed return, since most fans consider Sonic Generations’ gameplay to be some of the best that the series has offered in recent memory. As with Sonic Generations, the game features both Classic and Modern Sonic with their own gameplay styles; 2D Genesis-style gameplay with Classic Sonic, and a mix of 3D and 2D gameplay with Modern Sonic. The newest addition in Sonic Forces is the Custom Character creator, which allows players to create their very own Sonic character. (I can’t wait to finally create everyone’s favorite fan character, Coldsteel the Hedgehog!)

The Classic Sonic stage that was available for play was only a boss battle, so I couldn’t get a full grasp of the movement and physics. Even so, I was surprised to discover that the drop dash mechanic from Sonic Mania was included in Classic Sonic’s gameplay. The demo featured a boss battle against another one of Dr. Eggman’s contraptions, reminiscent of the first boss battle from the original Sonic the Hedgehog game. The Drop Dash mechanic works really well in Classic Sonic’s gameplay, giving it an extra layer of strategy, especially in the case of this boss battle. 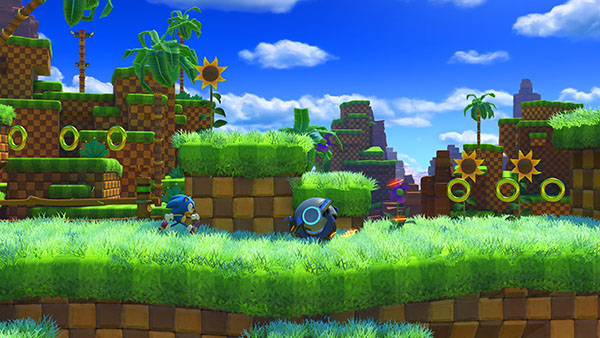 I wish I could have had more time with Classic Sonic, but that’s all that was in the demo.

The Modern Sonic level I played placed Sonic in a city on the brink of total annihilation. Enormous Eggman robots, as seen in the various trailers for Forces, were destroying the city with lasers, and buildings began crumbling and collapsing as Sonic ran through the world. I could definitely notice some differences from Generations thanks to the new version of the Hedgehog Engine, but my favorite hedgehog feels mostly the same as he did in previous “boost-to-win” entries.

Much like Sonic Unleashed and Sonic Generations, Modern Sonic’s gameplay in Sonic Forces mainly revolves around the boost mechanic. In that regard, it’s very similar to what you’ve experienced in Generations. 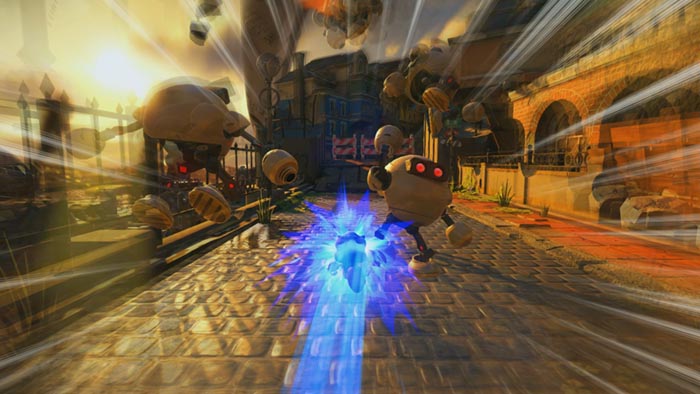 In terms of general control, I felt that the game was lacking a bit. Movement can be a little clunky when the camera switches to a 2D perspective, making precise movement at slower speeds a little frustrating. My biggest complaint about Sonic Forces is that it feels too much like Sonic Generations, which isn’t really a bad thing, but it feels like no improvement to the movement was made since that title.

One welcome change seen in Forces is the use of the Wisps as opposed to rings as the item that fills the boost meter. I found myself having a full boost meter less often, which allowed me to take in my surroundings just a little bit more as I flew through the city. 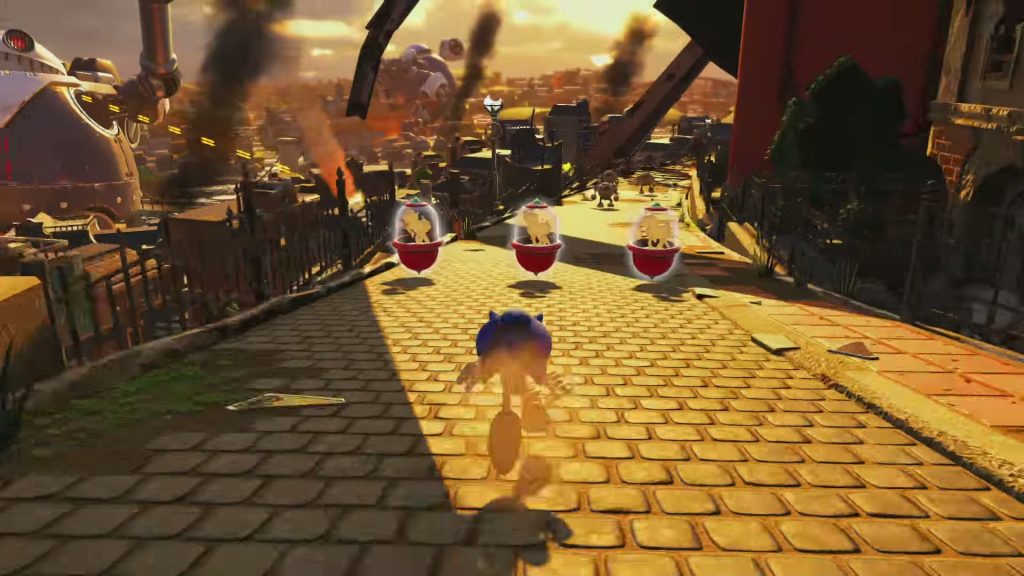 Characters from Sonic’s circle of friends constantly chat in the top right corner of the screen, providing updates on the mission, new objectives and classic Sonic banter. The feature reminded me of the story delivery of Kid Icarus: Uprising, where the action never stopped to deliver story; both are provided to you at the same time.

At this point, playing Modern Sonic levels is just like hopping on a bicycle: no matter how long I’ve been away, I’m always able to pick it right back up almost like I never left. That’s what made the Custom Hero portion of my time with Sonic Forces so strange. The Custom Hero feels like it should control like Modern Sonic, but in reality, the Custom Hero gameplay is slow, methodical, and extremely reliant on the new gadgets the hero wields.

The Custom Hero is equipped with a homing attack, similar to Modern Sonic, but the gadgets were the primary way I took out enemies while playing as the new character. The two gadgets I got to try, a fire-based one and a thunder-based one, felt different enough to the point where I could see myself switching between weapons while playing the game to keep things fresh. The fire weapon is essentially a long-range flamethrower, and running around the level wasting enemies with my flames was definitely the highlight of the Custom Hero demo. The thunder weapon, on the other hand, felt clunky and inconsistent. It’s likely I would understand the mechanics with a little bit more time, but as of now, the fire weapon is the clear favorite in my head. 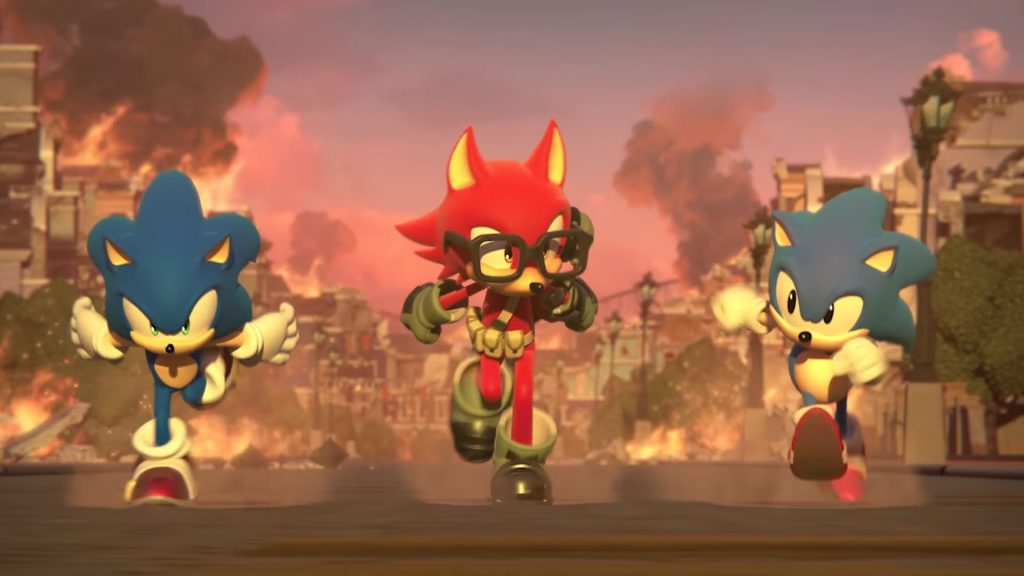 A new grappling hook gimmick was heavily used in the demo level. Similar to the tool Sonic Boom characters would use to cross gaps, grappling around the level felt satisfying, especially when chaining together jumps similar to Sonic’s homing attack.

The Custom Hero didn’t sit quite right with me after the first playthrough, but I’m hopeful that the physics and speed will click when I’m given more time with the character in the future. Right now, I’d compare the Custom Hero level to the Werehog with much better pacing and tighter controls.

Sonic Forces has the potential to be the next great entry in the Sonic franchise. The introduction of the Custom Hero feature has really turned some heads and has peaked my interest. It offers a different way to play as well as the potential to create any kind of ridiculous character you desire — and then have it run right along Sonic himself.

My biggest concern about this game is the control and momentum. Controls can make or break a game, as fans have seen with previous Sonic games. A Sonic game needs to have tight controls, especially when you are playing as modern Sonic. You’re going to be blazing through levels at top speed, so you need the controls to be responsive and accurate. 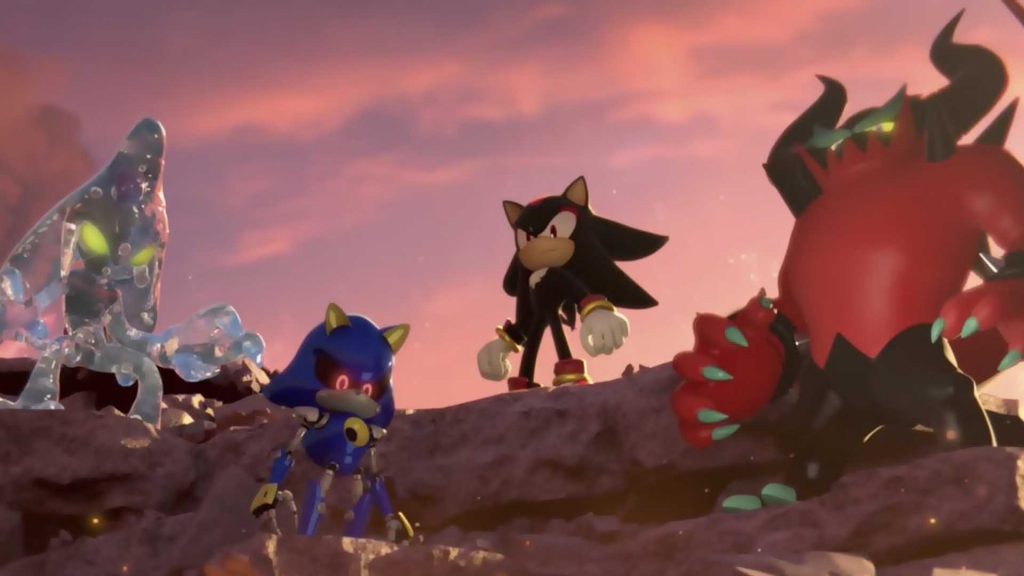 Momentum is more of an issue for Classic Sonic, but I didn’t really get a chance to get a feel for it since a boss stage was the only playable level. From what I could tell, Classic Sonic’s momentum felt very much like it did in Sonic Generations — which is good, however, fans did express their concerns with the momentum not feeling like that of the Genesis titles. After spending time with Forces, I can tell the Sonic team really isn’t aiming for that true Genesis momentum; it’s most likely trying to make the new Classic Sonic its own thing.

But don’t worry: If you’re looking for a true genesis experience, Sonic Mania may be more your speed!