When it isn’t inventing them itself, Nintendo’s always had a knack for refining genres and presenting its own signature spin. We most recently saw this with Splatoon, a game that plenty shrugged off on its reveal, and it now stands as the finest thing to come out of the Wii U. The company’s taken what it’s learned and has applied it to its newest platform — ARMS manages to be an entertaining slugfest on the Switch that should only get better with time. This is a game most suited for online warriors and anyone able to get a party started in their living room. Those looking for a Splatoon-like story mode or the amount of play variety and collectibles to be found in Smash Bros. are out of luck. Anyone after a solid one-on-one fighter that nails the fundamentals of the genre and supplies some great characters, however, need look no further.

By boiling the elements of a fight down to a fundamental rock-paper-scissors type setup, ARMS has the ability to become understandable by anyone. Attacks are stopped by blocks, blocks can be bypassed by throwing, and throw attempts can be stopped with normal attacks. All of this is dependent on timing and reflexes, though, and it’s with experience and practice that you’ll come to understand the flow of an ARMS match. All of the characters have unique traits to complement their standard array of attacks, with some like Ninjara needing to block to make the most of them. That makes them prime targets for throws, compared to the duo of Byte & Barq who lose their teamwork angle if a well aimed punch strikes the canine comrade. 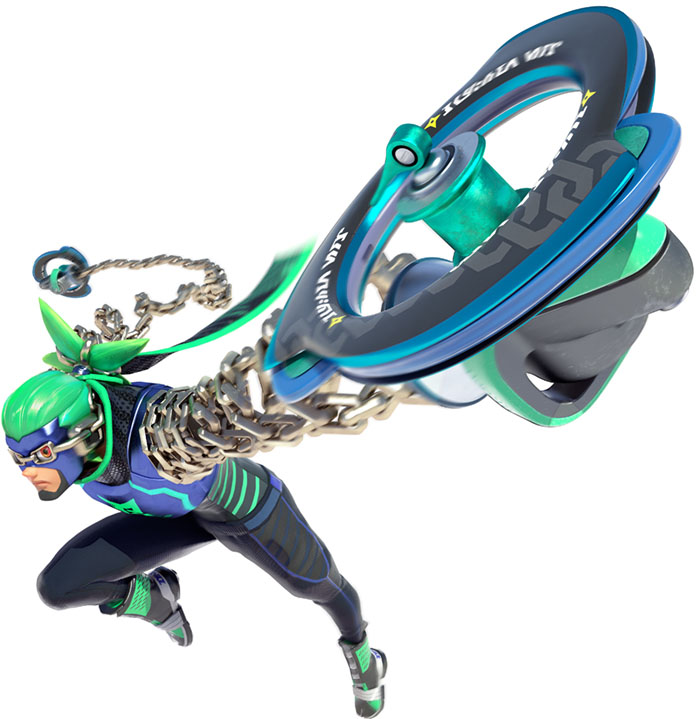 It’s these character traits that elevate ARMS from mere concept to something that’ll attract longtime fans. When they were first revealed, I had nearly written off the initial reveals, with only the more interesting-looking Mechanica to keep me invested. Now that I’ve seen them in action, there’s hardly a character I dislike. Getting a feel for the cast has been the most fun I’ve had with the game, with Ribbon Girl’s mobility and loadout surprising me the most. That does lead into one of the game’s shortcomings, however. While over time loadouts can be changed as ARMS are unlocked, the game is inherently slow. This is nothing new with fighting games and it adds weight to your actions but it can lead to unwarranted frustrations at times, especially for characters without any increased mobility, like Master Mummy. Sluggish moments can then follow where punches are flying but there’s no impact, taking me out of the fight and making me wish there was just a bit more to a fight.

The game’s motion controls are front and center, and for the most part, the thumbs up grip setup works. It feels good to throw a punch and have it connect, but there’s a definite curve to understanding how to make exactly what you want to happen, happen. Often times, an attempted throw would instead act as two almost simultaneous punches and I couldn’t properly maneuver. This never took away the inherent satisfaction, and even now I occasionally give them a shot.

If you’ve got a second set of Joy-Cons, all the better, as throwing punches with your friends is a really fun time. Playing with the Joy-Con itself was comfortable when needed, but I felt most at home and able with the grip configuration of a Pro Controller. It allowed for a little more precision with punches at the expense of reflexive timing, but movement with a stick definitely felt better than tilting the Joy-Con. 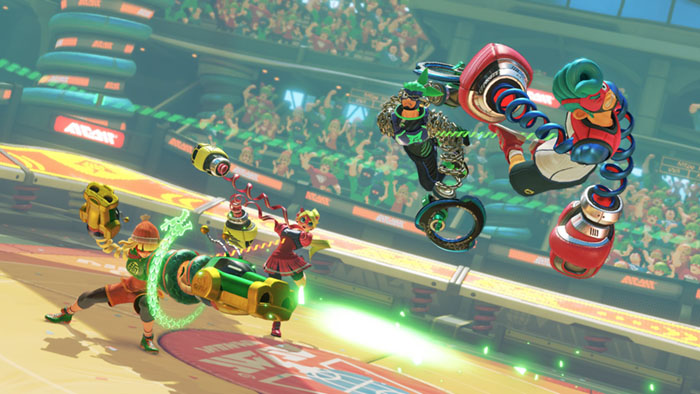 At its core, ARMS’ fighting system is a methodical one. Flailing can only get you so far and it takes understanding the charged properties of ARMS: timing your punches and knowing proper reactions in a given situation. There’s immense satisfaction with being able to time your punches so that one is heading to your opponent and the other is already cutting off their predicted escape route, though be warned that every punch you throw also leaves you open to counterattacks. Keeping a cool head and trying to outsmart your opponent, as well as outfight them, makes ARMS into a game you can’t sleep on.

Stretching outside the ring

Outside of the core fighting, both online and local, there’s also the ARMS Grand Prix to play through. While it attempts to add in some flavor delivered by the likable commentator Biff (sadly without his voice acting from Directs), it’s a bare affair that represents a standard arcade mode typical of these games. The main draw with it is how it allows you to acquire a higher amount of the game’s currency across the series of fights. When cashed in, these allow you to grab more ARMS for the game’s cast via a target punching minigame. I advise you to save up to at least 100 of these, as the higher you pay, the more time you get. These are claimed as random drops, meaning you may get something you weren’t looking for on a character you seldom play, but this kind of gacha style reward system is nothing new. I’d have appreciated a way to pay a premium for exactly what I want, though, as I’d prefer investing to make sure my favorites have all their options available. 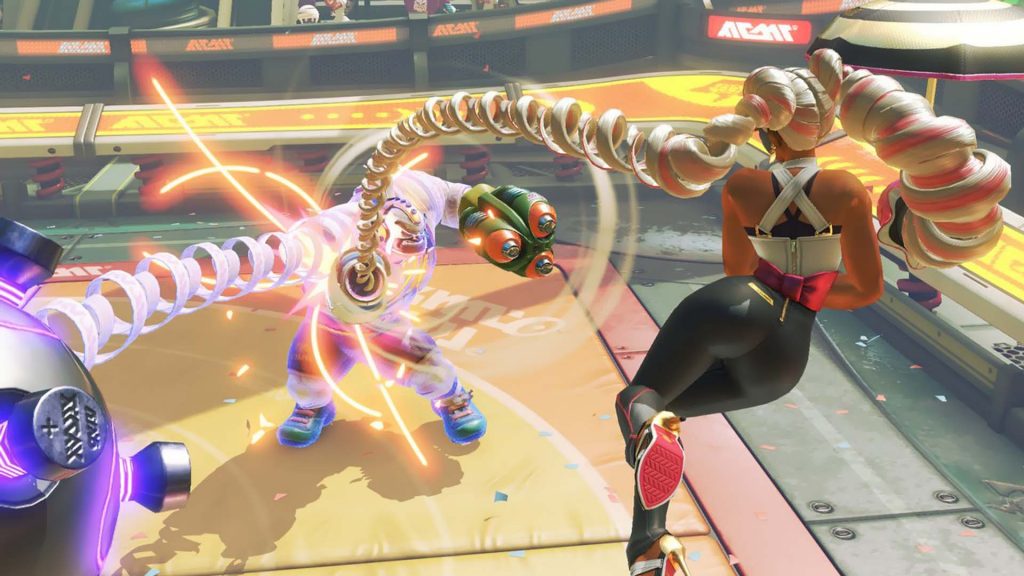 The volleyball, basketball and competitive target punching modes are simply not interesting on their own. As occasional diversions while in a Party Lobby (as they were during the Testpunches), or as in between rounds during the Grand Prix, they feel similar to Splatoon’s GamePad minigames — but without the retro charm or simplicity. Ranked matches are locked behind the need to clear the Grand Prix at a certain, mid-level difficulty so anyone hoping to make a name for themselves there needs to do a little punching offline first.

That said, even without Ranked in the picture, ARMS seems designed to be played online, and the lobby system is actually represented in a way that’s visually appealing. If you were won over by the Testpunch and can see yourself playing that for a long time coming, then ARMS won’t disappoint. 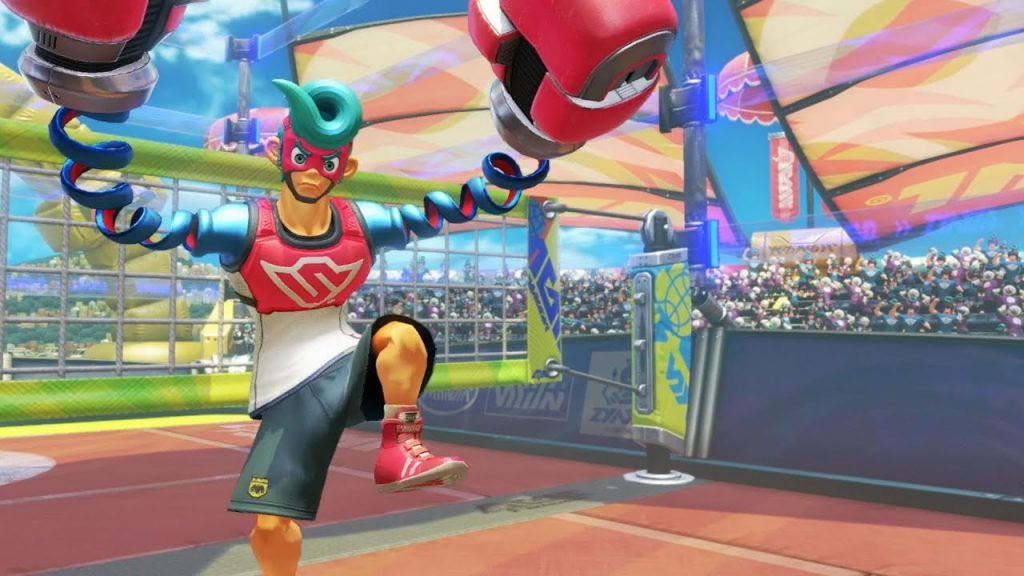 With all this considered, ARMS might come off as a tough sell on day one. It has personality in spades and the gameplay is solid and entertaining; it’s just that there isn’t much more to it beyond those core elements. With more content coming soon, those on the fence may be better off waiting a bit, but if you’ve come to like these characters and want to get a head start on taking on the world, ARMS isn’t going to let you down. Nintendo’s new IP and foray into fighting games manages to craft its own identity and earns its place within the existing lineup. Being able to make your punches connect will take some practice, but keeping one step ahead during a fight and seeing it pay off is intensely satisfying. I can say with certainty that I’ll be playing this one with my friends for a long time coming.

Leave a Comment
Buy at Amazon Buy at GameStop
7.5