In preparation for 2017 Splatoon 2 World Inkling Invitational today’s tweets on Splatoon’s Japanese Twitter account are giving us an idea of what weapons will be shown off. It looks like a fiery coated, one-hit-KO beast is definitely back!

Oh you beautiful, flame painted, “googly-eye” stickered powerhouse. Glad to have you back! From the images posted, it appears as though Blaster looks the same from the first game, just with some slight graphical upgrades… but that’s probably where the similarities end. The Blaster’s special weapon may not be good ol’ faithful, the Killer Wail; it may be a brand new special weapon or an upgrade of Killer Wail. All we have to go on for now is the name “スーパーチャクチ” (Super Chakchi) — who knows how this will turn the tide of Turf Wars!

As for the Blaster’s sub-weapon…

It certainly looks like a Disruptor, but this beaker has some new tricks. Dubbed “ポイズンミスト” (Poison Mist) this sub-weapon unleashes a fog that’ll stop enemies in their tracks. Your opponent’s speed will drop in addition to their ink tank supply! You’ll definitely want to avoid the area when this is activated!

The Squid Research Lab has been posting the English translations of some previous Splatoon 2 news we’ve covered between the US Tumblr and Nintendo UK’s official site. Now we have some canon names to apply to these characters and tech that are in Hero Mode!

“We’ve gotten some Octarian intel that wasn’t available to us in our most recent research footage. This odd creature is called the Tentakook. Tentakooks have an annoying tendency to dodge attacks while they litter the ground with bombs. Try hounding them into a dead end before finishing them off.” 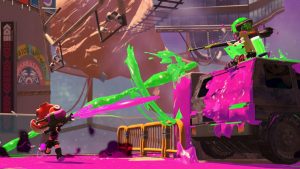 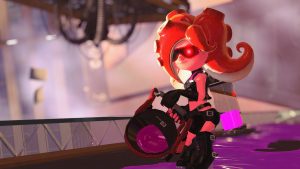 “This bad mamma jamma is none other than the Octoling, an Octarian soldier that can take on a humanoid form and compete with Inklings in speed and maneuverability. And yes, I know they’re super rad looking, but do NOT let that fool you. They’ll come after Agent 4 with whatever weapon they can find, from shooters to rollers to sloshers. Their face visors have also gotten an upgrade, and as much as I hate to admit it, look pretty flippin’ fresh.” 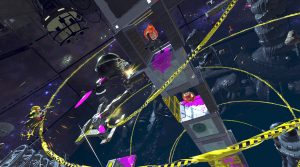 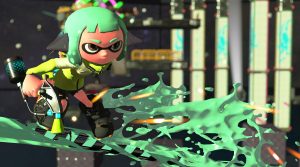 “Throughout Hero Mode, you’ll come across all sorts of bizarre contraptions and this ride rail is just one of them! Hop aboard and you’ll automatically zip along at breakneck speed! Jump while riding to fling yourself high into the air. Show off your freshest tricks as you blaze through stages!”

“Meanwhile, this contraption right here is an Inkfurler. When you come across them, they’ll be rolled up tightly, but with a generous splash of ink they unfurl nicely. You can move with ease across an unfurled one, and the force of an unrolling Inkfurler can knock out enemies, too. Move quickly though! Once a certain amount of time has passed – or if hit with enemy ink – it will roll back up.”

“And lastly, let’s take a look at some Rolonium. When hit, it’ll roll off with a whole lot of oomph and squish anything in its path – including Octarians! Shoot it at an angle from underneath to launch it into the air. Some Octarians will attack using the Rolonium, but if you time it right, you can whack it right back at them!”

And that’s our Splatoon 2 news roundup for the day! Check back frequently — we’ll be sharing more roundups as the game’s release draws closer!