The Squid Research Lab has updated the info on this baddie for North American players. Here’s description from the posting:

“This tough customer is Octo Samurai. He brandishes a gigantic roller, using it to dash the hopes of all those who dare approach. He’s got no time or patience for anyone who fakes the funk, and word has it that he is worshipped as a big bad boss by the Octarian rank-and-file troops. He enjoys working on his motorcycle in his spare time. On closer examination, it should be noted that he actually looks more like a sumo wrestler than a samurai, which is a little weird.”

The official Japanese Splatoon 2 Twitter account has just shared several brand new images of one of Splatoon 2’s biggest enemies, Takotsubo Zamurai, or “Octopus Pot Samurai” in English (a rough translation for the time being). This larger than life Octarian looks to have a love for both biker gangs and the samurai, as his giant Splat Roller appears to contain both a motorcycle motor and a Samurai sword. 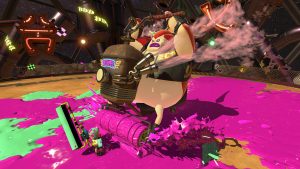 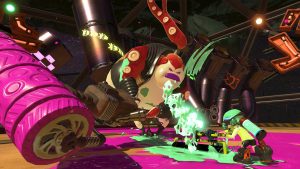 What could make this boss even better, you ask? How about his preferred mode of transportation: a tiny unicycle. At the moment, we don’t have the official English information on this new enemy, but stay tuned to Nintendo Wire for more details as they come in!