One of my favorite things to come out of Mighty No. 9’s interesting journey as a game was the 8-bit tie-in title, Mighty Gunvolt. A melding of Mighty No. 9, Azure Striker Gunvolt and Gal*Gun’s worlds and characters, it was a fun little deviation of a crossover. Now, the folks over at Inti Creates are trying to make lightning strike twice with a sequel bursting onto both the Nintendo Switch and 3DS. Mighty Gunvolt Burst brings the game worlds of Mighty No.9 and Azure Striker Gunvolt back together, with the full lineup of mighty numbers set to challenge the player through the retro inspired platformer.

Beck and GV both return as playable characters, forced into circumstances where they have to take on a virtual reality melding of their worlds. They won’t have access to their abilities, but instead new and altered ones designed with this game in mind. By playing through stages and fighting bosses you’ll earn plenty of rewards, a number of which can be used to customize your gameplay style and shots. Visually, the game is going for a sort of in between of 8 and 16-bit aesthetics, calling to mind the action game roots of both these characters.

At the heart of the gameplay will be the Burst system — a component so important that it made its way into the game’s title. By finishing off enemies up close you’ll trigger a Burst, making the enemy explode in a more stunning way and providing an increased score. Chaining these Bursts together will allow you to gather the highest score and keep the flow going all the way up to the bosses, who will also be Burst-able. It sounds interesting and will encourage a sort of flow through the game that I’m excited to see in motion.

As you go through the game you’ll unlock modules that allow you to tweak your loadout and enhance or alter your shots in various ways. This’ll include homing shots, the ability to shoot through walls and plenty more. You’ll need Cost Points to equip all of these though, gained by completing stages and rare enemy drops. You can use the Cost Points in other ways as well, like for diagonal firing and a charge shot. You can even equip customizations that give you penalties but increase your score and other rewards, giving those after a bigger challenge a greater reward. 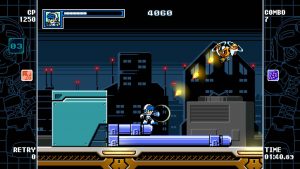 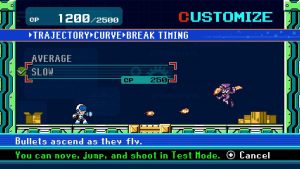 A collectible called Pixel Stickers will also be in the game, findable in the stages themselves or as enemy drops. They aren’t mentioned to have much functionality, but they can be used as icons for your custom shots. (These seem as though they may be more of a collectible for collection’s sake.) Some will be hidden in stages, requiring the use of a Dowsing module that will utilize the Switch’s HD rumble to clue you into their locations. How this’ll be handled on 3DS is unknown at this time, but I can see myself tempted to hunt all of these down.

Mighty Gunvolt Burst will be coming to the Nintendo Switch on June 15th, with the 3DS version following on July 12th. Both will sell for $9.99 as downloads via the eShop. Look forward to more details about these in the near future, as we’re less than a month away from the Switch version bursting onto the scene.

In the meantime, while you wait, get more hyped by watching the official trailer below!