Rhythm Violence. That’s the phrase that Drool uses to describe its latest rhythm game, Thumper. As simple as that phrase is, it encompasses the heart and soul of the game in a way that a longer sentence has a hard time doing. Drool was started by two ex-employees of Harmonix, the company known for creating Guitar Hero, Rock Band and Amplitude, but Thumper is far from just another conventional rhythm game; it’s extremely physical in a way that no entry in the genre has been before.

Thumper is a simple rhythm game on the surface; you pilot your beetle with only two inputs at your disposal, a control stick and the A (or R) button. However, as you progress those inputs are stretched to their limits with each level you complete introducing new mechanics and ways for your beetle to interact with the track. It’s easy enough at the start, by pressing the A button as your beetle passes over a square of light on the track, you rack up points. You learn how to turn, by holding down A while tilting the control stick with the turn. New levels will teach you to take flight, switch lanes, and avoid lasers by perfectly hitting each beat.

At times, you can barely tell you’re playing a rhythm game, and to be honest, that’s okay. Sure, there’s a beat you can stick to, and the soundtrack is phenomenal, but the mechanics work like any other game. Once you learn them, you can play without paying attention to the rhythm, though it still helps, especially in the later levels.

There are nine levels overall, and two different modes to play them in, Play and Play+. In Play, each time you hit an obstacle or miss a turn, you take damage, losing your beetle’s outer shell. Take damage with no shell, and you’re sent back to the checkpoint to try again. There are no lives, and no punishment for dying, as far as I can tell. You can try over and over again, and later in the game, this becomes a great help as you start to memorize patterns and execute them perfectly. Play+ unlocks after beating level three and this time you pilot a faster, golden beetle. The rules for taking damage are the same, but if you die, it’s game over, and you have to retry the entire level.

Thumper drew me in with its dramatic and unconventional art-style; it doesn’t look like a rhythm game at first, with its haunting aesthetic, sprawling backgrounds and spiky, tentacled bosses. It’s fast-paced and bright, with lights flashing and pulsating as you hit beats and smash your way around turns. Occasionally, this can become overwhelming, especially after long play sessions, but each level has slow breaks that allow you to sit back and enjoy the scenery without requiring any input — just make sure you’re ready to start up again once the craziness starts back up.

The actual gameplay also doesn’t really feel like a traditional rhythm game either. There’s an almost harsh physicality with each of your moves. Holding the A button lets you hunker down and power through barriers, shattering them instead of having them shatter you. Turning isn’t about avoiding the walls that pop up along the track; you tilt your beetle to slam into them, grinding along them like rails. It’s quick, jarring, and most importantly, it’s addictively fun. My favorite move involves jumping off one beat by holding up and A to fly to the next, only to slam down and send a massive shockwave down the track. Thumper manages to live up to the label of Rhythm Violence by taking normal rhythm game pieces and morphing them into something that is overwhelmingly action-oriented –- and it works so well.

Thumper hooks you by slowly introducing you to each mechanic, and then peppering them throughout levels alongside tricks you already know. It isn’t a case of teaching you something new and then hammering it into your head with a level or series of levels focused solely on the new tool in your belt. Instead, the game teaches you something new up front, and then you only see it once or twice per section of level for a few checkpoints. By the final stages of each level you feel as if you’ve been working with its associated new ability all along, especially since they’re tied to the inputs you’re already using, just in different ways.

The levels are long, too. Just the first contains 15 sections, and takes roughly ten minutes to complete. As you progress, the levels add more sections, and the sections themselves become longer and longer. The length was nice for the first three, since I got to spend a lot of time with the game while still feeling like I had so much more to experience. However, around level four this did start to wear on me, and was the first time I really became frustrated with the difficulty spike and how long it was taking to break through. The first time I walked away because of frustration was a little over halfway through level five –- there was a sequence I couldn’t quite nail, no matter how many times I threw my shiny silver beetle at it, and my frustration wasn’t helping things. Luckily, the game lets you leave mid-level, and return to whichever checkpoint you’ve currently reached later on. This is a nice feature for those who want to take a break to cool off, try a couple levels in Play+, or go back and play earlier levels with more experience, in order to raise their high scores.

Thumper is a short game on paper — there are only nine levels — and then those same nine levels are playable in Play+, so where does the replayability factor into this game? Drool’s answer is the Leaderboards. Each time you cruise through a checkpoint, the game gives you a score breakdown, and a letter ranking, based on your performance in that section. These all add up at the end of the level, giving you your point total. These totals end up on the Leaderboards, separated into Play and Play+ sections, and can be sorted by Global Rank, Your Rank and Friends. Players chasing S Rank scores to reach the top of the Leaderboards will have to be at the top of their game for each run, as Thumper can be unforgiving when it comes to racking up those points.

The world of Thumper is enthralling; it draws you in with gorgeous visuals and an eerily noisy soundtrack, and then hooks you by feeding you little by little until you suddenly realize that you’re on your way to becoming a pro. I loved Thumper because, at the end of the day, nothing feels quite as cool as nailing a set of corners and beats in quick succession at high speeds, perfectly in sync with the music. Its formula is unorthodox, but it works. Piloting a beetle violently careening down an otherworldly track towards a giant, spiked skull has never been so enjoyable. 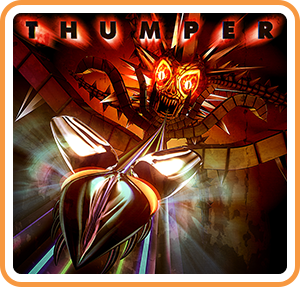