Splatoon 2 and its amiibo are still a few months away, but the Squid Research Lab has pulled back the curtain to provide a look at some of its figure related features. Highlighting just how social Inklings are (they thrive on a team sport, after all), you’ll be able to store a set of gear to an amiibo and have them join you around the game’s hub for some quick photo ops. That’s not the only fun though, as it’ll also allow you to use your prefered gear loadout no matter which system you’re playing on, not to mention serving as an easy way to select it if you’ve been trying some new threads and want to hop back into that old comfort.

We also get to see what are, presumably, the gear unlocks for each of the new amiibo. Playing off of the original game’s sets, this time along the Girl, Boy, and Squid will presumably each unlock a new type of school uniform, ninja gear (to compliment the last game’s samurai armor), and a new form of mechanized power armor. It’s a cool nod to the originals if that turns out to be the case, though you’ll have to really get to know your amiibo friend in order to be gifted these ones. 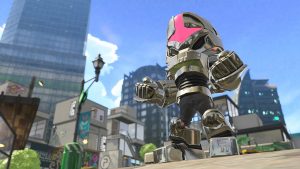 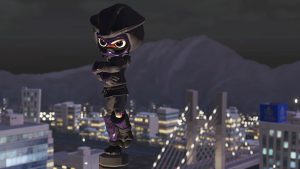 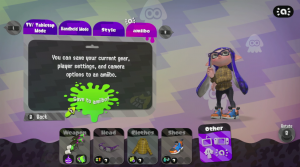 Speaking of the first game, all of the previous Splatoon amiibo are confirmed as compatible as well, though what they unlock specifically hasn’t been shown. It will be gear related by the sound of things though, including both of the Squid Sisters. Look forward to learning more about them closer to release, and make sure to stay fresh in the meantime with all of our continued Splatoon 2 coverage.