Review: The Binding of Isaac: Afterbirth+

The twisted brainchild of Super Meat Boy’s Edmund McMillen, The Binding of Isaac: Afterbirth+ gained notoriety back in 2011 for its unique combination of accessible roguelike ideas, crude humor and deeply masochistic mechanics. Only expected to sell a few hundred copies during its initial release, Isaac became an overnight sensation, paving the way for a roguelike resurgence for innovative games like FTL: Faster Than Light, Risk of Rain and Don’t Starve to quickly follow suit.

Six years later, the unholy abomination of twin-stick shooters makes its Nintendo Switch debut, providing one of the zaniest, most fulfilling gaming experiences the hybrid system has to offer. Not only is Isaac worth its weight in fecal matter, but it serves a prime example for all roguelikes to aspire to: a homage to the challenge of retro gaming’s past without compromising contemporary conventions.

Much like its biblical source of inspiration, The Binding of Isaac’s story is equal parts harrowing and open to interpretation. Having watched one too many televised Christian broadcasts, the titular character’s deeply religious mother hears the voice of God, who in all his benevolent glory demands the sacrifice of her beloved son to prove her unwavering faith. Fearing for his life, Isaac narrowly escapes through a trap door in his bedroom, where unrelenting horrors and all manner of mythical monstrosities lurk in wait.

Love it or hate it, Isaac’s art style takes great inspiration from McMillen’s humble beginnings as a flash game developer. As oxymoronic as it sounds, the creepy/cute imagery is off-puttingly endearing in the best of ways: full of cuddly creatures you just want to hug, but shouldn’t because they’ll relentlessly tear your face off. This crude charm is very fitting of the game’s satirical spin on its undeniably dark subject matter, lightening the mood while simultaneously shining a spotlight on Isaac’s incredibly fun gameplay. While I could probably write an entire book in defense of all the scatological humor and gratuitous obscenities plaguing Isaac’s sick sad little world, suffice it to say that there’s some thought provoking social commentary about faith under its seemingly blasphemous exterior: no small feat for a game chronicling a naked adolescent’s journey through the seven depths of Satan’s cellar.

While I personally adore the somber soundtrack of Danny Baranowsky’s original composition, Ridiculon does a fantastic job coupling Isaac’s melancholic undertones with a burst of energetic flair. It might not be as melodic or memorable, but the unsettling ambiance of Isaac’s plight is felt throughout, with boss themes appropriately picking up pace to complement their chaotically twitchy tendencies.

WHEN LIFE GIVES YOU LEMONS, REROLL!

Not for the faint of heart, Binding’s a brutally challenging twin stick shooter with a hefty dose of RPG and roguelike mechanics coursing through its veritable veins. You’ll spend most your time traversing randomized Zelda-inspired dungeons while fighting demonic deviants and pungent poop monsters with the tears of a traumatized, naked child. Mastering these weaponized waterworks is key should you wish to escape his murderous mother’s grasp, with Isaac’s momentum influencing both projectile range and curvature. It’s a very simple system that adds some much appreciated depth to the standard four-directional shot path, especially in earlier stages where you need to rely more on your wits than the hundreds of potential power-ups at your disposal.

Therein lies the heart of Isaac’s strength: excellent randomization design that provides hours of seemingly endless content. Each and every playthrough proves an addictive game of chance that never feels predictable, thanks in large part to an unrivaled variety of creative power-ups. Beyond playfully deforming our weeping wailer in horrible ways, these copious items give Isaac a snowball’s chance in overcoming Afterbirth’s many grueling atrocities — ranging from basic stat buffs and tear mutations to literal meat shields and fiendish allies. Abilities stack as well, meaning one run you might end up a laser beam barfing, diarrhetic demon only to become a cycloptic, sickle-teared tyrant in the next. With countless combinations, the chances of discovering an ability you haven’t seen before is overwhelmingly in your favor, scratching that infernal itch to tackle “just one more round.”

Unfortunately, the oftentimes subtle effects for many of Binding’s items can be hard to determine without a little help. While I personally found the act of experimentation and discovery to be half the fun, a handful of item descriptions are far too cryptic for trial and error alone to decipher. The Golden Horseshoe or Safety Cap, trinkets that increase spawn rates in very specific situations, prove perfect examples of effects near impossible to discern without the guidance of an external wiki. Other than that tiny hiccup, not knowing whether a particular item will help or harm you is the kind of risk/reward system that keeps players on their toes and each run an emotional roller coaster.

Of course, nothing will keep you more alert than a massive horde of sinful abominations in dire need of a good exorcism. Boasting more than 180 individual enemy types, memorizing each creature’s distinctive attack pattern is sure to push even the most classically trained video game veteran to their limits. From sporadic spiders and creepy nightcrawlers to shambling corpses and enraged embryos, there’s no shortage of grotesque degenerates in need of a dirt nap, many of which are greatly inspired by classic Zelda adversaries — albeit in much more horrific fashion. While fate plays a major part in which of Satan’s spawns you’ll encounter within any given run, you’d do well to learn the nuances each hideous eyesore has to offer.

Yet for all of lady luck’s influences, Afterbirth+ is a remarkably balanced affair driven by quick reflexes and infallible skill. Death rarely feels punishing, and is more often than not the result of human error rather than poor power planning. Even my worst runs, riddled with stat reducing pills and underpowered tear enhancements, could be overcome with a dash of fancy footwork and modicum of patience. Where some games practically expect you to believe in a higher power to persevere, Isaac ironically favors determination and competence; and it’s all the better for it.

YOU ARE PLAYING IT WRONG, GIVE ME THE CONTROLLER

Having experienced Isaac’s precarious predicament on every platform imaginable, Afterbirth+ on the Switch is, without a doubt, the definitive way to play, containing all newly and previously released expansions in one conveniently priced package. Thanks to a steady 60fps when either docked or in handheld mode, the Switch’s patented duality proves perfect for both short bursts of play on the go and longer marathon sessions at home. Flipped Joy-Cons prove a dream for drop-in couch co-op, too: reminiscent of arcade games from a bygone era where a buddy could simply jump in on a whim at the sacrifice of a fraction of Player One’s health.

Few games can successfully get away with a boss character who incessantly pees itself as its eyeballs eject from the sockets and ricochets around the room, but therein lies Isaac’s bizarre charm. While it may not resonate with everyone, those who can appreciate McMillen’s (disturbingly) whimsical sense of humor will find an amazingly addictive roguelike that’ll hook you well through the afterlife, no matter how many times you repeatedly trudge through its demon-infested underworld.

In the end, The Binding of Isaac: Afterbirth+ proves much more than a darkly comedic take on the biblical parable, masterfully balancing challenge with the unexpected to create one of the most surreal and replayable games you’ll ever gouge your eyes upon. 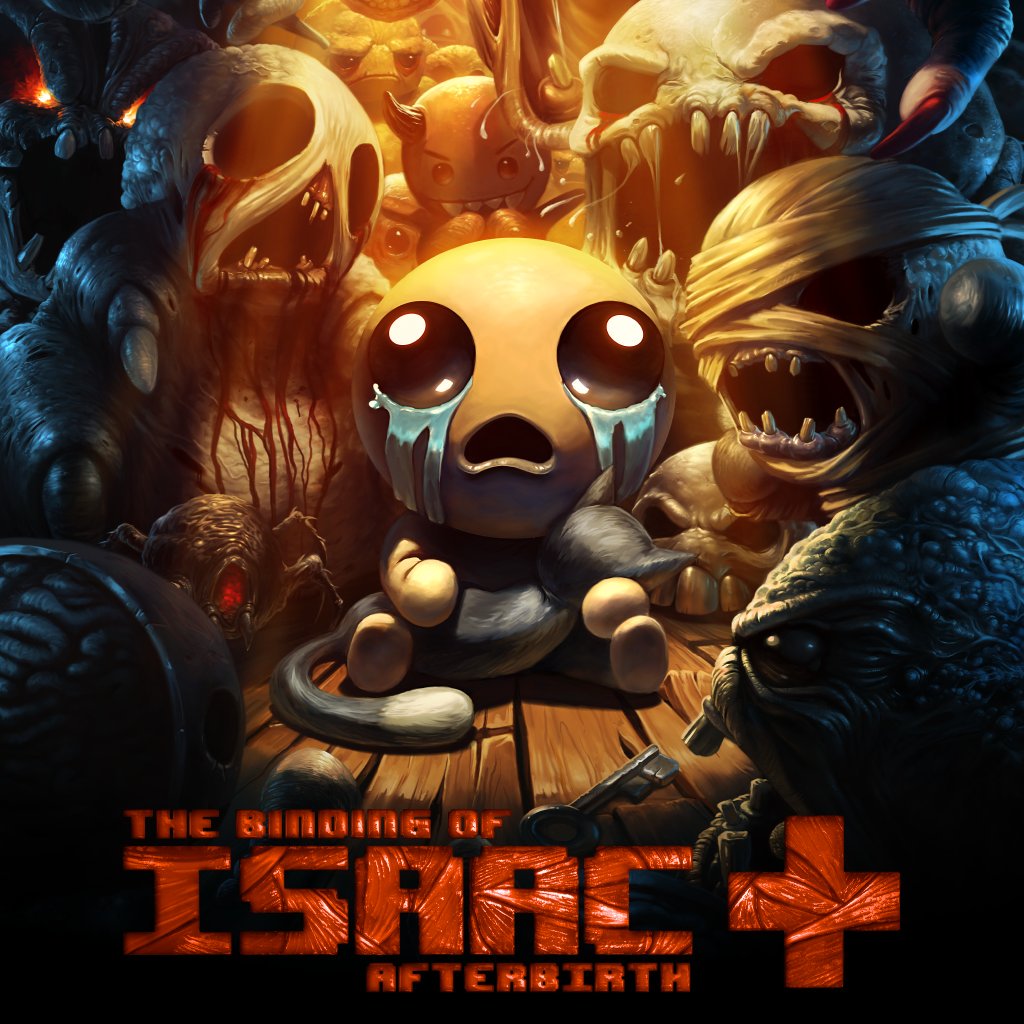