In Seaside, Oregon, there’s a huge arcade on the main street in town. It has racing games, shooters and fighters. Modern games fill the majority of the square footage. There is, however, a small corner that contains classic arcade cabinets with games such as Ms. Pac-Man, Street Fighter and, most importantly, Galaga. My dad always told me Galaga was his favorite game growing up. He loved the little spaceship and the endless waves of enemies that he had to take out. Playing Vertex Pop’s new title Graceful Explosion Machine, I was greeted with all of the elements I learned to love from Galaga, plus some new modern twists that make this 2D side-scrolling shooter a memorable experience.

The first two levels of Graceful Explosion Machine act as tutorials. The orange spaceship you’ll pilot starts off with just a simple blaster, but within a few minutes you acquire the full range of abilities that you’ll use to plow through the game’s four planets — each containing about ten levels, with every level having three segments. Once you clear the screen of all enemies, the next segment will begin. And trust me when I say this: You’ll need the small break in between segments to realize you’re not breathing. Luckily, if you die in the middle of a segment you’ll get to begin at the start of it, while only being required to restart the entire course at the very beginning when you run out of lives.

The normal blaster works on an overheat system, so it’s extremely important to use it wisely. The three special weapons — the laser, energy sword and missiles — work on a gem system, meaning you’ll have to kill more enemies to get gems to recharge the special weapon energy. The special weapons are crucial for success in each level, and each one provides an interesting option to escape any tricky situation.

The energy sword swings around the ship in a circle, effectively wasting any alien enemies in the immediate area. The missiles lock onto enemies as they’re launched, giving the pilot an easy way to take out enemies that move in an erratic fashion. The laser itself is great for sniping enemies with a lot of health that can’t easily be defeated with the other weapons.

The special weapons provide an exciting variety of options to use during every space battle. Find yourself being swarmed by enemies? Try and clear ‘em out close range with the sword, blast ‘em to the high heavens by firing missiles every which way, or trust your piloting skills to maneuver out of there and flank the swarm from behind. There’s no wrong answer, only right ones, and it’s this ability to choose your style of play that really makes Graceful Explosion Machine stand out from other titles in the genre.

The risk/reward system that results from the limited use of special weapons really forces solid strategy and forethought. While it’s always easier to blast enemies with the special weapons, it’s smarter to save the special meter for when you’re surrounded by enemies. In the later levels I found myself constantly out of resources: when my blaster wasn’t overheating, I was out of special weapon energy, forcing myself to momentarily retreat to regroup. The “back against the wall” feeling I got in later levels was a welcome experience that upped the intensity of the game for sure.

While the difficulty of Graceful Explosion Machine doesn’t pick up until the latter half of the game, there’s plenty of challenge to be found in the first planets. Every time an enemy is killed, the combo multiplier raises by .1. An extremely helpful timer that shows when the combo will reset back to x1 is located in the top right corner of the screen. In order to keep the combo going, an enemy has to be killed before that timer runs out. If the spaceship is damaged, the combo will also reset to x1 — and the ship will only be able to take three hits before total destruction.

A grading system is present for your performance in each level, with the top mark being S+. To achieve the S+, perfection is required. Taking no hits and never letting your combo expire throughout all three segments is necessary to get the top rank.

The combo system is one of the best I’ve ever seen in a video game of this kind. It forces constant action and weapon management. If you’re ever in a pinch where none of your weapons are accessible, you’ll have to kiss your combo goodbye and start from scratch. Always knowing when the combo will expire is an extremely helpful feature that consistently told me exactly how long I had to kill another enemy to keep my streak alive. Without the combo feature, Graceful Explosion Machine would lose a lot of the intensity it contains, since there would be no need to take out enemies in a timely manner.

Note: While it wasn’t available during our review time, you’ll eventually be able to post scores to online leaderboards to show everyone in the world how good of a pilot you are.

Throughout my time with Graceful Explosion Machine I went from an adequate pilot to a smooth movin’ space connoisseur. This is thanks to the brilliant difficulty progression featured throughout the game’s four planets. I got better without even realizing it, and I was able to go back to earlier levels and dominate the enemies I found there. This aspect is a great testament to Graceful Explosion Machine’s replay value, as playing through the game once is simply not enough. Through the tougher levels I learned tactics and strategies for almost any situation, and I was able to go back to prior levels and earn that elusive S+. Flying through the looped levels of the four planets feels extremely satisfying now that I have the smooth moves to pull off in any given situation.

The only real negative aspect of Graceful Explosion Machine comes from the aesthetic. You’ll spend a long time on each planet, where the background art looks the same throughout each level. The lack of variety in color palette and design makes each planet feel stale after awhile.

Besides the main campaign levels, there are two additional modes to blast your way through. Each planet ends with a warp level, a stage that is longer and more taxing than most. The bonus mode takes that warp level and extends it, providing a marathon challenge to play. I’ve never been a fan of excruciatingly long levels, so this comes off as one of the weaker points in the game for me.

The second mode challenges you to play through an entire planet in one sitting, keeping track of your score and combo along the way. This mode seems perfect for online streaming, as it features the most gameplay of any mode available. It raises the stakes even higher, if that’s even possible. Trying to play through an entire planet with a limited number of lives proves to be great fun, but there’s still enough downtime in between stages and levels to give you a chance to breathe.

Graceful Explosion Machine is a worthwhile indie experience on a platform that’s still just getting started in terms of games. The addicting combo system, funky tunes and exciting variety of weapons make this space shooter stand out from the rest. I had an incredible time blasting my way through the main campaign, and I’m looking forward to going back to improve my rankings. The game does a beautiful job providing players with the chance to perfect the craft of piloting a starship, an experience I think any Switch owner who’s a shmup at heart will love. 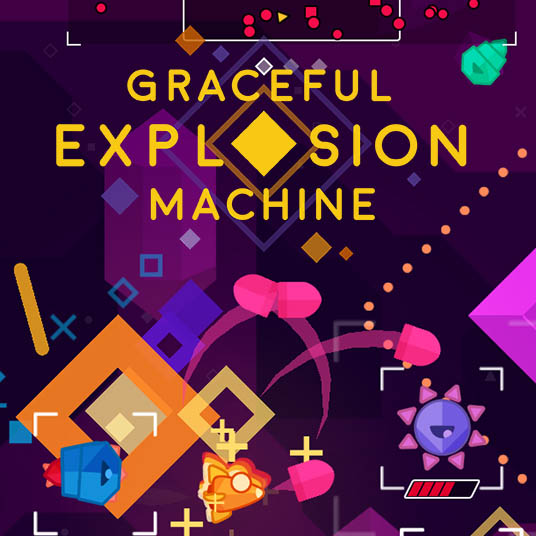