Growing up, I loved racing games — from Mario Kart, to F-Zero, to Need for Speed, they were a huge part of my childhood. And racing games, much like fighting games, were an exciting way to find out who among my friends could stay on top the longest. Not to mention, there’s a certain thrill that comes along with going really fast — and racing games allow you to go fast in a virtual world without having to worry about the risks involved driving at crazy-intense speeds. As I got older, I moved away from almost all racing games; other games, and life, just demanded too much attention. About all the racing I ever did in my teen years took place in Mario Kart, but it wasn’t the same. I had the urge to get on some new tracks for swifter, more stimulating experiences, and I knew I needed a game that focused on speed to do it.

Shin’en’s Fast RMX was a launch day title available for the Switch, and one of only two titles on day one that offered online multiplayer. I’ve spent quite a bit of time with the game over the last few weeks trying to scratch that need for speed itch, and for the most part, it’s been a successful endeavor.

Get up and go

Fast RMX begins in a simple manner: there’s no tutorial, and no training. The game starts up and right off the bat there are three modes offered: Championship, Multiplayer and Hero Mode. Championship is the main game mode and is separated into three difficulties: Subsonic, Supersonic and Hypersonic. Each difficulty houses the same ten cups with three tracks each, giving the game 30 tracks total. As you compete in each cup, placing in the top three will unlock a new cup, along with one of the game’s 15 vehicles.

Subsonic is the only difficulty available at first, but as you progress through the game, the higher difficulties will be made available to you. The higher the difficulty, the higher the speed at which you race gets. Moving from Subsonic to Supersonic at first felt almost like a night and day difference in speed, and made for some incredibly fun races. At Hypersonic, the speed is faster than Supersonic, but not in a way that makes it impossible to navigate vehicles.

The high speeds alone make for incredibly intense races, but it’s the mechanics of racing in Fast RMX that really put the game over the edge for me. Your vehicle can switch freely between two different “phases,” blue and orange. These phases are important to remember, as the boost and jump pads on each track are colored to match one of the two phases. Match your phase to the color of the track and receive a boost in speed or get lifted into the air; mismatch the colors and your vehicle will slow down or miss a jump altogether, causing you to crash. You can also boost manually, filling up your boost gauge by collecting orbs scattered around each track.

Your boost is controlled by pressing the R button; press it once for a quick burst of speed, or hold it to burn through your boost gauge to gain a big lead on your rivals. Boosting into your opponents as you speed past them spins them out of control, which becomes a vital tactic at the higher difficulties.

All of these intricacies add up to make the most exhilarating racing game I’ve played in years, rivaling 200cc races in Mario Kart 8, albeit without the zany characters or cartoonish tracks. The mechanics of boosting and switching phases seemed complicated at first, but they’re simple enough, making it easy to catch on quickly, and I never once felt my skills weren’t good enough to advance further. The higher speeds really made each race feel as though the stakes were high, and the excitement I felt racing at the Supersonic level for the first time was something that I haven’t felt from a racing game, or any game really, in a very long time.

Each track in Fast RMX is beautifully designed, whether it’s an abandoned city, a sprawling space station or a stormy rainforest. Even though some tracks share similar locales, no two of them feel the same, keeping the game from giving off a stale vibe as you marathon through each cup.

Weather effects, like rain and misty winds, also keep certain tracks interesting, even if the effects themselves look subpar. Almost all of them seem to be a simple filter placed over the screen, clashing with the otherwise gorgeous visuals the game provides.

Most tracks have a number of obstacles as well, both immobile and mobile, ready to take advantage of your speed, and appear at a moment’s notice to wreck your car and shatter your dreams of being a racing star. This isn’t a problem for most tracks, since once you wreck it’s easy to get yourself back in the race, and you’ll remember to avoid that spot in the future. Almost every track features breaks and gaps that must be jumped over as well, and if you miss a landing, you’ll end up careening off into the abyss.

As well designed as most tracks are, and with how easy it is to get back into the heat of the race after crashing, some courses still feel too unforgiving, especially at the highest speeds. Even after driving over the same track multiple times, there are sections of it that still trip me up in the very same spots, no matter how differently I handle them. One course in particular, named Iceland, seems almost impossible to complete while using the Hypersonic difficulty, due to the entire cylindrical shape of the course being littered with obstacles — it’s simply not possible to drive over it in a straight line. Instead, the track forces you around and around and around, almost as if the physics of the game don’t quite know how to handle a track with no border.

This problem only lies with a couple courses, but the issue is impactful in a way that ruined my experience with entire cup. With how smoothly most tracks are set up, I find it to be a shame that some of them feel like they weren’t designed with high speeds in mind at all.

Fast RMX is one of two Switch games with online multiplayer currently available, and honestly, my experience with it has left something to be desired. Even though the game supports multiplayer with up to eight players online, I was stuck with only one other person in the lobby to race 1v1 every time I hopped online. Shin’en will soon be releasing a patch that will add the ability to race your friends online, but for now it’s just a waiting game until you get put into a lobby with another random player.

The local split screen multiplayer, however, was a blast when I played with my wife. It’s standard racing game fare: pick your track, pick your car and go. You can also adjust the settings, like number of laps per race, number of races per cup, and whether or not to include CPU racers.

Note: The title also supports local Switch-to-Switch multiplayer, but I was unable to test this function for this review.

If you’re not first, you’re last

As it turned out, Hero Mode, which is the last mode made available to you on the main menu, ended up being the definitive feature within the entire game. It required me to give my all and pushed me to my limits the entire time, and that thrill of racing my heart out made the the title stand out.

In this mode, the catch is that you absolutely must finish first, or else all your racing will have been for nothing. Each course is mirrored, and you race on one track at a time. Your boost gauge also doubles as a shield meter this time around — so if you run out of shields and collide with another racer or the sides of the track, you’re done for, and it’s counted as a loss.

Hero Mode is what made the game stand out, even if it’s given me some of my most frustrating gaming moments in recent memory. It’s hard (brutal at times) and very straight to the point, but a challenge like this is what puts Fast RMX over-the-top from a good racing game to a great racing game.

Fast RMX also takes advantage of the Switch’s HD Rumble, present in both the Joy-Cons and the Switch Pro Controller. It might not be as incredible as feeling marbles rolling around inside your controller (1-2-Switch, I’m lookin’ at you), but it definitely makes the game more immersive. You can feel your vehicle shaking as you drive through a windy section of track while trying not to get blown off the edge, giving you that extra bit of real life sensation as you drive. As you bump into other cars or walls, the rumble starts on the side where the contact happened, and moves through the controller to the other side, depending on how hard the hit was. It’s a simple detail, but it really adds to the overall experience.

Fast RMX has definitely scratched my racing game itch, and it’s a title I’ll keep going back to every time I feel the need for speed. It’s not without flaws, but for a casual racing fan those small shortcomings are easy to look past. Any fan of F-Zero should feel right at home racing on these tracks, and any Switch owner who can’t wait until the late April release of Mario Kart 8 Deluxe should definitely check out Fast RMX to satisfy their racing needs. 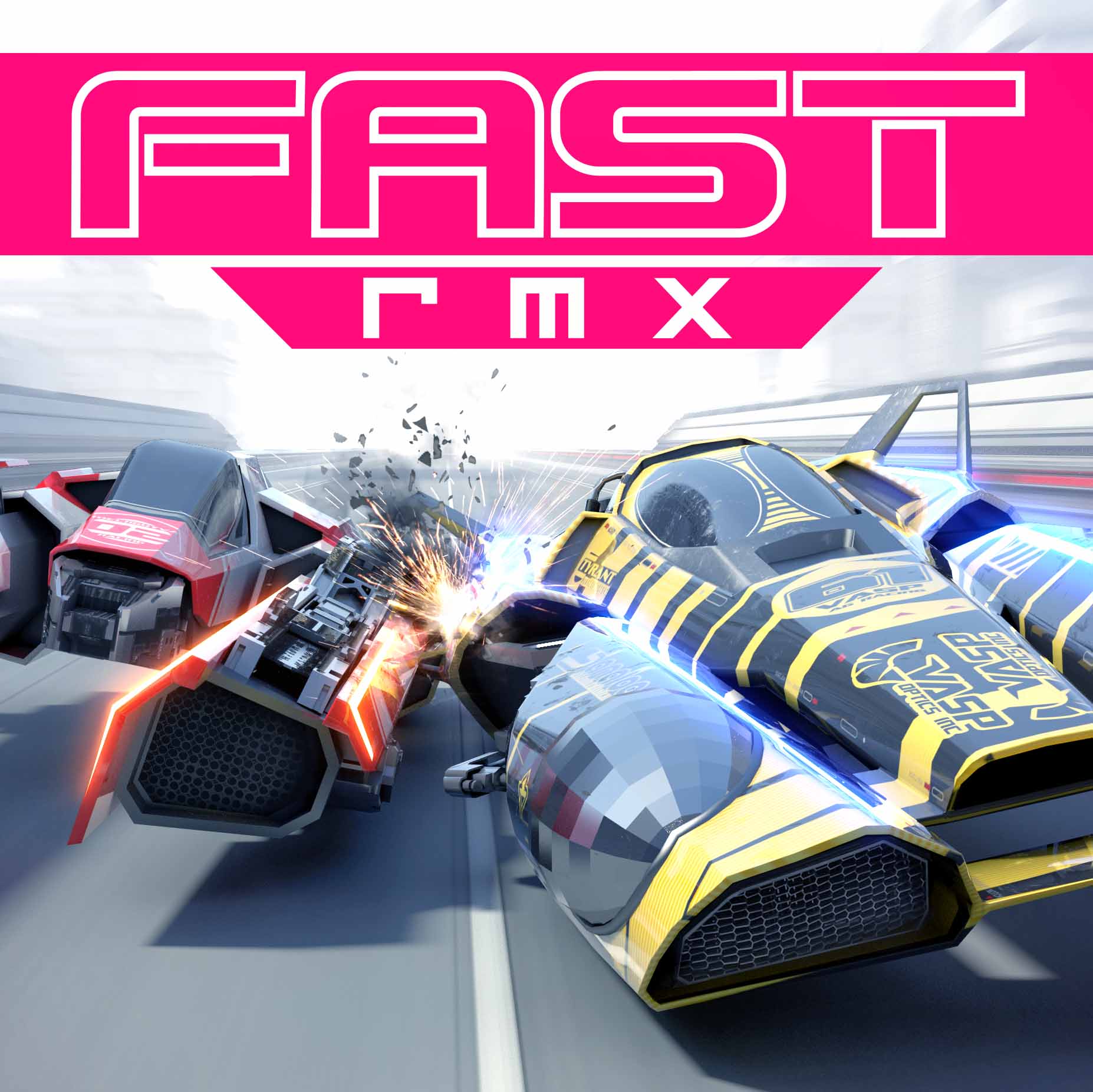