Review: Snipperclips – Cut it out, together!

I was one of the many who sneered upon hearing the name “Snipperclips” for the first time. It was a name that evoked the sort of Wii-era shovelware that anybody would turn their nose up at — a cheap and unpolished game aimed at kids to make a quick buck. However, as soon as I saw footage on the Treehouse livestream, I was captivated. The game seemed a fun co-op puzzle title — one that would help flesh out a sparse launch line-up.

Now that I’ve got my hands on it, I can say with mild satisfaction that Snipperclips lives up to that image… for the most part. While it certainly has some glaring flaws, the concept presented is executed well enough that it makes a good addition to your library — with some conditions.

The idea of Snipperclips is simple: You (along with a friend, preferably) control two little characters, who I presume are the titular clips that snip, and cut shapes into each of them to solve puzzles presented to you. The goal given can be something simple like forming a shape with both characters or getting a basketball in a hoop, or something more complex, like guiding paper frogs to a pond or making sure microbes don’t touch goop. That one makes much more sense in context, I assure you.

Right off the bat, the game charms the player with its paper aesthetic. Much of the game appears to take place in what appears to be the margins of a notebook, with scribblings and some odd objects such as buttons or pencils about. The Snipperclips themselves wear a variety of expressions depending on what’s happening, injecting a great amount of personality and flavor into your actions. Very reminiscent of games like Kirby’s Epic Yarn, the themes also switch (heh) into more cyber, science inspired aesthetics later on.

In turn, the music seems to be composed of one, maybe two tracks overall, but they’re soft and inoffensive enough to not be grating. Sound effects, however, are very on-point, making a game already oozing with zaniness flourish even more. From the pops of balloons to the squelching of goo, everything sounds as it should. Overall, the presentation of the game is great, even if a little more variety in the soundtrack would be nice.

Snipperclips uses simplicity as its strength: Basic mechanics are never expanded beyond cutting and reforming your characters. Thus, when trying to figure out a puzzle solution, you have to rely on your ingenuity and wit with the tools you’re given. The puzzles, as mentioned, take on a variety of shapes and forms, giving an extremely varied experience overall.

It must be said now and forever that Snipperclips is infinitely better with a buddy. Offering a great couch co-op experience that allows you to brainstorm ideas, coordinate movements and execute strategies with relative ease. You’ll have a good time working together to solve brainteasers without feeling the need to strangle your partner in the process… most of the time. In turn, playing solo is much more of a dredge, forcing you to constantly switch back and forth in a battle of tedium that simply isn’t as fun or fast.

Unfortunately, that tedium does carry over to the multiplayer at times, which is where Snipperclips’s biggest flaw reveals itself: it’s uneven. Some puzzles provide some good enigmas that require a small bit of cleverness and cooperation to sort out. Others, unfortunately, are monotonous slogs that drag on for some time — not because figuring out the solution is hard, but because getting everything in the exact right position takes a long time.

This isn’t helped by the fact that the game’s physics are rather finicky, leading to a couple excruciating moments where the smallest slip-up means you have to start over. On stages like those where you have to cut shapes out of the background, a single mistake can set you back five, maybe ten minutes with no chance for redo. Other stages are perfectly enjoyable and forgiving. It’s so uneven that it’s hard to peg the overall difficulty. Unfortunately, the harder levels are hard in an unsatisfying way, making them not terribly engrossing experiences, even with a friend.

Another knock against the game is length. While there are numerous side modes (as we’ll see in a moment), there are only 45 levels in the main game, separated into a mere 3 worlds. Not an awful number on paper (HEH!), but it only amounts to a few hours at best, and a significant portion of that time, as mentioned, is spent at a grind rather than figuring out the solution. In the end, the positives still outweigh the negatives, but the unevenness of the experience really bogs it down in the end.

Fortunately, there is some other content that helps alleviate the lack of main game playtime. There’s a 2-4 player “Party” mode, which is not a board game ripoff of a much more successful franchise, but, rather, new levels for expanded groups of people — 21 in total. While a great time with more friends, playing with only two leads creates a feeling analogous to playing the main game alone: a bit of a drag. It isn’t a detrimental addition by any means, and it has some great designs, but you’ll need at least one pal to experience it.

Of surprisingly more enjoyment is the game’s true competitive mode: “Blitz.” Consisting of three minigames — basketball, air hockey and “dojo” (a fighting mode where you attempt to cut your opponent to death) — the jankiness of some of the game’s physics become its benefits here, as these are a hilariously good time. Air hockey, in particular, seems to mimic the wanton chaos of the real sport to an astonishing degree, aided by the odd shape of the Snipperclips and the ability to murder one’s opponent in cold blood. It ended up being one of the most memorable and fun parts of the game in the end.

Overall, Snipperclips ended up being mostly worth the $20. While short and certainly not balanced in terms of difficulty, its charm and simplicity make it a good time to be had with a friend — and not much at all alone. If you’ve got a spouse, kid, roommate or other individual you trust and care for deeply, then it’s worth a look at, and a definite buy if you’re really into puzzle games. However, if you’re a member of the Lonely Hearts Club, then you won’t be having much fun. 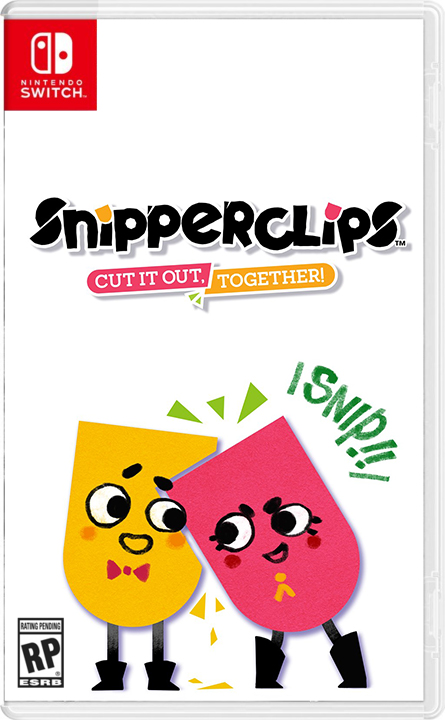