Plenty of new Switch items are starting to find their way online in anticipation of the console’s coming release, with the pre-release reveals giving an idea of what kind of focus Nintendo has for their new console.

First up are a pair of “Premium Console Cases” themed to Breath of the Wild. These look like they’ll serve to house the Switch console itself, though exactly how can’t be fully gleaned from the images alone. As a welcome bonus they’ll come with a cleaning as well. Likewise there will be “Collector’s Edition Screen Protection and Skins” set that will come with decals for the Switch console and its dock, a screen protector, and two “rubber thumb caps” to enhance grip on the analog sticks. Items like these have been released in the past by other companies but these could be the first official Nintendo stick grips, opening the door for use in games like Splatoon and Smash.

Similar to the above console cases, there will also be a stylish Mario version featuring plenty of Mushroom Kingdom power ups as well. This one’s definitely more my style and meshes well with the aesthetic many of my favorite 3DS cover plates have.

Moving from cosmetic to utility, there will be a “Game Traveler Protection Pack” that’ll come with a cleaning cloth, screen protector, game card case, and a Micro SD card case. This confirms support for that format and shows that they could be important enough to the Switch’s infrastructure so as to require a dedicated accessory. There will also be a “Deluxe Travel Case” meant to hold the console, dock, and power supply by default. It’ll surely be able to hold a few other accessories, as it’s also shown with what looks like some game card cases. No word on if they’re included but they’d certainly help if so. 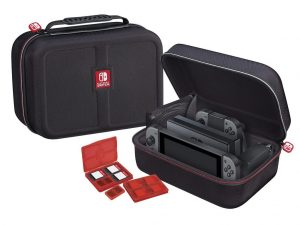 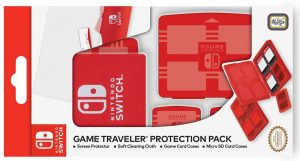 Finally we have a dedicated charging station for Joy-Cons. It’ll be able to house what looks like two sets of Joy-Con pairs, meaning four pieces total. The dock itself can be plugged into the Switch Dock via USB, meaning other power supplies in that format should work as well if need be.

Expect more details on these and more Switch accessories in the near future!