Hey everybody, welcome back to Collectors Corner! Every other week I’ll be bringing you a special article on the Nintendo consoles, merchandise and collectibles that I love. Ever since I was a kid, Nintendo has held a special place in my heart, and has inspired me to collect and do research on the seemingly infinite amount of collectibles out there, and I’m excited to share that passion with you all.

This week, we’re taking a look at what has come to be my favorite Nintendo console of all time: the original 3DS. Initially launched in 2011 at a very controversially high price with few games to its name, the 3DS started to pick up steam after a price drop later in the year. Looking at the system now, it’s hard to believe that it ever struggled to connect with players. After the 3DS found its footing, we were treated to some really gorgeous special editions, some of which I would like to take a look at today.

The Legend of Zelda

The first special edition 3DS to be released, this gorgeous system was bundled with The Legend of Zelda: Ocarina of Time 3D. Featuring striking gold artwork against the black shell of the system, this is one of the classiest special editions I have seen to this day. This is partly because the design of the 3DS; the glossy shell lends itself nicely to standout graphics, which isn’t something we’ve seen on later 3DS models. The simple gold artwork features ocarinas and harps in the corners of the system, bordering a Hylian Crest in the middle of the console– but there is one more small touch that really makes this console stand out. Gold is used as an accent color all throughout the device: the lettering on the ABXY and all other buttons, the 3D slider, and the lines on the D-pad are all gold, and not overwhelmingly so either. It’s a small touch that really pushes this system over the edge in terms of creativity, and small touches like that are something we desperately need to see make a return with special edition handhelds. Would you like to own this stunning piece of technology? You can find them on eBay starting at just $215. 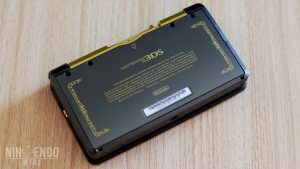 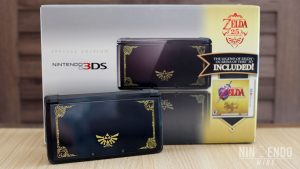 Launched in February of 2013, this is yet another gorgeous 3DS with artwork that isn’t too bold or flashy, this cobalt blue system was released alongside Fire Emblem Awakening (with a copy of the game pre-installed in the system). Featuring art from the series with that trademark blue finish, it’s a great match for the 3DS’ first venture into the Fire Emblem series. A fantastic game deserves a fantastic system, and this Fire Emblem 3DS complements the game perfectly. This particular handheld actually proves a little harder to find these days, more so than the Zelda console mentioned above. My guess is that the scarcity is probably due to Fire Emblem not being as popular or widespread as The Legend of Zelda. Despite this, the systems are still able to be found on eBay, albeit for a slightly higher price than the Zelda system, starting around $275.

How often have you asked yourself if you wanted a handheld console with a snakeskin finish? If the answer was never, prepare to thank me after this entry, because you’ll be asking yourself that question every single day from now on. Released in an extremely convoluted manner that only Hideo Kojima could get away with, this console was available in a special package with Metal Gear Solid: Snake Eater 3D. To get one, MGS fans had to be in Konami’s fan club, and then register for a lottery in the Japanese Konami Style Store before a deadline– and if they won the raffle, they were offered the chance to buy the system for the equivalent of $300. This is perhaps my favorite original 3DS system because, rather than donning artwork on the shell, the snakeskin is embossed, giving the system a unique texture that not many handhelds receive during the design process. Despite the insane rarity at launch, there are currently listings for this edition on eBay starting at only $250.

Hey everyone, Lauren here! Jaxson was kind enough to ask me to pop in this week’s Collector’s Corner to talk about a very special limited edition system, one that I personally own: the Princess Peach Chotto 3DS. (It may be worth mentioning that it’s only referred to as “Chotto” in Japan. The European release simply calls it “Princess Peach.”) My Princess Peach collection has been in the works now for roughly 28 years and has accumulated well over 200 items. To this day, my Princess Peach 3DS remains to be my very favorite item in my entire collection. Why, you ask? Take a look at this elegant, yet subtle, design. Peach’s recognizable pink dress and blue jewel adorn the front shell, with a solid shade of pink gracing the back shell and its interior. What most people don’t realize is that the shell is covered with a thin layer of very faint sparkles, causing the system to glimmer in the right light. It’s a detail I don’t often see with systems. 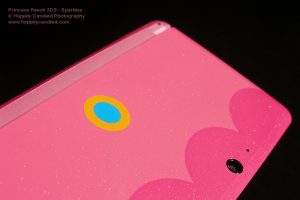 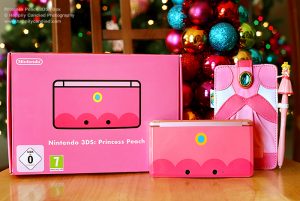 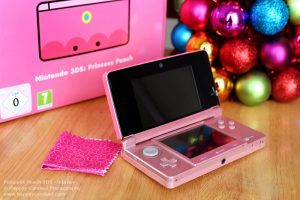 Only available as a Club Nintendo exclusive contest prize in Japan and Europe during a small period of time in 2012, this royally gorgeous system was one of three editions offered to members who registered at least two of 13 titles on their Club Nintendo accounts. (The other two designs were modeled after Mario’s famous red and blue overalls outfit and Toad’s adorably spotted mushroom hat.) Upon entering the raffle-like contest, each member could state which design among the three was their favorite. This didn’t necessarily guarantee the winner their favorite system, but they at least had somewhat of a chance to acquire their desired console. And unlike other raffles held for limited systems in Japan, no payment was required when winning one of the 3DS handhelds; Nintendo graciously shipped winners their prizes, free of charge. How amazing is that?

Limited to just 1,000 pieces per design, all three Club Nintendo 3DS handhelds became rare very quickly. Originally selling for around $300 a piece on eBay in 2012, the systems became harder to come by over time, causing the occasional listings to hit the $600-700 range– on average. At the moment, only one Princess Peach 3DS seems to be available, falling just under the $450 mark (which is a pretty decent price).

There it is, folks! The original 3DS in all its glory with some of the most beautiful special editions Nintendo has released in recent years. I’ll say it again: the original 3DS lent itself really, really well to special editions, due to it’s solid looking design and glossy finish on the shell. The New 3DS is fantastic, cover plates and all, but I do long for special edition consoles matching the quality of the original 3DS to make a comeback. Thanks for checking out Collectors Corner this week, make sure you stay tuned– we’ll be back in two weeks!