Shining light on the 30th anniversary of Kid Icarus

1986 was a good year for Nintendo. Super Mario Bros. had been in players’ minds and hands for a year already and it was the year that The Legend of Zelda and Metroid released to much acclaim, and they began their own rise to popularity.

Another hero would be trying to take flight right at the end of that year as well, though his renown would take quite a bit longer to achieve. As it’s the 30th anniversary of this myth’s beginning, I think it’s about time we give Pit his due and look back at a game often overlooked when compared to its compatriots. Find yourself a hot spring and keep an eye out for eggplants; this is Nintendo Wire’s tribute to Kid Icarus!

Taking its key characters and aesthetic from Greek mythology, Kid Icarus stars the young angel Pit as he ventures forth from the Underworld to rescue the goddess of light, Palutena, from the forces lead by Medusa. Pit himself doesn’t exactly fit in with the Greek theming, being modeled after most depictions of angels or cupids with his wings and bow becoming trademarks. It wasn’t until many years later that Pit would becoming a more recognizable face among the Nintendo pantheon, but even in his debut his sprite is well defined for the time. 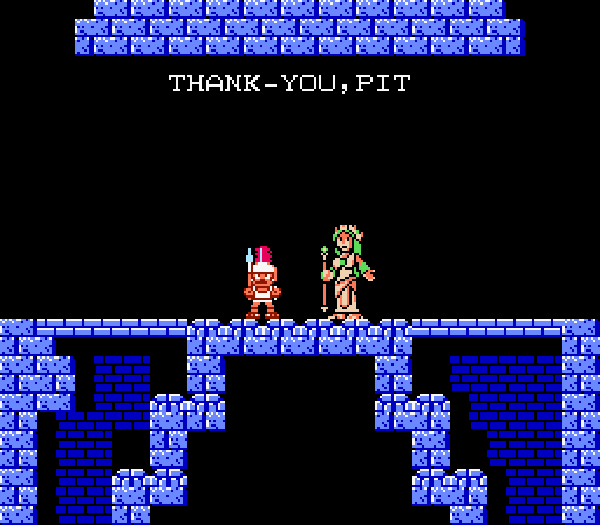 The game itself has become a bit infamous for the difficulty of its first stage, though it does make a bit of sense when you’re fighting out of the enemy’s home turf for it to be a challenge. Still, this uneven pacing may have played a part in the game not becoming a household name. That said, anyone who played past it can pat themselves on the backs and enjoy some variety later in the game’s Overworld and Skyworld, including a fantastic final showdown where Pit dons the Three Sacred Treasures of the game and faces off with Medusa with the ability to fly granted to the player.

Envisioned by first time designer Toru Osawa as an action game with role playing elements, Kid Icarus borrows heavily from the three earlier mentioned series. The game worlds had verticality to them ala Metroid, with Pit’s ability to infinitely fire arrows most like Samus’ own arm cannon. The connections with Metroid are definitely the most prominent, this in part being due to the team behind Nintendo’s sci-fi series almost immediately moving on to assist in Kid Icarus’s own development. Gunpei Yokoi himself served as director, and Yoshio Sakamoto barely had time to relax between Metroid’s completion and beginning work on Kid Icarus. The game’s development was rushed and limited, with a deadline approaching fast. Thankfully, one area where the game didn’t falter was with its music, another fantastic soundtrack by Hirokazu “Hip” Tanaka. Levels and features had to be dropped and the credits weren’t even included in the Japanese release, but Hikari Shinwa: Palutena no Kagami was completed with only three days to spare before it was released on time on December 19th, 1986.

Another hallmark of the series lies in it being a bit surreal with its enemies at times. While there are enough enemies, such as Grim Reapers (able to summon miniature Reapettes as well), the enemy most commonly associated with the games is the Eggplant Wizard. With powerful magic at their disposal, Eggplant Wizards actually change poor Pit into an eggplant until he can make his way to an in-game hospital and have the curse removed. It doesn’t fit the game’s theme whatsoever, but thanks to a recurring role on Captain N and a presence across the series, it’s definitely earned its keep. Its home is among giant eyeballs, floating Groucho Marx-esque glasses, and “definitely not Metroid” Komaytos – throw it all in a blender, hit frappe’, and you’ve got a game that’s just strange enough to work.

The next game in the series, Kid Icarus: Of Myths and Monsters, was released in 1991 in America for the original Game Boy. Oddly enough, it was never released in Japan ’til recently via the eShop, though the game isn’t exactly all that notable beyond this quirk. While it does a fine enough job of presenting the same style of gameplay and allowing for portability, it didn’t exactly push any boundaries. With the original Kid Icarus already being more of an underground game to begin with, there wasn’t much of a reason to pay mind to this sequel. It was after this that Pit and his world slipped into obscurity for over a decade, with an occasional nod or reference coming along. Super Smash Bros. Melee cared enough to give a trophy for the flightless angel back in 2001 with a simplistic, cartoonish design that seemed inline with his sprite and the sensibilities of fellow obscure NES representatives, the Ice Climbers. It became one of the most notable with a single line:

“Will Pit ever fight again?” 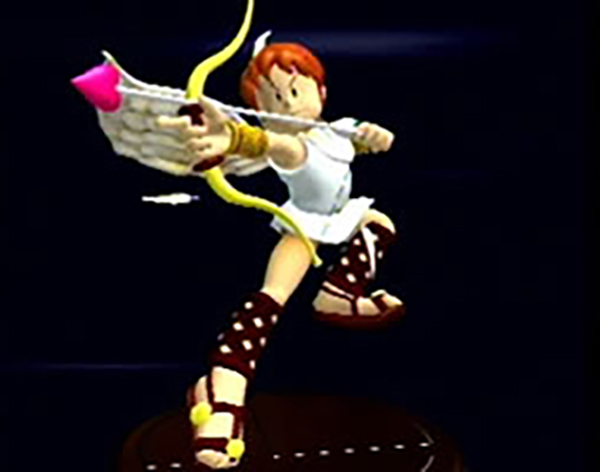 It took another seven years from that point, but sure enough, Pit was one of the first revealed characters for 2008’s Super Smash Bros. Brawl. Rather than maintain the Melee trophy design, he instead had a more detailed and anime-inspired look. With regards to designing this version of Pit, Smash Bros. director Masahiro Sakurai suggested it be done as if the Kid Icarus games were releasing frequently and Pit gradually evolving to a current point. This appearance did wonders for the guy’s popularity and prominence, with a stage based around Skyworld and plenty of fantastic music finding its way into the crossover. Pit scored one of the more prominent roles within the Subspace Emissary mode, teaming up with Mario himself early on. Palutena herself even managed a cameo, both in the story mode and as part of Pit’s final smash. It was definitely a success for Kid Icarus as a whole, but little did players know where it would lead beyond this point.

E3 2010 was a great one for Nintendo overall, with Skyward Sword, Kirby’s Epic Yarn and Donkey Kong Country Returns headlining the Wii offerings that were to come in the near future. But the 3DS, having just been revealed a few months before, had nothing to really show for it leading into E3. Cue the trailer, with an ominous build up.

But wait… That was a woman with snakes for hair, right? That was Medusa, right? Some of those enemies looked awfully familiar. And that green haired woman was Palutena’s design from Brawl, wasn’t it?

And then it happened. Pit, with some updates to his Brawl redesign, ran in from the side, and lept from blackness into an open door to blue, cloud-filled sky. With one sentence I was smiling:

“Sorry to keep you waiting!”

That Kid Icarus: Uprising trailer was my most viewed from that E3, which is saying something with how big and known of a Kirby fan I am. It showed exciting flight sequences, with enemies and attacks that needed to be dodged and fired upon with full, free movement. There were land battles where things changed to a whole new, unexpected playstyle. Weapons weren’t limited to bows, with things like claws and rods shown off. Voice acting was prominent in the footage shown, something that most Nintendo games don’t feature, the likes of Star Fox being a notable exception. The music was uplifting, with prominent electric guitars paired with symphonic swells befitting of the antiquity themed action unfolding. But most importantly and tellingly was that it was being handled by Project Sora, the team headed by none other than Masahiro Sakurai. Pit was now in the hands of the creator of Kirby and Super Smash Bros., two of my absolute favorite anythings. This was Kid Icarus: Uprising, the first 3DS game shown to the world on the E3 stage, and I wanted it ASAP.

The Miracle of Flight

It would take a few years, but in March 2012, Uprising was released and brought Kid Icarus back to the spotlight. It was a feature filled reimagining and made the game and its characters something completely new while maintaining many of the elements that had remained memorable with the series. Pit, Palutena and Medusa were all back as were many of the familiar enemies and songs. Along with them came even more oddball creatures to battle, a greater scale to the game’s events, multiplayer modes, weapon variety and crafting, and a two part system to its stages where Pit would begin the level in flight for about five minutes (the best the angel can manage with Palutena’s help) and then would land to battle it out on foot. Every weapon could be used at far and close range with special attacks and abilities available as well, and some fantastic boss battles to cap off the episodes. 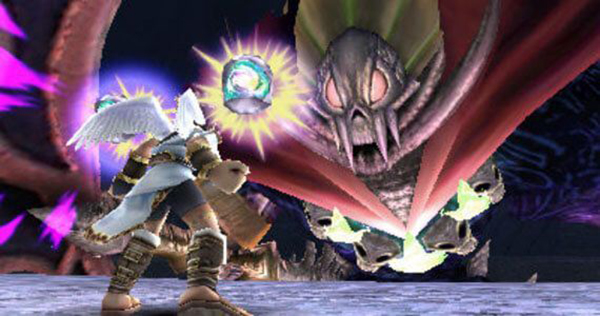 “Episodes” really is the best word for these, as the game’s new defining trait had to be its focus on story. Again, Star Fox might be the most apt comparison within the realm of well known Nintendo games, as now Pit chatted with Palutena and other characters throughout the levels, but without ever stopping the action. These simply happened independent of your actions, in all its self-aware glory and with fantastic performances throughout. By painting all parties involved as a little morally gray, introducing several new characters to this world, and having them dip from comical to referential of the original to dramatic across its length, it held my attention and interest the whole way through when it could have simply relied on its gameplay. The new life breathed into Kid Icarus by Sakurai and his team has effectively made it substantial in Nintendo’s lineup, with an increased presence in the fourth Super Smash Bros. game being indicative of that. The game wasn’t perfect, however, with its biggest hurdle being the way the controls worked. Requiring a mix of button based and stylus control that could lead to awkward hand positioning and cramps after prolonged play, to Nintendo releasing a stand for your 3DS alongside the game for comfort, gameplay could be more than challenging at times.

I could go on about Uprising, such as how it features one of my favorite difficulty based mechanics or was one of the first games I really got into StreetPassing with, or how its soundtrack brought together the likes of Motoi Sakuraba (known for his work within the Tales series), Yuzo Koshiro (prior works including Streets of Rage and Shenmue), Masafumi Takada (the man behind the music for God Hand, the Danganronpa series and multiple games by Suda51) to create one of my favorite modern soundtracks in all of video games. Instead, I’ll mention that this game is still one of my most played on the 3DS and pushed Kid Icarus from a series I knew of and respected to one I wholeheartedly adore. These are games that may not stand shoulder to shoulder with those Nintendo mainstays that came before it, or even ones that came after it. But that’s okay. Kid Icarus soars along as it sees fit, and while it might be a long time before we see another chapter in Pit’s adventures, I know it’ll be something special. This is a franchise that knows how to make an impact without ever burning out and crashing down, having a whole sky to savor without flying too close to the sun.