A brief Q & A about the Switch via Famitsu

After its reveal yesterday, Nintendo is sure to be bombarded with questions about the Switch leading up to a more formal showing of the console. One of the first publications to manage a brief Q & A was Japanese magazine Famitsu, who had a few key questions.

First and foremost they asked if it was a successor to the Wii U. Nintendo gave a very “them” answer, stating that while it is their next home console there’s nothing else like it and that using terminology like “successor” isn’t exactly fitting. They’d prefer “new console” and judging by the features seen in its reveal that’s an apt statement to make. 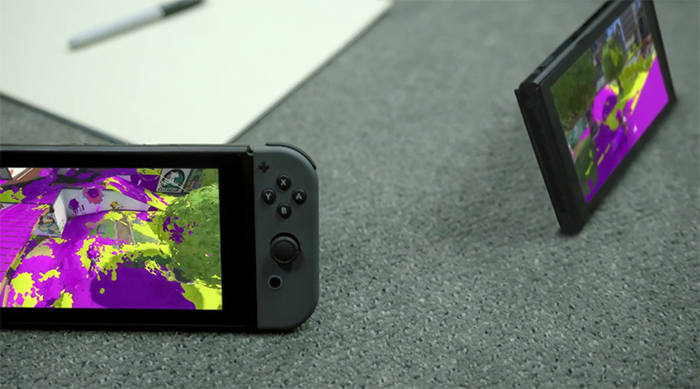 Backwards compatibility was discussed, though unfortunately it will not be supported in a physical form with the Switch. As it lacks the means to even insert a disc of any kind this makes sense, but it was also specified that it won’t be able to run 3DS cartridges either. This is in the face of several rumors that floated around before its reveal, and is likewise a the first time since the GameCube that a system hasn’t been able to play the games of its immediate home console predecessor. This doesn’t rule out some sort of digital means of backwards compatibility as of this time but only time will tell.

It’s also unknown if it will be able to run smartphone games, though rather than an outright denial that question elicited a “no comment” leaving the door open for now. The same answer was given in regards to the specs on the Switch’s game cartridges. Clarification was given in regards to the Joy-Con as well, stating that the two sections that can frame the Switch are considered a set, meaning that from a marketing perspective they would need to be sold together. That said it doesn’t confirm that they will be readily available outside of purchasing a system, as the GamePad was and still is a bit difficult to replace compared to a more standard controller.

The question on most people’s minds in regards to the Switch concerns it battery life when out and about and when asked it could only be said that more information would be given at a later date. They did state that it was designed to play “as much as possible” and “comfortably” when separated from a power source, though what exactly that entails remains unknown.

It may be some time before we hear next about the Switch in a presentation like manner, but hopefully more snippets of information come out like these. With about five months to go till its March launch there’s bound to be, and we’ll be bringing it to you all the best we can. Stay tuned!