With Color Splash being a massive improvement for the Paper Mario series, it now feels like the games are at a point of side steps rather than setbacks. For better or worse, the formula and standards have been changed. Super Paper Mario on the Wii has its fans as well, more so for the core narrative, but it’s clearly at the point where things started to veer away by removing the turn and party based RPG elements. While the more recent entries have their fans and strong points, it seems far more often that the original N64 game and (more fervently) its GameCube followup are what fans think most fondly of. With both the release of Color Splash and the anniversary of Thousand-Year Door having just passed, I thought it only proper to look back at what made that game so memorable and endearing that many would sooner want a return to that style, or even just a port of the game itself rather than another round of stickers and things.

Thinking back to when I purchased Thousand-Year Door is a treat in and of itself. I had made myself ready for this one, having poured over the issue of Nintendo Power it had the cover treatment for over and over. 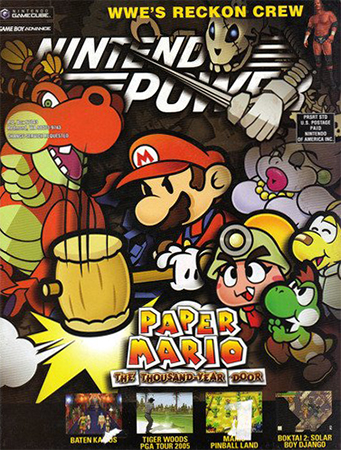 I begged my older brother to let me use the TV to get a chance to start the game – and start it I did. Exploring Rogueport, the game’s hub and introductory area, was something I’d never personally experienced in a Mario game. It was seedy, ramshackle, and seemed altogether unpleasant. A far cry from Toad Town on the N64, Rogueport was a place I’d never expect Mario to explore, but in doing so it set a salty, adventurous atmosphere almost immediately. It evoked a piratical theme and a strong sense of identity that made the game in its entirety feel exciting right away. Once you hit the sewers and discover the titular Door, it becomes clear that this is a game all about secrets: some exciting, some treacherous, but all memorable. Even if I soon found myself in a docile, grassier area populated by friendly Koopas, it gave way to a draconic devourer and its dank lair soon enough. Almost every chapter of the game follows this trend, of an area with something to hide that must be discovered and in time resolved. 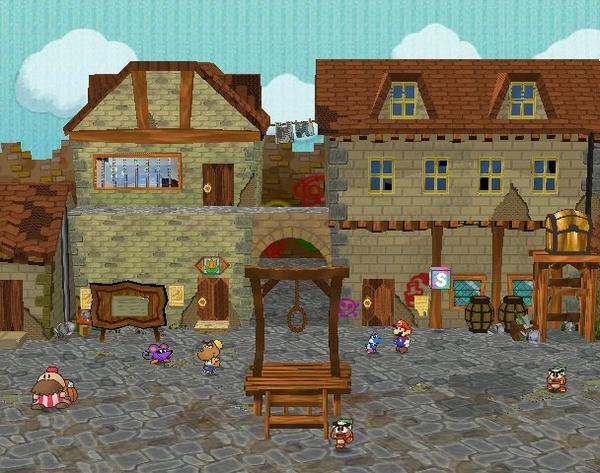 So if every chapter follows that kind of formula, then what’s so great about it? Repetition shouldn’t be praised, and thankfully nothing about the game feels repetitious. It’s instead brought to life by the cast of characters that rotates on and off the stage in time to the discoveries. At the forefront are your partners throughout the game, each with a story to not only tell, but to share with you and a degree of personality to every single member that the entire casts of recent games cannot measure up to. My personal favorite was the young Yoshi you hatch and name, a little braggart of a dinosaur who’s embraced his birthplace by behaving like the most adorable professional wrestler I’ve ever seen.

It’s the little touches that stand out to me – like Yoshi almost always referring to Mario as Gonzales, the stage name he had to fight under throughout that chapter. Alongside him are the likes of Vivian, a former enemy shadow spirit who Mario befriends after she’s abandoned by her (abusive) sisters, and Admiral Bobbery, an old sailor of a Bob-omb with a past he’d rather leave behind. It’s not just the partners though, with NPCs and bosses giving substance to the entire game. Mafioso Piantas, an improbably large brained penguin, and a foppishly extravagant – whatever Flavio actually is – managed to liven up the adventures. When it comes to bosses, the doppelgänger Doopliss and multi-armed Cortez both stand out to me, though nobody outshines the one and only Rawk Hawk. 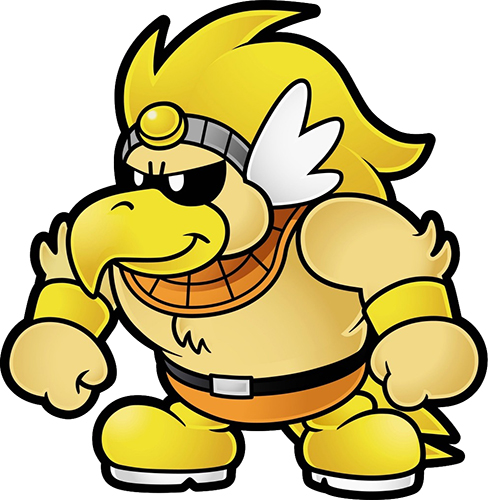 With a world and characters this robust it would be shame if the experience were bogged down by something like an inability to increase in strength over time or some kind of system where attacks are tied to limited use collectibles. Thankfully, Thousand-Year Door has so much going on under its hood that I’d argue it’s the most fully featured of any Mario RPG. While the Mario & Luigi games have their flashy Bros. moves, and Super Mario RPG manages to hold up even to this day, it’s this GameCube darling that absolutely tops them by improving in every way on what the original Paper Mario did.

Not only did you have Mario’s host of jumping and hammer attacks and the individual abilities of his partners (all of which could be added to and strengthened with either scripted upgrades or discoverable items), but the game’s collectible badges allowed for a supreme degree of customization in how you played, be it an overall style preference or a rotating collection to suit a given chapter’s needs. There were even badges that simply changed Mario’s color or the sounds he made on attacking enemies, with the latter serving as the key to defeating an early boss. Upon a level-up, Mario would even get to choose which of his stats to increase from heart points (health), flower points (energy for special attacks), and badge points (increasing the amount of badges equippable at a time). By allowing the player to choose how their strength increases with every level-up, there are different ways to approach the entire game, such as a low health run where Mario can be a versatile powerhouse that can’t take a hit. Maybe that isn’t for everyone, but Thousand-Year Door lets me make that decision, rather than omit the ability to upgrade myself altogether. 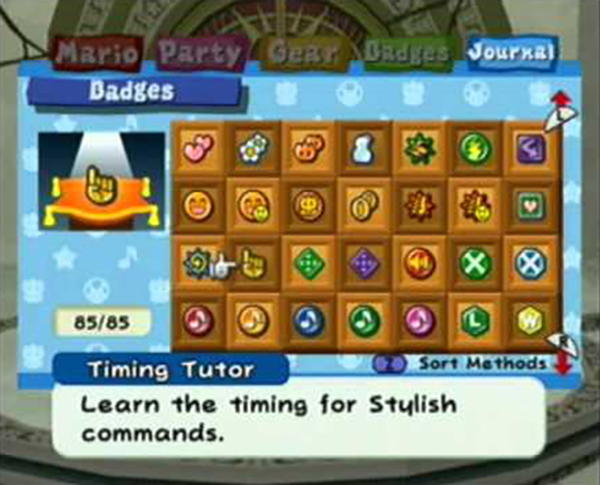 The most powerful tools of Mario’s arsenal though were the main collectibles of the adventure: the Crystal Stars that his treasure map lead him to, and the key to opening the Thousand Year Door. Each of these, and even the map itself, offer a particularly useful or overpowered skill to our hero – though it’s how they’re fueled that turns the battle system into a real treat. Every fight in the game takes place in theater, with Mario, his allies and his enemies on the stage. Your audience grows with your successes, and likewise, offer up star power, the energy source of these special abilities. Timed hits return once again, and with rhythmic, cued button presses you get not only more damage or effectiveness, but also some stylish animations and big cheers from the crowd. While the improved attacks that come from timed hits could have been their own incentive and reward, having an audience that’s actively responding to and offering benefits based on your performance adds a greater tangibility to your actions. You’re not the only one who gets benefits from them though, as certain enemies and bosses are able to interact with them in varying ways. The stage motif also allows things like the backdrop to topple onto the foreground and light fixtures to drop from the ceiling, making for some interesting moments and flavor. It doesn’t get noted in the narrative, yet it’s still such a core part to the game’s identity. With the likes of 3D visuals on the 3DS and the potential for a larger or even split party on the GamePad, it’s a shame that this feature wasn’t retained in some capacity.

Thousand Year Door was also the point where the games started to really embrace the paper aesthetic in a self-referential fashion. While it could be said the theater battles mentioned above enhance the diorama feel, it was Mario’s exploratory abilities that ironically added depth to this flat world. For example, by turning his body he would become completely flat to the player’s point-of-view, allowing him to slip through extremely thin gaps. Similarly he would fold into a paper plane in order to cross certain gaps, roll into a tube to fit under low hanging obstacles, and become a paper boat to drift up streams. I think these were just the right amount of papery goodness in the game, though in time it could be said this was the start of the transition to what Paper Mario games are today. Every game since has done something more with this in mind, such as the drastic world flips on the Wii, the transformations used for exploration in Paper Jam, and the more referential systems of Sticker Star and Color Splash. Thousand-Year Door knew how to balance this with its own identity. It was the perfect blend of Mario and RPG with a paper aesthetic rather than being a mixture of Paper and Mario with some RPG elements. 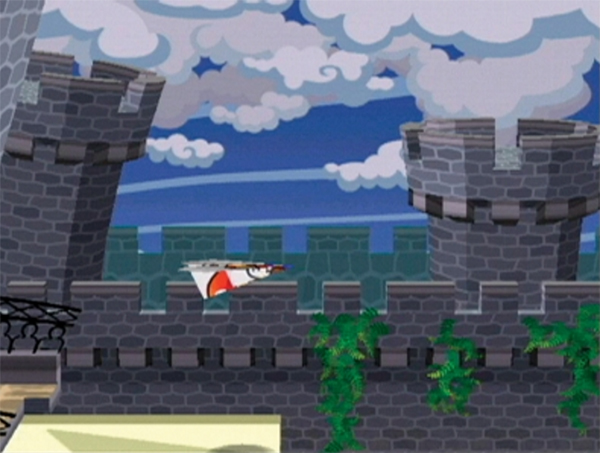 While I absolutely want to see another Thousand-Year Door style game come along, I still have respect for the current games. I don’t like them nearly as much as the first two, but I also can enjoy their writing, their music, their visuals, and even their gameplay. It’s the loss of character that leaves me wallowing in a sea of paper Toads, and no matter how much I do enjoy what’s there, I’ll always want what once was all those years ago. Here’s hoping that Nintendo doesn’t completely forget the roots of this fantastic series going forward. It’s incredibly important to remember that even if these current games are enjoyable and aesthetically pleasing, it’s the story that makes a special game truly stand out.