As I comb through countless memories with The Legend of Zelda series, many iconic characters, landmarks and icons spring to mind. I’ve mentally blueprinted the various incarnations of Hyrule Castle and Kakariko Village that have been imagined and reimagined over the years. And the many townspeople, sages, and companion characters of the series have left a lasting impression on me, to say the least, with memories involving Princess Zelda, the evil king Ganon (sometimes dorf), and our ever-destined hero Link will always, and rightly, take center stage. There’s a certain object in these games, though, that might be just as iconic as the Hero of Time himself, but it doesn’t often get the direct recognition and appreciation that it deserves: The Master Sword.

Of all the tools, weapons, mounts and artifacts that Link has employed throughout his many adventures, the Master Sword is easily the most recognizable; but its importance goes far beyond aesthetics. This blade has also been brilliantly woven into the plots of the greatest games in the series. Discovering, recovering or restoring the Master Sword in a Legend of Zelda game is always an epic moment, one that evokes a sense of euphoric satisfaction that no other game can match.

Like so many elements of the series, the Master Sword’s presence and role in Zelda games has been reimagined many times throughout Hyrule’s history. Divinely crafted, imbued with the power to repel evil, and sometimes inhabited by a companion spirit, this (mostly) inanimate weapon has accrued more personality over the years than most actual video game characters ever do. Everyone has their own first or most moving interaction with the legendary blade, but here are a few instances that we think stand out as the most memorable Master Sword moments.

A Link to the Past (by Brittin Shauers)

Link thought of his kindly uncle as he grasped the grip of the sword at his waist. The stormy night that claimed the only family he had and sent him unwittingly toward this unfathomable destiny was crystal clear in his mind. His journey had already dragged him through ancient temples, across scorching deserts and to the perilous peak of Death Mountain itself; now one final task remained: Somewhere in the heart of the Lost Wood he would find the sword of legend, and with it the power to defeat the evil wizard that threatened to bring a long-banished darkness back to Hyrule… 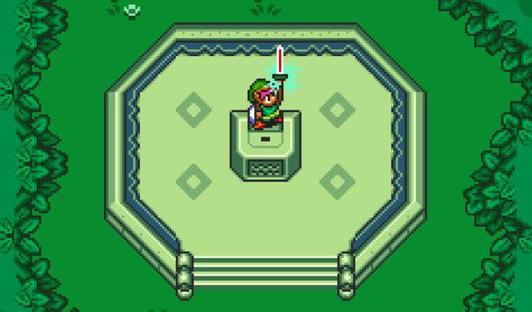 This was roughly what was going through my mind as I entered the dim and misty forest of A Link to the Past’s perfect vision of Hyrule. I had just been on what felt like a full game’s worth of adventure, and assumed that I was nearing the story’s epic finale. The only downside, I thought, was that I was about to retrieve the legendary blade that I had heard so much about, and would only get to use it for the game’s final dungeon and boss. At 9 years old, I obviously I didn’t give A Link to the Past nearly enough credit, as it still had many massive surprises in store for me.

The peaceful scene that is the wooded resting place of the Master Sword existed in stark contrast to most of the land around it. It served as a final respite before the showdown with Agahnim and the revelation of the game’s warped and bleak second act. I felt a true sense of reverence as Link approached the blade’s altar, recalling the trials we had overcome together to earn the right to wield it. The triumphant fanfare, blinding flash, and crisp “shing” of the blade as Link drew it from the etched stone and raised it high overhead perfectly articulated my excitement. As the mists cleared and sunlight dripped through the forest canopy, I felt fully rejuvenated and more than ready to take on whatever the game had in store for me next.

Ocarina of Time (by Ben Fruzzetti)

Nobody forgets the first time they step into the Temple of Time. Even before you enter the building, you see the stone church-like building set up at a towering angle above young Link’s head, contrasted next to a shot of Death Mountain simmering in the distance. Upon entering, you see halls of simple white and black, accompanied by a low hymn that speaks not only to the mysticism but the mystery of the place. You put the Spiritual Stones in their proper place before the Door of Time, pull out your Ocarina of Time, and play the Song of Time (noticing a pattern?) Finally opening the door to the inner sanctum. And what awaits… is the Master Sword.

Bathed in a single ray of light in a room otherwise shrouded by darkness, the visualization of such a legendary weapon in such a state inspires awe. As a hopeful jingle bristling with anticipation begins playing, tiny Link waddles up to the Pedestal (of Time), climbs on top with his stubby child legs, and pulls out the blade with a dramatic shout, flooding his vision with azure light… Only to discover that this is what the villain wanted all along. 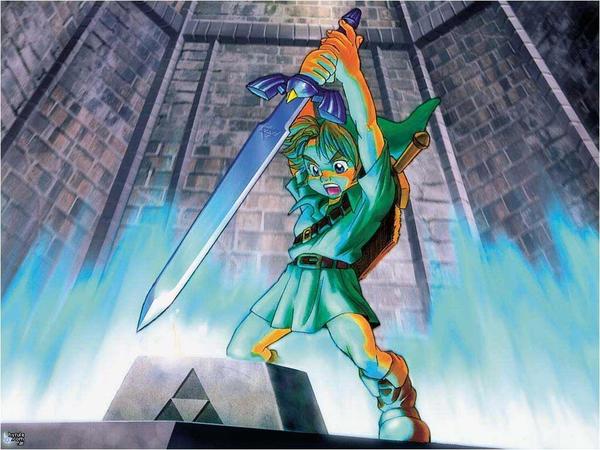 It’s fascinating, to me, that such an iconic scene of heroism and discovery is in fact detrimental to the hero’s quest – setting him back seven years and drowning the kingdom in darkness – but the sheer coolness of the Master Sword eclipses these concerns. Both a weapon of power and a plot device, as much a time machine as it is a blade, Ocarina of Time effortlessly conveys the history, power, and importance of the sword in only one scene. So much so that the image of the sword stuck in its pedestal has become more than legendary, an icon not only of the game, not only the series, but even gaming as a whole. And no matter how many times I’ll pull it from its resting place, that first time will always resonate in my mind.

There’s something hauntingly fascinating about the murders of Sages Laruto and Fado that has captivated me since the day I first learned about the lore behind the Master Sword in The Wind Waker. While the Legend of Zelda series has never been one to shy away from dark subject matter, rarely had it ever dipped its toes into something as evil as homicide (see Link’s Uncle above). Yet this is the basis for the story behind the blade, and why it is up to Link alone to restore it back to greatness.

Standing quite literally as the key to unlocking Hyrule, the Blade of Evil’s Bane (as it’s primarily known as in The Wind Waker) is drawn from its pedestal by a young Link, and young George watched in amazement as he waited for a spectacle that he could have never predicted. The fanfare, bright lights, and sheer power Zelda fans had become so accustomed to upon unlocking the iconic weapon was, for the first time, completely different. The sword didn’t shine. Its strength didn’t surge through Link’s veins. And the sword itself was certainly nothing to behold. But I watched. I watched as color, music, and life was returned to the once sunken Kingdom of Hyrule, and I knew something big was on the horizon. 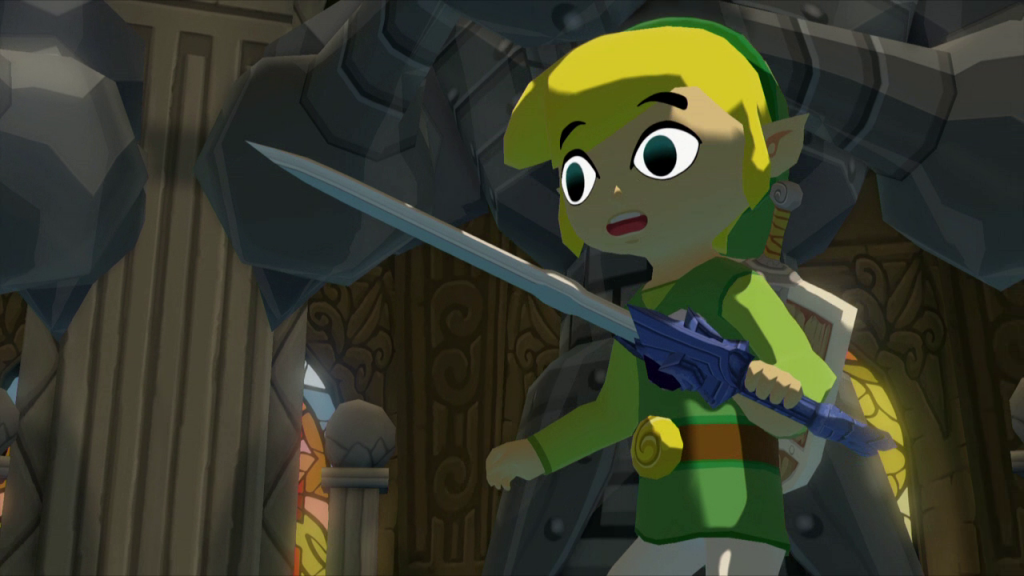 The Master Sword’s relevance is no doubt important throughout the entirety of the series, but it stands as especially important in The Wind Waker not only for its ability to slay the nefarious Ganondorf, but also for completely locking away his dark magic and the havoc it once wrecked. And while Link may have needed to release that power back to Ganondorf, he simultaneously restored the kingdom the series is known for, and helped two young friends find their true places in life. If you ask me, the Master Sword in this game has more depth than most other fictional characters do.

But above all else, I’m not sure a single moment in the Zelda timeline can beat the almost eerily majestic final boss fight of The Wind Waker. There are no words to describe the chilling image of a slain Ganondorf with the Master Sword impaled straight into his forehead. This, to me, is better than any scene of Link withdrawing the sword from its pedestal. As Ganondorf’s cruelty makes it back around to him and he turns to stone with the temple collapsing around him, the Master Sword is buried back under the ocean to seal away the Gerudo King for good (?). It’s quite hard to put the magic this scene holds into words, and to this day I’d argue that there isn’t really another moment like it in the franchise.

While the Master Sword has been important in many of Zelda’s legends, none of them can match its importance in Skyward Sword. After all, it’s the game’s namesake. 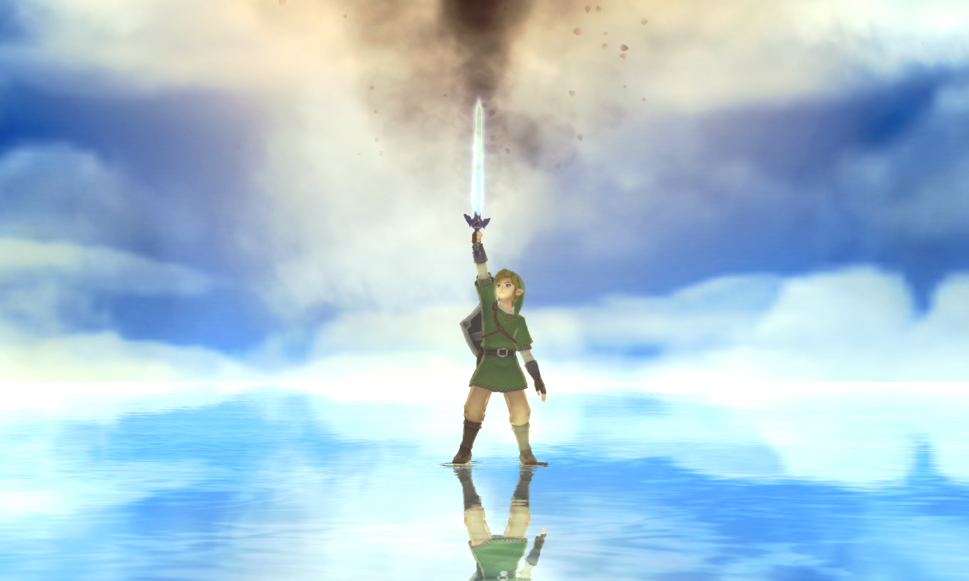 As the game is a tale of the Master Sword’s origin, the blade doesn’t even have its iconic name or design until Link has tempered it after multiple trials. It is this gradual development that stands out to me the most, more-so than the similar process it goes through in Wind Waker, as each time the sword upgrades its form you get a sense of how far Link has come as a hero.

First it is blessed by the flames of Farore, growing lengthier and more powerful. Then the wisdom of Nayru imbues it with the power to sense nearby treasures and relics, a boon for any budding adventurer. Finally, with Din’s Power, it takes the shape of the Master Sword, but its desaturated colors make it clear there are even more challenges to overcome. Its true, final form is awoken during the emotional parting of Link and Zelda, where she implores him to defeat the destructively evil Demise, even if it means losing her once more. This blessing is the most pivotal moment in the sword’s known history, as it is fundamentally what makes it the “blade of evil’s bane” for generations to come.

All of these developments are paralleled by the spirit within the sword: Fi. While she may be controversial with fans, perhaps justifiably so, it’s undeniable that she embodies the elegant beauty of the sword itself. There’s also a strange sadness to her ultimate end, which sees her lay dormant in the sword that will go on to be used by countless reincarnations of the green-garbed hero who made her feel happiness for the first, and final, time. What other franchise can make you empathize with a sentient sword?

We’d like to leave you with one final Master Sword moment. Unlike the epic sequences we’ve recounted above, this was a moment of light-hearted joy and irreverence; yet somehow it remains one of the blade’s most iconic and memorable appearances. Without any further ado, I give you Nintendo legend and the mastermind behind The Legend of Zelda, Mr. Shigeru Miyamoto: 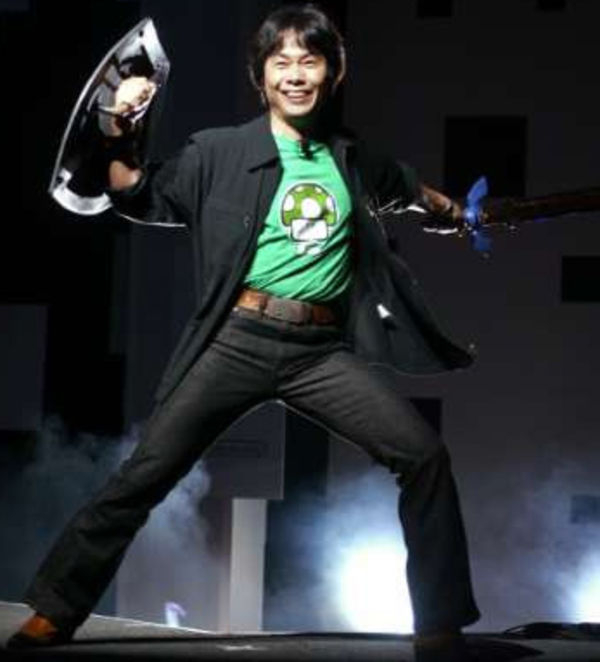 Did we miss any of your favorite Master Sword moments? Let us know in the comments!