Having a hauntingly good time with Luigi’s Mansion Arcade

Strolling through one of the multiple, local arcades in Japan can be a bit overwhelming. So many machines, so little time (and yen), but sooner or later something will call out to you. While it wasn’t my first adventure, as soon as I saw the large, enclosed machine with familiar art on the outside, I knew I had to play Luigi’s Mansion Arcade. Featuring the man in green himself on the outside, I couldn’t hold back a smile at the familiarity. That just grew when I pulled the curtain and stepped inside.

The interior was dark, with some bright touches via pictures of various ghosts: perfectly fitting for the haunted atmosphere. After surveying the walls and screen I looked down to see exactly how the game controlled and was blown away (or rather sucked in) by what I saw. Instead of typical joystick and button combos or some kind of simple controller I was instead greeted by a perfectly sized Poltergust-styled controller. With just the right weight to it, it felt satisfying to move it around and added to the entire experience. 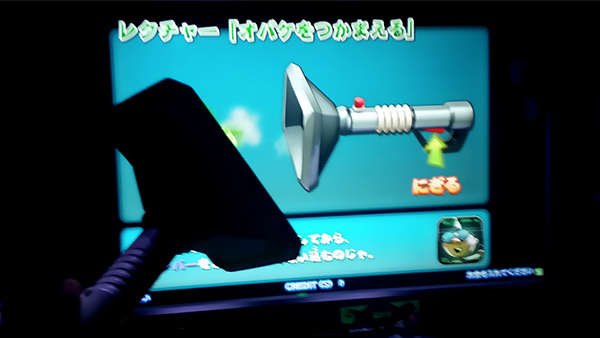 Luigi’s Mansion stands out as one of the GameCube’s finest titles, enough so that it eventually received a sequel on the 3DS in the form of Luigi’s Mansion: Dark Moon. While I personally prefer the original game, Dark Moon was enjoyable and featured some great style and one of my favorite multiplayer experiences on the handheld. I’m happy to say that those two points carried over wonderfully to Luigi’s Mansion Arcade. This game’s a blast to play with friends and the larger screen allows Dark Moon’s style to really pop in front of you via a new-to-the-series first person perspective, and in doing so feels more lighthearted and surprising than ominous and gloomy like the first game – and it works spectacularly. Coupled with the Poltergust-styled controller, you really end up feeling like Luigi as you tour the various mansions and areas from Dark Moon, catching ghosts and grabbing cash the whole way through.

Moving around within the game

Movement is automatic, like many other shooter arcade games. You aim the Poltergust at the screen and have two buttons at your disposal: one for the Poltergust itself and one for your flashlight. Using these in tandem, just like the games, is crucial to succeeding, maintaining the flow of Dark Moon in particular as the strobe function returns as well. Once you have a ghost vulnerable, your Poltergust acts like a fishing rod: pull away from the direction the ghost is running to keep it from getting too far. Rumble from the controller lets you know when a harder pull might be needed, making it physically engaging and ultimately satisfying once a ghost is caught. 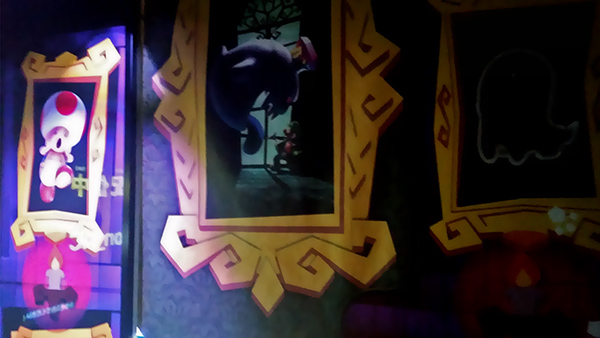 In between ghost catching, you can aim at vases, lights, and other mansion fixtures in the hopes of finding money. These add to your score and created one of my favorite discoveries about the game. Whenever I was sucking up coins, my Poltergust controller actually rattled as if it were taking in something solid instead of the ethereal rumble associated with ghosts. It was a small touch, but one that felt great in practice, adding nothing to the gameplay but increasing my enjoyment and immersion fantastically.

The real joy of this game is via multiplayer, with two players possible within the machine. Each gets their own Poltergust, and while cooperation is key to handling swarms of specters, it instantly becomes competitive when hunting for money. While ghost grabbing is important, I found that the winner of each stage always came down to who had the fattest stacks of cash and created some great verbal confrontations all in the name of fun. It’s the same kind of multiplayer magic you find in the likes of Mario Party or Smash Bros., keeping the fun alive simply by adding that N-factor to the occasion. 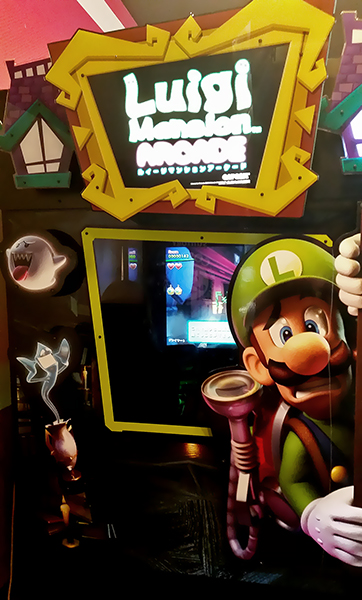 I got ample time off of my initial coins – as long as your hearts aren’t depleted you keep going and going. There were what looked like three mansions total, each of which had multiple sections. Even a single mansion lasted a good ten to 15 minutes, with the action paced well. Every mansion ends with a boss fight as well, adding puzzling elements and the perfect level of challenge to the gameplay. While I couldn’t “complete” the game by taking on every mansion, I left satisfied and would definitely like to take it on again in the hopes of getting further and seeing more of what the mansions had to offer. The difficulty definitely ramps up over time, with more ghosts coming along at a time and those new ones having more complicated means by which you need to captured them. That said, the game never felt frustrating, though again that could be due to the added spice of multiplayer.

Paying homage to the original

That does it for my first arcade adventure, but rest assured you’ll be hearing more about my times in these gaming havens. That said this one bears special mentioning as a send up to the anniversary of Luigi’s first frightening foray. As a part of that lineage, Luigi’s Mansion Arcade lives up to its predecessors fun gameplay, not exactly (fittingly) gloomy like the first game but making up for it with frantic action and spooky surprises. If you ever spot the game, I fully recommend giving it a try, with Dave & Buster’s sometimes featuring its unmissable cab.