The Cruis’n franchise was an arcade staple throughout the mid to late ’90s. The series distinguished itself with its fast, dynamic gameplay and colorful, over-the-top tracks based on real world locations. Racing head to head with a slew of other cars while tangling with a freight train was exhilarating. After extended periods of downtime, a couple handheld entries, and a lackluster entry on the Wii; Cruis’n has finally found its way back to arcades with a brand new entry in the series: Cruis’n Red Line.

Three titles – Cruis’n USA, Cruis’n World and Cruis’n Exotica – were released in arcades from 1994 to 1999, developed by Midway Games and licensed by Nintendo. All three titles were eventually released for Nintendo 64, with Exotica also seeing a port for Game Boy Color. Another handheld entry, Cruis’n Velocity, was released for Game Boy Advance in 2001. 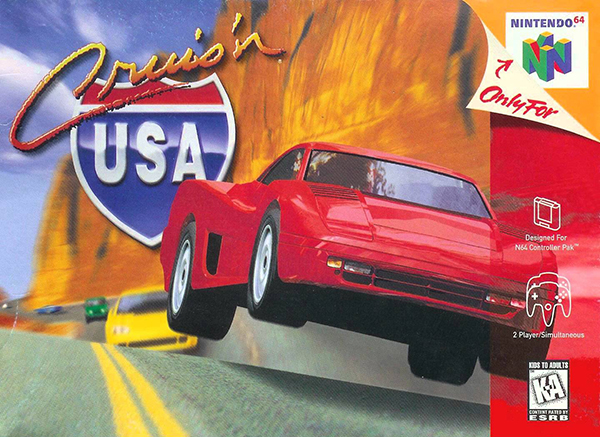 In 2004, Eugene Jarvis, the lead developer of the original Cruis’n Games, founded a new studio: Raw Thrills. The studio’s first project was an arcade racer based on the 2001 film The Fast and the Furious; it was heavily inspired by the Cruis’n series. A few years later, the game was stripped of its Fast and Furious branding and ported to the Wii under the title Cruis’n. It was not well received.

This May, a brand new racing arcade cabinet appeared in an arcade at a Chicago movie theater. Titled Cruis’n Adventure, the new game was announced to be in development by Raw Thrills and again licensed by Nintendo, as evidenced by the logos all over the cabinet. 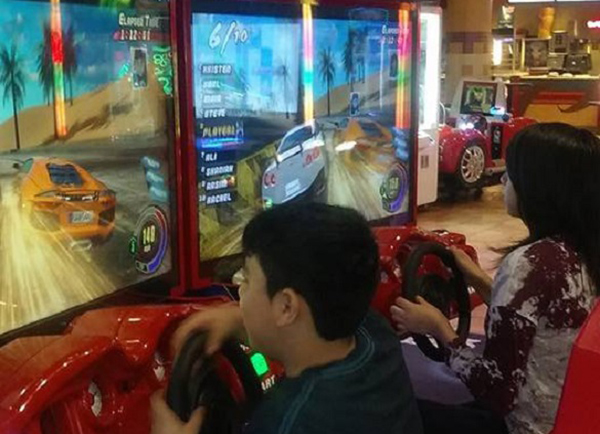 Over the past few months, the game has been in a test phase in the windy city, and since its May debut has undergone some significant changes. It’s also been given a new title: Cruis’n Red Line. Our colleagues at Polygon recently stopped by the arcade in question and took the new racer for a thorough test drive. 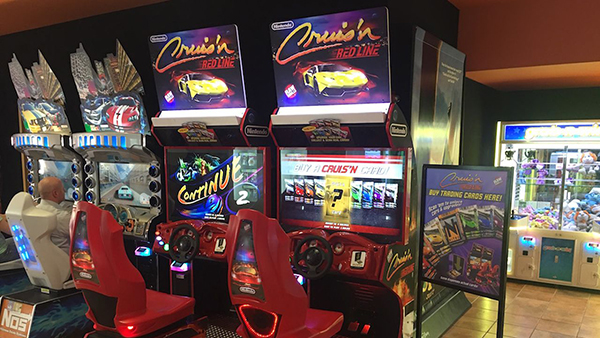 The current build of the game boasts five tracks: Mojave, Madagascar, London, Rio de Janeiro and Singapore. In keeping with the fast, frantic themes of the series, most of the tracks incorporate some fantastic spectacle to keep you on your toes and to provide some absurd eye candy. There’s an homage to Cruis’n USA’s train race, a rolling, dismounted ferris wheel, and a rampaging dinosaur, to name a few. According to Raw Thrills, the beta version of the game that went on display back in May represented “a small fraction of what the game will be.”

One more interesting facet of the new game is a physical trading card system. The cabinet has the ability to dispense random cards representing licensed cars and upgrades that could then be scanned for use in game. The original set consisted of 33 cards that were marked as first edition and Oddly, it appears that this feature has been disabled in the current build of the game, instead allowing players to select from a number of cars and upgrades before starting a race. 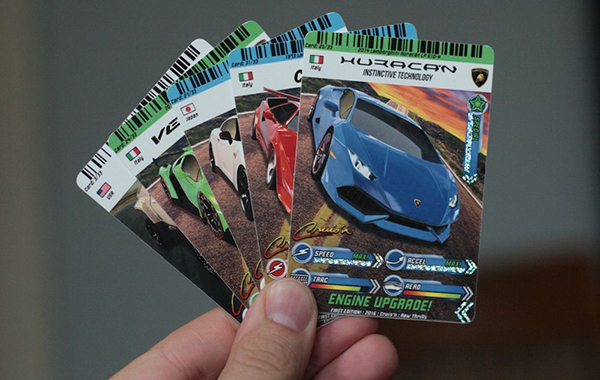 Cruis’n Red Line sounds like a fun, frantic throwback to the arcade racers of yesterday. And who knows, perhaps Nintendo’s involvement and track record for ports with this series could point to a fresh Cruis’n console release at some point in the future.

If you’re in the Chicago area, you can try Cruis’n Red Line yourself. It’s being tested at the Regal City North Stadium 14 movie theater. And if you can’t wait to get a closer look at the newest arcade, here’s the first footage recorded of it from Arcade Heroes on YouTube: