The very best? Exploring Ash Ketchum in the Battle Frontier

Just a quick warning: This article contains spoilers for an episode of the Pokémon anime that just aired in Japan, as well as spoilers for the anime through the Battle Frontier arc. You have been warned!

Since the beginning, Ash Ketchum has inspired Pokémon trainers around the world to be the very best. For the last 19 years, young trainers have turned to Ash as an example of what it takes to be a Pokémon Master. But is that really the case? Has our perpetual ten year-old really done anything of worth to earn him the title of Pokémon Master? Over the course of the week we are going to take a look at some key moments in Ash Ketchum’s journey to see exactly what he has done, and, more importantly, dig in to what he has failed to do, and why.

As Ash is traveling home from the Ever Grande Conference, he meets an eccentric man named Scott who convinces him to take on a new challenge: the Battle Frontier. Ash wastes no time accepting this new challenge; it would give him a chance to travel around his native Kanto once more, since the challenges in the Battle Frontier are located all around Kanto. Each facility is headed by a Frontier Brain, much like a Gym Leader, and each Brain chooses the rules of the battle in their facility.

For Ash’s first challenge, he faces off against Noland, who introduces Ash to all of his Pokémon and then allows Ash to pick which Pokémon he would like to fight one-on-one. Ash ends up picking the strongest possible Pokémon that Noland has: an Articuno. This choice is a sign of Ash’s newfound maturity as a trainer after traveling the Hoenn region. Choosing a legendary Pokémon to fight against shows that he’s ready for a challenge, and that he’s confident in his Pokémon’s abilities. The battle begins, Noland’s Articuno against Ash’s Charizard, called from the Charicific Valley, and the two Pokémon are at it right away. Charizard begins to seem outmatched, only landing a few hits while Articuno is wearing it down considerably. In a last ditch effort, Ash has Charizard grab onto Articuno just before its Steel Wing hits Charizard, and uses Seismic Toss on Articuno. As the dust clears, Charizard is motionless on the ground, and Articuno begins to get up, but then collapses. Charizard struggles to its feet and, along with Ash, is declared the winner, becoming the first non-legendary Pokémon and trainer to defeat a legendary Pokémon one-on-one in the anime. Things are looking up for Ash in the Battle Frontier, but his new adventure is just getting started.

Ash’s next four Frontier battles continue to show that he’s at the top of his game. He doesn’t hold anything back, freely calling on his Pokémon from Professor Oak’s lab when he thinks he’ll need them. He calls on Snorlax for his second battle and fares all the better for it, since Snorlax was able to knock out both of Greta’s Pokémon. It’s after winning his third and fourth medals with the Pokémon he has on hand that we next see a Pokémon from Oak’s lab make a return for a Frontier battle, only this time it doesn’t work out as well. Ash calls upon his Heracross to battle against Spenser’s Venusaur, and it is quickly defeated by a powerful Solar Beam. Ash comes back to win the match with a Solar Beam of his own, using his Sceptile against Spenser’s Claydol to obtain his fifth Frontier Symbol. 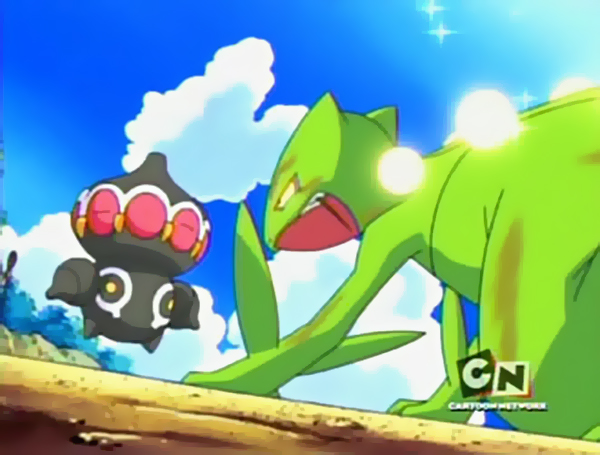 Ash’s first Battle Frontier loss is handed to him by Salon Maiden Anabel at the Battle Salon during his sixth Frontier Battle. He has called another Pokémon from Professor Oak’s lab – this time it’s Tauros – but it doesn’t stand a chance against Anabel’s Alakazam, proving to Ash that battling isn’t just about brute force. Ash is undeterred, deciding to face Anabel again the very next day. This time around, he’s a lot smart about the way he uses his Pokémon, although he uses the exact same team. Anabel’s Alakazam is taken out by Ash’s Corphish this time, pitting Tauros against Anabel’s Metagross. The powerful Pokémon face off, and despite the type disadvantage, Tauros managed to hold its own, resulting in a double knockout. It’s down to Pikachu and Espeon, and Espeon clearly has the advantage until Pikachu’s Thunderbolt shorts out the lights, allowing Pikachu to attack in the dark. This rattles Espeon, and even with the lights back on it can’t seem to stay calm, giving Pikachu the chance to secure Ash’s sixth Frontier Victory.

As Ash travels to his seventh and final Frontier Battle at the Battle Pyramid, he stumbles upon some ruins, and runs off to find Ho-Oh since he thinks an ancient king trapped Ho-Oh inside the ruins somewhere. What he finds is the evil spirit of the ancient king, who is challenged to a battle.by the seventh Frontier Brain, Brandon. The evil king uses Ash’s Sceptile to fight dirty, and it’s easily overpowered by Brandon’s Regirock. After Pikachu shocks the spirit out of Ash, Brandon tells Ash that he is careless and arrogant, and that he will not battle him at this time. Ash begins to train while waiting to hear from Brandon about a rematch. 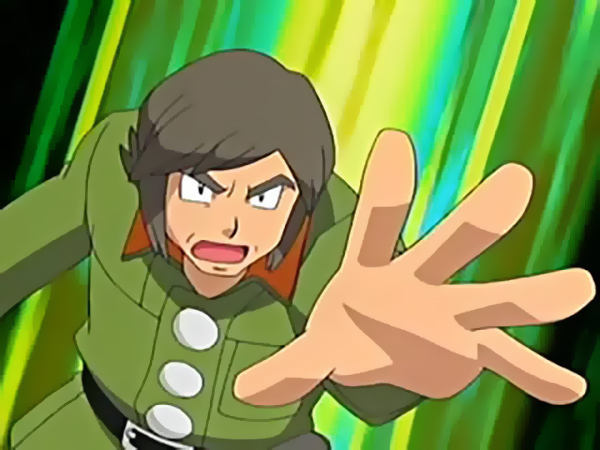 Once Ash reaches the Battle Pyramid again, he’s determined to win, sending out his Torkoal, called from Oak’s lab, against Brandon’s Registeel. The type advantage is not enough, however, and Brandon defeats Ash for his second official Frontier loss. Ash is more focused than ever on winning, since beating Brandon means becoming the champion of the Battle Frontier. When Brandon returns to the Pyramid after searching another set of ruins for a special Pokémon, Ash is ready to battle once again. This time he’s called back all three of his Kanto starter Pokémon: Charizard from the Charicific Valley, Bulbasaur from Oak’s lab, and Squirtle from the Squirtle Squad. He uses these three, along with Pikachu, to take on Brandon in a four-on-four match. The match is intense, coming down to Ash’s Pikachu against Brandon’s final Pokémon, Regice. Pikachu is taking a beating, and a freezing, but manages to continuously break out of the ice with Iron Tail and lands a few hits. Finally, Pikachu charges at Regice with Volt Tackle, dodging an Ice Beam to land the hit, knocking out Regice and making Pikachu the second of Ash’s Pokémon to defeat a legendary Pokémon one-on-one.

With his seventh Frontier Symbol earned, Ash has conquered the Battle Frontier. This is perhaps Ash’s greatest achievement to date and serves as evidence that Ash was in his prime during this time. Scott even offers Ash a position as a Frontier Brain, which isn’t a small offer – since Scott reserves those positions for the the best of the best. While Ash chooses to decline, Scott tells him the offer is always open. Ash wants to travel more, and he can’t do that if he’s stuck at a facility in the Battle Frontier. Determined to go to Sinnoh after learning about it in a postcard from Gary Oak, Ash sets off on another adventure almost immediately.

Stay tuned to Nintendo Wire as we cover this new journey to the Sinnoh region tomorrow!