Often considered the third series in Nintendo’s holy trinity, Metroid has been around for just as long as Mario’s been crashing the wrong castle in search of distressed damsels or Link’s refusal to go it alone. Yet despite this legendary designation, the galactic adventures of bounty hunter Samus Aran rarely get quite as much love and attention from the big N as they deserve. So strap on your Plasma Beams and power up those Varia Suits because for the next week, we here at Nintendo Wire are going on a trip down memory lane through Metroid’s extensive 30-year history to explore what makes the series such an influential legend in the gaming industry — not to mention one of my favorite gaming franchises of all time.

For those who have never blasted a beam of ice in the face of floating brain leeches before, the series follows the adventures of bounty hunter Samus Aran and her many encounters with parasitic organisms known as Metroids, who more often than not are in constant threat of being experimented on and fashioned into biological weapons by Space Pirates: the Galactic Federation’s perennial enemies. The first installment in the series sets Samus on a solo mission to explore the planet Zebes in an attempt to locate the Space Pirates’ base of operations and destroy Mother Brain: a bio-mechanical lifeform that controls the Space Pirates’ fortress and its defenses. 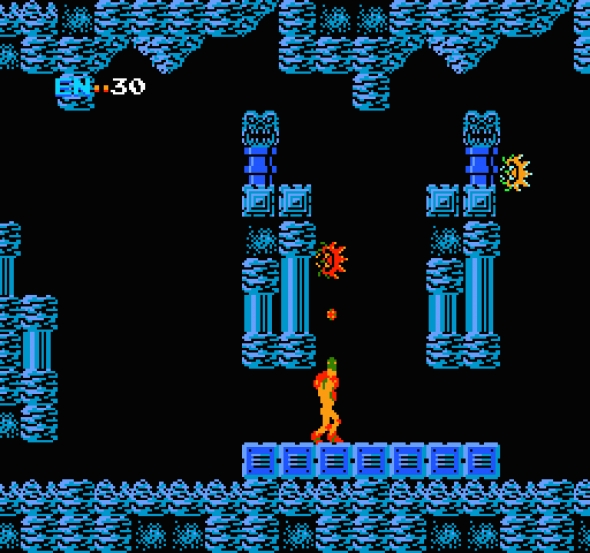 Few video games can say they helped pioneer an entire genre of games to come, yet that’s exactly what Metroid did for non-linear action platformers. Released in Japan 30 years ago to the day, Metroid masterfully combined the platforming mechanics that made Super Mario Bros. a worldwide success with the open-ended exploration and upgrade system reminiscent of The Legend of Zelda to create something entirely unique. While most platformers simply tasked the player with scrolling from left to right to reach the end of a stage, Metroid instead featured a sprawling, interconnected world that begged to be explored, often times requiring players to retrace their steps after earning new abilities and power-ups to progress: a staple mechanic that would define all future titles in the series. Remember, the entire concept of granting players permanent upgrades was not a standard mechanic back in the mid to late ‘80s either, with most games resorting to temporary, fleeting power-ups. Finding energy tanks to increase your HP or discovering the now-iconic Morph Ball or Screw Attack abilities were highly rewarding experiences that reflected Samus’s growth in power back onto the player’s own mastery of the game and its tight platforming control scheme.

Beyond its genre-defining gameplay, Metroid was actually a game of many firsts. It was one of the first video games to instill feelings of desperation and isolation upon the player, thanks in large part to its terrifyingly desolate atmosphere and ominous soundtrack: a theme no more apparent than during the first few moments of the opening credits:

Additionally, while the Japanese release saw a battery-powered save function for up to three files, the North American release received a password system new to the industry at the time. More importantly, though, it was one of the first games to have multiple endings, three of which featured Samus without her suit, revealing her to be — gasp! — a woman! Even today, this revelation is still considered to be one of the greatest video game surprises of all time, eschewing the damsel-in-distress trope most commonly associated with women in the industry and paving the way for strong and heroic female protagonists taking the spotlight.

While the term itself wouldn’t be coined until the release of Metroid Prime in 2002, the original Metroid is often given credit for introducing the concept of sequence breaking: the act of performing actions or obtaining items out of their intended linear order, therefore breaking the standard sequence of events in a game. For most video games, this is typically accomplished through exploiting glitches in the game’s design or code, though the Metroid series has a proud history of intentionally applying creative sequence-breaking opportunities in support of its nonlinear architecture. This is most notable in Super Metroid, where the developers fully embraced sequence breaking for the benefit of replayability. Essentially, what started as a simple design oversight ended up opening the floodgates for multiple ways to beat the game, with efficient sequence breaking proving a key asset for most speedrunners when shooting for some of its more elusive endings.

Of course, no reflection on Samus’s debut mission would be complete without mentioning its insistence on helping players brush up on their cartography skills. Some of you might be too young to have experienced this, but back in the days before Internet guides and online message boards, the original Metroid was virtually unbeatable without a pad of graph paper and your sharpest No. 2 pencil by your side. There are no in-game maps, tutorials or hints on where to go next, so having a firm grasp of your environment and surroundings was key in escaping Zebes alive.

Fun fact: did you know Metroid is a portmanteau of “Metro” and “Android”? The name was meant to be an allusion to Samus’s robot-like features and the game’s mostly underground setting. The More You Know!

Five long years would pass before players finally got a chance to go space spelunking with their bounty-hunting buddy Samus: a common time lapse Metroid fans would soon learn to accept and get comfortable with in the years to come. It was originally released for the Game Boy back in 1991, making it the first handheld installment in the series. Storywise, Samus reprises her role as a fearless bounty hunter, only this time sent on a mission to exterminate Metroids on their home planet SR388 before the antagonistic Space Pirates can get their grubby claws on them. Interestingly enough, despite chronologically being the second game in the series, it’s actually the sixth in the Metroid timeline, sitting pretty between Metroid Prime 3 and Super Metroid.

Despite relatively lackluster reviews, Metroid II was somewhat of a technological achievement back in its heyday, featuring graphics that were almost on par with what the 8-bit NES was pushing. The game also managed to build on the foundation of its predecessor in some new and interesting ways. For one, it provided Samus with much more maneuverability and versatility, including firing while crouched or straight down to attack enemies below her. Two new weapons — the spread-like Spazer Beam and the ultra-powerful Plasma Beam — were introduced, as well as the new Spider Ball ability, which allowed Samus to stick to walls. It was also the first game to introduce checkpoints for restoring health and missiles to make the difficulty significantly more accessible in comparison to its predecessor. This would later become a prominent feature in future titles.

The best achievements attributed to Metroid II are its ambitious premise and dark narrative that keep players second guessing their motives for the entire playthrough. Unique to other games in the series, the majority of your time is spent hunting the various incarnations of Metroids scattered throughout the planet, giving it a distinct survival horror feel (at least initially). This feeling is only further enhanced thanks to the tiny, claustrophobic screen of the Game Boy, adding to the suspense and tension of exploring a vast, uninhabited planet. As time passes, players slowly start to question their orders to commit mass genocide of an entire species with each deadly blow. Of course, this heartbreaking realization comes to fruition in full force once you finally take down the Queen Metroid only to witness a lone Metroid hatchling break out of its shell and imprint itself on our heroine, mistaking Samus for its mother. Ouch. Fortunately, Samus spares its life and brings it aboard her gunship, providing both an emotional and exciting setup for its masterful successor, Super Metroid.

Fun fact: due to the Game Boy’s limited grayscale display, the developers added round metal shoulders to Samus’s Varia Suit to differentiate it from her Power Suit. This updated suit has been a staple of the series ever since, appearing in all subsequent games!

That’s all for today, but be sure to come back tomorrow to learn all about the next two exciting entries in the franchise, where we’ll explore the subtle intricacies of what many consider to be the crowning jewels of the series: Super Metroid and Metroid Fusion.