Ken Griffey Jr.’s big day: A look back at his ties to Nintendo

Today in the small town of Cooperstown, New York, two baseball legends will be enshrined in baseball’s most prestigious museum: The National Baseball Hall of Fame. The first is catcher Mike Piazza, an underdog story in its purest form. The other is a player who not only is considered one of the greatest ballplayers of all time, but also a national icon. This, of course, is Seattle Mariner legend Ken Griffey Jr. You’re probably asking yourself: “Why am I reading about Major League Baseball on Nintendo Wire?” Well, besides belting 630 home runs, having 13 All-Star appearances and making outstanding catches nearly every day, Griffey was an absolute pop culture phenomenon. He was on cereal boxes, in commercials, and he was in the titles of plenty of Nintendo baseball games.

We’ll start with one of the strangest sports games ever made, Ken Griffey Jr. Presents Major League Baseball. The first Nintendo-published game in the Griffey “franchise” has a very interesting story behind it, as it was one of two competing SNES baseball games released in ‘94. One, MLBPA Baseball, featured all of the actual players from MLB, but none of the team names, uniforms, or stadiums. The game with Griffey’s name on the box included all of the stadiums and teams from the majors, but none of the actual players except Griffey! 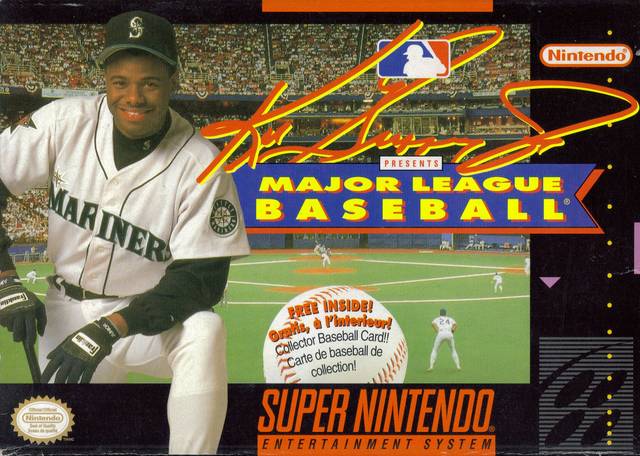 Due to various licensing agreements between the two developers and Major League Baseball, the true players and teams were split up, leading to two unique games. MLBPA Baseball had the real names of baseball players wearing blank jerseys playing in fictional stadiums, while Griffey’s game saw the real locations and logos with phony players. I really wonder how much, if anything, Griffey knows about the games that had his name on the box.

In 1995 the Seattle Mariners made their first playoff appearance in franchise history. All throughout the ‘95 season there had been talks of relocating the M’s to Florida. With just a month and a half to go in the season, the Mariners, led by Griffey and fellow Mariner greats Edgar Martinez and Randy Johnson, weren’t finished quite yet. Fueled by outfielder Jay Buhner’s tagline “Refuse to Lose,” the Mariners embarked upon a second half push for the record books, going 35-18 in their last 53 games. 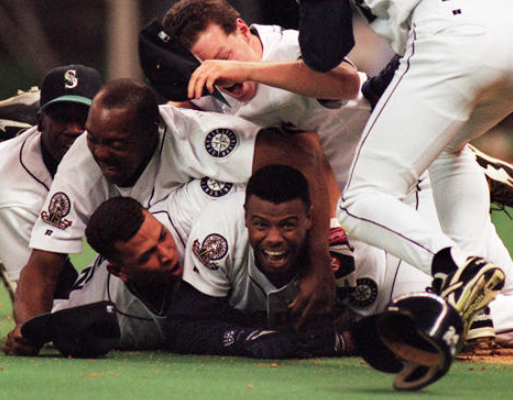 In the playoffs, Griffey was the center of a play that every Mariners fan knows by heart: “The Double.” In the bottom of the eleventh inning, Martinez laced a ball to left field, and Griffey raced all the way home from first to score and send the M’s to the next round of the playoffs. Dave Niehaus’ unforgettable call played on the airwaves all across the Pacific Northwest: “The throw to the plate will be late! And the Mariners are going to play for the American League championship!”

The next Griffey baseball game released was Ken Griffey Jr.’s Winning Run. The game was named after this sprint from first to home in the playoffs and also symbolizes the run the Mariners made from August 5th onward to make the playoffs for the first time in Seattle. Also worth noting is that Winning Run was developed for Nintendo by Rare, a studio based in Britain at the time who had just made Donkey Kong Country 2 and Killer Instinct for the system. 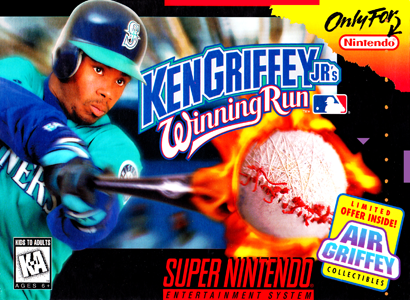 Very shortly after the 1995 season a new deal was made to build a new stadium in Seattle. The fan base was energized and the talks to move the Mariners had ceased. The new stadium, Safeco Field, will always be known as “the house that Griffey built.” Ken Griffey Jr. was the face of baseball throughout his entire tenure with the Mariners, with his name on the cover of nearly ten different baseball video games. Griffey was idolized by nearly every baseball fan, and today he will be granted baseball immortality in the Hall of Fame. The world will never forget the swagger, the smile, and that smooth, smooth swing.