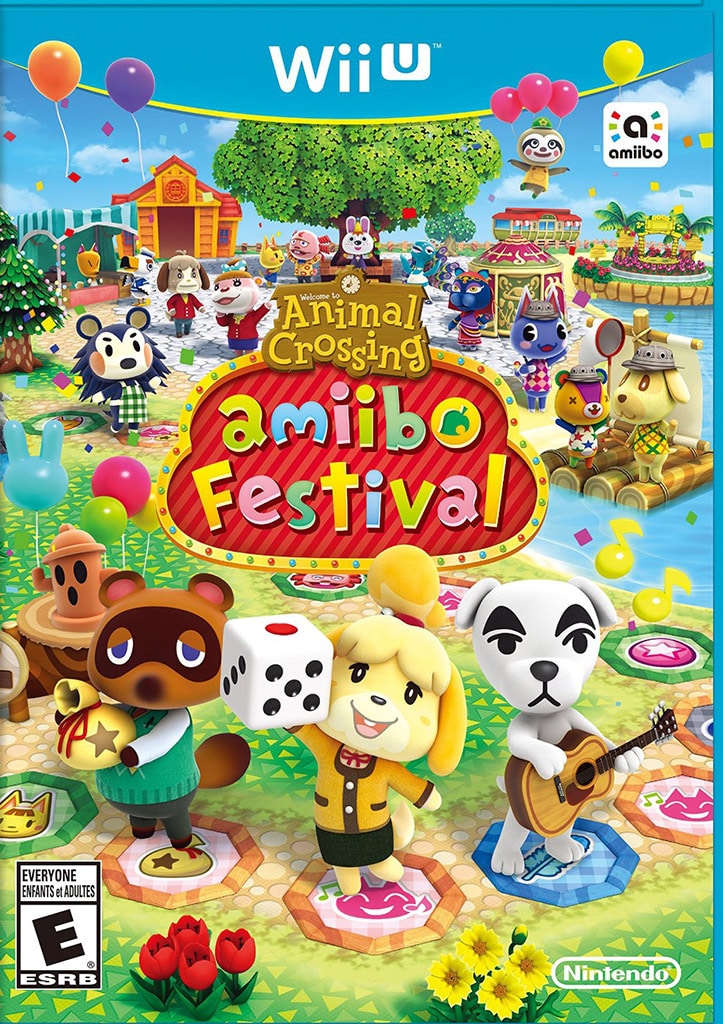 Since arriving on the Nintendo scene over 15 years ago, Animal Crossing has dug its way into the hearts of gamers worldwide. Taking on the role of a human living amongst anthropomorphic villagers of a variety of animal species, players are encouraged to collect, design, share and live out virtual lives in their ever-changing little town. After making appearances on the GameCube, Nintendo DS and Nintendo 3DS, the popular community simulator has finally come to the Wii U– just not how you’d expect. Animal Crossing: amiibo Festival takes the cutesy charm of the series and blankets it over a hollow and uninteresting party game, which banks its presumed success heavily on already-established fans of the franchise.

When you first load up a copy of amiibo Festival, you’re hit with a screen requiring you to scan an Animal Crossing series amiibo to begin. Fortunately, the game comes bundled with two already: brother and sister pair Isabelle and Digby of Animal Crossing: New Leaf fame. Once you’ve scanned your amiibo and selected a character to play with, you’ll be introduced to the true “meat” (by which I mean a thinly-sliced piece of bologna) of the title: the Board Game.

Players spend 31 turns (or less, depending on the month you’ve selected, or if you’ve set a time limit) circling a board modeled after a traditional looking Animal Crossing village, landing on spaces that take them into storybook peeks into a day-in-the-life of their character. Each turn is a day in the tiny board game town, with players experiencing an entire in-game month of their choice over the course of the playthrough. The goal of the game is simple: to collect as many “Happy Points” as possible, which are earned (and lost) by landing on certain spaces. Bells, the currency in the Animal Crossing universe, are also important, allowing players to purchase and use cards from special visitors and gain additional Happy Points at the end of each game. Additionally, another element is tossed into the mix: turnip trading. Like in Animal Crossing’s main series titles, players can purchase turnips from the character Joan and sell them depending on market trends (in layman’s terms, buy low and sell high), which adds a surprisingly fun touch to what is otherwise a snoozefest. Unlike other Nintendo party titles, there are no minigames– nothing to occupy players between rolls and board movement. Amiibo Festival’s main mode plays like a stripped down version of Mario Party and there isn’t anything the cuteness of the setting and characters can do to make up for it.

While the board game is entertaining at first, players may find themselves growing tired after repeated playthoughs. Alternative modes unlocked with “Happy Tickets” can be more engaging, but there aren’t many and most aren’t any different than the minigame offerings you’ll find in Mario Party 10 or Wii Party U. Quiz Show is a mode with a name that’s self-explanatory; however, questions in the game are limited to Animal Crossing trivia, which may prove unenjoyable for people unfamiliar with the series. The mode also perfectly illustrates the game’s dependence on series fans: one of amiibo Festival’s many shortcomings.

Desert Island Escape, probably the best of the game’s few modes, invites players to place three villagers on a deserted island through amiibo cards, where they’re forced to survive, craft tools and find food while searching for materials to build a raft and sail away. The gameplay of Desert Island Escape is definitely deeper than the main mode, requiring at least some level of strategy. There are also three difficulty modes to choose from and special abilities that differ between each villager species. During my plays of amiibo Festival, I found my time with Desert Island Escape a definite highlight-– a favorite of mine and my friends.

To top off the substandard gameplay of most of amiibo Festival’s modes is the downright irritating requirement of scanning amiibo or amiibo cards every time players make a move. If you’re anything like me, you likely have a probably-unhealthy (okay, definitely unhealthy) obsession with Nintendo’s line of toys-to-life figurines. As much as I love my amiibo and appreciate Nintendo’s attempts to integrate them further into compatible games, I have to question who thought it would be fun for players to have to constantly reach for their figures as they play. It’s annoying, it’s unintuitive, and after suffering through it in Mario Party 10’s amiibo Party mode, I had hoped we were done with it for good.

Everything considered, the game is plagued with a lack of challenge and– at best– a minimal sense of competition. The allure of a feel-good romp may be lost on players who are looking for a fiercer party game. Instead, Animal Crossing: amiibo Festival might be better suited for younger children who will appreciate its laid-back play style and absence of difficulty.

While not imperative in a party title, it’s always nice when a game looks good. Animal Crossing has never been a graphics intensive series and amiibo Festival is no different, but seeing my favorite villagers in bright, vibrant HD was definitely a plus. However, experiencing Animal Crossing in high definition only made me hungrier for a true Wii U installment in the series. Fortunately, the existence of amiibo Festival and all its assets may be a hint that a home console version of Animal Crossing is already in the works.

Like most of the game, amiibo Festival’s music is nothing special or memorable and, while all the charm of the series is present otherwise, it almost feels as though the title’s soundtrack was an afterthought to developers. Tracks are forgettable and typical of party games instead of the delightful songs of games past.

Animal Crossing: amiibo Festival is a disappointment, but not an unexpected one. While I found its 3DS counterpart, Happy Home Designer, surprisingly rich in gameplay, amiibo Festival simply feels like a cash grab that capitalizes on the success of amiibo and the love fans have for the series. To me, Animal Crossing doesn’t seem like a franchise that lends itself well to the party game genre, and it definitely shows in the lack of depth amiibo Festival has. Ailed by an annoying control gimmick, wasted potential and numerous, tedious game modes, this title is one you’ll pick up once or twice and probably never touch again. Other fans of Animal Crossing may find appeal in amiibo Festival’s charm, but personally, I find that just isn’t enough.

But, hey, at least you’ll get some cool Animal Crossing amiibo out of it.