A history of Nintendo crossovers

Crossovers. Why do we like them so much? Whether we’re watching the latest superhero team-up blockbuster on screen or laying the smack down on beloved pop culture mascots in whatever new “versus” game Capcom concocts, the crossing over of one property with another is almost always a recipe for instant excitement.

Because if one cool thing is good, then two cool things are great, right? It’s as simple as that.

Nintendo, with its roster of iconic games and characters that have become hallmarks of the industry, would seem to be in a prime position to capitalize on crossover appeal. And indeed, Nintendo has a long history of its characters popping up in such games, dating back all the way to the original Nintendo Entertainment System, if you can believe that.

Sometimes hot and sometimes cold but always interesting, this is the story of Nintendo’s many and varied crossover projects.

Our story begins in 1989, with the release of the smash hit Tetris on the NES. Players who cleared the B-game were treated to a special 8-bit concert featuring the Mario Brothers, Donkey Kong, Link, Samus and even Pit. While it was a far cry from the smashing spectacles this motley crew would be involved in later on, it was still a cute little cameo from a cast of beloved characters.

Cameos like this would be par for the course when it came to crossovers on the NES and its successor. Punch-Out!! in 1987 saw two crossover appearances: Mario, the main man himself, stepped in to handle the officiating duties between the ropes, and the real world baddest man on the planet, Mike Tyson, was the final boss. Super Mario RPG, released for the Super NES in 1996, allowed Mario to meet up with Link and Samus, who were both apparently resting up for their own adventures. Samus would also show up in Kirby’s Dream Land 3 in 1997, where she enlisted the pink puffball’s help in eliminating Metroids. 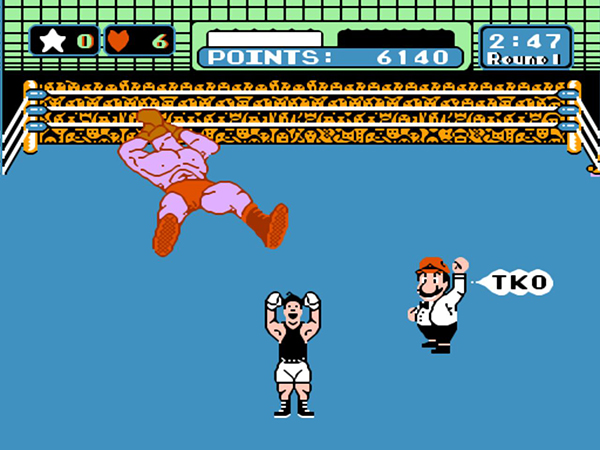 Not to be outdone, Nintendo’s first handheld gaming platform, the Game Boy, had at least two notable crossover appearances. In 1993’s The Legend of Zelda: Link’s Awakening, Link actually receives a helping hand from none other than Wart, the main villain of Super Mario Bros. 2, not to mention the woman who tasks Link with taking her Chain Chomp for a walk. A year later, the Game Boy played host to one of the first cross-company crossovers with the release of Wario Blast: Featuring Bomberman! As the title implies, the game allowed players to pit Nintendo’s own oddly endearing glutton, Wario, against Hudson’s Bomberman.

The N64 didn’t see a whole lot in the way of large-scale crossovers from Nintendo, but there were two games of note that you might have heard of: The Legend of Zelda: Ocarina of Time and Super Smash Bros. In 1998, Ocarina of Time continued the trend of the casual cameo, as eagle-eyed players were able to spot a few conveniently placed portraits of Mario characters hanging on the walls inside Hyrule Castle.

Jokes aside, I doubt I even need to mention Super Smash Bros. Released in 1999, it was among the first large-scale crossover fighting games (Capcom beat Nintendo to the punch in being the first) and featured appearances from Super Mario, The Legend of Zelda, Donkey Kong, Metroid, Star Fox, Yoshi, Kirby, Pokémon, EarthBound and F-Zero. 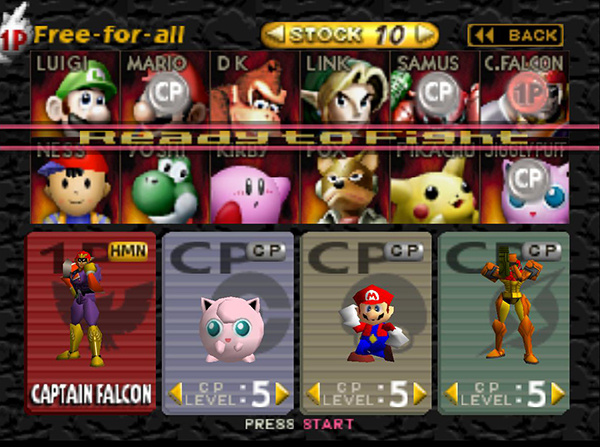 Speaking of F-Zero, that series’ second installment, F-Zero X, was released for the N64 in 1998 and added dozens of new characters to the roster. One of those new additions was James McCloud, head of the mercenary unit Galaxy Dog. While not a true crossover, it was an obvious allusion to the Star Fox character of the same name. Diddy Kong Racing in 1997 also included Banjo and Conker as playable racers, though this was before either character had their own starring roles.

It was in the early 2000s that things started getting really interesting on the crossover front. This era in gaming saw a three way console war between the Nintendo GameCube, Sony PlayStation 2 and Microsoft Xbox. While exclusive games were the main ammo for each side, multiplatform games were also an intriguing front as each company did its darnedest to ensure their version was the best. In Nintendo’s case, this often boiled down to exclusive crossover content.

Probably the most famous example of this was Soulcalibur II in 2003. Each console version contained a special exclusive guest character. The GCN version proved itself arguably the most popular with fans and critics alike by featuring Nintendo’s own Link, complete with his full arsenal of bombs, bow and boomerang, as a playable fighter. I can tell you from personal experience that he was a blast to play and more than enough to pique the interest of a casual fan. 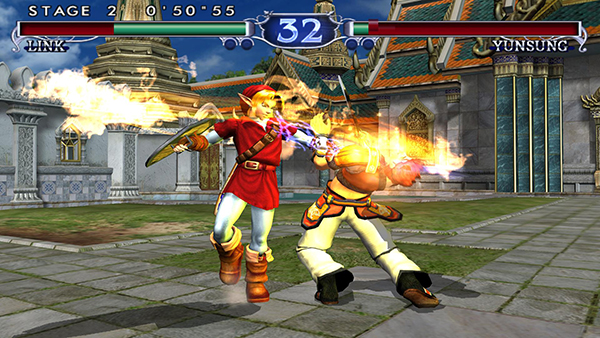 Soulcalibur was far from a unique case, though. Video game developer and publisher EA Sports struck a deal with Nintendo, and 2005 saw a trio of sports games boasting some unusual guest stars. Fight Night Round 2 on GameCube actual included the SNES game Super Punch-Out!! And if the player successfully beat the game, they could as play as Little Mac himself and duke it out against boxing greats like Muhammad Ali and Manny Pacquiao. NBA Street V3 and SSX on Tour saw Mario, Luigi and Peach moonlight as pro basketball players and snowboarders/skiers, respectively.

Though it wasn’t a GameCube title, 2005 also saw the release of Mario Kart Arcade GP. This iteration of the trailblazing, kart-racing, eyebrow-raising series was developed by Namco and featured a handful of Pac-Man, Ms. Pac-Man, and the ghost Blinky as playable characters.

See? Four paragraphs, and I didn’t even have to mention Super Smash Bros.

In the following console generation, Nintendo’s Wii system outpaced its competitors in terms of sales, which meant Nintendo didn’t have to lean on enticing exclusive content in multiplatform titles anymore. But that couldn’t fully stop the crossover train that had really got rolling.

Punch-Out!! was once again a main stop for said train, as the 2009 revival added a familiar tie-wearing gorilla as a hidden opponent (spoilers: it’s Donkey Kong). Little Mac himself also made another guest appearance, this time as a part of the bizarre 2008 Japan-only game Captain Rainbow alongside other Nintendo characters, such as Birdo and Takamaru. In 2010, Takamaru would appear again in Samurai Warriors 3.

Not to be outdone, Mario got involved in more crossover titles as well. Taking the skills he’d picked up in NBA Street to the next level, 2006’s Mario Hoops 3-on-3 had the Mushroom Kingdom crew throwing down against a team of interlopers from the Final Fantasy series, igniting a rivalry that would simmer for four years until the release of Mario Sports Mix. Yes, the sports bug had truly bitten Mario hard. In 2007, gaming’s greatest rivalry finally took center stage as Jumpman and the Blue Blur finally went head-to-head in Mario & Sonic at the Olympic Games, a series that is still going strong today. 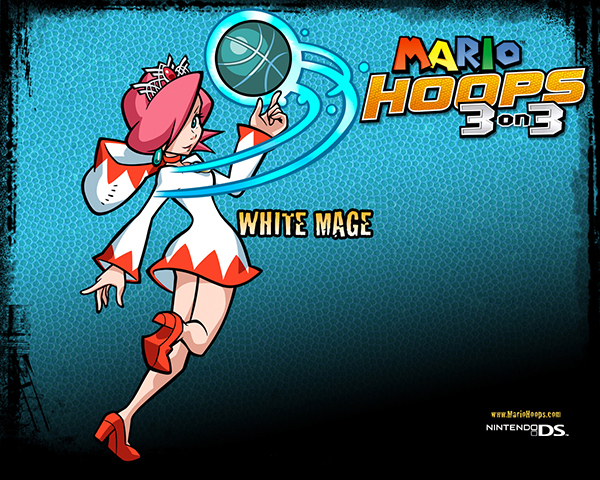 This console generation also saw a few really strange, but still fun, crossovers. The twenty-year-old Fortune Street series made its North American debut in 2011 with a title that saw the Mario gang go head-to-head with characters from Dragon Quest in a board game about buying up properties and earning coins. But if a game about Wario and Slime playing Monopoly just wasn’t “out there” enough for you, Nintendo and Tecmo Koei had just the thing for you with the 2012 release of Pokémon Conquest, a crossover between Nintendo’s addictive gotta-catch-’em-all games and the historical grand strategy RPG series Nobunaga’s Ambition. Hey, whatever works, right?

And that brings us to today, wherever the marketing appeal of crossovers is now more present than ever. Right out of the gate, Dead or Alive: Dimensions, released in 2011 during the 3DS’ launch window, included a stage based on Metroid: Other M, plus a cameo from Samus Aran herself. Scribblenauts Unlimited, the puzzle-solving game that allowed players to spawn nearly any object they could think, released in 2012 on the Wii U and 3DS and featured cameos from the Super Mario and Zelda series in the form of characters and objects the player could spawn.

The iconic nature of Nintendo’s characters is on full display with the string of third-party games that feature special Nintendo-themed costumes as bonus content. Monster Hunter 4, released in 2014 for the 3DS, offers Mario and Zelda themed items as downloadable content. Tekken Tag Tournament 2, a 2012 Wii U launch title, gave every one of the more than 60 characters a costume based on Mario, Zelda, Metroid, F-Zero or Star Fox. Similarly, Bayonetta 2 in 2014 included a suite of Nintendo costumes that granted the titular heroine new abilities, from Samus’ arm cannon to her very own Arwing. 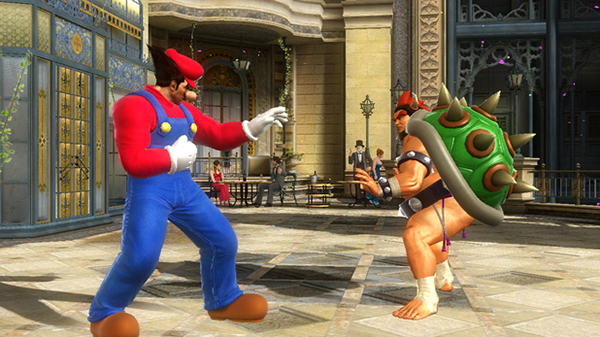 Third-party developers aren’t the only ones making use of Nintendo’s crossover appeal. No, the Big N is more than capable of doing that itself, as shown by Mario Kart 8 in 2014. Players who purchase the game’s DLC can play as Isabelle and the Villager of Animal Crossing fame, or put the Hero of Time himself behind the wheel. Plus, they can race on tracks inspired by Animal Crossing, Zelda, Excitebike and F-Zero. And this is just the tip of the iceberg, as Nintendo is poised to dive into even more crossover projects. The game formerly known as Shin Megami Tensei X Fire Emblem is due to launch sometime next year, as well as Mario & Luigi: Paper Jam, which aims to unite the worlds of Paper Mario and Mario & Luigi.

On top of that, Nintendo’s foray into the world of toys-to-life has opened up countless new doors for potential crossovers. Amiibo can already be used to unlock special costumes and items in games like Yoshi’s Woolly World and Ace Combat: Assault Horizon Legacy Plus, and Japan-only games like One Piece: Super Grand Battle! X, and can even unlock Fire Emblem characters on Code Name: S.T.E.A.M.

But perhaps the most intriguing, and certainly the most meta Nintendo crossover on the horizon is the upcoming Activision game Skylanders: SuperChargers. The original toys-to-life game, now entering its fifth installment, is the setup for a double crossover. First and foremost, Nintendo’s Donkey Kong and Bowser will be playable characters in the game. On top of that, however, are the DK and Bowser figures, which are not just ordinary Skylander figures, but can also be used as amiibo. It’s a very exciting new direction that creates a lot of wild new crossover possibilities, possibilities that aren’t even necessarily video games themselves! 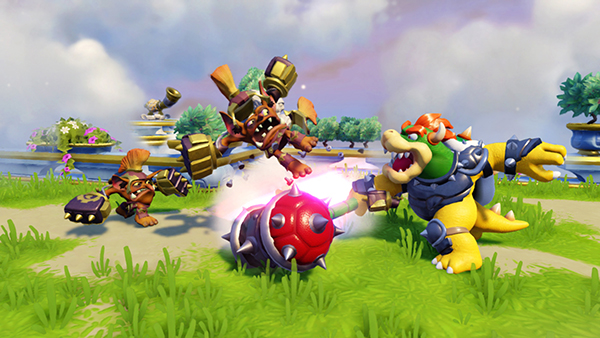 Yes, crossovers are almost always an exciting proposition guaranteed to turn consumers’ heads. They have the power to make someone who’s never even picked up a basketball take an interest in the NBA, or just get fans to wonder how Samus landed her ship in the Mushroom Kingdom. Maybe the real crossover appeal here is how they can be an exciting possibility from both the fan’s side and the financial side.

Whatever the case, it sure makes that 8-bit Tetris Concert look awfully quaint, huh?