The History of Nintendo Competitions: Part 2

Like all great sports, Nintendo decided that it needed to have a college division to go along with its World Championships. Enter: the Nintendo Campus Challenge. Nintendo held two of these competitions in 1991 and 1992 at college campuses all over the U.S.

The Nintendo Campus Challenge 1991 was held at over 50 college campuses in the U.S., plus a handful of locations in Canada and three spring break destinations. It was the last NES competition Nintendo would do (unless you count this year’s event). The competition started in early 1991 and took place throughout pretty much the entire year, with the finals being held at Walt Disney World in Orlando, Florida on January 4th, 1992. The grand prize was a Geo Storm GSi. (For all you younger readers, that’s a car.)

The game itself actually closely represented this year’s Nintendo World Championships, as two of the three games were the same: Super Mario Bros. 3 and Dr. Mario. The third game? Sandwiched in the middle was Pin•Bot. Players had the requisite six minutes and twenty-one seconds to get the highest scores possible in the games, but oddly enough, the strategy that event was not to get to Dr. Mario as fast as possible; it was to score leech in SMB3. The game didn’t move on until players collected 50 coins, but it multiplied their scores by 10. So the optimal strategy was to respawn the three Koopa Troopas right after the first pit, and kill them over and over again, while leaving just enough time to get the requisite 100,000 points in Pin•Bot to move onto Dr. Mario. (The game wouldn’t tabulate their scores unless they started Dr. Mario.) 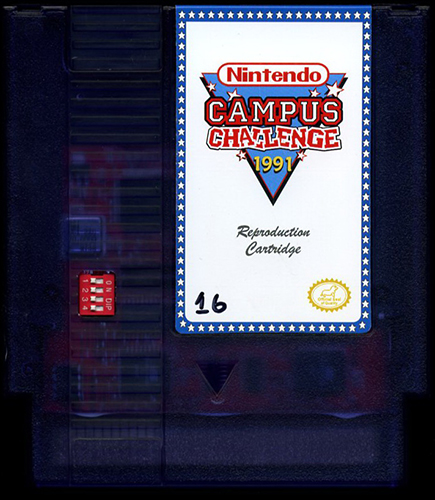 “Campus Challenge 1991 Reproduction Cartridge.” Source: Nintendo Age.
Only one copy of this game is known to exist. It was purchased for an undisclosed (but almost certainly dirt cheap) price from a former Nintendo employee’s garage sale in 2006. The buyer sold it to someone else for $14,000, who in turn sold it on eBay for $20,100. That was in 2009. Given the fever pitch surrounding the vintage gaming scene now, one can only imagine what that cart would sell for if sold today. Fortunately, reproductions of it are available for folks who really want to test their mettle against the Campus Challenge.

When Nintendo Campus Challenge 1992 came around, Nintendo was in full attack mode with the SNES, which had just hit North America in August of 1991. SEGA had a head start by two years in North America with its Genesis, which was quickly becoming more and more appealing to older kids and college students with the company’s, ahem, “edgy” marketing. (Nintendo would later counter this with its “Play It Loud!” ad campaign, which is notable for using a Butthole Surfers song to sell Donkey Kong Country and Super Metroid. That, however, is a story for another day.)

The natural solution? Campus Challenge 1992! Just check out this announcement video, sent to colleges encouraging them to participate.

This time, only 35 universities participated (which I find odd, as I remember video games being even hotter with the advent of the 16-bit war). The field was divided into male and female, and each gender received the same prizes. The winner at each campus got a SNES with copies of each game contained in the competition. The grand prize was $10,000, which, in a stunning anti-climax, was determined via random drawing of all the campus winners.

The game this time included Super Mario World, F-Zero and Pilotwings. Players had– you guessed it– six minutes and twenty-one seconds to get 50 coins in Super Mario World, make two laps around Mute City 1 in F-Zero, and do as many parachute and high dive jumps in Pilotwings as remaining time allows. This setup brings us back to the classic model of “speed through the early games as fast as possible to rack up points in the last game.” In Pilotwings, players alternated between parachute jumps and high dive jumps, with each getting harder. Still, this was where a skilled player received the most points.

There are allegedly three copies of Campus Challenge 1992 in existence, though the whereabouts of only two are known. One of which was purchased at the same garage sale as the only known copy of Campus Challenge 1991. The only sale of which the details are known happened in 2006 and was for $4,000. In the intervening nine years, the price of vintage games of all stripes, but especially SNES games, has gone through the roof. There is little doubt that if this ever showed up in an open market, it would easily fetch five figures.

That closes the book on the competitions that were set up by Nintendo itself. Next week we’ll have a look at two competitions put together by the fallen king of video rental. You might even learn a little about *gasp* the Sega Genesis?!