Ten years ago, Xenoblade Chronicles released in the Americas, a majestic masterpiece that broke new ground in scale, atmosphere, and worldbuilding, providing foundation (along with oft-forgotten spinoff sequel Xenoblade Chronicles X) for Monolith Soft to help craft the environment for The Legend of Zelda: Breath of the Wild and change the landscape of gaming forever. Xenoblade Chronicles 2, released the same year as BOTW, was… less stellar. While not bereft of good qualities, a combination of asinine humor, needless gacha, tonal inconsistency, and other hiccups left it lacking. While I initially scored the game highly upon reviewing it in 2017, my opinion soured greatly over the past five years, especially after the Definitive Edition of Xenoblade 1 reminded me of all I loved about it that was absent in 2. So when the third entry in the series was announced as a theoretical mashup of these first two games… I was excited, yes, but also deeply, hopelessly afraid. 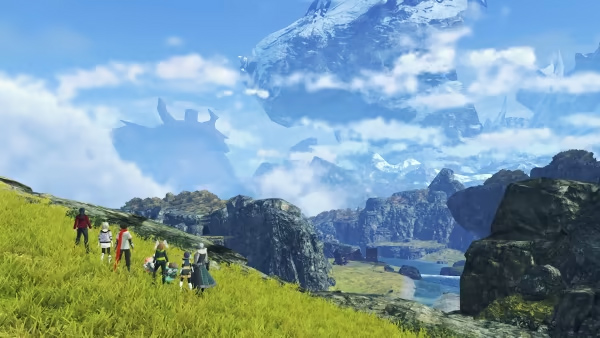 Xenoblade 1 was a sorrowful game, not devoid of humor, but largely thoughtful and serious, a dyed in the wool epic that gave weight to its world and characters. 2, on the other hand, was a lot wackier, conveying an adventure that involved maid robots, an oppressed underclass struggling against god, and many voluptuous sword women somehow in equal accord (and in hindsight, it did not work). Combining these two flavors would be like dumping Cold Stone ice cream into squid ink spaghetti. How would this work? Could I even have hope that it would come out palatable, let alone delicious? Even as the trailers rolled out and there wasn’t even a hint of Anime BS, I worried. And worried. And worried. Sure that it was all a ploy and we’d end up with another Xeno game that’s good but a mixed bag.

I’ve never been so happy to be wrong.

Xenoblade Chronicles 3 doesn’t so much meld 1 and 2 wholecloth but take the ingredients of both and whip them into something mesmerizing. By not only bringing back what made 1 specifically a masterpiece – the care put into its world, the gravitas of its tone, the weightiness of its themes – but fixing flawed ideas from 2 to provide a new entry to the series that is everything one could hope for, carrying on its traditions while carving a new path. 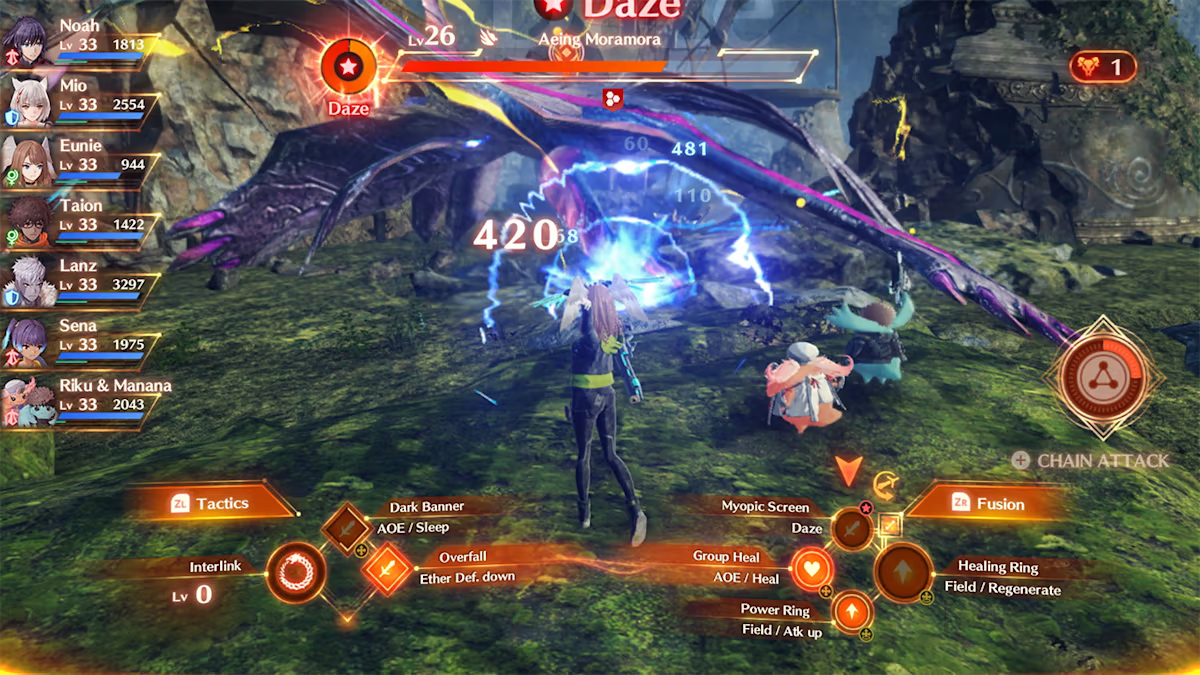 XBC3 follows two trios of special ops soldiers – Noah, Lanz, and Eunie from Keves, a nation with technology reminiscent of XBC1, and Mio, Taion, and Sena from Agnus, a nation with technology reminiscent of XBC2. Keves and Agnus have been warring for as long as memory serves, and in a world where lifespans only last ten years (or “terms,” as the game calls them), war is all the people know – born and trained to be soldiers in order to kill enemies from the opposing side and take their life force for their Flame Clocks (a necessity akin to food or water). Noah and Mio’s teams initially fight on a special mission, but, via a twist of fate, end up breaking free of the Flame Clocks and are marked as enemies by the nations they call home. Left with no other choice but to team up with who they just fought against, the six (and their Nopon buddies Riku and Manana) set off for the land known as Swordmarche, which contains the secrets behind the world’s conflict.

This surprisingly natural mashup of the first two games’ premises provides solid foundation for the characters to shine. And boy do they shine! The cast of 1 was charming, but could occasionally lack in chemistry due to only half of them being very involved in the story. The cast of 2 had more of a rapport, but in turn some of the characters outright sucked (looking at you, Tora). 3 hits the sweet spot, making each character loveable and sympathetic while also building their relationships. Whether it’s the crass, extremely British Eunie’s banter with the nerdy, reserved Taion, or the bubbly, muscle-headed Sena’s workout partnership with the burly yet troubled Lanz, or even Noah and Mio’s core dynamic that has already conveyed poignancy and care. And beyond even these clearly romantic setups the other relationships are fleshed out – Noah and Taion have similar dispositions, Mio and Sena are gal pals, and so on. Riku and Manana also help provide some genuinely good comic relief, finally adding Nopon to the series who can hold a candle to Riki’s greatness. While there are no Heart-to-Hearts (at least 40 hours in, so I doubt they’ll suddenly appear) which is slightly disappointing, the general increased amount of inter-party dialogue helps alleviate their absence. 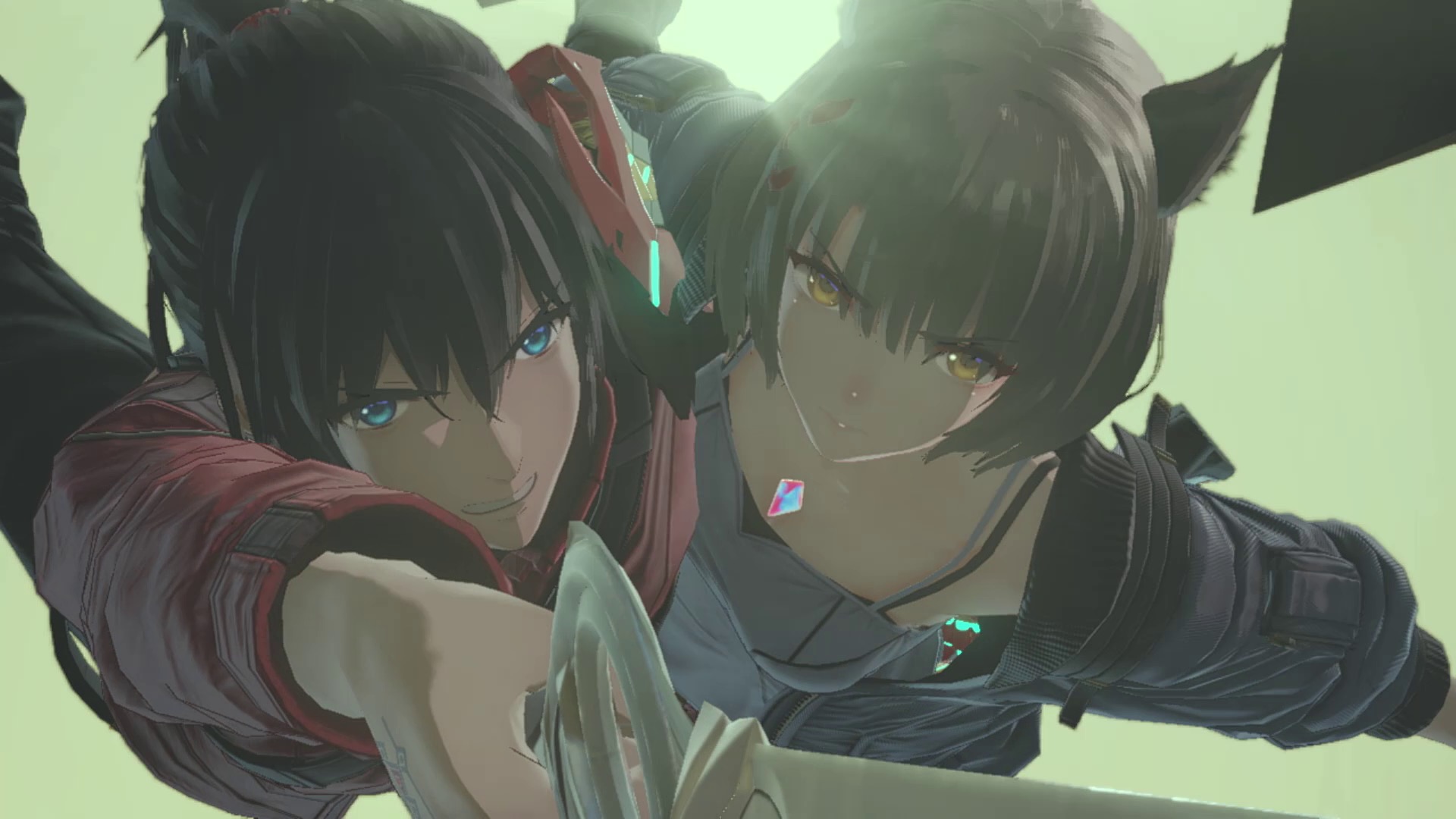 In that same vein, the party is a bit more involved with sidequests than in previous games. Instead of wordlessly getting tasks or repeating the same stock phrases, characters will pitch in with a line or two when getting info, and it helps to establish them in the world – one of the strongest core attributes of the whole series. Toss in a smattering of great side characters like the honorable Silvercoat Ethel and the return of my beloved and irreplaceable Affinity Chart (which tracks the complex web of relationships between named NPCs) and once again the world of Xenoblade feels rich with intricacies.

And what are good heroes without good villains? The shadowy consuls who oppose Noah, Mio, and co. still have unclear motivation, but make up for it with gloriously hammy personalities and unabashed pure evil. While I have no doubt that the game will provide more wrinkles as it goes along, at the moment all the bad guys drip with pure, delicious malevolence, making them simultaneously entertaining and threatening, accentuated by the character designs (done by a different artist than the rest of the cast) standing out so much.

Speaking of character designs – this game looks GOOD. Like, did you see the designs in 2? They were all so disjointed and messy. Even the serviceable ones had a hiccup or two. Here, everyone looks great. The jacket-focused couture provides a nice aesthetic tie in with the class system (more on that in a bit). But in general the designs are tasteful, appealing, and well-made. To say nothing of the environments. The day Monolith Soft makes a game where the world isn’t beautiful is the day I eat a hat. While a bit smaller area by area (and so far, less fantastical) than previous games, the various biomes you traverse through maintain the Monolith magic – grand in scale, carved with intricate thought, unimaginably enticing. 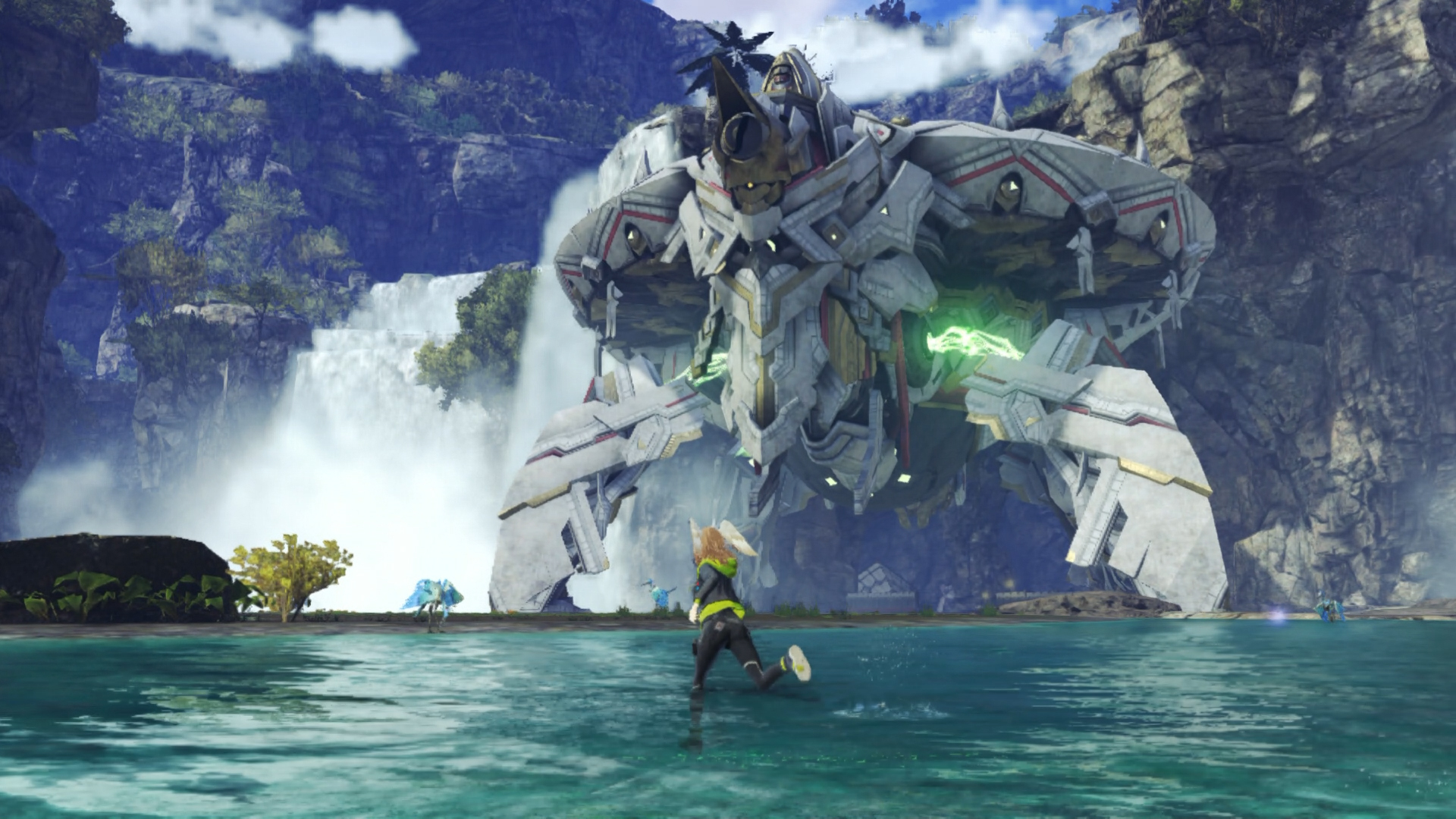 And of course, the game not only looks great but sounds great. The Xenoblade soundtrack regulars are all here: ACE, Kenji Hiramatsu, Minami Kiyota, and the legendary Yasunori Mitsuda all make their return after 2, and 3 is even better than their stellar work there, bolstered by an incredibly striking flute motif tied to Noah and Mio’s roles as off-seers, mourners who play melodies for the dead to rest (the haunting lilt of their melody is already ingrained in my consciousness). Everything from the main battle theme to the new rendition of You Will Know Our Names goes as hard as it possibly could, and I’m stunned by how much basic battle music could pass for a final boss theme. And the voice acting is as Xenoblade as ever – veering between masterfully fitting and lovably campy. I already have post-battle quotes on repeat in my mind (“You see me in action, Mimi?” “Sure I did Sena! You looked GREAT!” sticks out to me for assuredly non-lesbian reasons)

And, of course, there’s the battles. True to marketing, the battle system is a unique mashup of 1 and 2’s intricacies with its own added flavors. Having all six party members out at once is definitely a standout feature, especially with the ability to finally swap characters in the midst of battle. Chain attacks have evolved into a careful dance of mathematics and luck depending on characters’ roles. And the brand new Class system makes up the bulk of the game’s new customization and particulars, your party members able to swap their roles (with varying adaptability) as you see fit. While I have yet to unlock every ounce of depth (and I need more time to flesh out my thoughts on the Ouroboros mechanics) so far it’s as fast, fluid, and fun a combat system as one could hope for. 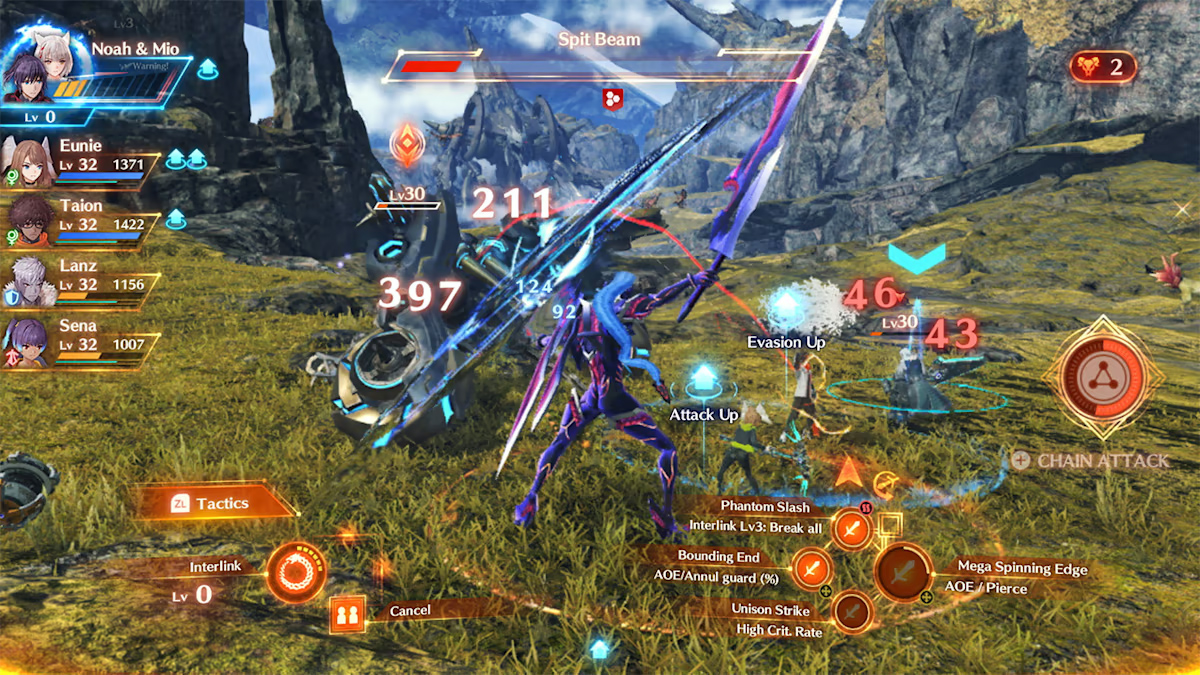 You get new Classes from Heroes – seventh party members obtained usually through side quests (that are often so involved they could be main story quests). Heroes feel like what Blades from 2 should have been – you don’t have to worry about gacha to obtain them, they have varied and fleshed out personalities, and you can eventually utilize their powers for your own purposes. What’s more, their designs feel generally congruous this time, thanks to all of them sharing a character designer (Masatsugu Saito). While inheriting the classes from Heroes can be a bit nebulous (which I may or may not dive into more next time depending on mood) so far it’s been a lot of fun experimenting.

If there are any complaints so far, they’re all minute. The game has a bit of an unevenly paced start, with huge smatterings of story and gameplay before it takes a while to properly open up. While it brings back good feelings of playing 1 (I feel like a 15 year old again), it’s more of an evolution than a total mold breaker than that game was. And I have a worry that the game is gonna bring in the past games in a wonky way, given that Melia and Nia (whom I both love deeply) appear involved in the plot. I won’t mind connections to the past games (or at least to 1, if I’m being honest) but I hope the spotlight of 3’s main cast isn’t stolen, because I truly adore them.

There’s still an absurd amount of Xenoblade Chronicles 3 left to play, and it feels like I’ve just scratched the surface. Surely my thoughts on the intricacies of the story or mechanics will evolve as I go, but my initial thoughts on the game are exceedingly positive. Reigning in their more sophomoric proclivities and returning to the original weightiness of the series, arguably going even grimmer in its interrogation of life and death, Monolith Soft has once again demonstrated their one of a kind ability to craft grand epics in breathtaking worlds. There’s no other series like Xenoblade Chronicles out there, and it lightens my heart to know that once again I mean that in an entirely positive light.