There are plenty of parallels to be drawn between the Nintendo Switch and the Nintendo Wii: Both systems broke into the mainstream with immense popularity, appeal to all ages, support motion controls, and are an absolute blast when playing with others. As amazing as the Switch is, however, it still feels as though it’s lacking something the Wii had: the definitive party game.

When I say “party game,” I’m not talking about your regular multiplayer game. The Switch has plenty of those, with Super Smash Bros. Ultimate, Mario Kart 8 Deluxe, Splatoon 2, Rocket League, and Super Bomberman R. Of course, you could put any of those titles on at a party and have a great time, but the party genre is generally considered to be a little more specific: games that are approachable to everyone, are entertaining to spectators, and emphasize winning a series of minigames rather than throwing players into long, singular bouts. 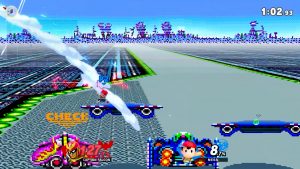 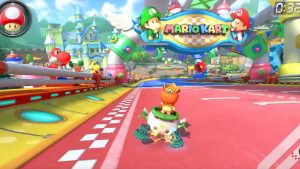 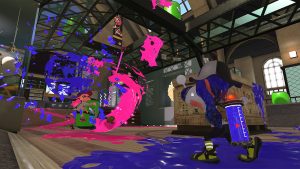 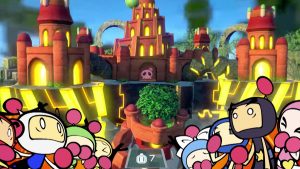 That’s not to say a minigame-focused party title hasn’t been done on Nintendo’s latest console. There have been some games that fit the party category with varying levels of critical success, but the Switch still has a hole to fill. It’s a big, wide, garlic-scented hole with a devious laugh echoing from within.

WarioWare is a series that throws a series of “microgames” at players, which are shorter and simpler than typical video game minigames. These generally last around five seconds or less and are presented to players in a fast-paced fashion, gradually becoming shorter and more complicated and eliminating players that fail four times. Not only are reaction times tested, but instructions for each microgame usually come in the form of a single verb, introducing the challenge of trying to decipher exactly what to do in the incredibly short amount of time given. 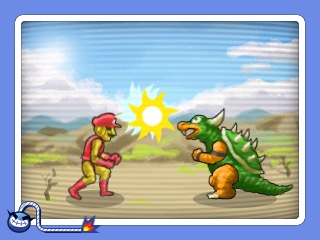 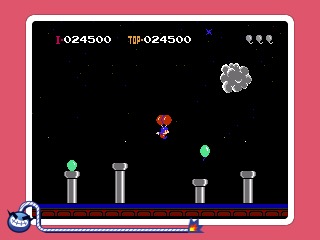 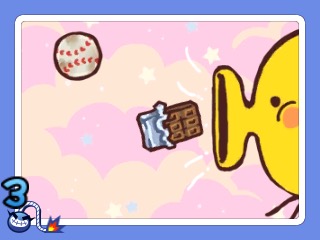 That’s the beauty of WarioWare. It doesn’t need to waste anyone’s time with a rulebook or tutorial in order for you to understand how to play; you can simply hand over a controller to a participant and tell them to follow the commands onscreen. It’s one of those rare series that can actually be more fun the less prepared you are going into it.

The concept is hilarious and approachable to absolutely anyone vaguely interested in having some multiplayer fun, regardless of their prior experience with video games (or lack thereof). The WarioWare brand has a great track record of attracting a wide audience, and with the Switch already having a massive install base, a new game would undoubtedly hook a diverse range of players once more.

1-2-Switch and Super Mario Party adequately demonstrated the full range of the Joy-Cons’ capabilities, but both lacked replayability with the former feeling like a tech demo and the latter suffering from a lack of content. Contrastingly, The Jackbox Party Pack and Clubhouse Games: 51 Worldwide Classics are extremely enjoyable, but don’t offer anything that other, Switch-competing consoles can’t do. The Switch needs a party game that gets the balance right: something that provides that unbridled fun along with an experience that isn’t possible on any other console. Wario is the only man for such a job.

WarioWare has a history of making full use of Nintendo’s hardware with great success. The series single-handedly demonstrated just about everything the Wii, DS, and 3DS could do, demanding players use touchscreens, microphones, motion controls, gyro controls, and more to barrel their way through the bizarre microgames. The series has had handheld players shift from touching, twisting, blowing, and button-mashing, while demanding Wii players hold and interact with the Wii Remote in a large variety of imaginative ways.

It’s been 14 years since that latter title, Smooth Moves, launched on Nintendo Wii. Since then, Snapped and D.I.Y. released as fun, gimmick-driven spin-offs, and Gold on 3DS was an excellent compilation of the series’ best microgames, but Smooth Moves was the last time we had an all-new, traditional WarioWare game. With the Nintendo Switch boasting a variety of technological features for Wario to exploit in his next money-making scheme, there is no better time for the bad-tempered brute and his kooky friends to return.

I R ready to party

You’d be forgiven for forgetting all about this (or barely noticing it altogether), but at the bottom of the right Joy-Con is a small, smooth, black panel. This is an infrared camera, and it is by far the Switch’s most underused feature. Prior to the system’s launch, Nintendo held a Switch Presentation in 2017 wherein presenter Yoshiaki Koizumi showed off the capabilities of the IR technology, showing how it is able to detect the “shape, motion, and distance of objects in front of it.” Koizumi explained how it is possible for the hardware to detect hand gestures, and that users could potentially play a game of Rock, Paper, Scissors. To reiterate just how neglected this feature is, it took three years following Koizumi’s presentation for a title to release that included an actual Rock, Paper, Scissors minigame. That honor goes to Dr Kawashima’s Brain Training for Nintendo Switch and it’s still not available in the US!

Still, as late and as narrowly distributed as it is, the European release of Dr Kawashima’s Brain Training for Nintendo Switch did demonstrate just how responsive IR input can be. I have no doubt that the fictional folks at WarioWare Inc. could envision a variety of hand gesture-based microgames – how about quickly solving math problems by holding up a number of fingers, waving enemies off of the screen, or replicating specific hand-puppet shapes? 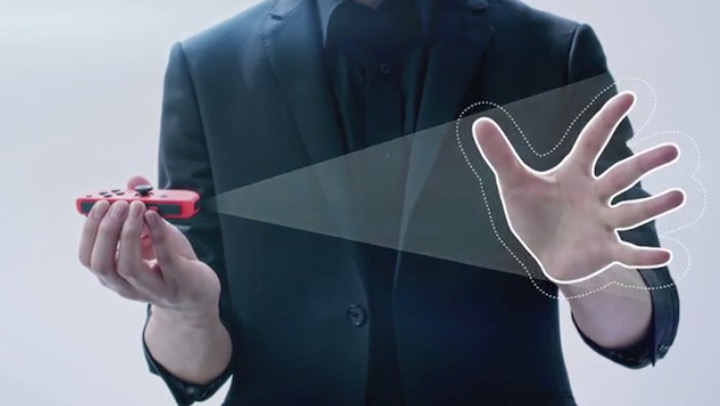 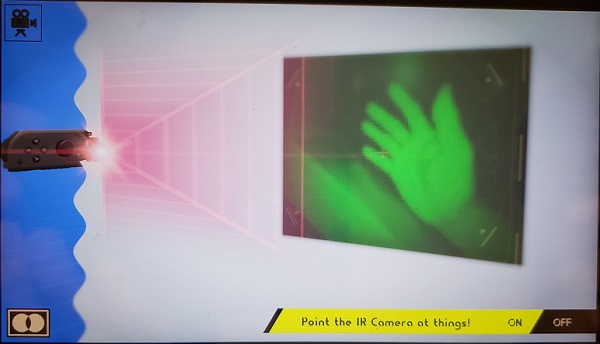 Your hands aren’t the only thing that the tech can recognize, of course. 1-2-Switch, as limited as its shelf life may be, had one minigame in particular that amused guests to no end every time I introduced them to the Switch. “Eating Contest” involves pointing the right Joy-Con at your face and opening and closing your mouth in quick succession in order to eat sandwiches. With its strange premise, quickly-paced presentation, and unusual input method, this is the closest I’ve ever felt to having an authentic WarioWare experience on the Switch. New microgames could require similar rapid-mouth movements from the player to make Wario chomp garlic, while others could demand a well-timed bite in order for one of Ashley’s conjured monsters to snag some prey in its jaws.

Add to this the IR camera’s ability to read heart rates in Ring Fit Adventure and allow players to reload weapons by tapping the sensor on their palm in the Resident Evil Revelations Collection, and there is a ton of potential ready to be explored within the wacky world of WarioWare.

There’s also the other criminally overlooked feature that lies deep within those Joy-Cons, the HD Rumble. 1-2-Switch once again gets major props in this department, particularly with its “Ball Count” minigame. This has players carefully handling a Joy-Con as though it’s a small, closed box containing an unspecified number of balls, and using the advanced rumble technology, participants must slowly tilt the Joy-Con to determine how many balls are inside. It feels so realistic that I can close my eyes and easily convince myself that I’m no longer just holding a game controller.

In the aforementioned 2017 Switch Presentation, Koizumi also demonstrated how the Joy-Con could simulate the feeling of a glass with ice cubes rattling inside, or being filled with water. It’s such an intriguing feature, and with the controller capable of emulating both solids and liquids, I’m certain there’s a world of weird, random, and gross objects and substances that WarioWare could force players to go literally hands-on with. Super Mario Odyssey and Ōkami HD also used nuanced vibrations to help players locate hidden spots and items while exploring the world, which I could see being used to help Wario dig for treasure in a metal-detecting microgame.

A new WarioWare announcement would be a very smooth move

Just last week, Nintendo asked fans via a survey if they would be interested in a new WarioWare game, seemingly trying to gauge just how much they would pay for a potential new title. It’s always important to temper expectations somewhat at this time of year when pre-E3 hype is constantly spinning wild speculation and rumors everywhere online, but it’s hard not to get excited about the idea that Nintendo may already be preparing for the big man’s return.

Variety is the key ingredient to a WarioWare game, and the Switch can provide that in droves. As well as utilizing the console’s exclusive features, players could still mash buttons, tilt analog sticks, and use motion and gyro controls just as they always have. There could even be a separate mode for when the Switch is undocked to make use of its touchscreen. There’s so much to praise about the Switch, with its outstanding first-party hits, extensive software library, and seamless portability, and yet, sometimes it takes a silly game like WarioWare to help us appreciate just what Nintendo’s hardware is truly capable of.

Mario, my dude, you know I love your parties. Still, give the guy another chance and let Wario host the next one; really, he’s not so bad once you get to know him. 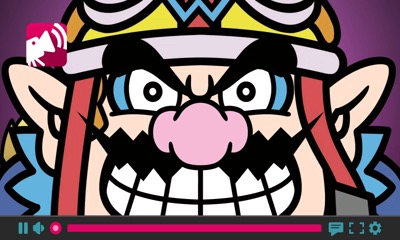