Nintendo platforms have seen a few Metal Gear ports and remasters over the years, from the GameCube’s Twin Snakes to the relatively recent Snake Eater 3D, and with that in mind you might consider Metal Gear Solid for the Game Boy Color to be no different. After all, it shares its name with the PlayStation game that made the franchise a worldwide hit, and in the late ‘90s it wasn’t unusual for third parties to downscale their games for the incredibly popular handheld device.

Yet, the game was only known as Metal Gear Solid in the West, thanks to the popularity of the console game that came out two years prior. In Japan the game was released as Metal Gear: Ghost Babel, and from the beginning of development it was designed as a non-canonical spin-off. Franchise creator Hideo Kojima only served as a producer, with his usual director role going to Shinta Nojiri, who went on to direct the similarly non-canon Metal Gear Acid games for the PSP. 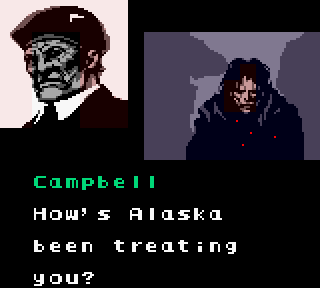 One of the few things the handheld title shares in common with its console counterpart is the opening, as both games begin with Solid Snake holed up in Alaska suffering from PTSD after facing off against Big Boss and his private army. It takes Colonel Campbell to persuade Snake to return to duty one last time, to take down a group of terrorists who have hijacked a new Metal Gear prototype. Pretty soon, Snake is uncovering government conspiracies and listening to dramatic death monologues, all in traditional Metal Gear fashion.

The Game Boy Color game even emulates the long cutscenes the series is known for, with surprisingly well drawn pixel art images that help add emotion to characters who otherwise would be tiny faceless sprites. However, the lack of voice acting, for obvious reasons, means the story is delivered through repetitive buzzing and a frustratingly slow text crawl. This was also a problem in the original Metal Gear games for the Japanese MSX2 system, but the script in the handheld title is much longer and more cinematic. 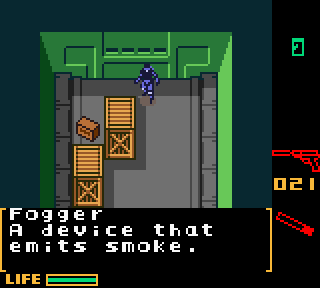 Of course, being a late 90’s game on a Nintendo system meant a few changes had to be made to better suit the more family-oriented platform. For example, Solid Snake’s equippable cigarettes, used to spot infrared laser traps, were instead replaced by the vague “Fogger” device. Moreover, there is no depicted blood or realistic gun violence, thanks to the small sprites and mostly static cutscenes. Strangely, despite all of this censorship, the game doesn’t hold back when it comes to the written dialogue, with one character describing mutilated bodies in detail and another giving a very enthusiastic endorsement of immolation.

When it comes to gameplay, the handheld title combines the perspective of the top-down MSX games with some more modern features from the PlayStation’s Metal Gear Solid. For example, whereas the MSX games had to rely on segmented maps, much like the original Legend of Zelda, the Game Boy Color allows for scrolling. This makes sneaking feel much more fluid and natural, and you really have to keep an eye on the Radar to make sure you don’t round a corner into an enemy’s cone of vision. 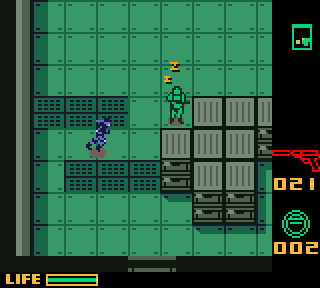 One aspect of the game that’s let down slightly by the hardware is the controls. The A button is used to punch and B is how you use your equipped weapon, this means crawling, an integral part of sneaking, is mapped to the Select button. Likewise, to access the Codec and switch weapons the player has to press Start and navigate a fiddly menu. Considering how often you need to access all of these features the game quickly becomes cumbersome, but it’s not impossible to adapt, and it is still impressive how they managed to transplant so many mechanics to the little handheld.

The game was also designed with portability in mind, being divided up into a mission structure for quick play. Each mission lasts around 10 to 20 minutes, and you are ranked on time, kills, rations used and times spotted. As a quick warning from me to you, during your first time through the game you’ll pretty frequently be called “Terrible,” thanks to strict grading in each category. The game encourages speed and stealth, which can task even the most seasoned Metal Gear veteran, and it would likely require plenty of practice runs to memorize all the guard placements and puzzles. 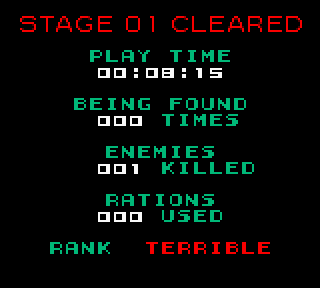 A particularly frustrating mission occurs halfway through the game, where Snake has to navigate a massive building almost entirely through the use of colored cardboard boxes and conveyor belts. The mechanic is cute and amusing at first, but eventually you’ll find yourself lost and going in circles unless you memorize the multiple pathways and destinations. The mission ultimately feels like a way of padding out the relatively short story mode.

That isn’t to say the game is low on content however, as it features plenty of VR missions that test not only your sneaking skills but also your proficiency with the many weapons found throughout the game. You also unlock “Special” missions after completing the main story, which are essentially more difficult versions of the story missions, with extra challenges like time limits and no-alert runs. It is only after completing all of these special missions that you unlock a hint at just how the game might fit into the canonical Metal Gear Solid series.

Metal Gear Solid for the Game Boy Color is an interesting novelty, released in a time before the franchise became as endearingly convoluted as it is today. As a unique standalone game it works not only as an entry point for newcomers but also as an intriguing experiment for fans. Unfortunately, the game has never been re-released on the 3DS Virtual Console, and the original cartridge might, ironically enough, be tricky to find. Still, for those who want to experience a slightly different Metal Gear game it is worth seeking out.