March 2020 was a wild ride that I personally never want to repeat ever again. Yet, there was a major bright spot back then and it was the release of Animal Crossing: New Horizons for the Nintendo Switch. In the coming weeks (and months), the Animal Crossing series skyrocketed in popularity and fanbase to a level I still can’t believe to this day. Even though it’s 2021 and about a year and a half since New Horizons was released, the production train for merchandise and official products hasn’t slowed down. Manga for Animal Crossing isn’t a new thing either — there’s been a number of manga series that date back to the early 2000s. Usually, these don’t get an official localization release, but thankfully that’s changing now. Viz Media announced earlier this year that they would be localizing Animal Crossing: New Horizons – Deserted Island Diary in English and the first volume is ready for release. 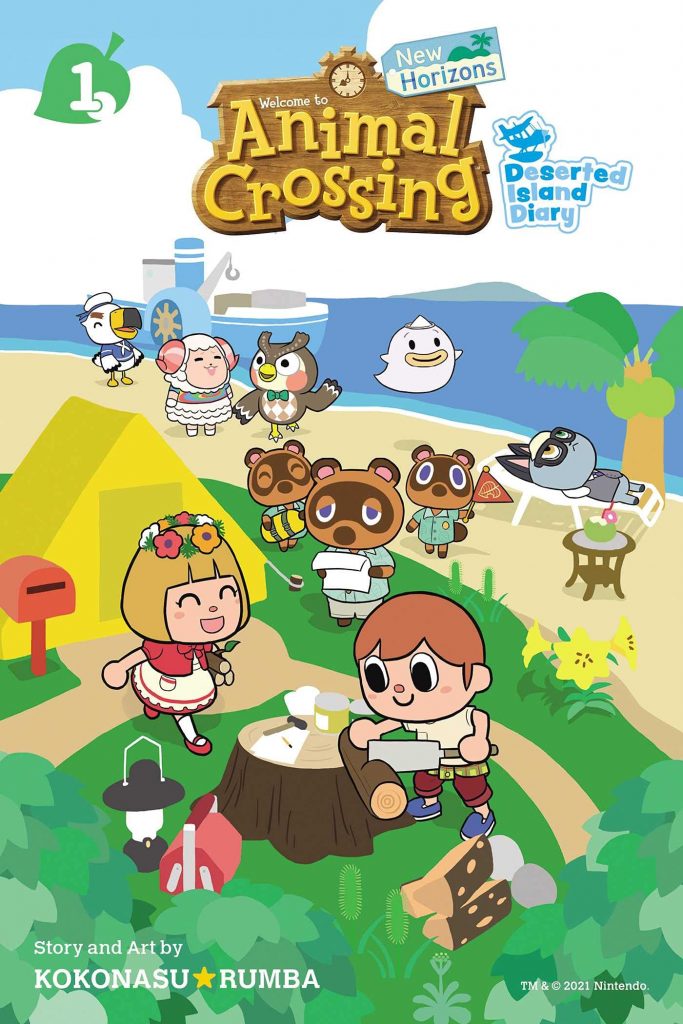 Initially published in CoroCoro Comic in Japan, these deserted island adventures penned by KOKONASU☆RUMBA are comics of the comedic gag variety and aimed at a specific age group: elementary school students. Not knowing that this is the direction the manga goes in may surprise fans — you’re not reading about some random villager’s journey on crafting the perfect island getaway. No, you’re getting four hapless idiots (each with their own quirks) that will be quickly causing chaos for Tom Nook.

Volume 1 consists of five stories detailing the adventures of four villagers that find themselves involved in Nook Inc.’s Desert Island Getaway Package — Coroyuyki, BenBen, HimePoyo, and Guchan. Coroyuki (billed as the protagonist) is obsessed with fishing and consuming fish, BenBen has his nose in a dictionary more often than not, HimePoyo is the bells rich “princess type” that can get Timmy and Tommy (or anyone) to do her bidding, and Guchan would rather be sleeping and communicates in snot bubbles. Thanks to this quartet’s… charms… they bring out the best of Animal Crossing’s NPCs.

This setup allows the NPCs to be comedic foils to the villagers, for the most part. Tom Nook is always trying to play off the zany shenanigans as straight as possible until he loses it via an outburst. Timmy and Tommy tend to go with the flow, helping no matter what’s happening. Blathers, Wisp, and Gulliver appear in specific stories and their mannerisms are on par with their video game New Horizons selves. Deserted Island Diaries just pushes certain characteristics for laughs — like Wisp being scared of other ghost-humans. And it wouldn’t be Animal Crossing without any of the 400+ possible animal neighbor friends! Random neighbors will pop up in each story — Bill, Dom, Raymond, and Lucky — to either inadvertently add to the eccentric free-for-all or to plunge the story into further mayhem (Raymond, just… Raymond). 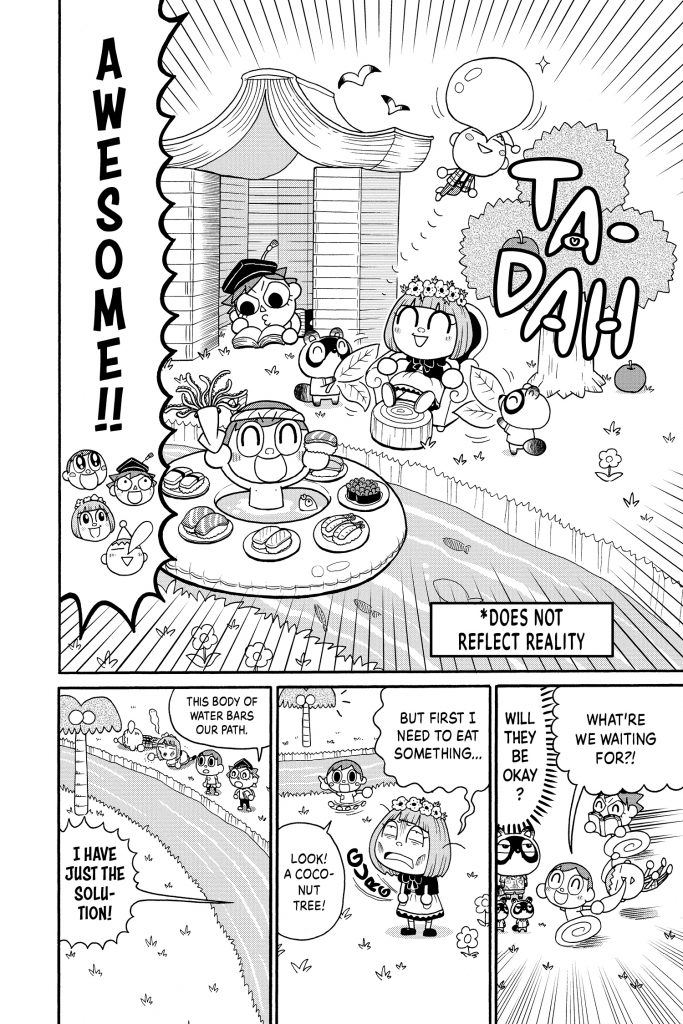 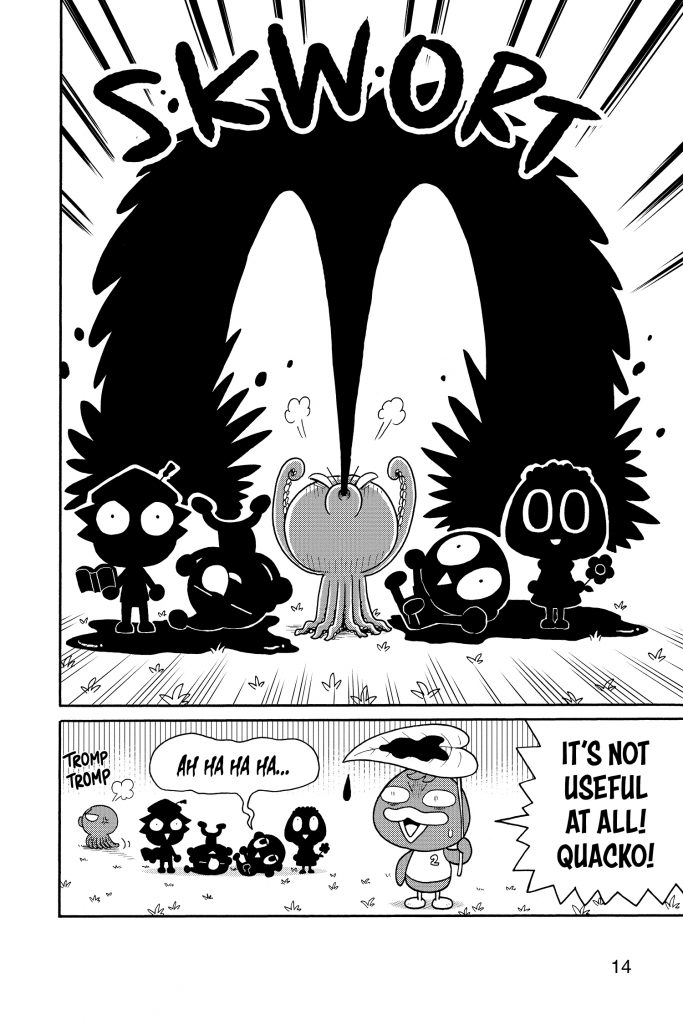 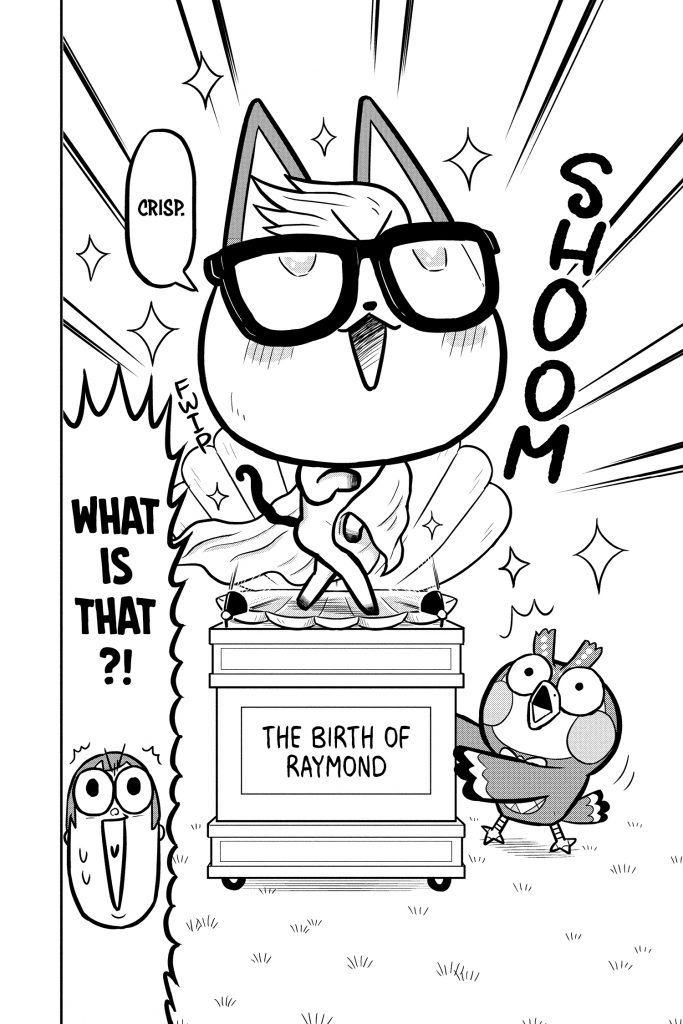 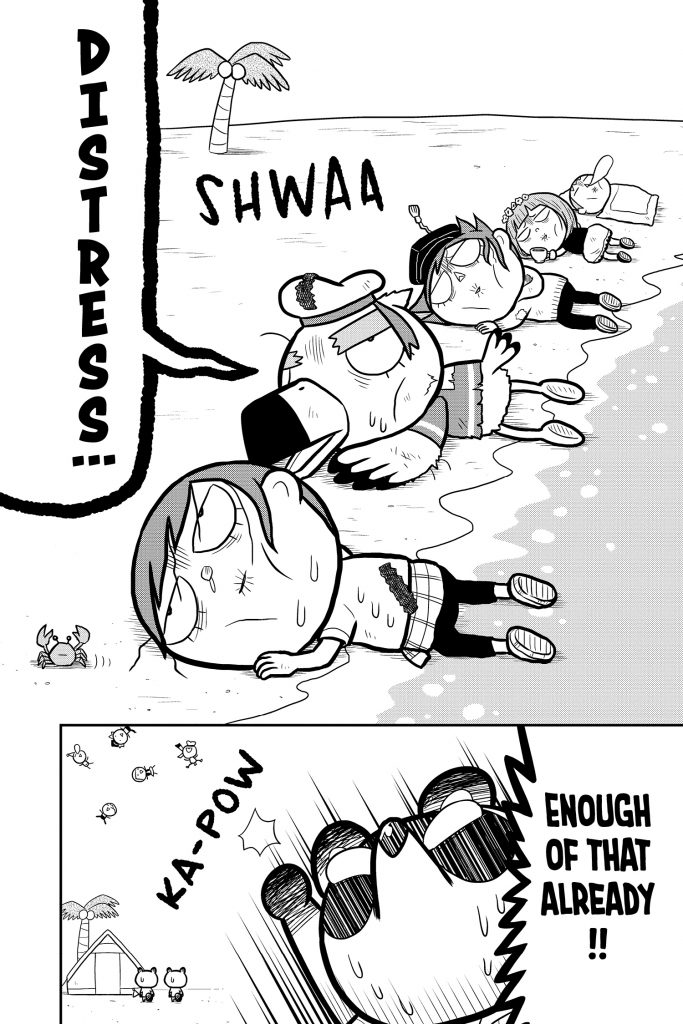 Some fans may find Coroyuki and his friends rather annoying to a dislikable level (I didn’t — they’re hapless idiots who play their roles well), and if so that’s fine. The interactions with canon New Horizons characters will easily counter those feelings. You’ll love Dom, Lucky, Raymond (unless you’re a die-hard Raymond fan), and more thanks to that. They steal the show throughout the 78 pages.

As for the other 50 pages of Volume 1, other than a few advertisements of other Nintendo-themed manga that Viz Media has localized and a page on how to read the manga, there’s a mix of comics and game tips. The sections are divided into Animal Guide, Island Life Guide, Happy Harvesting Life (short comic), and Bonus Diary (sketches and a comic about KOKONASU☆RUMBA’s New Horizon island). It’s a nice mix, especially since the manga is meant for all ages. Major Animal Crossing fans might not need the game tips, but each tip or page about a particular character comes with a four-panel comic. Here, it’s an NPC showcase. 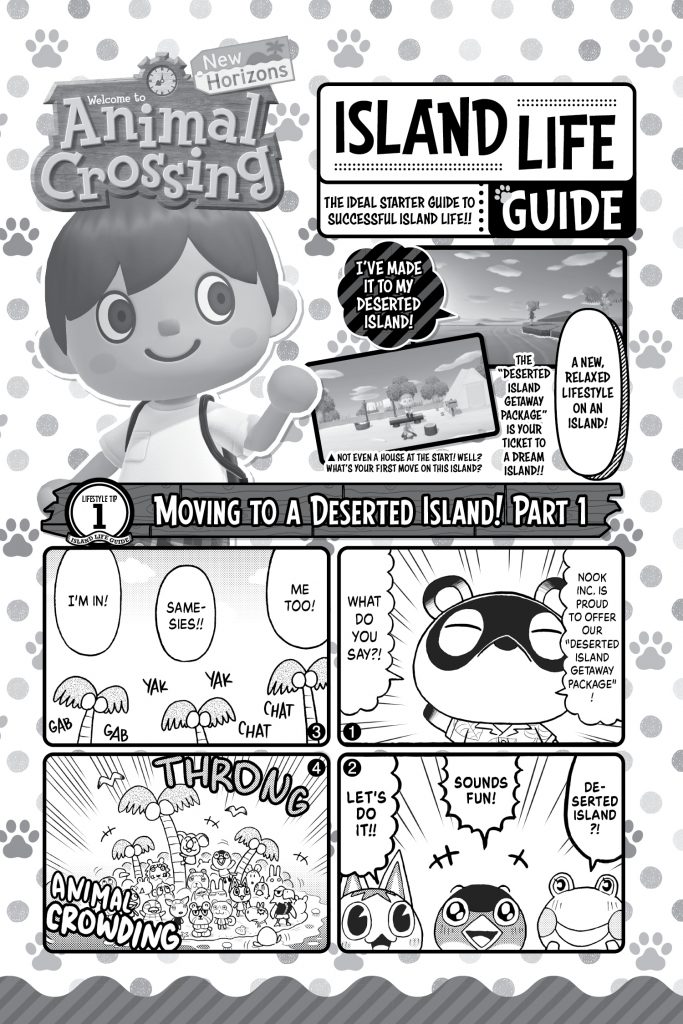 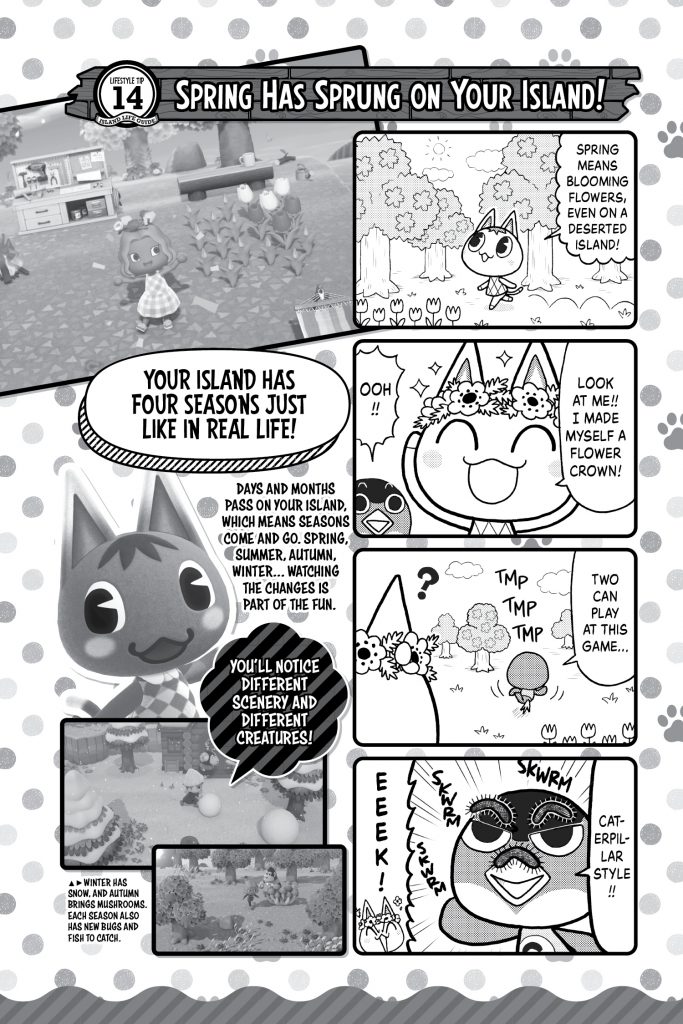 Mabel, Saharah, C.J., Isabelle, Wilbur, Harvey, Knox, Marcel, Ribbot (A+ taste, thank you), Gaston, Limberg, Chester, Al, Joey, Rosie, and more will be found here. Some may show up in a panel or star in the comic, regardless, they’re all funny. Plus, for younger readers unfamiliar with the right to left format,  some panels are numbered for the reading order.

On the technical side, I do have to congratulate Viz for not only localizing the title, but the way in which they produced it. The lettering is well done, especially with tackling Guchan who talks in snot bubbles. I was able to compare some pages of the Japanese version to the English version, and the localization team did a great job of keeping that quirk in English. So thank you for taking the time to pick out a bubble-like typeface, outline the type, and then go in and edit it so that the letters connect together — and it appears as a continuous snot bubble. Not only that, it blends in so well! I thought Guchan’s first “Hullo” was how it was presented in the Japanese version and that wasn’t the case. Bravo!

Overall, Animal Crossing: New Horizons – Deserted Island Diary, Volume 1 hits its comedic marks. Meant for all ages, it’s a great (and official) piece of reading material for young Animal Crossing fans. For us diehards who date back to the GameCube version (or to the time where we thought Nintendo would bring it over for the Nintendo 64), it’s enjoyable. In fact, some of the jokes line up with ones we were making when the Animal Crossing: New Horizons first came out. So if you want to see how Gulliver will always be left on read when he sends out his S.O.S. texts messages or Tom Nook’s business persona slip due to Coroyuki and friends, pick up a copy.