This week’s Nintendo Direct introduced us to Square Enix’s HD-2D follow up to Octopath Traveler, tentatively titled “Project Triangle Strategy.” They wasted no time giving us a sample of this new project, with a demo going live after the Direct had finished, with the promise of a survey for feedback to come at a later date. Having now played the demo, I can easily say that I’m looking forward to the final product, and I’ll likely be spending even more time with the demo until the final product arrives. To give players the full experience, the demo is taken from chapters in the middle of the game, starting specifically with Chapter VI, with adjusted difficulty to allow for a complete experience of the game’s mechanics

Upon starting the demo, it’s mentioned that players may be lost, story-wise, due to the fact that they are dropped in the middle of the action. Helpfully, you can press X at any time during a conversation to bring up a profile, on who is talking, complete with a display of the gorgeous character art. This profile is pretty simple, only showing their name and title beside the art, but it allows players to keep track of who is who: where they’re from, and their relation to the greater warring factions of the game. Despite the warning that players may be confused, I was able to piece together what was happening with the wider story fairly quickly during the demo’s opening story scene, and though the story seems like a typical fantasy-RPG affair, I still found it fairly engaging. 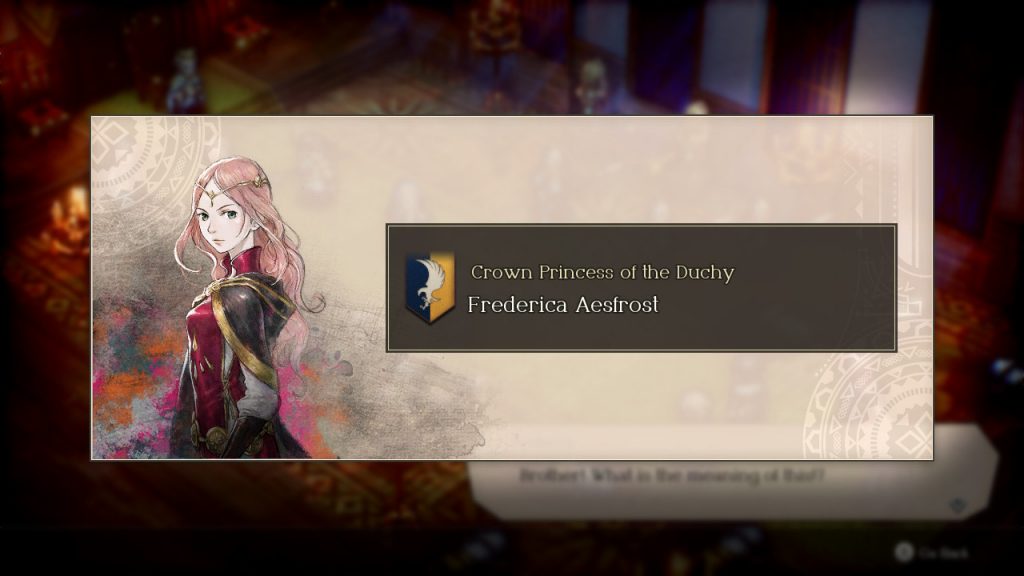 Between story scenes and battles, you’re given the chance to explore the world around you and talk to characters on the field. This exploration can lead to item discovery, character information, and even information about the battlefield you can use to your advantage later. It’s worth it to explore as much as you can, as even during the first exploration opportunity there is more than meets the eye on an initial pass through.

Keep in mind that camera angles are a great way to hide secrets – you can rotate the camera freely during exploration, uncovering new pathways and hidden items, so make sure you explore thoroughly in order to discover all of the secrets that the map has to offer. During exploration, you can speak to characters that will offer you branching choices within their dialogue, and the choices you make are divided among three convictions: Utility, Morality, and Liberty. When the choices are presented it’s not always clear which choice fits which parameter, and even after choosing, you are not told the answer. These choices can affect your game, such as influencing which characters can join your party. Certain exploration scenarios will also have you and your party voting to make important decisions. You’ll be asked to explore the town to gather information that can be used to sway the votes in a certain direction, changing the way the story plays out. 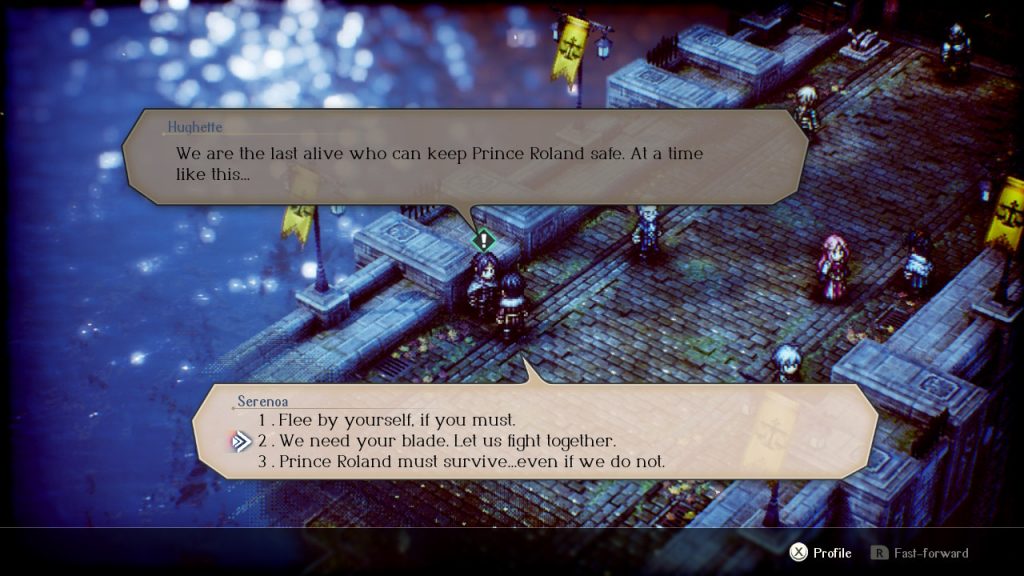 While the basis of the combat will be familiar to fans of Fire Emblem, with your units fighting enemy units on a grid-based battlefield, there are no player or enemy phases. When your units will take action depends on their individual speed stat, giving Project Triangle Strategy more of a “real-time” feel and helping the combat feel more engaging.

It should also be noted that units can’t counterattack unless expressly stated by one of their abilities or if the ability is granted to them by an ally. The direction your units are facing matters as well – for example, units that are attacked from behind will take additional damage, likewise, attacking enemy units from behind will guarantee a critical hit. After making an action you can select which direction you would like that particular unit to face, allowing you to strategize in order to protect your units from additional harm. In fact, there are a lot of details to the combat system that help Project Triangle Strategy feel incredibly, well, strategic. More examples of the game’s strategic intricacies include height differences between terrain offering advantages or disadvantages, positioning two units on either side of an enemy offering an opportunity for a double strike, and moving certain units on a path past enemies on the way to their target can sometimes result in an “opportune strike,” allowing you to damage enemies other than the one you’ve targeted. There are countless more battle strategies in the demo alone, giving Project Triangle Strategy’s combat an incredible sense of depth. 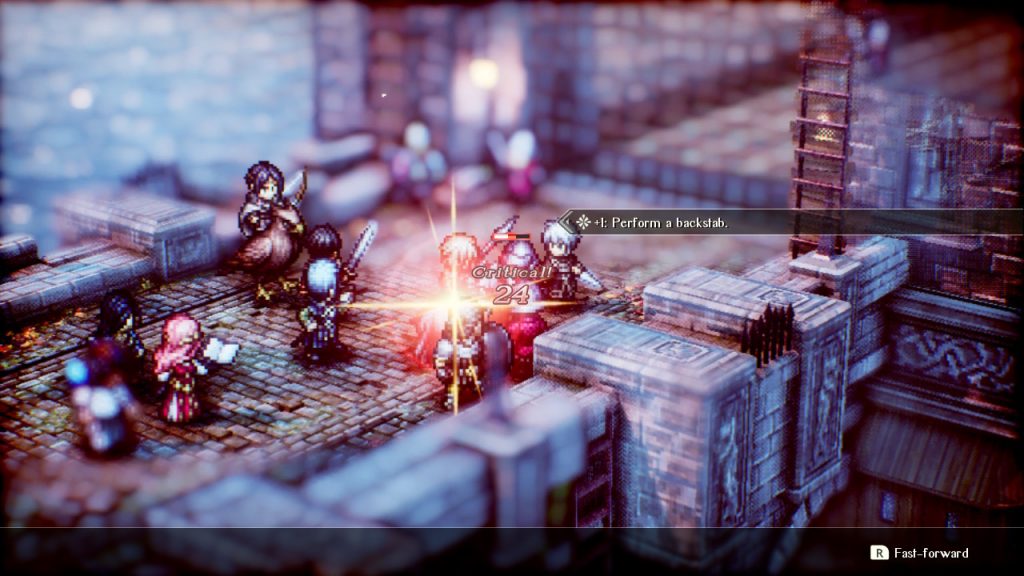 The biggest part of the demo that feels to be lacking is the large amount of cutscenes that take place in between battles, with multiple cutscenes returning you to the world map afterward, with somewhat lengthy loading times in between. The cutscenes themselves are fine, but with the world map and loading screens in between them all, it somewhat disrupts the flow of the demo, especially since some cutscenes you’ll view are only a few seconds long. The dialogue in these cutscenes is also written with intentionally archaic words at times, such as “demesne” instead of “domain” and “gaol” instead of “jail,” despite the near-identical pronunciations and meanings. It is a solid choice as far as world-building goes, but it may have some players yearning to pull out a dictionary. Luckily, there is a feedback survey coming out to players of the demo at some point in the future, which will allow the Project Triangle Strategy team to really hone in on what players want out of this game.

All in all, I really enjoyed my time with the Project Triangle Tactics demo, and it’s quickly become one of my most anticipated Nintendo Switch games on the horizon. The name leaves a bit to be desired, but maybe Square Enix will come through for us and rename it something more alliterative and appealing, like Triangle Tactics, or even Tritactics Traveler, to keep it more in line with Octopath Traveler thanks to the two sharing an art style and engine. Whatever Project Triangle Strategy ends up being called, I’m sure that it will be another HD-2D hit — and I can’t wait.